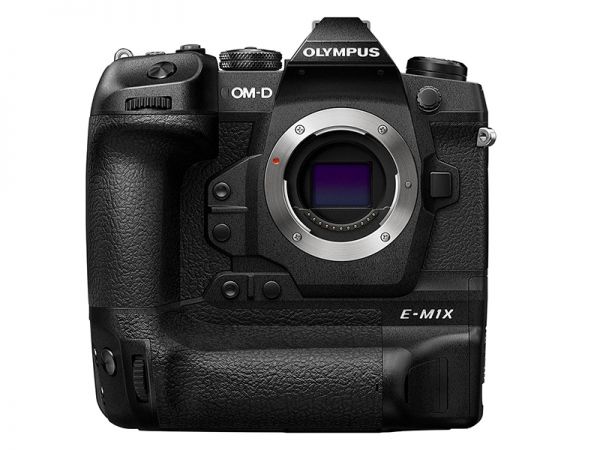 The autofocus system is borrowed from the E-M1 Mark II, with the same number of all-cross-type phase detect points—121—and both the joystick and touchscreen can be used to set focus points. Its autofocus tracking system differs from that in the E-M1 Mark II, however, with an AI-powered Intelligent Subject Detection system that claims to detect various types of moving subject, including cars, motorcycles, airplanes and trains—but we’re always optimistic that a future firmware update will extend that to sharks, sea lions and cephalopods.

The same High Res Shot mode as in the E-M1 Mark II is on offer in the E-M1X—the camera shifts the sensor slightly to enable it to capture 80MP images when using a tripod—but on the E-M1X there’s also Handheld High Res Shot Mode, which aims to allow you to do the same thing without a tripod. On the video side, UHD 4K/30p recording is from the full sensor width, while Full HD capture is up to 60fps (52Mbps). There’s also a 120fps High-Speed Movie mode available in Full HD (outputting 60p/50p slow-motion footage at 50Mbps). Like the E-M1 Mark II, the HDMI output is 8-bit 4:2:2 color.

There’s a 3-inch touchscreen LCD on offer as well as a large 2.36-Mdot EVF, and both the SD card slots support UHS-II media. The dual battery compartment accepts two batteries of the type that fit the OM-D E-M1 Mark II, which should give you up to 870 shots. 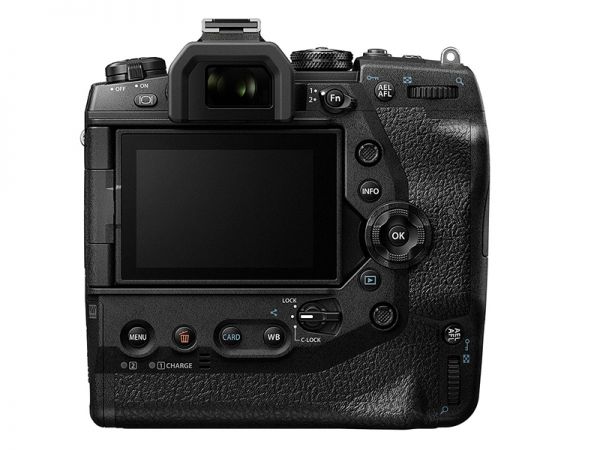 To meet demands from professional users who place importance on a secure grip during shooting, the OM-D E-M1X features integrated vertical grip construction, designed to provide an improved grip with a deep finger rest whether holding the camera horizontally or vertically. The ergonomic design reduces fatigue when shooting for long periods of time.

The layout, shape, and height of all buttons and levers have been completely redesigned to enable users to concentrate on shooting through the viewfinder. A multi-selector is included in both the horizontal and vertical positions so that users can quickly shift focus areas while looking through the viewfinder. A new C-LOCK lever allows the user to select and disable numerous buttons and dials on the camera when in the vertical or horizontal position to substantially mitigate any the risk of accidental changes in settings. 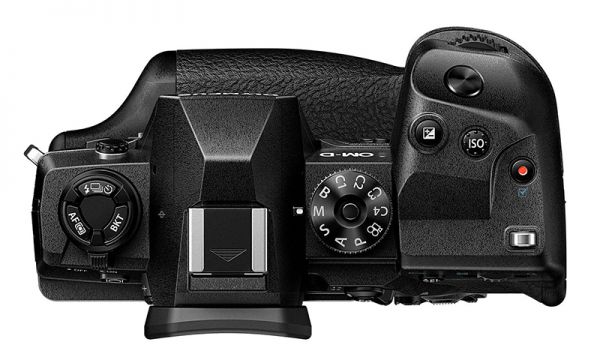 The viewfinder features a new optical design using an industry-leading magnification of 0.83x (35mm equivalent). This four-element configuration designed with aspherical and high reflective index lenses provides a clear, distortion-free display right up to the edge of the viewfinder. As found on the OM-D E-M1 Mark II, a 120 fps (progressive scan) high-speed frame rate with a 0.005 second latency are provided for stress-free moving subject photography.

The OM-D E-M1X clears Olympus’ in-house splashproof tests that are far more rigorous than IPX1 water ingress testing. The body is designed for shooting in the severe conditions professional photographers often find themselves. Dustproof, splashproof, and freezeproof (14°F / -10°C) performance is maintained even when the remote cable, microphone, and headphone jacks are in use, enabling shooting that is not affected by poor weather. A new coating is used on the Super Sonic Wave Filter, which vibrates at 30,000 times per second to remove dust and dirt, boosting dust removal effectiveness by 10% compared to previous Olympus models. The OM-D E-M1X also features durability and reliability to put pro photographers’ minds at ease, including construction that dissipates heat when shooting video and during high speed shooting in very hot conditions, which can typically cause the temperature to rise and limit functionality, as well as a shutter life actuation counts of 400,000[6].

The OM-D E-M1X is equipped with a cartridge battery insertion system with the capacity for two BLH-1 lithium-ion batteries (also used in the OM-D E-M1 Mark II). Users can capture up to approximately 870 shots[7] and easily replace the batteries even when the camera is attached to a monopod or tripod. The camera also supports USB-C power delivery from a maximum 100 W USB-C standard power source with no special adapter required. This makes it possible to charge the two BLH-1 batteries in the camera body in approximately two hours. 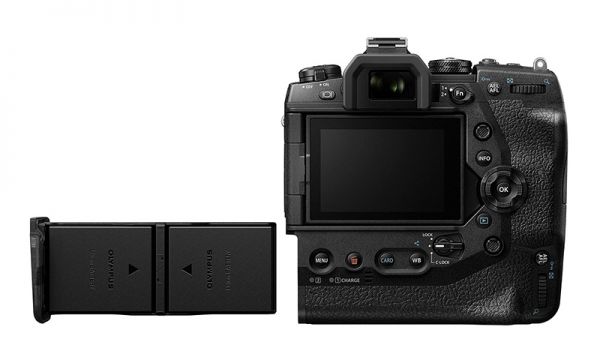 A multi selector is included in both the horizontal and vertical positions on the OM-D E-M1X allowing users to quickly shift the AF area while looking through the viewfinder. A distinctive attribute of this joystick is that it allows for diagonal movement of the AF point, where most other cameras only allow for left, right, up and down movement, and in only one direction at a time. This feature makes it possible to smoothly shift AF areas during sequential shooting and video recording.

Various autofocus settings are available on the OM-D E-M1X to meet the needs of professional photographers, including multiple AF Target Modes, AF area position settings when holding the camera vertically or horizontally, and turning the focusing ring in C-AF AF to instantly switch to manual focus using C-AF+MF Mode. The new 25-Point Group Target and Custom AF Target have been added to the available AF Target Modes for greater operating freedom.

The OM-D E-M1X features high-speed sequential shooting at a maximum60 fps for capturing scenes in high definition that even the human eye cannot see. Both the 60 fps high-speed continuous shooting in AF/AE Lock, and maximum 18 fps continuous shooting with AF/AE Tracking can be used in Silent Mode for shooting a variety of activities, performances and events where the photographer does not want to disturb others with the sound of the shutter.

Pro Capture Mode records up to 35 frames retroactively from when the shutter button is released with no blackouts (image loss) during shooting, recording at 20 million pixels and offers support for RAW capture. This feature has received high praise from professional photographers since its introduction on the OM-D E-M1 Mark II, and is effective for capturing artistic images of subjects that move unpredictably.

In addition to ultra-high-resolution maximum 80M[9] High Res Shot images that can be captured using a tripod, Handheld High Res Shot Mode is now available on the OM-D E-M1X, in response to many requests received from professional photographers. This feature is particularly useful for capturing high-definition shots in locations where it is impossible to use a tripod, including when moving from place to place, such as hiking. 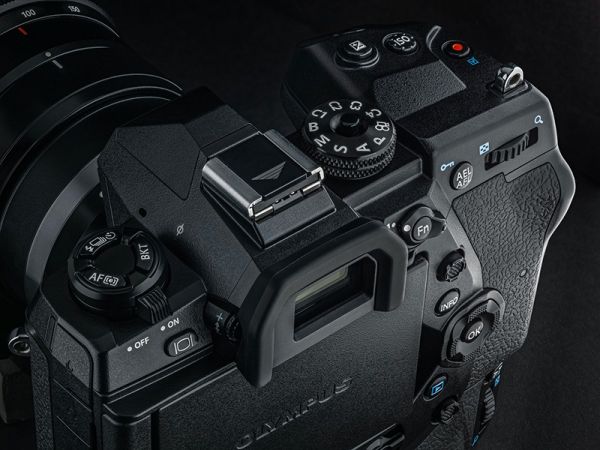 Artificial Intelligence (AI) based Deep Learning technology was utilized to develop new algorithms for the Intelligent Subject Detection AF feature. It detects three different types of subjects, including motorsports, airplanes, and trains, focusing on and tracking the optimal area. For example, it sets pinpoint focus, locking onto the driver’s helmet during motorsports, automatically detecting the subject, enabling improved autofocus precision so users can focus on the composition.

The OM-D E-M1X’s new gyro sensor enables superior image stabilization performance, delivering a maximum of 7.0 shutter speed steps of compensation performance[10] when using the camera body stabilization alone, and the world’s highest 7.5 shutter speed steps of compensation when combined with the stabilized M.Zuiko Digital ED 12-100mm F4.0 IS PRO lens. This feature makes handheld shooting possible at lower shutter speeds than ever before, which is perfect for nighttime and indoor shooting. 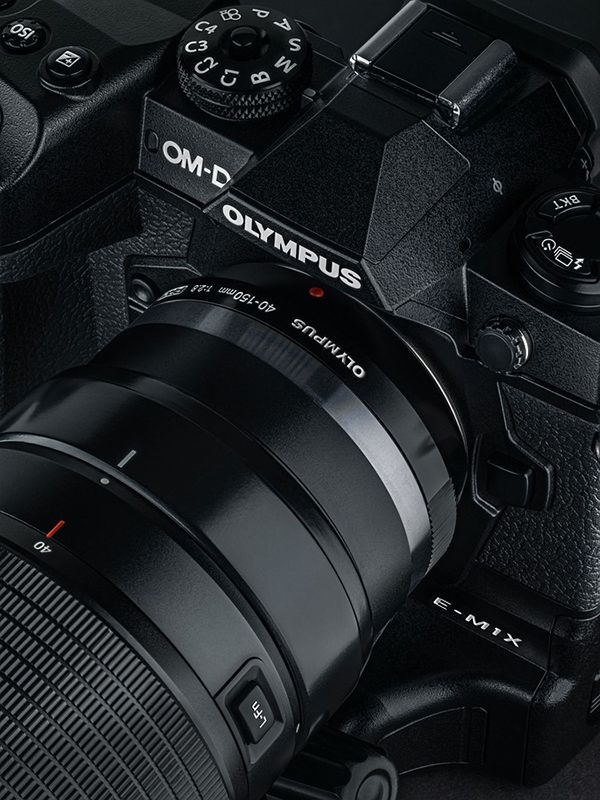 FL-700WR Electronic Flash is a high-performance wireless radiowave shooting compatible electronic flash. During wireless shooting, it can function as a commander or flash with built-in receiver. The compact, lightweight design delivers excellent portability with high intensity at a maximum guide number of 42[11] (ISO 100/m). The dustproof, splashproof, and freezeproof (14°F/–10°C)[12] performance offers reliability when shooting in a variety of environments including rain, when paired with the OM-D E-M1X, and other splashproof and dustproof body and lens combinations. Full flash intensity is possible with an approximate 1.5 second[13] charging time for comfortable, easy shooting. Because charging time is short, sequential flash photography[14] at 10 fps is possible. 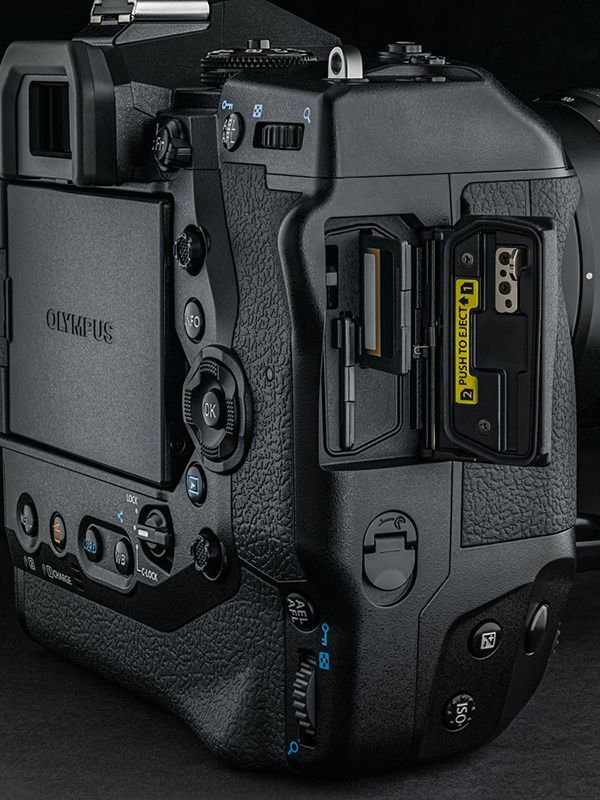 Wireless Commander FC-WR and Wireless Receiver FR-WR can control multiple flash units remotely from the camera, enabling versatile wireless flash photography. As is the case with the Electronic Flash FL-700WR, dustproof, splashproof, and freezeproof (14°F / -10°C) design allows use in a variety of fields. When paired with weathersealed cameras, lenses, and flash units including the FL-700WR or high-capacity Electronic Flash FL-900R, users can perform wireless flash photography comfortably even in the rain. The commander can connect to three groups and an unlimited number of flash units. Users can also select which group to fire and not fire and configure the flash intensity.

This new image management software delivers authentic image viewing and editing functions. RAW processing preview speed is now faster to streamline the post-shooting workflow. The rating function has also been improved for speedy selection of the best shots from large collections of images. A multi-window environment is now supported along with other comfortable controls for a more satisfying work process. Olympus Workspace can be downloaded free of charge for users who own an Olympus camera. 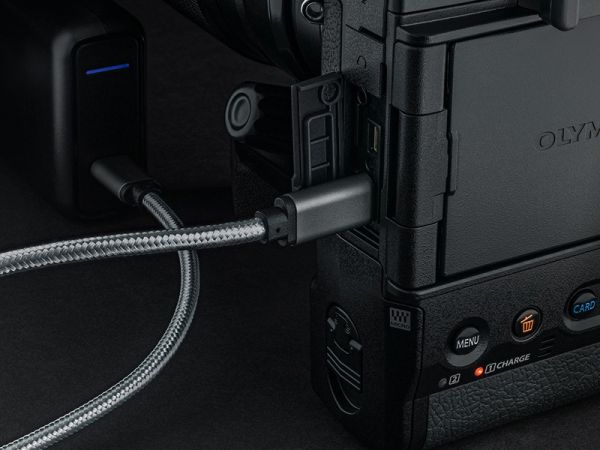