Oak Bluffs Monster Shark Tournament, Martha's Vineyard
By Jason Heller, July 25, 2008 @ 02:00 AM (EST)
Editor's Note: Thank you to Shara Teter from the New York Underwater Photographic Society for heading up to Martha's Vineyard to cover the Oak Bluffs Monster Shark Tournament. Shara is one of many passionate scuba divers and underwater photographers who is helping to do her part to create awareness of the plight of sharks. In the grand scheme of things, Shark Tournaments, like the Oak Bluffs Monsster Shark Tournament in Martha's Vineyard and those listed at the end of this article, are a small part of the physical problem compared to commercial fishing and shark finning - albeit far more sharks are killed than what the public is led to believe. Shark tournaments are engrained in the culture of many of the small towns that host these events, which have become part of their local economy. This is their main excuse for continuing, which is not morally acceptable amid the unsustainability. These shark tournaments glorify the killing of sharks and make the efforts for their protection more difficult. 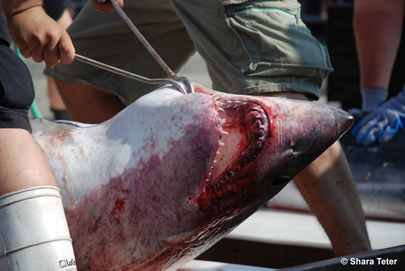 At 3:30 pm on July 18, 2008 the weigh station was officially opened at the 22nd Annual Oak Bluffs Monster Shark Tournament on Martha’s Vineyard, Massachusetts. The crowd inched closer as the first of many dead sharks was hoisted up for weighing.  I was shocked by the gruesome scene that quickly followed.  Within moments of my arrival three sharks had been weighed, strung up by the tail and hung upside down from a wooden gallows reminiscent of those used in medieval times for public hangings. As each shark was lowered back down to the ground, they would be struck by a gaff (a large iron hook attached to a pole) and drug across the asphalt to a small platform a few inches off the ground.  Awaiting them were many sharp knives.  The sharks were then gutted, finned, and sectioned off into pieces.  Shark parts were everywhere, and blood was too.  Internal organs were strewn about, some being placed into buckets by scientists for weighing.  It was traumatizing for this adult shark lover, so I can’t imagine what affect the sight had on the children watching. 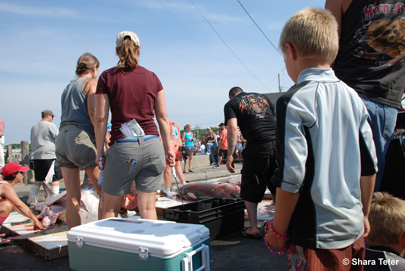 Thresher, Mako, Porbeagle – these were the species that “counted for a score,” according to tournament rules.  Yes, people were killing sharks for sport and money, so there had to be a way to keep score.  The atmosphere was a mixture between that of going to a circus and of a crowd gawking at the scene of an accident.  Fascination, curiosity, and entertainment seemed to be what had turned this quaint island town into the site of a bloody glorification of shark killing.  When the weight of a large Thresher was announced over the loud speaker, the men who killed it high-fived and fist pumped as to say, “I caught big fish – I big man now.” 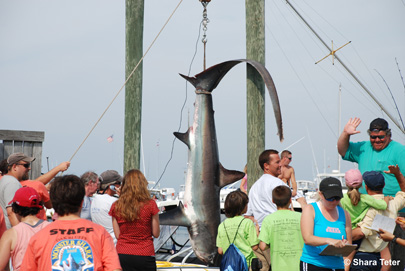 I felt as though I had traveled back in time as the announcer, waiting for one shark to be taken down and the next to be hung up, began asking trivia questions from the infamous movie Jaws.

Announcer: “What was the name of the boat?”
Twelve year old child behind me: “Orca.”

Announcer: “Who was the captain of the boat?”
Twelve year old child behind me: “Quint.”

Announcer: “What type of shark was killed first and thought to be the possible culprit?”
Twelve year old child behind me: “Tiger Shark!” 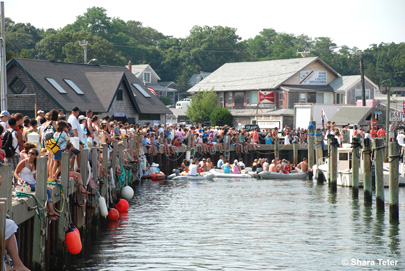 I was surprised by this young man’s Jaws movie knowledge almost as much as by the inordinate amount of small children surrounding me.  The walkway was littered with kids, ages 2 and up.  I heard a young boy, no older than five, say that when the blood gushed out of the shark that was the worst thing he’d ever seen.  Mom stood by, gazing at slaughtered shark parts, and offered no response.  Another woman mentioned that she was having fun, and seemingly at an attempt of vindication said, “there are sharks everywhere.”  Her companion responded with an “I’m sure.” 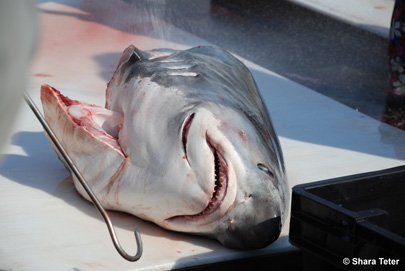 It seems like the crowd needed a slightly different trivia game:  Did you know that in recent years, it has been estimated that anywhere from 26 to 73 million sharks are killed per year?  Some sources even estimate numbers of up to 100 million sharks killed each year.  Did you know that the United States averages 16 shark attacks per year and slightly less than one shark-attack fatality every two years (for reference, in the coastal U.S. states alone, lightning strikes and kills more than 41 people each year)?  Did you know that a large portion of the sharks killed have their fins sliced off while they’re still alive and are then tossed back into the sea to die?  Did you know there is a black market for shark fin, and that shark fin soup is a status symbol in many Asian countries?  Did you know that oceanic shark populations have decreased 50-90% world-wide depending on the species?  The tournament’s 3 species that “counted for a score” are down 75-90%.  According to the International Union for Conservation of Nature (IUCN) the Thresher has plummeted 75-80% in the past 30 years.  In that same time span the Porbeagle population has dropped 90% and the Mako 75%. 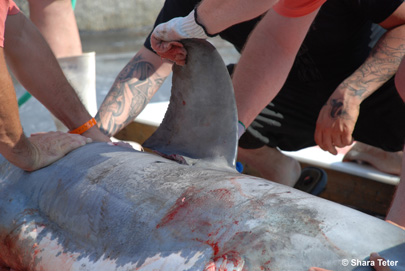 With studies showing that the ramifications of these drastic population losses are significant and costly to the entire ecosystem, don’t you think maybe it’s time to re-evaluate?  Perhaps after 22 years of shark slaying we should question the motives and logic to holding a shark tournament in New England waters.  The sharks are paying the price for our amusement, and it has gotten to the point where they can no longer afford to do so.  We must ask ourselves if our actions are responsible; if our actions are kind. 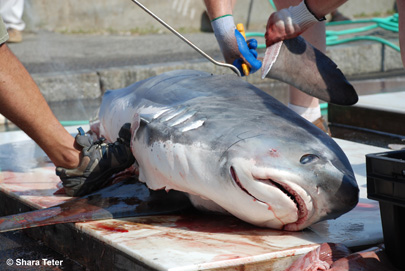 Also, we’ve come so far in the fight for the humane treatment of animals, I couldn’t help but wonder why suffocating and gaffing sharks to death remained acceptable to so many. It blows my mind that people put a hook into the water until it rips through the mouth of a shark, yank the animal around for a couple hours, suffocate it or gaff it to death, hang it up at the gallows, and then chop it into pieces and call it fun.  There was a group of people at the event who shared that same sentiment—they were wearing Humane Society T-shirts and educating those who would listen.  It was encouraging to see America’s Next Top Model judge Nigel Barker sporting one of those shirts in support. 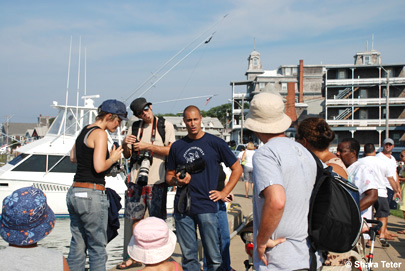 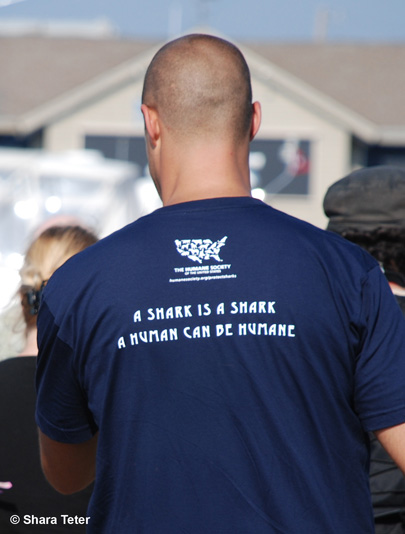 Some fishermen who catch shark for sport try to diverge attention and escape responsibility for their actions by pointing the finger at commercial fishermen, saying that they are doing the real damage.  It reminds me of when a six year old gets caught hitting his brother and points saying, “he started it.”  While there may be some truth behind the statement, it doesn’t take away from the fact that the actions of those doing the pointing are unjust and wrong.  The role that shark tournaments play is not a positive one.  They glorify the killing of amazing animals, many which are vulnerable or threatened, and bolster the negative and incorrect perception of sharks as the enemy, as an invaluable commodity that may be killed on sight.

I’m not going to write a scientific paper right now about how all of this affects you, your children, and your grandchildren.  Instead here are some key facts that you can piece together for yourself.  Sharks are the apex predator of the ocean.  Apex predators are key to sustaining the functionality and health of an ecosystem.  An ecosystem consists of all the organisms (plants, animals, and micro-organisms) in an area, interacting with each other and all of the non-living physical factors of the environment.  Examples of these physical factors are oxygen and carbon dioxide.  More than 50% of our oxygen supply is provided by tiny organisms called phytoplankton that live in the ocean.  Also, according to a 2005 study—ironically involving Woods Hole Oceanographic Institute, a ferry ride away from Oak Bluffs—the ocean acts a carbon dioxide sink, “absorbing about one-third of all human-generated carbon dioxide emissions to date.”  As sharks continue to disappear, natural systems are thrown off-kilter and imbalance is created.  This imbalance proves costly. 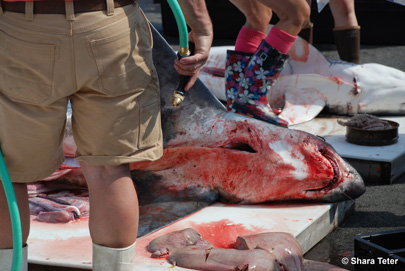 In short we depend on our oceans.  Sharks play a large role in keeping the balance in those oceans.  In many ways, we depend on the shark, but we are killing them for fun, sport, and money.  The celebration of dead sharks, suffocated and bludgeoned by gaffs, is not a step in the right direction—ethically or environmentally.  If you are wondering what you can to do to make a difference, you can start by contacting those in charge of shark tournaments asking them to cease and desist the senseless killing of these magnificent creatures.  You can also sign up for e-mailing lists and make donations to organizations like SeaShepherd, WildAid, the Ocean Conservancy, Oceana, the Humane Society, and SharkSavers,.  Sign on-line petitions that support the conservation of sharks.  Listed below are links to help you get started.  It’s up to us to save our sharks.

Below is a list of the major shark tournaments and contacts at their local chambers of commerce. Please do your parrt and contact them. Let them know that you will broadcast the negative practice that their town endorses and glrofies - that you will do your part to curb tourism dollars from entering their jurisdiction. Let's help educate them about the plight of sharks and the need for the visible support of their protection. Point out their ethical responsibility to become part of the solution and let them know that otherwise they are part of the problem.