New Study: It Only Takes Hours for Billions of Plastic Nanoparticles to Accumulate in Marine Organisms
By Ian Bongso-Seldrup, December 4, 2018 @ 08:00 PM (EST)
Source: University of Plymouth 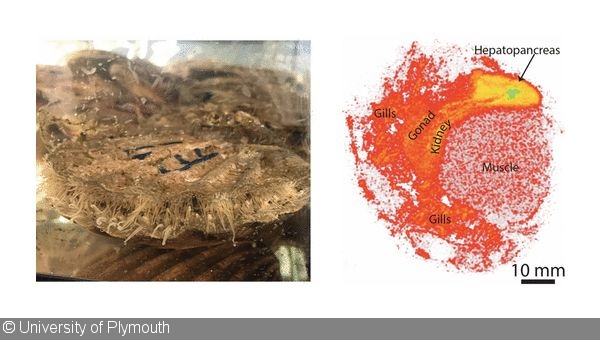 Left: A scallop of the species used in the study. Right: A scan showing particles accumulated within a scallop’s body

Ground-breaking new research has demonstrated that it takes a matter of hours for billions of plastic nanoparticles to spread throughout the major organs of the great scallop (Pecten maximus), a commercially important mollusk. The study showed that after six hours, the intestines of the scallop had accumulated billions of particles measuring 250nm, but even-smaller particles—just 20nm across—had spread throughout the mollusk’s kidney, gill, muscle and other organs.

Accepted for publication in the journal Environmental Science and Technology, the study is significant because the scientists used predicted levels of plastic contamination found in our oceans rather than the very high concentrations that had been used in previous studies.

“For this experiment, we needed to develop an entirely novel scientific approach,” said Dr Maya Al Sid Cheikh, a postdoctoral research fellow at the University of Plymouth who led the study. “We made nanoparticles of plastic in our laboratories and incorporated a label so that we could trace the particles in the body of the scallop at environmentally relevant concentrations.” The researchers manufactured carbon-radiolabeled nanopolystyrene particles, and autoradiography was used to show the number of particles present in the scallops’ tissues and organs.

After the experiment, the contaminated scallops were transferred to clean conditions, but traces were still present several weeks later. Professor Richard Thompson OBE, Head of the University’s International Marine Litter Research Unit, said: “Understanding the dynamics of nanoparticle uptake and release, as well as their distribution in body tissues, is essential if we are to understand any potential effects on organisms. A key next step will be to use this approach to guide research investigating any potential effects of nanoparticles and in particular to consider the consequences of longer term exposures.”