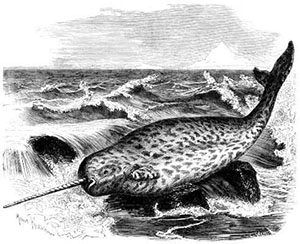 Fleeing from orca whales can be a terrifying experience for a narwhal—but apparently not as terrifying as interacting with humans. The unicorns of the sea are uniquely confused and dazed when facing human-induced stress, according to research from scientists.

The study reveals that the narwhals often get stuck between the flight and freeze response. When narwhals are confronted by humans in the wild their heart rates slow down, which indicates a “freeze” technique. But at the same time, they try to swim away quickly in an escape attempt.

The combination of the two can be dangerous: Diving down deep quickly with a slow heart rate restricts the amount of blood flow to the head.

‘This is an unusual reaction to an unusual kind of threat,” said lead researcher Terry Williams from the University of California, Santa Cruz. “I don’t believe that this is the normal response when the animals are being pursued by a killer whale.”

The scientists hope this insight into the flight or freeze response can help protect narwhals and other marine mammals from human-induced stress. Read more about the study, here.