In a continued effort to bring our readers information on the handful of underwater photographers covering the Bejing Olympics, we found it appropriate to feature another photographer, Wolfgang Rattay.

Our friends at Digifish have posted a handful of Wolfgang's images and a short story about the Reuters photographer. 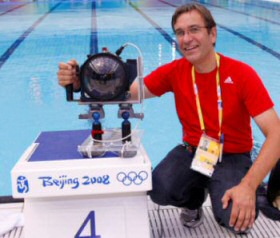 "Every time when Michael Phelps, Stephanie Rice or Britta Steffen go medal hunting in the National Aquatics Center (nicknamed the "Water Cube") at the Beijing 2008 Summer Olympics, Wolfgang Rattay of the Reuters news agency is there with his EOS 1Ds Mark III.

His Canon camera and the Wireless File Transmitter WFTE-2 are safe in a unique UK-GERMANY underwater housing, especially designed for the Olympics.

In cooperation with Subtronic, UK-GERMANY has manufactured the system based on the Wolfgang's requirements and desires. This enabled Reuters to control the camera and also deliver images from the pool in near real time on a laptop computer, giving them an important advantage over the competition."

Wolfgang himself explains a little more on Reuters blog. 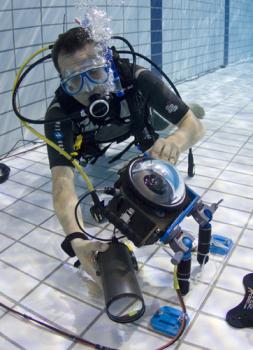 "It is of course not possible for a photographer to be in the pool during a swimming competition, but that doesn’t stop a determined photographer getting the picture!

I have worked on this problem over a number of years, and got it down to a fine art. It is necessary to pre-position an underwater housing containing a regular Canon EOS 1D Mark 2N with (usually) a 15mm fish-eye lens. When the swimmers hit the water or swim over my camera, I release the shutter via a waterproof cable. The data is transferred from the camera to another housing containing a Canon transmitter that transfers the images from the camera to my laptop."

Apparently kudos are in order, as Wolfgang claims he has the leg up on the competition in terms of speed to market - a hot commodity in the on-demand information era.

"I appear to be the only photographer - using a remote controlled underwater camera like this - who has worked out how to achieve consistent results with this notoriously unreliable set-up. Therefore I don’t need to wait for a couple of hours for the competition to end before jumping into the pool to retrieve my CF card, as do the other photographers"