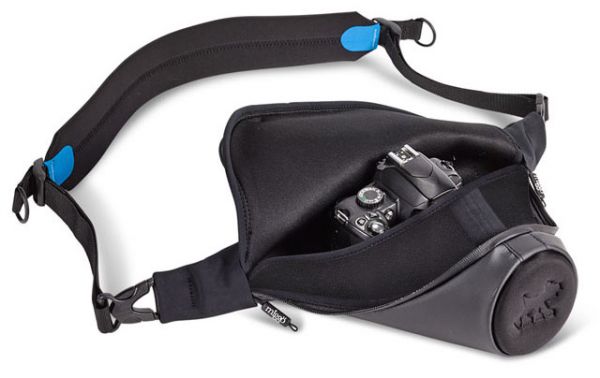 Miggo has revealed that it has a new weather-resistant camera bag in the works called the AGUA, which it is funding via a Kickstarter campaign that has already surpassed the $20,000 goal three times over.

If the pledged amount is anything to go by, it seems there is a healthy demand for this “storm-proof camera-carrier.” Unlike other weather-resistant camera bags, the AGUA is designed to allow photographers to quickly draw the camera—ensuring that you never miss a shot. For shooters who like to capture topside images in wet environments, it could be an ideal carrying case. But Miggo stress that the AGUA is not waterproof, and “you should refrain from dropping it in water or swimming with dolphins.”

A unique feature of the AGUA is that the camera is actually attached to the bag with quick-release buckles, so your precious gear always stays attached—and protected from falling. Thus, because the AGUA’s strap is used to carry your camera, it does away with your original camera strap.

The new bag will be available in three different sizes: the agua 45 for larger DSLRs, the agua 35 for smaller DSLRs, and the agua 25 for mirrorless cameras and compacts. Kickstarter backers will be able to purchase them at $65, $60 and $55, respectively. The bags will eventually be available in stores, but pricing is yet to be confirmed.

Check out Miggo’s video introducing the AGUA below.