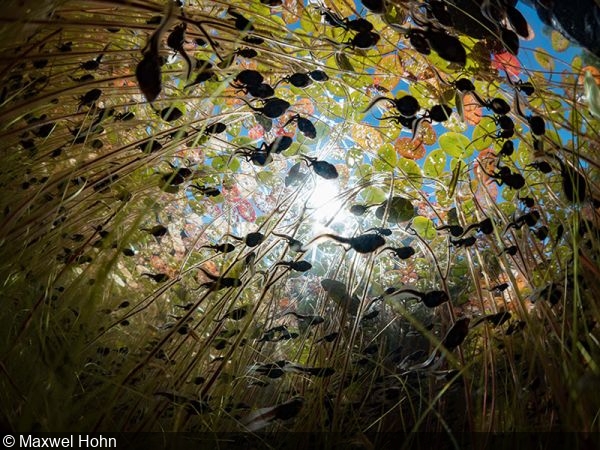 Canadian underwater photographer and filmmaker Maxwel Hohn has released his stunning mini nature documentary Tadpoles: The Big Little Migration, which follows the amazing daily migration of western toad tadpoles across a secluded lake—from the depths to the shallows, and back again—on British Columbia’s Vancouver Island.

Each year for the past four years, Hohn has been coming to the lake to camp, photograph and film the eye-popping tadpole action. Fellow videographer Steve Woods provides additional video, and the documentary is written and edited by filmmaker Russell Clark.

“Documenting almost the entire life cycle of an animal is rare, challenging, and lots of fun,” says Hohn. “Being able to capture something as unique as following the toad’s incredible underwater metamorphosis over the 6–8 weeks has been a passion project from the start. The guessing game of figuring out the daily routine of the tadpoles required patience, observation and a healthy dose of curiosity in order to ‘think’ like a tadpole. For me as a photographer I really wanted to document each of those moments to share everything I’ve learnt from observing these fascinating little creatures.”

Hohn adds: “When they’re in the big thick, carpet-like black mass, it was just mind-blowing. We estimate three million tadpoles in this one location. A friend compares it to the migration of wildebeest moving across the Serengeti, but on a tiny scale! It was humbling and heartwarming. To see these aquatic tadpoles evolve into terrestrial animals before my own eyes left me feeling like a proud parent, and is proof that even the smallest of animals can have the biggest of impacts.”

Check out the mesmerizing film from Maxwel’s Vimeo channel below.