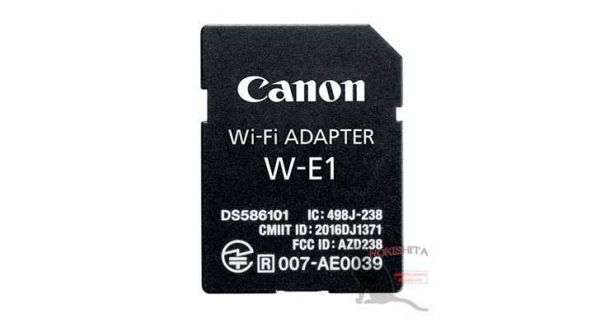 A couple weeks ago, we shared a rumor that was rather unique: Canon’s in-progress WiFi adapter shaped like a standard SD card.

Certainly different than the typical rumor, we thought this technology wouldn’t be formally announced for a few months at the earliest. But with the release of a leaked image and set of specifications, it appears we may see this adapter announced at Photokina.

Officially named the “W-E1,” this WiFi adapter is designed to fit into the Canon SD slot. As we guessed from the rumors, you will need to use a CF card when using the WiFi function. This means that the CF card will be the medium for recording images, while the SD WiFi adapter allows control from a smartphone—and possibly the ability to transmit images up to 30 feet away.

According to the leaked specs, the W-E1 will only be capable with the following Canon cameras: 7D Mark II, 5DS R, 5DS. Stay tuned for more on this nifty little adapter.