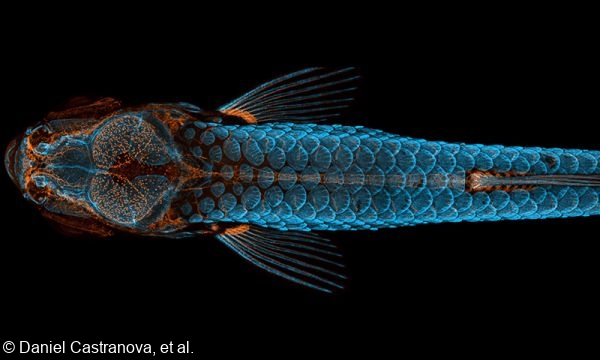 There are macro photographers and then there are photomicrographers. You couldn’t capture this exquisite specimen on a blackwater dive: The winning image in the 46th annual Nikon Small World Photomicrography Competition is taken using confocal microscopy and image-stacking—by stitching together 350 individual images, in fact.

Photomicrographer Daniel Castranova, who works in Dr. Brant Weinstein’s lab at the Eunice Kennedy Shriver National Institute of Child Health and Human Development (part of the National Institutes of Health), acquired the image as part of an effort that resulted in a groundbreaking discovery—that zebrafish have lymphatic vessels inside their skull, which were previously thought to occur only in mammals. The work could revolutionize research related to treatments for diseases that occur in the human brain, including cancer and Alzheimer’s.

The first runner-up was Daniel Knop for his beautiful image of the embryonic development of a clownfish, while third place went to Igor Siwanowicz for his mind-blowing capture of the tongue of a freshwater snail.

Check out the press release below and marvel at the full set of winning images here.

Nikon Instruments Inc. today announced the winners of the forty-sixth annual Nikon Small World Photomicrography Competition. Daniel Castranova, assisted by Bakary Samasa while working in the lab of Dr. Brant Weinstein at the National Institutes of Health, took the top prize for his artfully rendered and technically immaculate photo of a juvenile zebrafish. The image is a dorsal view of the head of a fish with fluorescently “tagged” skeleton, scales (blue) and lymphatic system (orange), taken using confocal microscopy and image-stacking.

This image is particularly significant because it was taken as part of an imaging effort that helped Castranova’s team make a groundbreaking discovery – zebrafish have lymphatic vessels inside their skull that were previously thought to occur only in mammals. Their occurrence in fish, a much easier subject to raise, experiment with, and photograph, could expedite and revolutionize research related to treatments for diseases that occur in the human brain, including cancer and Alzheimer’s.

“The image is beautiful, but also shows how powerful the zebrafish can be as a model for the development of lymphatic vessels,” Castranova said, “Until now, we thought this type of lymphatic system only occurred in mammals. By studying them now, the scientific community can expedite a range of research and clinical innovations – everything from drug trials to cancer treatments. This is because fish are so much easier to raise and image than mammals.”

“For 46 years, the goal of the Nikon Small World competition has been to share microscopic imagery that visually blends art and science for the general public,” said Eric Flem, Communications Manager, Nikon Instruments, “As imaging techniques and technologies become more advanced, we are proud to showcase imagery that this blend of research, creativity, imaging technology and expertise can bring to scientific discovery. This year’s first place winner is a stunning example.”

Second place was awarded to Daniel Knop for his image of the embryonic development of a clownfish (Amphiprion percula) on days 1, 3 (morning and evening), 5, and 9, created using image-stacking. It shows the development, from hours after fertilization (even with a pack of sperm cells being visible on top of the egg), until hours before hatching. The primary challenge was to create sharp focus stacking pictures while the embryo was alive and moving.

Third place was captured by Small World veteran Dr. Igor Siwanowicz for this picture of the tongue (radula) of a freshwater snail, using confocal microscopy.

In addition to the top three winners, Nikon Small World recognized 85 photos out of thousands of entries from scientists and artists across the globe. 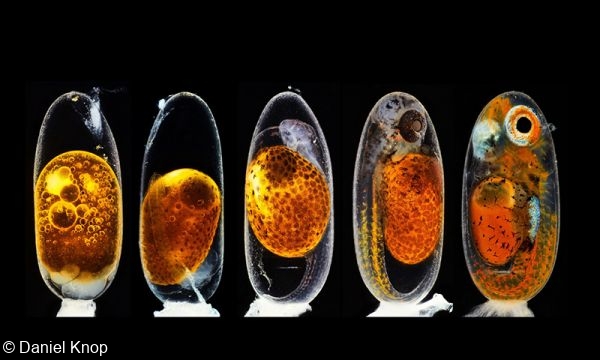 2nd place: Embryonic development of a clownfish (Amphiprion percula) on days 1, 3 (morning and evening), 5, and 9 by Daniel Knop 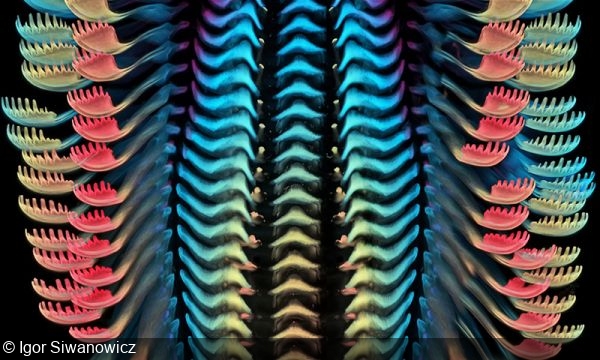