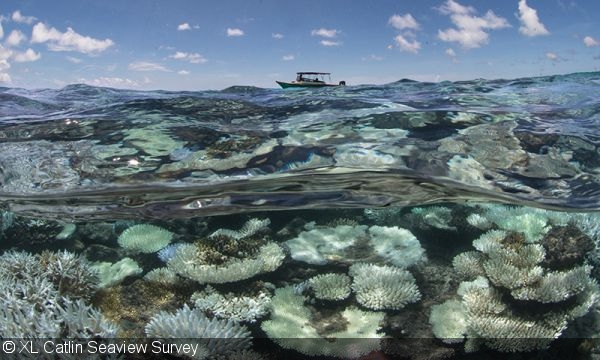 Coral bleaching in the Maldives

A new report by the UN Intergovernmental Panel on Climate Change (IPCC) has issued a dire warning: The crucial threshold temperature increase of 1.5 degrees Celsius (2.7 degrees Fahrenheit) above pre-industrial levels may be reached as early as 2030. The report says “rapid, far-reaching and unprecedented changes in all aspects of society” are needed to stem catastrophic climate change, bringing risks of drought, wildfires, flooding, and food shortages. One of the biggest losers if we reach 1.5°C? Between 70 and 90% of coral reefs are expected to die off.

“The window on keeping global warming below 1.5°C is closing rapidly,” Andrew King, a lecturer in climate science at the University of Melbourne, said in a statement, adding that “current emissions pledges made by signatories to the Paris Agreement do not add up to us achieving that goal.” The planet has already warmed approximately 1°C. According to the report, in order to keep warming to around 1.5°C, global carbon dioxide emissions would need to drop by 45% from 2010 levels, by 2030, reaching net zero by around 2050. The inevitability of a rise of 1.5°C is obvious from the report’s comparison of a 1.5°C increase with a 2°C increase: Shockingly, in the latter scenario, coral reefs would be almost completely wiped out.

In the 2015 Paris Climate Agreement, almost 200 countries agreed to pursue efforts to limit the increase in global temperatures to 1.5°C—and maintain them “well below” 2°C. U.S. President Donald Trump announced in June 2017 that the country would pull out of the agreement, drawing international condemnation. However, the earliest withdrawal date is November 4, 2020, one day after the 2020 U.S. presidential election.