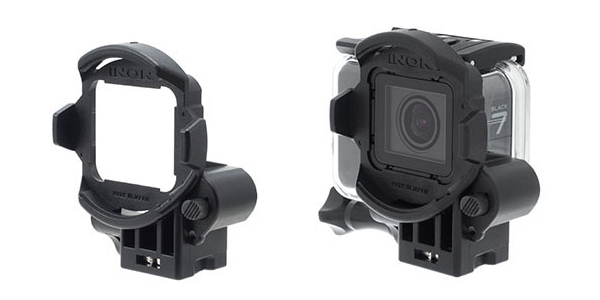 Inon has announced that its existing lens mount for GoPro HERO5 and HERO 6 is compatible with the new HERO7 Black in GoPro’s Super Suit dive/extreme sport housing—though not with other new models in the series, e.g., HERO7 Silver, which don’t work with the housing.

The SD Front Mask makes it possible to mount Inon attachment lenses such as the UFL-G140 SD semi-fisheye conversion lens and the UCL-G165 SD wide close-up lens, as well as build full rigs by attaching various adapters and arms.

For more details, see the press release below. Contact your local dealer for pricing.

INON INC. is pleased to announce that existing SD Front Mask for HERO5/6 is confirmed compatible with HERO7 BLACK in combination with its genuine housing Super Suit as well to attach quality INON attachment lenses designed for action cameras and add arm system.

As the camera lens is identical with previous GoPro® cameras, performance (angle of view and depth of field) through INON attachment lenses below remains same as the performance of using those lenses attached on HERO6 BLACK/HERO5 BLACK. (*2)

As compatibility with the new HERO7 BLACK has been confirmed, product name of existing SD Front Mask has been changed as below.

(*1) The HERO7 SILVER/HERO7 WHITE is not compatible with the GoPro® genuine dive housing Super Suits.

*Press release information is as of October 19, 2018 and subject to change without prior notice.