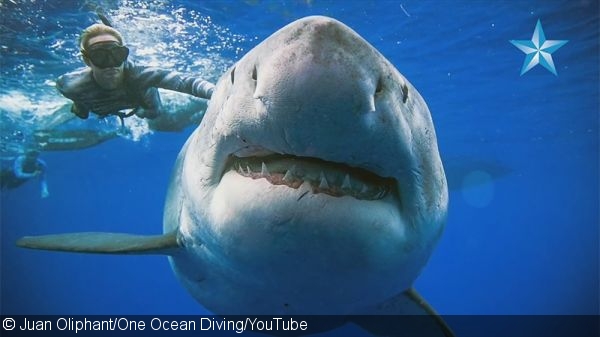 Award-winning underwater photographer and conservationist Juan Oliphant would think nothing of encountering any number of pelagic shark species on any given day researching sharks off the coast of Oahu, Hawaii. But nothing could have prepared him for what showed up a few days ago.

Oliphant and One Ocean Diving co-founder Ocean Ramsey were monitoring tiger sharks feeding off a sperm whale carcass towed 15 miles offshore by NOAA when a huge female great white appeared out of nowhere. “I’m speechless!!!” wrote Oliphant in a post on his Instagram page. “A BIG beautiful GREAT WHITE SHARK & rough-toothed dolphins right offshore my home #Oahu. I’ve been lucky enough to dive with white sharks here 4 times over the years and every year in isla Guadalupe Mexico and Australia and Africa but here, TODAY!!!!! With this big beautiful Great White has probably been my most favorite White Shark to interact with. I gently pushed her off the engines and gave her a pet as she came under my @oneoceandiving boat for a scratch.”

Ramsey, a marine biologist and shark advocate who is known for freediving with the apex predators, estimated the individual was more than 20 feet long and eight feet high—and speculated that she may be pregnant. “She’s shockingly wide,” Ramsey told the Honolulu Star-Advertiser.

Amazingly, Ramsey may even have dived with this great white before. If she’s right about the animal’s size and markings, she may be the shark nicknamed Deep Blue, who she has swum with on research expeditions off Mexico’s Guadalupe Island, thousands of miles away. There were sightings of a great white at the whale carcass a few days before the One Ocean Diving team’s encounter, and that individual has indeed been identified as Deep Blue. However, it appears that the shark that Ramsey and Oliphant interacted with was not Deep Blue but a second similarly sized great white. Either way, the species is rare in Hawaii’s waters, where it’s a little too warm: Great whites generally prefer colder water where they can find prey like sea lions and elephant seals.

Commenting on the experience on her Instagram page, Ramsey, who is a prominent figure in the effort to save sharks, wrote: “I’ve been trying to get the bill re-introduced in Hawaii to ban the purposeful killing of sharks and rays and this just feels like the biggest sign to keep pushing forward for more protection for them.” 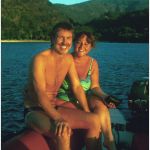