Earlier this month, news surfaced about a bill in Palau's congress  that would eliminate the protection of sharks in Palau's waters - protection which was only just instated in 2004. The new bill even motivates fishermen to land sharks. Senate bill No. 8-44 seeks "to amend Title 27 of Palau's National Code to allow for the commercial fishing of sharks within Palau's Exclusive Economic Zone, to impose a tax on the export of sharks and tuna-like species, and for other related purposes."

"I fear Palau is going to commit a nightmare for itself if it goes through with this legislation.

I've dived Palau's waters twice, in 2004 and then again in 2007, and I'd already noticed a definite fall-off in shark populations (same time of year, same conditions). This seemed the result of illegal poaching with current protections not being strictly enforced.

Why on earth is Palau being so short-sighted? The bill is an unbelievably disastrous proposal in terms of Palau's economy as well as damage to the conservationist image it has achieved up to now (pro-whaling vote aside). This bill would surely destroy what remains of Palau's "natural wonder of the world" tourist lure. It's a tragedy in the making for the sharks, the ecosystem, and for Palau's dive industry."

Our friends at Sam's Tours in Palau posted the following earlier this month, and urge all of us to contact the tourism board, the chamber of commerce and the visitorsauthority to voice our support against this move of passing Senate bill 8-44. 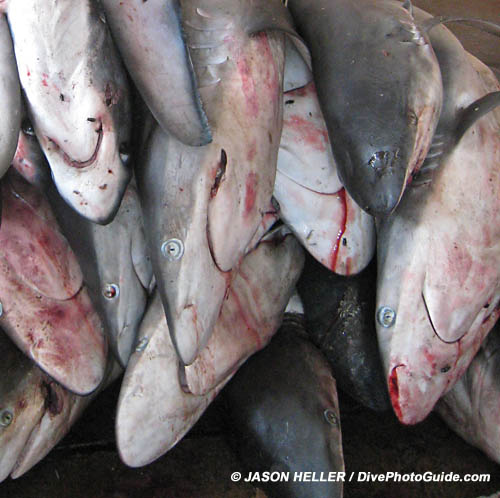 A Bill is now before Palau's OEK (Congress) that if passed would eliminate Palau's strong shark protection laws and actively encourage fishing for sharks and the taking of shark fins.

Senate Bill No. 8-44 seeks "to amend Title 27 of Palau's National Code to allow for the commercial fishing of sharks within Palau's Exclusive Economic Zone, to impose a tax on the export of sharks and tuna-like species, and for other related purposes."

The proposed law is a potentially severe blow to Palau's tourism industry of which scuba diving is the mainstay. Palau gained international recognition in 2004 for passage of landmark legislation that protected sharks, turtles and rays and outlawed the practice of shark-finning. Under Senate Bill 8-44 it is unclear whether shark fishing and or shark-finning is or is not permitted and the ambiguity will make it virtually impossible for law enforcement to successfully prosecute potential violators. Sections of the bill read as follows:

"It is unlawful for any person: to remove the fins of or otherwise intentionally mutilate or injure any such shark"

"It shall be unlawful for any person to have on board a fishing vessel shark fins that total more than five percent of the weight of sharks on board."

Other provisions of the proposed Act call for:

"An appropriate export tax for shark and fish caught pursuant to this Act."

"A minimum monetary or in-kind fish donation that commercial fishing companies shall make to the Belau National Hospital, the Aging Program within the Ministry of Community and Cultural Affairs, or similar governmental agency or private, non-profit organization. These donations shall come from fish or shark caught pursuant to this Act, or revenues generated from those fish or shark."

Members of the Belau Tourism Association, Palau Chamber of Commerce and the Palau Visitors Authority are strongly opposed to passage of this legislation.

Fishing company consortiums from the city of General Santos, Philippines, are pressing hard for rights to fish in Palau's Exclusive Economic Zone and it is widely believed that introduction of this bill is no mere coincidence. Foreign fishing fleets have a well documented track record of violating Palau's environmental laws, poaching Palau's marine resources and violating fishing agreements. This proposed Bill puts the Palau's tourism industry directly at odds with commercial fishing in Palau's waters as the two are simply incompatible.

In 2004 Palau was recognized by shark conservation agency Sharkproject as their Shark Guardian of The Year. Passage of Senate Bill 8-44 will be a sudden and potentially costly about face for Palau that will yield no gain. Palau only stands to lose...lose its fisheries and its dive industry.

I urge you to speak out against this proposed Bill by sending your comments to all of the following organizations who are fighting against Senate Bill 8-44.