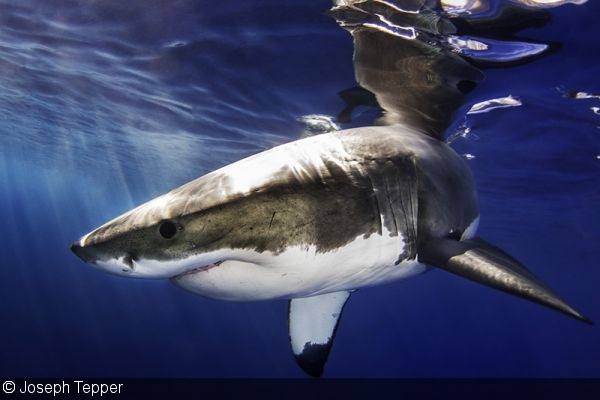 A galeophobiac’s worst nightmare. Or an underwater photographer’s best dream. That’s probably how best to describe the so-called great white shark “lair” that has been discovered in the Pacific.

Researchers hoping to learn more about where Pacific great whites spend their winters and spring have documented a unique environment that provides nourishment after long travels. Dubbed the White Shark Café, this 160-mile-radius region to the east of Hawaii was previously known but not understood to scientists.

As it turns out, it’s the abundance of light-sensitive animals in the midwater column that tantalizes the sharks to travel hundreds (and thousands) of miles to the middle of nowhere. The midwater is the depth just above complete darkness in the ocean—and this particular swath of ocean is packed with prey such as squid and small fish.

“The story of the white shark tells you that this area is vitally important in ways we never knew about,” expedition leader Salvador Jorgensen told the San Francisco Chronicle. “They are telling us this incredible story about the midwater, and there is this whole secret life that we need to know about.”