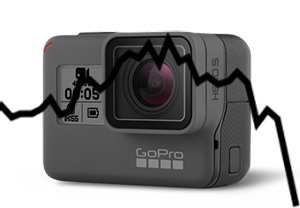 Want to buy the latest GoPro HERO5? Where do you go? Not Amazon.

GoPro has pulled sales of their HERO5 and HERO5 Session off of the megasite, Amazon. The reason seems to be a dispute over pricing that cost GoPro upwards of $10 million dollars in sales.

Amazon decided to lower the price of the action cameras below the negotiated minimum price, according to Fortune. This is no small matter: Amazon accounts for 14 percent of all GoPro sales. What’s more, when Amazon lowers the price, other retailers like Best Buy are coerced into doing the same. Don’t worry, you can still find the latest GoPro cameras and accessories over at Backscatter.

So $10 million in lost sales is bad. But what is worse is a 20 percent decline in GoPro’s stock price in the last week—largely due to the Amazon squabble. This would account for a loss in excess of $350 million in value for shareholders. Yikes.

The halt in Amazon sales is temporary, however. A GoPro spokesperson confirmed the cameras would be back in stock on Amazon’s shelves by early November. Let’s just hope they make it in time for the holiday season, or we could see an even bigger impact on GoPro’s valuation.