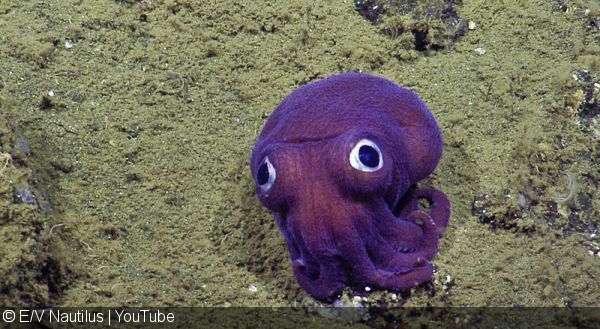 No, this isn’t the latest character to appear on Sesame Street. At least, not unless they’ve started filming episodes on the seabed at a depth of nearly 3,000 feet—because that’s exactly where researchers found this adorable little guy.

In a now-viral YouTube video, the team controlling a remotely operated research vehicle from the E/V Nautilus erupts in hysterics as the vehicle’s camera zeroes in on a purple creature sitting contentedly in the middle of a featureless sea floor. “It’s like some little kid dropped their toy,” says one. “Maybe it’s a cuddlefish!” says another. “They look like googly eyes,” says a third. “It looks so fake!” Apparently, serious scientists aren’t above having a good laugh.

The animal turns out to be a stubby squid (Rossia pacifica), which looks like a cross between an octopus and squid, but is more closely related to cuttlefish. Inhabiting the Northern Pacific, the species lives on the seabed and uses its large eyes to spot prey such as shrimp and small fish. They’re typically found at depths of up to 1,000 feet, but have been sighted at almost 4,300 feet.

You can see more of the curious finds of the E/V Nautilus at www.nautiluslive.org.