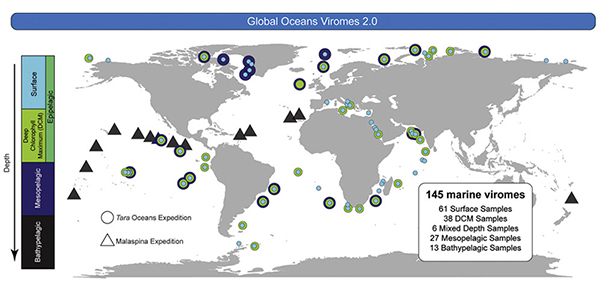 An international team has conducted the first pole-to-pole survey of the ecological diversity of viruses in the oceans and have identified just under 200,000 marine viral species. This figure is many times more than the 15,000 marine viruses known from previous surveys and cultured viruses of microbes. The findings appeared in the journal Cell on April 25th.

“Viruses are these tiny things that you can’t even see, but because they’re present in such huge numbers, they really matter,” says Ohio State University microbiologist and senior author Matthew Sullivan. “We’ve developed a distribution map that is foundational for anyone who wants to study how viruses manipulate the ecosystem. There were many things that surprised us about our findings.”

One of the surprises was that analysis showed that the viruses were organized into five distinct ecological zones throughout the ocean—unexpected given the complexity of ocean currents and the diversity of marine regions. The researchers also discovered a surprising biodiversity hotspot in the Arctic Ocean, which runs counter to the general paradigm that species diversity is lowest near the poles and highest near the equator.

The samples were collected between 2009 and 2013 during expeditions as part of the Tara Oceans endeavor, which aims to predict and anticipate the impacts of climate change. Scientists collected ocean water samples from different depths across various geographical regions and these samples were subsequently analyzed in a dozen different laboratories. The researchers say that the work has important implications for understanding how ocean microorganisms affect the atmosphere. “Previous ocean ecosystem models have commonly ignored microbes, and rarely included viruses,” says Sullivan, “but we now know they are a vital component to include.”

nice joy wrote:
nice <a href="https://awesomewebsiteblogger.blogspot.com/2019/05/technology-development.html" target="_blank">Technology Development</a>
You must be logged in to comment.
Support Our Sponsors
Advertise With Us
Newsletter
Travel with us