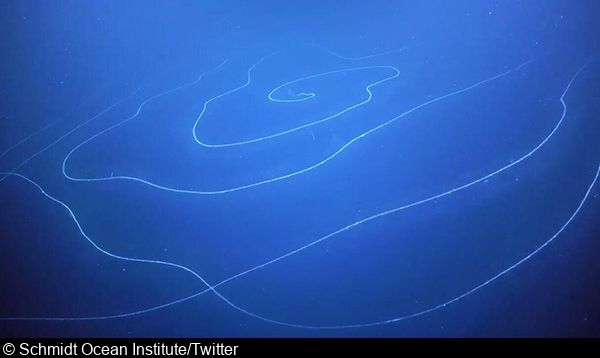 The scientists aboard the Schmidt Ocean Institute’s research vessel Falkor are already lucky: They get to continue exploring the deep without worrying about catching a deadly virus. But recently the team of researchers from institutes including Western Australia Museum, Schmidt Ocean Institute and Scripps Institution of Oceanography had even greater cause for celebration after stumbling across a huge string-like creature called a siphonophore.

“Everyone was blown away when it came into view,” biologists Nerida Wilson and Lisa Kirkendale from the Western Australian Museum told ScienceAlert. “There was a lot of excitement. People came pouring into the control room from all over the ship. Siphonophores are commonly seen but this one was both large and unusual-looking.” While the siphonophore hasn’t been formally measured, the outer ring was estimated to be about 47 metres long (154 feet), which would make it longer that any other animal on the planet.

Technically, though, it isn’t a single animal but rather a colony of millions of cloned individuals called zooids, each acting like an organ inside the larger siphonophore body. Sifting the pelagic depths for food, they pass nutrients along a stem to which they’re all connected.

Dr Wilson and her team are on expedition studying the Ningaloo Canyons via the ROV SuBastian, whose video surveys are complemented by environmental genetics (eDNA), which refers to the genetic material that can be recovered from an environmental sample.