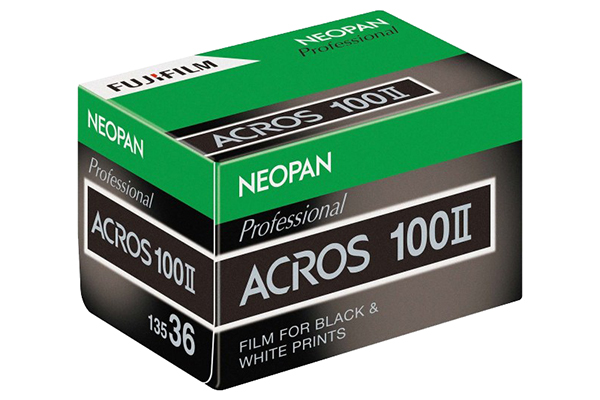 Did you hang onto that old 35mm film SLR and housing? Well, if you did, it might soon be time to start channeling your inner Ernie Brooks! Yes, Fujifilm is resurrecting its famed Neopan 100 Acros black-and-white film this fall—about a year after they discontinued it.

However, the forthcoming film is, according to Fujifilm, new and improved: Neopan 100 Acros II is “an ultra-high-quality black-and-white film with the world’s highest level of graininess, three-dimensional tone reproduction, and excellent sharpness,” says Fujifilm in a release on its Japanese site, adding that the Acros II has sharper highlight gradations and overall very high levels of sharpness.

Fujifilm halted sales of black-and-white films last fall because of the drop in demand and increasing difficulty obtaining the raw materials required for production. Now, the company says it has found substitutes for those hard-to-source materials and “radically reexamined” its manufacturing process.

The film will be introduced in Japan in 35mm and 120 formats film in the fall, but it’s not clear when it will be rolled out in the U.S.—or what it will cost.

TOKYO, June 10, 2019 – FUJIFILM Corporation (President: Kenji Sukeno) announced a new generation of NEOPAN 100 ACROS II, black-and-white film. This 100 ISO film will deliver unsurpassed resolution, fine grain and sharpness, with exceptional detail satisfying a broad range of shooting scenarios and exposures. The 35mm and 120 format film will be introduced in Japan this fall, with other markets to follow, based upon demand.

As the demand for film rapidly decreased over the past decade and raw materials became difficult to obtain, it caused the company to discontinue marketing black and white film. Thanks to consumer feedback, particularly from millennials and GenZs, who have become the new film enthusiasts, the market is changing once again. To meet the needs of this new market, Fujifilm is reviving “ACROS II”.

As a leading company in the imaging field, Fujifilm will never stop meeting the challenges of the diverse needs of customers in a wide range of fields, from analog to digital, and continue to provide improved products and services.