Explorers Club 104th Annual Dinner
By Jason Heller, March 17, 2008 @ 02:00 AM (EST)
We had the honor and privilege of being invited by David Doubilet and Jennifer Hayes to attend the 104th Explorers Club Annual Dinner. The prestigious event is held each year at the Waldorf Astoria in New York, and it is a very unique event indeed! This year was even more special for us because the theme was "Exploring Planet Ocean". 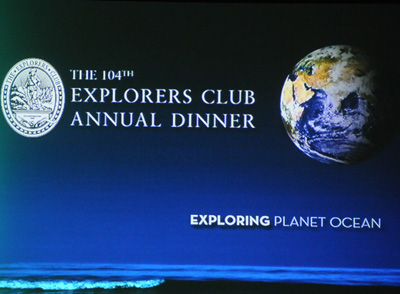 The Explorers Club, founded in 1904, is "dedicated to the advancement of field research, scientific exploration, and the ideal that it is vital to preserve the instinct to explore." Membership is open to qualified individuals and corporations that undertake significant roles in the field of science and exploration. Members range from astronauts like Buzz Aldrin (who we got to hang out with afterwards at a private after party hosted by none other than Sylvia Earle!), to underwater pioneers like Sylvia, Bob Ballard, to mountaineers like Sir Edmund Hillary (first man to climb to the peak of Everest, and honored this year as he past away in 2007). Besides Doubilet, Some of the underwater photographers, cinematographers and artists in attendance included Wyland, Stan Waterman, Douglas Seifert, Phillippe Cousteau, Howard & Michele Hall and Wolcott Henry.
This was one of the most inspirational groups to share an evening with, and we will be joining the club and bringing more stories on the amazing projects and accomplishments of some of the diverse members from around the globe! 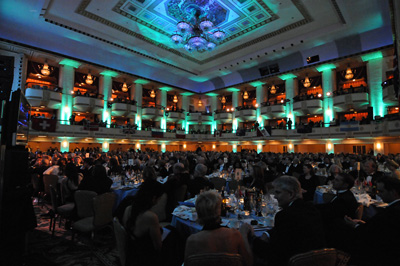 The grand ballroom at the Waldorf is an impressive venue, and has hosted many prestigious events over the years. However, the Explorers Club is the longest running annual event held here. 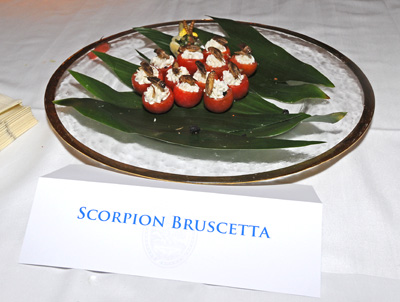 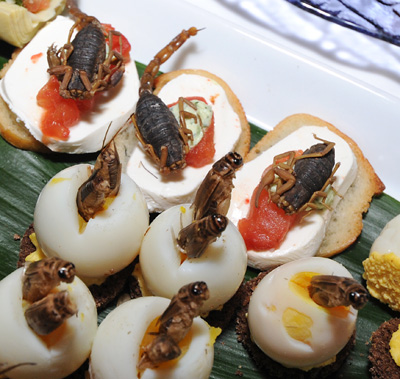 A close-up of the Scorpion Bruscetta and some Crickets in some type of eggs (We decided that we'll let others figure that one out!) 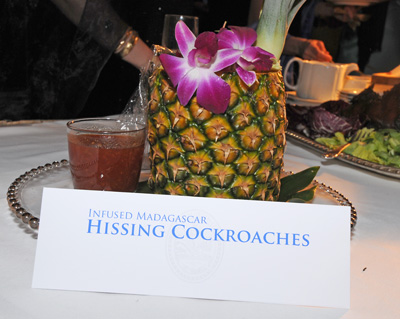 We tried, we really tried...
Do you think Wendy actually ate that big cockroach? 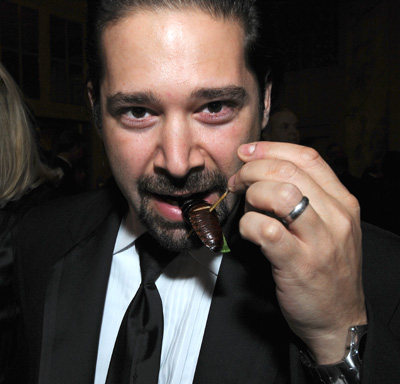 I had to try one of the cockroaches - you only live once, right? Mmm crunchy! (Yuck!) 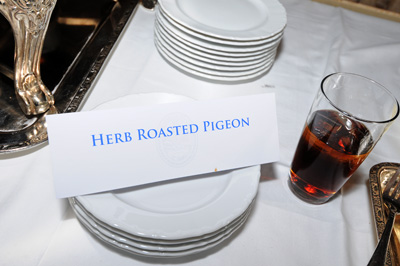 How much more appropriate can you get than infused Cockroaches and herb roasted Pigeon being served in New York City. Now we knew the roaches were from Madagascar, but we just couldn't help but wonder if there were a handful less Pigeons flying around Manhattan after this dinner. We actually thought that the Pigeon was quite tasty ...tasted like chicken - really. 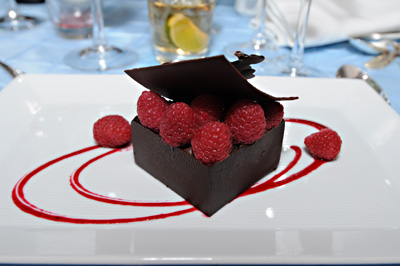 The main course was less exotic and topped off with this really nicely presented chocolate rasberry dessert. Nice touch after the shocking appetizers! We came prepared to leave hungry, but ended up pretty satisfied with "regular" food that saved the day. 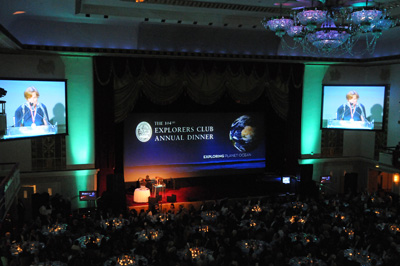 Sylvia Earle was the Dinner Chair of the evening and gave a powerful opening speech about the state of our world's oceans. Sylvia is a living legend in her own right, is an Explorer in Residence for National Geographic and has spent more time in the deepest oceans (over 6,000 hours!) than most of us will spend in shallow coral reefs in our lifetimes. She's an important force in ocean exploration and has a passion for the seas that is ad deep as the ocean itself. 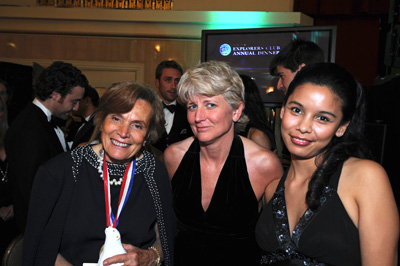 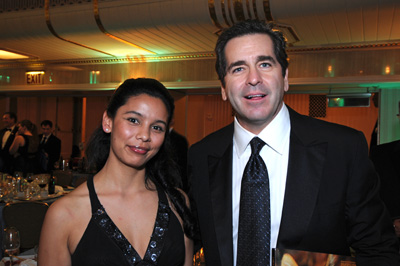 Wendy and CNN's Miles O'Brien, the host of the evening 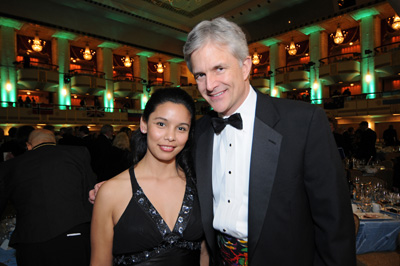 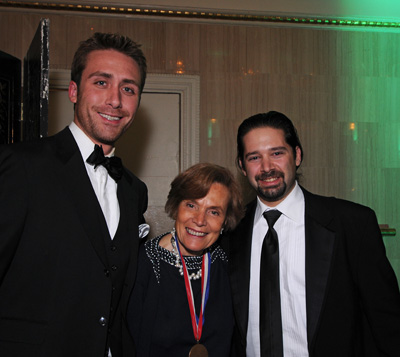 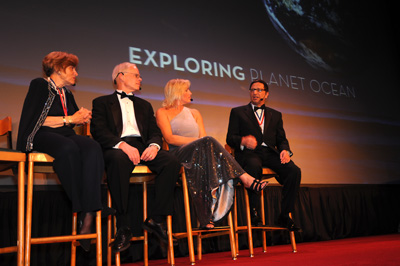 Miles moderated an esteemed panel of underwater legends who discussed the plight of our oceans. The panel consisted of Sylvia Earle, director of research at Woods Hole, Laurence Maden, marine scientist, author and director of Aquarius Reef Base in Key Largo, Ellen Prager, and of course the legendary underwater photographer, David Doubilet. They discussed man's unintended quest to destroy our oceans, our new found knowledge of what's actually happening, and the dire need for humanity to do something about it. David compared man's relationship with the ocean as "Conquistadores", who both pushed the boundaries of exploration, but destroyed at the same time. He joked the only difference is that we haven't attempted to convert the fish to Catholism yet. If only the rest of the world could understand what these luminaries and explorers and all of us divers have seen firsthand. I noted to Miles O'Brien at the end of the evening that I hope he learned a lot and can get CNN to cover the urgent need for us to save our oceans. 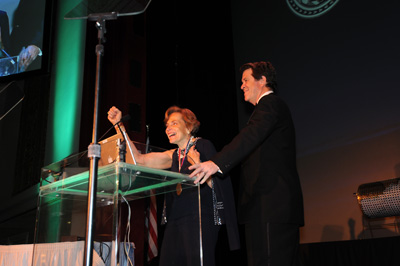 Sylvia and Exploers Club president Dan Bennett give the audience the charge to save the oceans and never stop exploring. 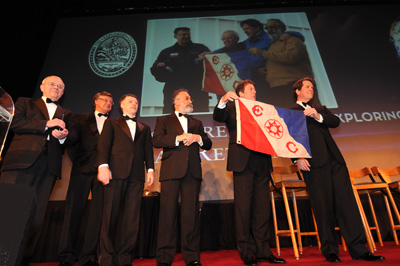 The crew of the Russian submersible MIR-2, who recently returned from the first ever manned descent to the seabed of the Amundsen Plain under the Geographic North Pole. The crew included pilot Yevgeny Chernyaev, Mike McDowell and Frederick Paulsen. It took nearly three hours to reach the seabed 4,261 meters (13,980 feet). Data from the expedition will contribute to the first systematic baseline survey of the North Pole deep sea ecosystem. 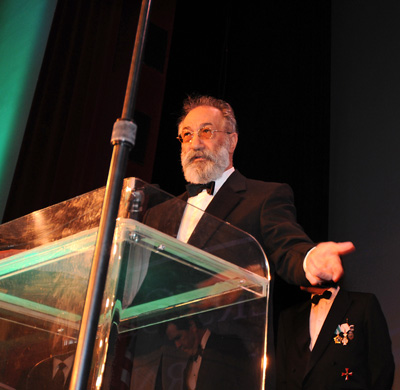 Captain Yevgeny Chernyaev addresses the audience with a passionate speech. The speech itself was in Russian, but a translator translated it to English for the eager crowd. 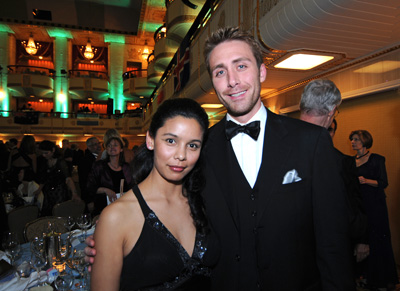 Wendy & Phillippe Cousteau at the end of a fruitful and interesting evening. 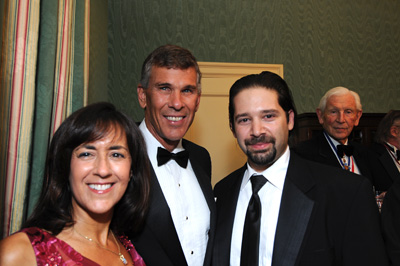 Michelle Hall, Howard Hall & yours truly hanging out at the private after party soiree hosted by Sylvia Earle. Apparently this is an annual tradition for the underwater folks - a tradition we were honored to be invited to and hopefully will be part of for many years to come. The group of people we rubbed elbows with were the upper echelon of explorers and scientists. Howard & Michelle just returned from shooting their latest IMAX film in Papua New Guinea. 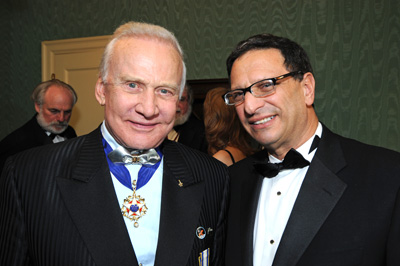 A pair of legends from outer space and inner space. Buzz Aldrin and David Doubilet. Reminiscing about Buzz Aldrin's contribution to NASA (and the world's) space programs in school, I just had to meet him. Thanks to David for introducing us! The experiences and discoveries that the two of these guys eyes have witnessed are collectively more than all of us mere mortals of the world combined! 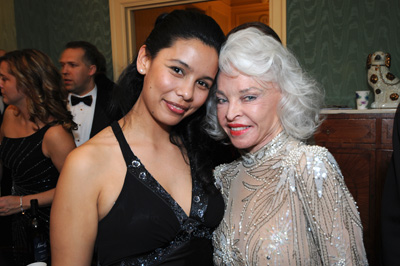 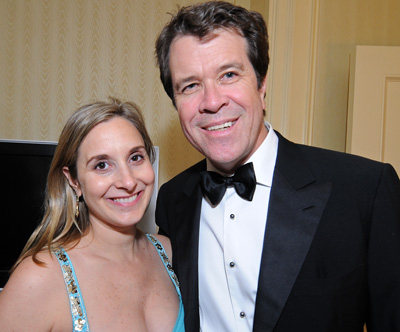 Collette Bennett & Explorers Club President Dan Bennett. Apparently the addage 'behind every strong man stands an even stronger woman' holds true for this dynamic couple. Collette is a big wig at Rolex and also a driving force in the logistics of a well put together evening. She's also very pregnant and is about to blow any moment! Congratulations Dan & Collette! 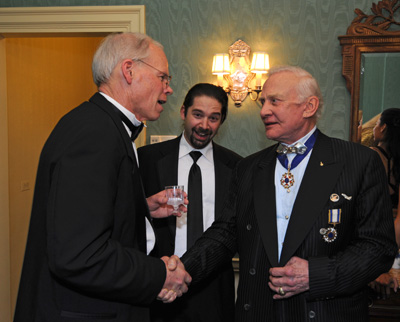 Laurence Madin (Woods Hole director of research) meets Buzz Aldrin. Check out the silly idiot in back of them! (Photo by Davd Doubilet) 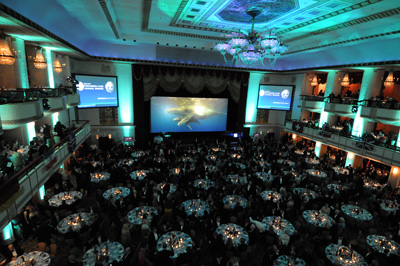 As our coverage of this year's Explorers club Dinner comes to a close, we reflect on the many contributions made by all underwater explorers...and that means each and every one of us. Every diver becomes an advocate to the ocean. Every underwater photographer and videographer becomes a window to the health and sustainability of the world's marine ecosystems. Biodiversity in the oceans is declining, species are disappearing, and many of them will have never been discovered at all. We must act to help save our oceans. Jaques Cousteau once said "When one man, for whatever reason, has the opportunity to lead an extraordinary life, he has no right to keep it to himself." We each have the ability to be extraordinary in our own way. The ocean has done so much us. It has given and sustained life since the beginning of time., and it is now our turn to give back, for the oceans, and for our own sustainability. Another great line from Jaques Cousteau "If we go on the way we have, the fault is our greed and if we are not willing to change, we will disappear from the face of the globe, to be replaced by the insect."
Please ask yourself regularly "what have I done for the ocean lately?"
- From the entire DPG team