Eilat Epson Red Sea Competition 2009: Day 6
By Matt J. Weiss, November 18, 2009 @ 02:08 AM (EST)
By Keri Wilk
Day 6 (November 14th)
Unfortunately, I was forced to leave only minutes before the award ceremony began, in order to catch a flight back to Toronto, but the results were passed on to me via text message and email as soon as they were announced. In my absence, I also recruited a few friends to relay the vibe of the ceremony to me, so I will in turn pass the excitement on to you. We’ve waited until now to post the results, since the winning images have just been released, so here is what many of you have been waiting for!

The Manta dive center was abuzz with activity once again… although now significantly fewer cameras could be seen being prepped for immersion. Divers doing open water training courses, couples doing resort courses, and families escaping Tel Aviv for the weekend filled the center instead.  However, at 11:00, the traditional group “Satil” wreck photo was taken of all who were willing to participate. Many of the competitors took advantage of this last day to set the gear aside, and relax with whom they came, to absorb some of the more “dry” sites that Eilat has to offer. Did I mention that Egypt and Jordan are only a stone’s throw away from Eilat? Well, they are. And if I had more time, I would’ve loved to have put my feet across their borders, to tick off another two countries on my checklist. 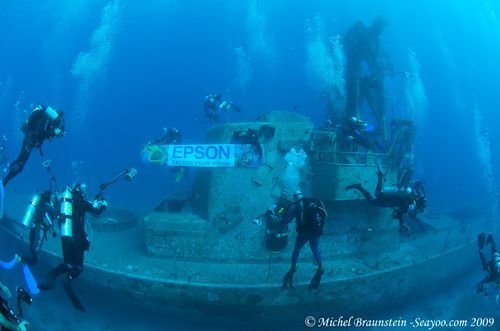 Before the ceremony began, I had lunch at an adjacent diner (“Aroma”), giving me a front row seat for the preparation that was going into this year’s award night. Rather than last year’s more calm, soothing, almost ‘elevator music’ motif, an eardrum rattling rock band was doing sound checks, getting ready for a big, loud night. Darkness falling was my cue to leave, so I off I went to the airport, just when the fun was about to start. 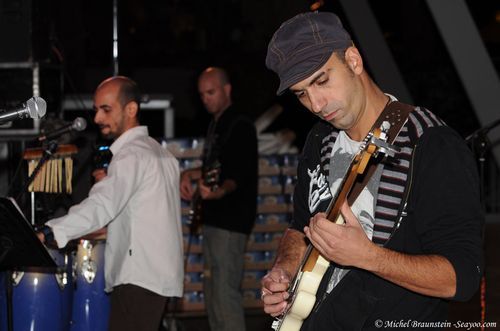 Sure enough, the band welcomed everyone with a series of rock songs that were surely recognizable by the majority off the crowd, and the speeches/awards began. 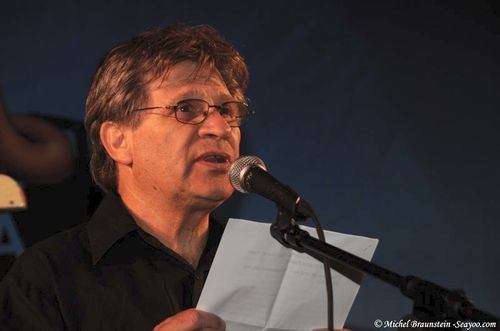 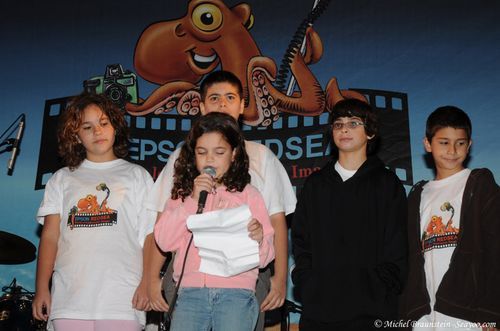 First on the chopping block was the “Children of Epson Red Sea” category, which, as I explained earlier was open only to youngsters 7-14 years old. What I didn’t mention was that the judging of this category would also be done by children in the same age bracket! With the assistance of Razi Livnat and Boaz Samorai, 1st, 2nd and 3rd place images were chosen, with the winner receiving almost $1000 worth of prizes! Taking the top prize was 9 year old Ido Farkel… congratulations! His winning image of a lionfish stalking a group of glassfish at the surface, could very well have been shot by any of the “professionals” in this competition, and no one would have known any better. 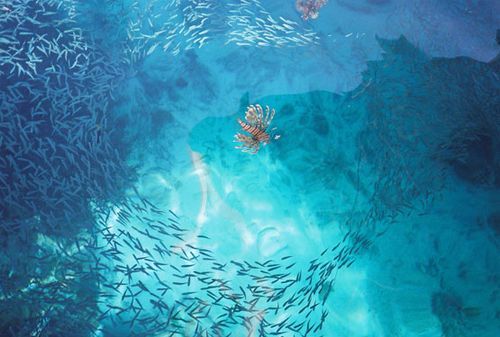 1st place winner of the  “Children of Epson Red Sea” category by 9-year old Ido Farkel
Next, Roni Soffer took the stage to present a series of images entered in the amateur category, explaining that the submissions were anything BUT amateur. He went to great lengths to emphasize the how much entries in this category have improved since being introduced only a few years earlier. The winning images further exemplify the quality level that he was talking about. Taking the top prize in this category was Ilan Ben-Tov, with a stunning portrait of a little tube-dweller hidden on the face of a brain coral. Kudos on a beautiful shot! 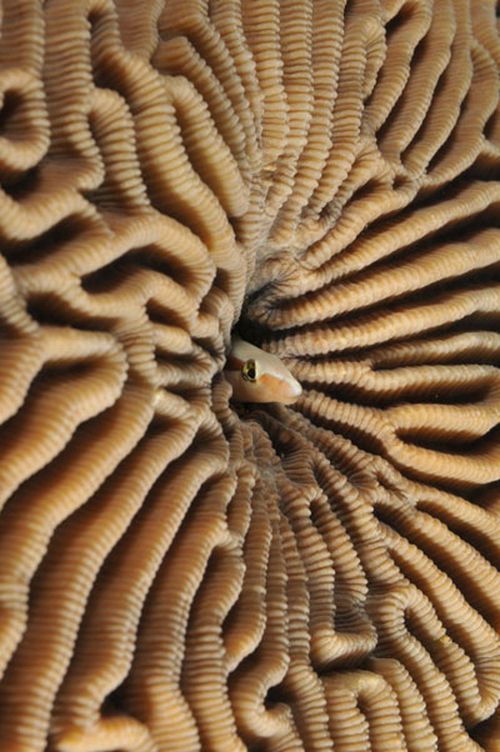 1st place "Amateur Category" by Ilan Ben-Tov
The Images of the World categories were up next, and were once again, full of stunners that must have left the judges’ heads spinning. I don’t see any possible way that the winners were decided in a unanimous manner, since they are all such high quality. Davide Vezzaro’s portfolio featured a few knock-out images, including a beautiful split-shot of a group of southern stingrays  and a cloudy sunset. 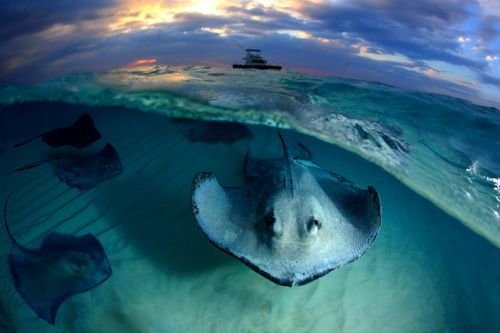 Images of the world winning winner - Davide Vezzaro
David Henshaw’s close-up portrait of a garden eel is also worthy of particular note, as I’m all too familiar with how difficult this shot is to get… especially achieving a perfectly dark background. Well done, David! 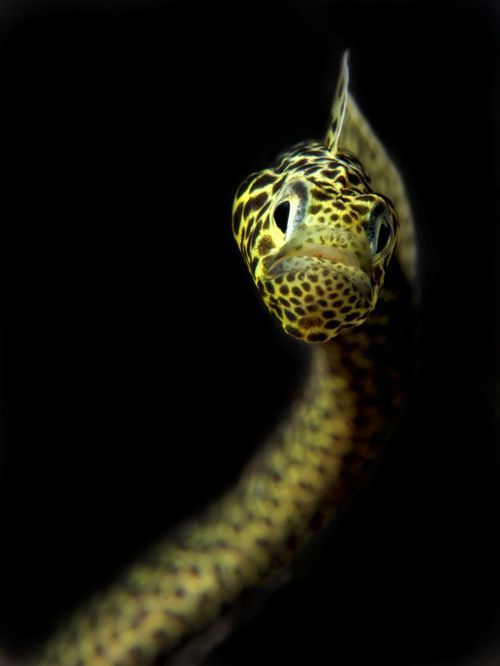 Photograph by David Henshaw
Israel’s own, Sharon Rainis, even picked up the “Best Humoristic Image” award in the international competition, with an image of a girl getting bubbles blown up her rear-end. I think it’s safe to say that courting rituals are a little different over here than in North America! 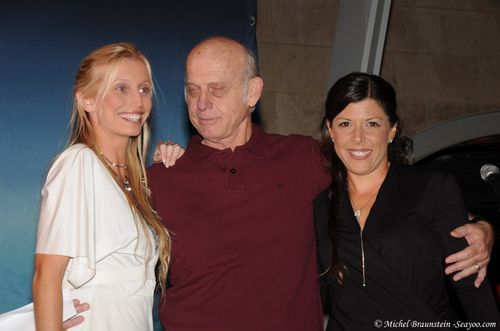 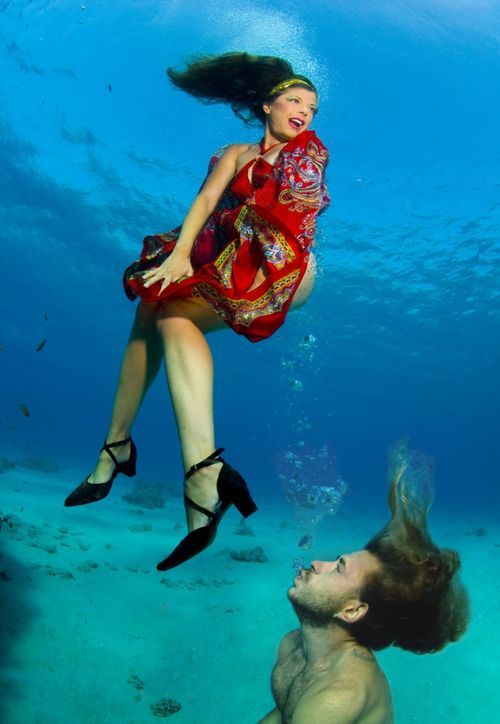 Humoristic category winning image by Sharon Rainis
Another winner in the Images of the world competition who happened to be at the ceremony, was Tobias Friedrich, who (enthusiastically) took the top prize in the “Wrecks of the World” category, with a shot of a plane wreck which is absolutely rich with mystery and atmosphere. 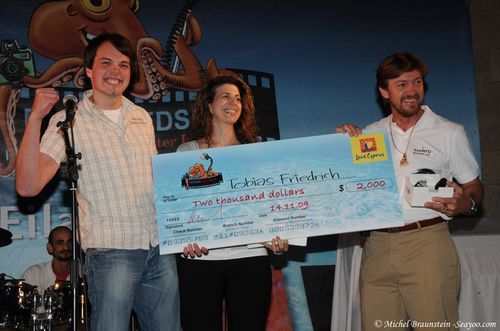 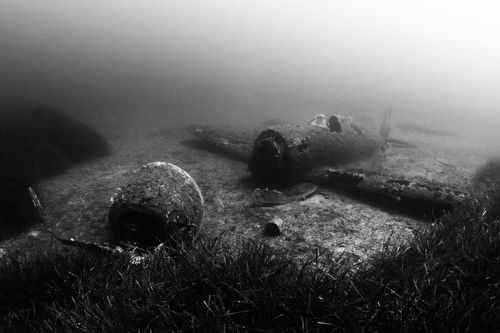 “Wrecks of the World” winning photograph by Tobias Friedrich
Once the international awards were finished, the presenters picked up right where they left off – with the “big guns” of the shoot-out competition. Taking the Mayor’s prize, which will be displayed on the cover of the competition album, was awarded to Mark Fuller’s double exposure of a posturing squid… which he captured in the last few minutes of the last dive on the last night of the competition! 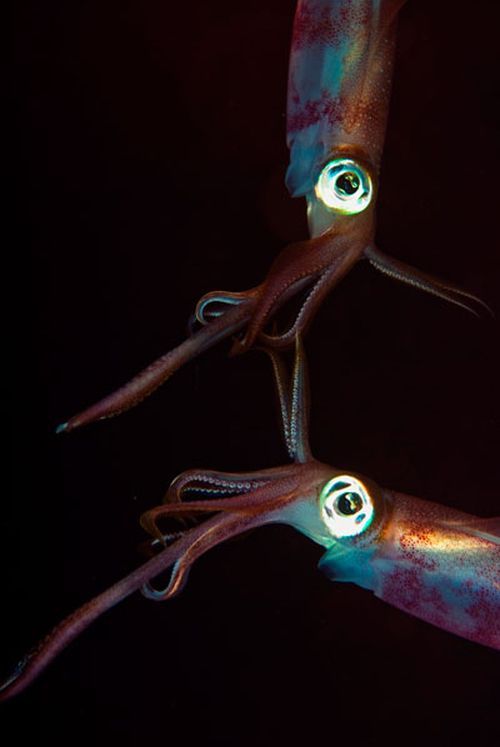 Mayor’s prize winner-Mark Fuller
Roni Soffer took the stage once again, to tell everyone that the “Behind the Scenes” category was eliminated from the awards this year. The judges unanimously felt that the quality of the images submitted to this category was far too low to award a $2000 cash prize! I think everyone was just too busy marveling at the underwater flora and fauna, and simply forgot about the equally interesting terrestrial component of Eilat! Roni went on to explain that the $2000 prize will be rolled over into next year’s “Behind the Scenes” category… maybe $4000 CASH will be enough of a motivation for people to take this category seriously? I know it’s got me thinking…

The “Fish of the Year” category winner was Pedro Carillo Montero, for his diverse portfolio of 5 images of the red grouper. I can’t imagine having to worry about photographing a portfolio of a particular fish, IN ADDITION to the “Best 5” and “Best Single” categories! Good job Pedro! 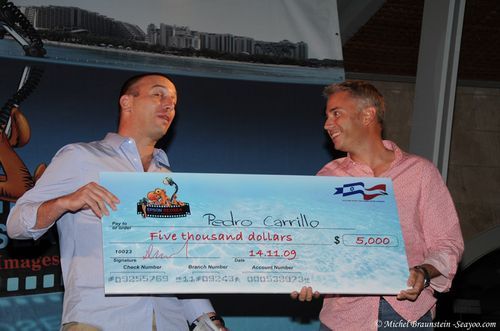 Pedro Carillo Montero accepts the  “Fish of the Year” prize 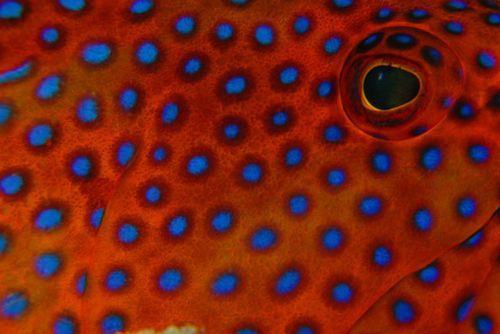 “Fish of the Year” image from the winning portfolio of Pedro Carillo Montero
Fredrik Ehrenstom won the “Best Singular Entry” with his behavior shot of a grouper that almost looks like it’s crying out a cleaning goby (come on, use your imagination!). Fredrik is a very talented photographer from whom I’ve actually drawn some inspiration from in the past. Congrats! 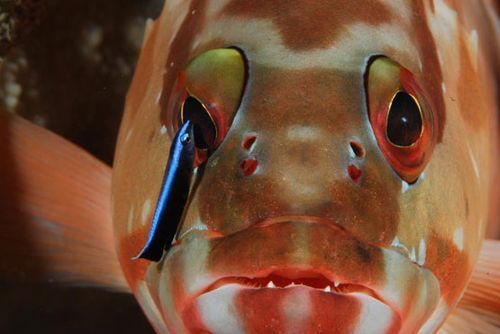 Eytan Nadel took the Video Clip category with a 90-second love story, starring two of the Manta Dive Center staff. He did quite a nice job, considering all shooting and editing had to be done before the same deadline as the still photographers – a total of 72 hours for the entire production! Check out his video here:


I was very lucky this year in the competition to take one of the top prizes – the Jury’s Prize. The winning image from this category is chosen from all images entered in all categories of the shoot-out, so I’m absolutely shocked and honoured to have had my image of a stargazer chosen. The other nominees are equally beautiful and unique images, so I’m sure the judges had quite a difficult decision on their hands – once again. 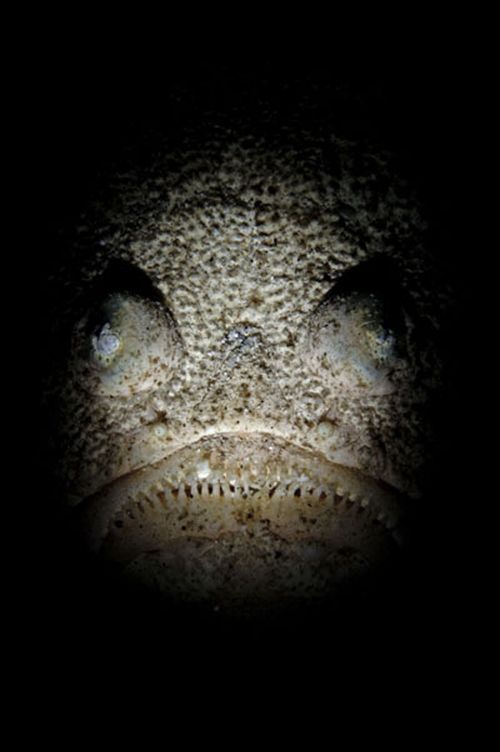 "Jury's Prize" winning image by author Keri Wilk
(Editor's note- Although it's not surprising that he won, DPG congrulates Keri on his winning image. Way to go, Keri. )
Last, but certainly not least, the grand prize winner for the “Best 5 Images” category was…….. Arturo Telle of Spain! His portfolio featured a variety of image styles which really set his above the rest of the pack. Using a circular fisheye, a mid-range zoom for the motion effect, and macro lenses for lizardfish and nudibranch portraits, his portfolio has a sense of completeness that reigned supreme over others. In a time when creating new images is getting more and more difficult, Arturo really managed to pull a few tricks out of his hat, and show us a refreshing set of images that I wish I could call my own. For his hard work during the competition, he is awarded $10,000 cash, 3 weeks diving in 3 resorts in Papua New Guinea, and return airfare to/from Singapore for two! I can only imagine the award winning images that he will create during that trip! 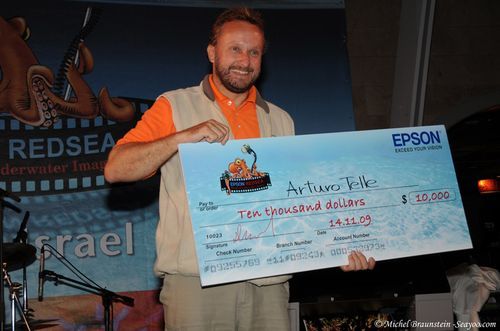 Arturo Telle accepts the big prize for his winning portfolio 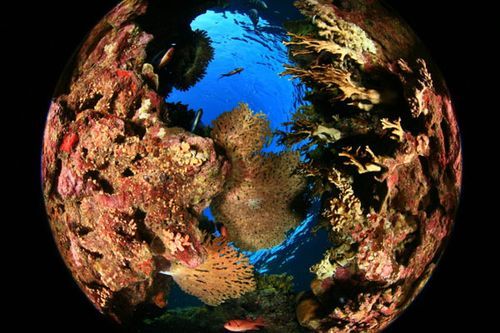 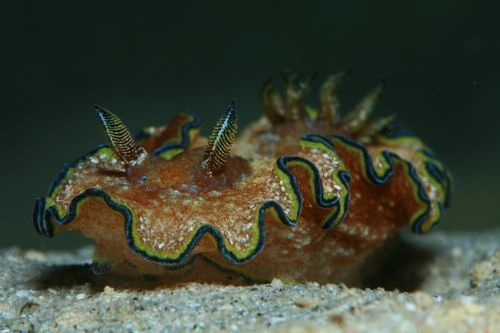 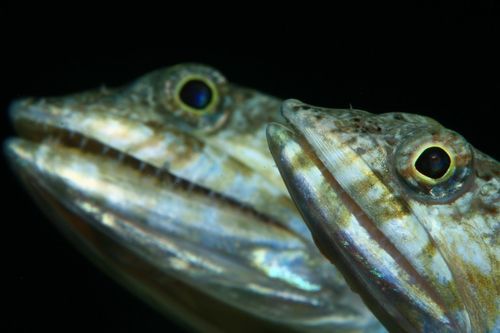 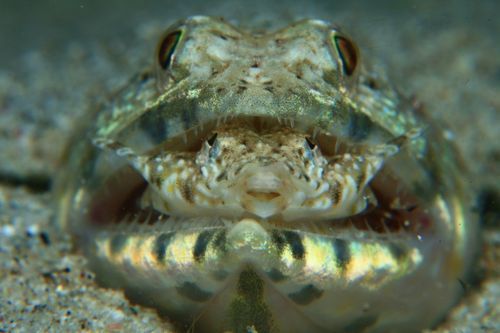 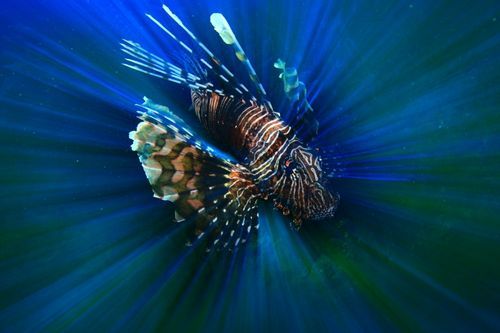 And with Arturo’s stunning portfolio of images, my coverage of this year’s Eilat Epson Red Sea competition comes to an end. If you’ve ever considered going to a shoot-out competition, this is the one I’d recommend. The prizes are huge, the environment is amazing, and the experiences I’ve had these past two years in a row have really changed the way I shoot for the better. Come join the fun next year, and maybe you’ll return home with a bundle of cash in hand – and if not – a smile on your face. 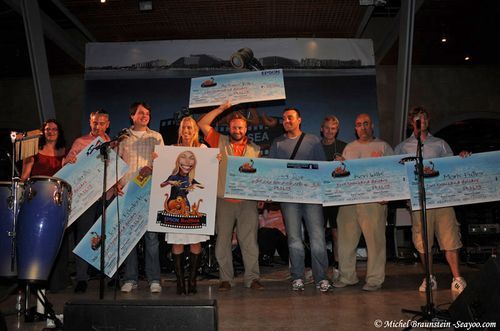 Matt J. Weiss wrote:
This shoot out looks like a ton of fun. Fantastic winning images.

Mark L Fuller wrote:
http://www.youtube.com/watch?v=2B1zqgtADrc
You must be logged in to comment.
Support Our Sponsors
Advertise With Us
Newsletter
Travel with us