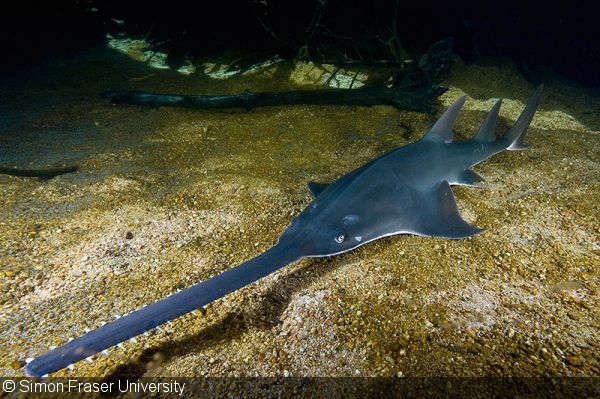 For the first time, sharks, rays and chimeras have been assessed for the EDGE of Existence programme. The conservation initiative focuses specifically on threatened species that “represent a significant amount of unique evolutionary history” and as such, the list, which comprises 50 species, contains many of the planet’s strangest sharks and rays.

“They have very few relatives on the tree of life, so they are very unique and losing them will actually represent a big, big loss,” marine biologist Fran Cabada told BBC News. Not only would losing these “living fossils” wipe out millions of years of evolutionary history, but it would also have a significant impact on other fish populations, since most sharks are at the top of marine food chain. Scientists are blaming fishing, habitat loss and water pollution, among other things, for the decline in the populations of species on the list.

The largetooth sawfish occupies the number one spot: The ray has been exploited for its fins as well as its toothed rostra, and bycatch is also a major threat. The other four living species of sawfish appear among the top 10 on the list. At number 5, the shark with the highest position on the list is the angelshark, a flat, bottom-dwelling shark that is easily caught in trawl nets. The list also contains other species more well known to divers, including the whale shark (17), sand tiger (19), great hammerhead (22), basking shark (23), great white (39), and the longfin and shortfin makos (47).

The full list can be found on www.edgeofexistence.org. The list was developed through funding by the Save our Seas Foundation, the Rufford Foundation and the Mohammed Bin Zayed Species Conservation Fund.

timeo chevalier wrote:
nice shark !
You must be logged in to comment.
Support Our Sponsors
Advertise With Us
Newsletter
Travel with us