DivePhotoGuide is very proud to announce that we will be collaborating with Asian Geographic Magazines and Edition Fifty Fathoms to release the first ever global underwater photography print magazine - Scuba Diver Through The Lens.

The magazine will be published quarterly by Asian Geographic in both print and digital format.  As you would expect from a collaboration from these three media companies, the content of the magazine will be of the highest quality, written by industry experts.  With an emphasis on techniques and "how to" information, almost all the content in each issue will be timeless, so if you pick an issue up 10 years from its publication date, you will still find all the information relevant.

There will be much more information in the following weeks about this exciting new project. In the meantime, here is the official announcement!

Scuba Diver Through the Lens will be published quarterly in both a print and digital format by Asian Geographic Magazines in Singapore and will be distributed globally through New York and Germany. 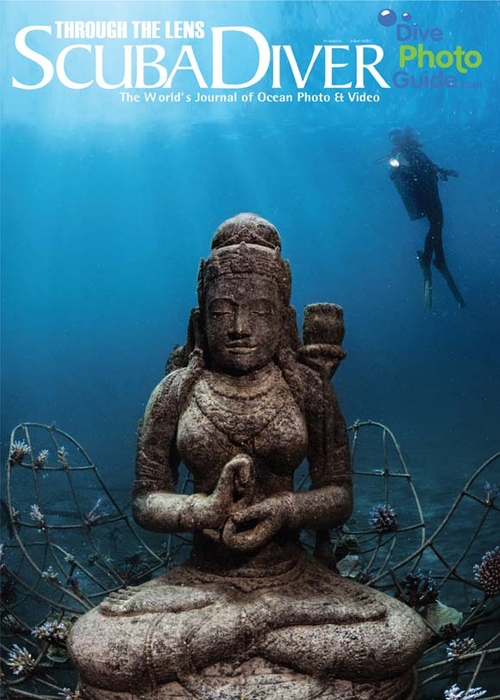 "Scuba diving is a huge part of the adventure-tourism industry and underwater photography has always been an important part of promoting the sport," said John Thet, publisher of Asian Geographic Magazines Pte Ltd and one of the visionaries behind the new title. "Most diving magazines on the market today cater to a small region, but Scuba Diver Through the Lens is special because it features content that is truly global. It's a great opportunity for all of us who want to see the sport continue to grow and thrive."

The new magazine is designed to educate the global underwater photography and videography community on equipment, technique and travel destinations as well as highlight the world's top underwater image-makers.

"We are very excited about the international aspect of this publication," said Matt Weiss. "Having three regional editors, all of whom are veterans in the industry, is an innovative and polycentric approach that will ensure global relevancy. Additionally, the content will be almost entirely evergreen, meaning the reader will get just as much out of any given issue whether they read it today or in ten years from now."

The first issue of Scuba Diver Through the Lens will be launched in November at the DEMA 2011 show in Florida, and will officially hit newsstands on January 1st, 2012.

Among the companies' six magazines titles, Asian Geographic Magazines Pte Ltd is the publisher of both Scuba Diver AustralAsia as well as Asian Diver magazines, the two most important and well-established scuba diving magazines in the Asia-Pacific region. With the recent success of the Scuba Diver franchise, which currently reaches about 90,000 readers per issue, the title has now expanded to include the Through the Lens title, as well as the online ocean portal at uw3some.com.

Other titles include the flagship magazine ASIAN Geographic, a vocal supporter of environmental, conservation and social issues; PASSPORT, showcasing the best of travel and adventure in Asia Pacific; JUNIOR, the only magazine about Asia that's dedicated to young ones; and THE READ, educating teenagers and young adults in a fun and informative way.

The Edition Fifty Fathoms is an annual Edition of the most famous underwater photographers worldwide. Starting in 2008, the Edition will be published 12 times. one for each letter in its name, or one for each number on a clock's face, as "Fifty Fathoms" also stands for the very first diving watch. This explains the company behind this most prestigious photographic magazine: Blancpain. For many, Blancpain is the finest watch manufacturer in the world, whose creations offer the utmost quality in watchmaking, thus transferring their picky philosophy about quality into underwater photography. Only 1829 issues are produced annually and only 1000 limited copies are for sale worldwide. Go to edition-fifty-fathoms.com to get more information on this fine art collectible.


Four Issues Per Year (Every 90 days)

Jeffrey De Guzman wrote:
Can't wait to get my hands on a copy.

Nicholas Samaras wrote:
This is Great News!! I hope that it will be also avelable in Greece!

James Forte wrote:
look forward to seeing a new worthy magazine on the market. The current choices in the US are pretty Bland.

Matt J. Weiss wrote:
Thanks for the kind words everyone. We are very excited about the magazine!

Enzo Troisi wrote:
I look forward too, I feel nice to know that it is still possible getting a stunning quality pressed magazine. Best wishes!

Ali Olaes wrote:
This is going to be amazing! So excited to see this!

Rick Allen wrote:
Can't wait to check it out - sign me up! Thanks for taking the initiative on this. As someone new to underwater photo/video, I can't even begin to say how hard it can be sometimes to find the technical information that I want to learn. DPG has been a valuable resource for me!
You must be logged in to comment.
Support Our Sponsors
Advertise With Us
Newsletter
Travel with us