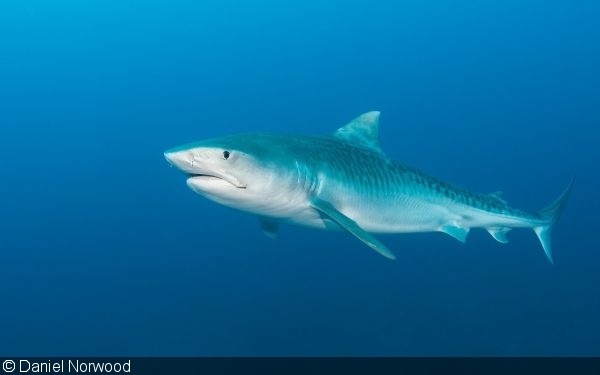 A tiger shark has bitten and killed a diver off Cocos Island, Costa Rica.

The unprovoked shark “attack” (we prefer the term "bite") happened to divers from the Undersea Hunter liveaboard. The female tiger shark followed the diver from the safety stop to the surface, according to a source with knowledge of the incident. The shark then bit the diver – whose full name has not been released – causing two severe lacerations to the extremities and eventual death.

Both the panga (skiff) driver and the divemaster attempted to intervene. The divemaster was bitten on the leg and is in serious but stable condition after recieving medical care following the 24-plus-hour crossing from Cocos to the mainland. As the Cocos Island rangers have yet to officially release the report, we are withholding the name of the source. [UPDATE: There is now an official report]

It is important here to note that such encounters are exceedingly rare. We share the news as it concerns the dive industry as a whole, not to perpetuate myths of shark veracity. It’s a shame to see hyperbolic headlines of this incident like this: “Tourist dead after killer shark RAMPAGE on popular holiday island."

Instead, let’s use this as a reminder of the inherent risks we take on as divers and underwater photographers—and the respect that the ocean and its inhabitants deserve.

DPG sends its thoughts to the victims and all parties involved.