Digital Camera Shipments Have Dropped by More Than Half Over the Last Year
By Ian Bongso-Seldrup, August 9, 2019 @ 04:00 AM (EST)
Source: No Film School 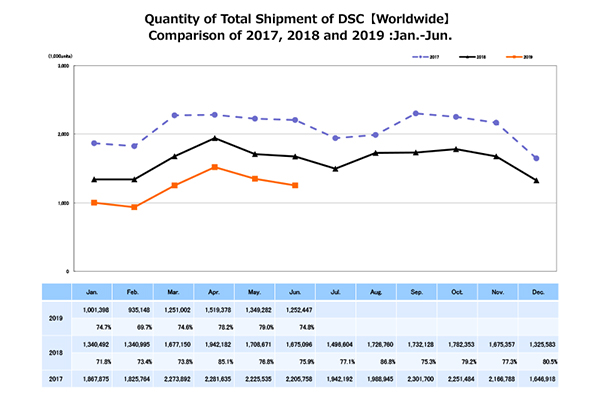 We underwater shooters may be enjoying exciting times, with constantly evolving tech giving us more megapixels, faster speeds, and better performance with each passing year, but the digital camera market overall is continuing to free-fall. The latest figures (PDF) from the Camera and Imaging Products Association (CIPA) shows a dramatic downward trend across camera categories. In the last 12 months, compact camera shipments have plummeted 88%, mirrorless camera shipments have fallen by 80%, DSLR shipments have dropped by 57%, and lens shipments have decreased by 67%.

The news is bad for all the major camera companies, with the latest financial reports from Nikon, Canon, Olympus, Sony, and Fujifilm making grim reading. Releasing its first quarter FY2020 financial results, Nikon reported a staggering 71% decrease in earnings and an almost 15% drop in revenue. Canon’s Q2 financial results show net sales are down almost 19% while profit is down 64%, compared to a year ago. Even Fujifilm, which has been enjoying a string of successes with its new APS-C and medium format models, has reported that revenue is down 15% while income has dropped 63%.

As well as citing the impact of smartphone cameras, companies have attributed losses to the prolonged US-China trade dispute, which shows no sign of being resolved anytime soon.