The Sea Tool housings are compact, ergonomic and uniquely designed. You can change memory cards, batteries, or lenses without removing the camera from the housing tray. The port release system is more like that of a camera than a housing. Sea Tool also had a Canon 40D prototype on display, and has plans 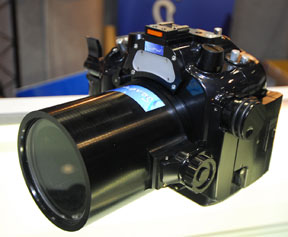 for a D300 and D3 housing as well. This is the first time we are seeing a production version of the Sea Tool D200 housing as well. The only other time we had an opportunity to report on it was at the Scuba Show 2007, when their D200 housing was still in prototype phase. I caught the Sea Tool booth just as the show was ending so I wasn’t able to enquire about and of the video housings (Sea tool makes housings for several Sony video cameras including the HC-7) or the port adaptors that I heard so much about (these adaptors allow you to use other manufacturers’ ports on Sea Tool housing bodies).

The housings are slick, look out for the relatively new brand.