We’ve been eager to see the new line of Sea & Sea housings, seemingly the first on the scene for the latest round of Nikon & Canon DSLR’s. We finally had our chance. Jon Davy and Andy Salmon showed us the new housings, and they’re all impressive, particularly the D300.

The housing body is machined from solid aluminum block, has fully 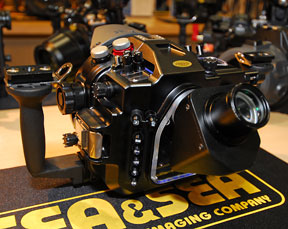 re-engineered ergonomics that allow each button to be easily accessible by thumb or forefinger, multi-functional levers, and even an anti glare coating on the LCD window for better display amidst the demanding environments out in the field. The D300 should ship around January 3rd.

There was no D3 housing on display or in any of Sea & Sea’s marketing materials, however, we were told to expect it around March. 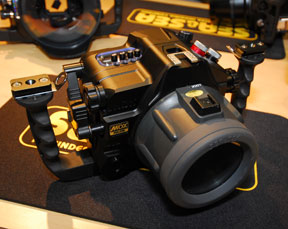 ergonomic, just like its Nikon counterpart. The 40D should also ship in the beginning of the year. The housing for the 1Ds Mark III is available now and also sports some of the cool and innovative features representative of Sea & Sea’s new line. 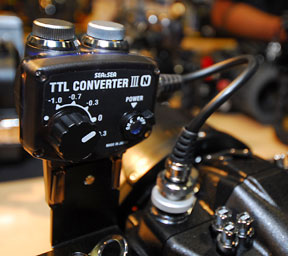 Also on display was the new TTL Converter III (retails for about $599). The unit has been completely reconfigured. It’s smaller than the last TTL converter, with the sync cord connectors on top versus the sides, a new battery compartment, and separate 5 pin Nikon cords and 6 pin cords for Canons. It is important to note that the current TTL converter will not work with the new YS-250’s. A new YS-250 TTL Converter will be shipping soon, made specifically for the new top of the line strobe. Unfortunately the TTL converter only works between Sea & Sea brand housings and strobes.

Speaking of the YS-250, this strobe should be a popular one. Kudos to Sea & Sea for the 12 power settings on a rather compact unit with the output equivalent of the YS-350. The Ni-Mh removable battery is significantly smaller and lighter than the older YS-350’s, saving some ever more valuable allowable luggage weight for more equipment. A small LED focusing light can be turned on and off with the press of a conveniently placed button, and the unit is wired for fiber optics, for use on compacts and otherwise, in addition to hard wiring for SLR’s. When used with the new YS-250 TTL Converter, the strobe also provide an audible TTL confirmation. 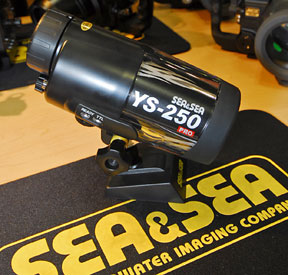 Last but not least is the rough and rugged looking 10 mega pixel compact Dx-1G. When paired with a mid power strobe such as the YS-110, this complete package offers an affordable alternative to larger SLR systems. 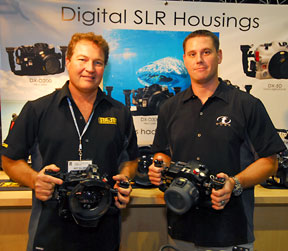 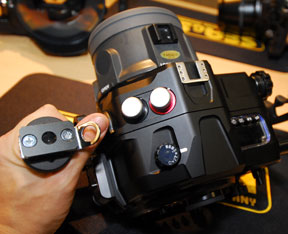 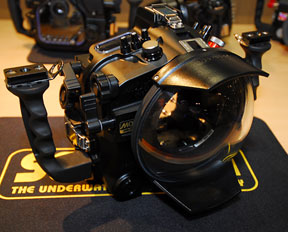