Keldan
Things got fluorescent at the Keldan video light booth this DEMA. The company has released an ultraviolet LED module that is compatible with any of the company’s video lights and is used to illuminate underwater fluorescence. 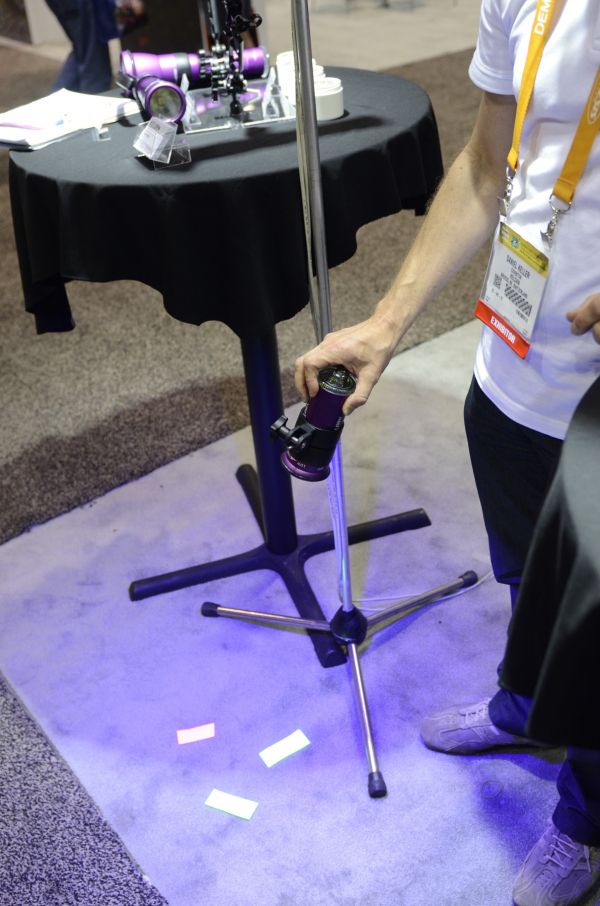 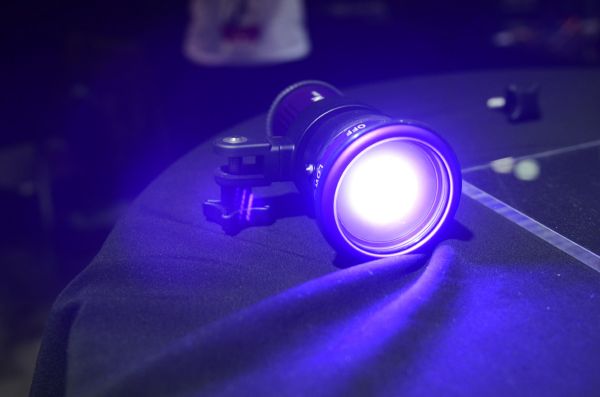 We also learned of soon-expected upgrades to LED performance, including a 15 percent increase in lumen output

Nauticam
Nauticam had more new gear than we could shake a stick (or strobe arm) at. So let’s dive right in…

Nauticam Super Macro Converter: Nauticam’s Chris Parson’s described this as “not your simple diopter.” It takes into account the water interface and maintains the working distance by adding a magnification of 2.3:1. It will be available within the month for a price tag of $480 in both flip and 67 thread. 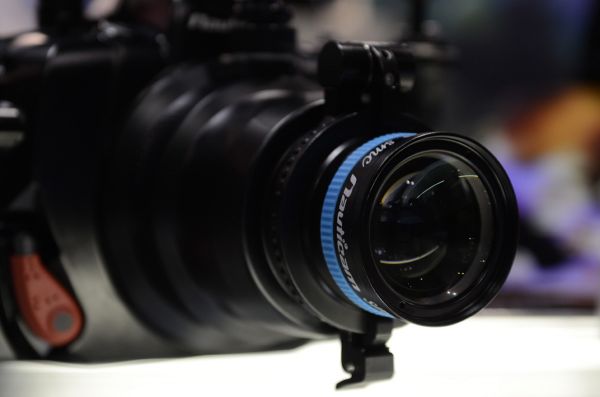 LCD Magnifier: If you want to use your compact camera to shoot video, or simply want to get a better view of your playback screen, this LCD magnifier will make you feel like you’re wearing those glasses that play movies. 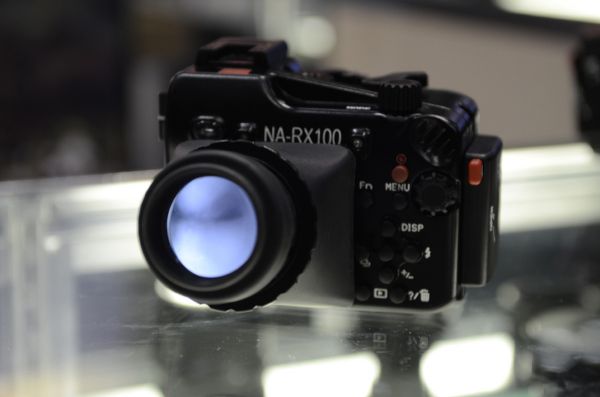 - New Leak Detector: As is the latest trend in the industry, Nauticam has incorporated a pressure sensor to help warn of leaks underwater. Compatible with any vacuum system, this new leak detector will be available with any forthcoming new housings.

Compact Housings:
Nauticam unveiled numerous new compact housings. For the photographer looking for the SLR-type construction even for their compact camera, Nauticam’s housing provides access to all controls in a durable aluminum construction. 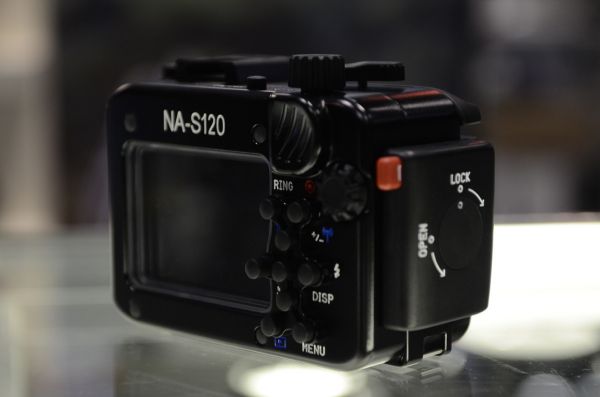 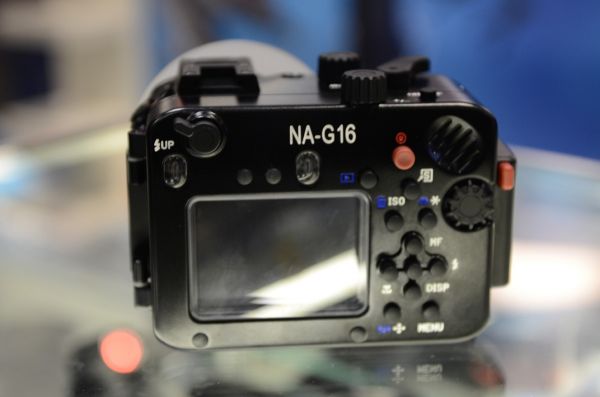 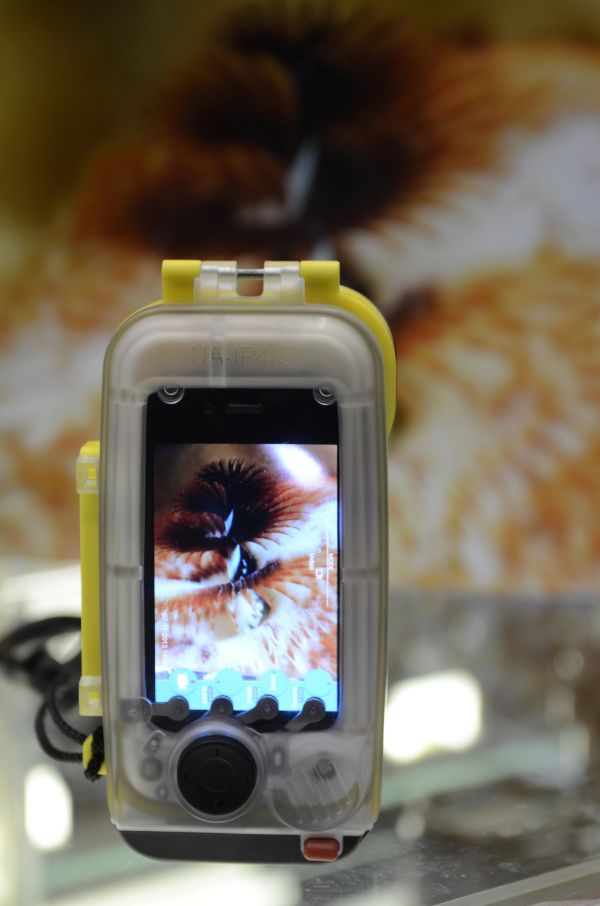 On display also was a prototype for the new Olympus OM-D E-M1 four-thirds camera. This housing really blurs the line between compact and SLR housings: It comes with an attached set of handles for stability and a more extended shutter button for easy cold water shooting.

The housing for the E-M1 is expected to be available by the end of the year. 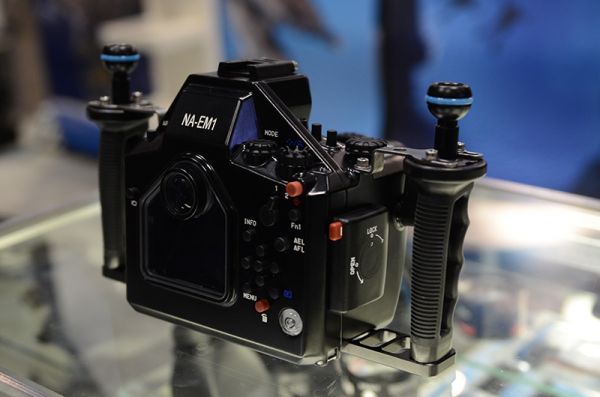 - NA-70D: Chris confessed that the Canon 70D boasted the best underwater focusing ability he’s seen out of an SLR. Nauticam’s housing for the 70D is now shipping. 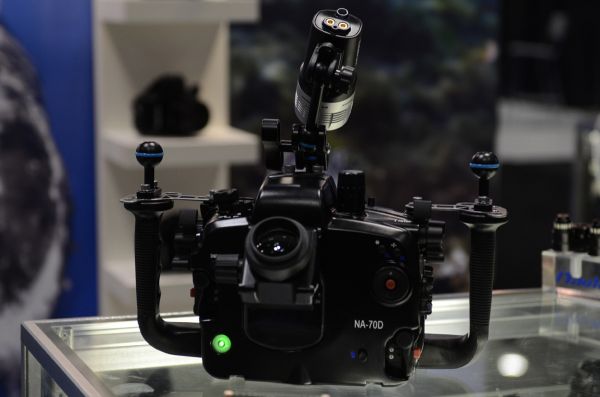 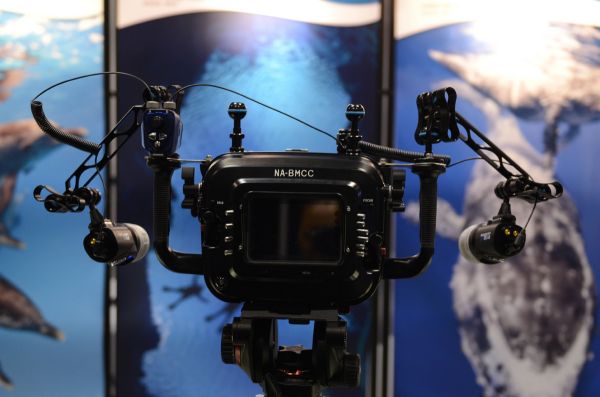 XIT 404
The underwater imaging accessory specialists are known for providing a variety of lens rings for manual focus/adjustment. At DEMA, they announced a ring for the NEX-7’s 16-50mm lens, and it’s likely we will see more lens support in the future for these and Olympus mirrorless compact cameras. 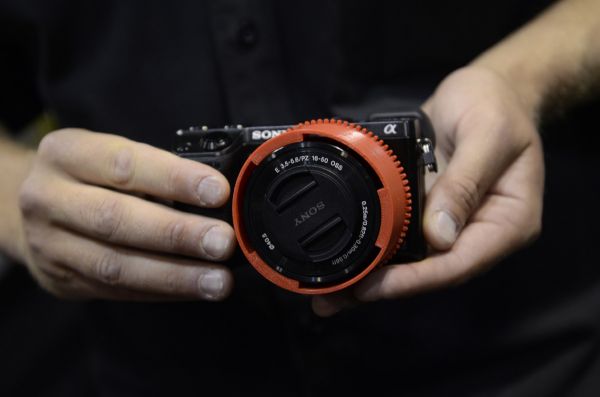 We also caught a look at XIT404’s new quick release ball clamps, suited for easily removing strobes for off-camera use. 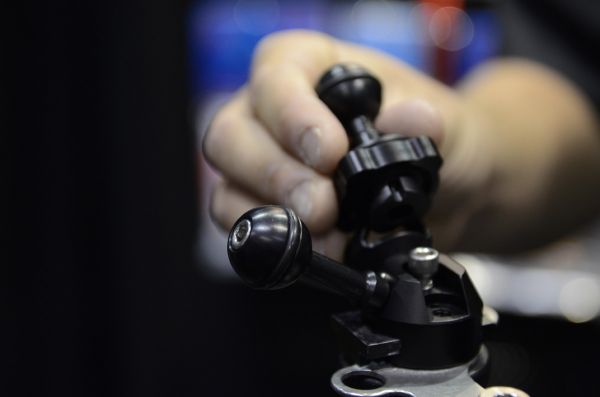 Seashell
Right across the way from the DPG booth, Seashell had on display their polycarbonate housings for compact and mobile phone cameras.

Seashell’s latest mobile phone housing is for the Galaxy S3 and S4. Depth rated to 120 feet, these housings feature an anti-reflection optical lens that comes with a variety of accessories, like wide-angle wet lenses and red filters. The housings are available for $159. 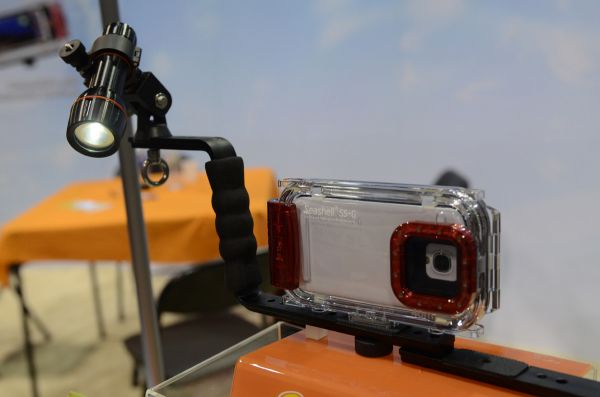 Gates
The big news at Gates is the future release of their new generation of video lights. The 2000-lumen Generation 2 Video Light boasts some neat improvements, such as battery/power indicators on both sides of the light so you’re informed regardless of their position.

Other changes include a slightly flat design to prevent the light from rolling and a switch to slightly negative buoyancy to reduce size and increase compactness for travel. The lights are expected to be available next spring. 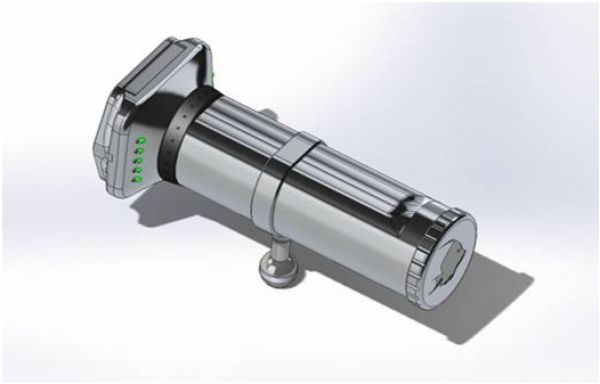 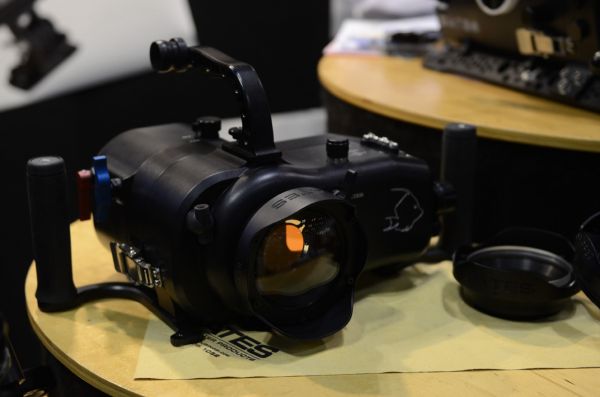 Don’t be fooled by the name Handycam—the latest in the line (Sony XA25) features HDSDI output and 35 mb/sec write speed.

Sights of the Show Floor 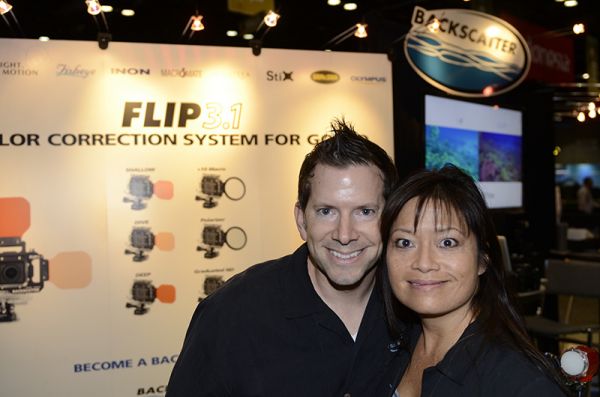 Joel and Jennifer Penner from Backscatter 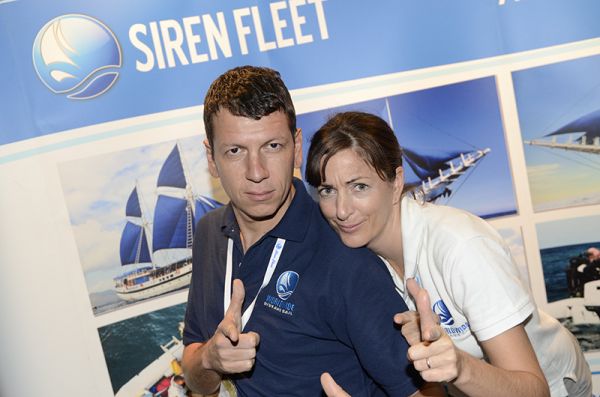 Susie and Mark from Worldwide Dive and Sail keep it cool 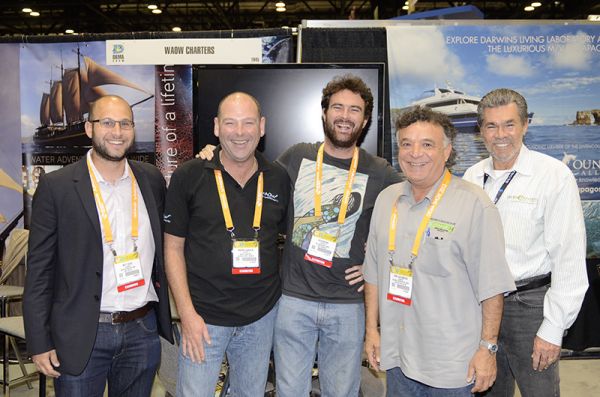 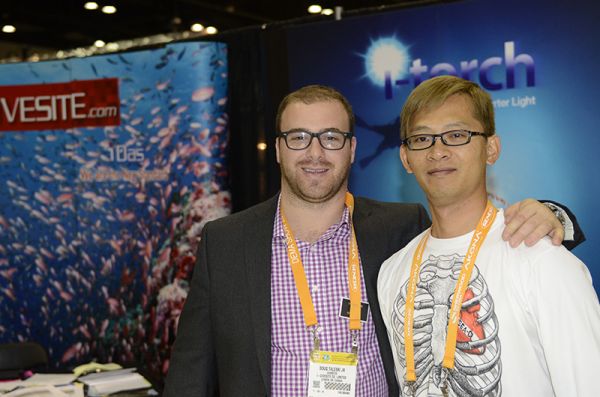 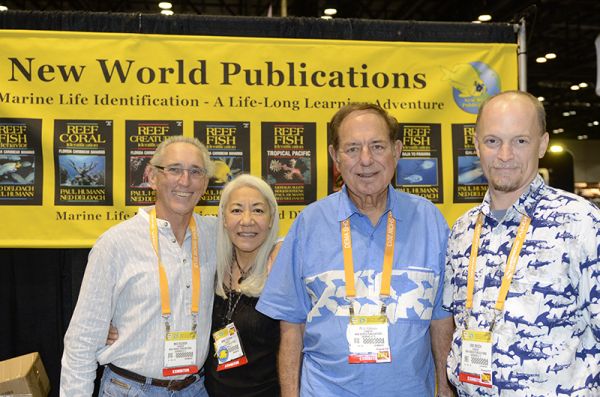 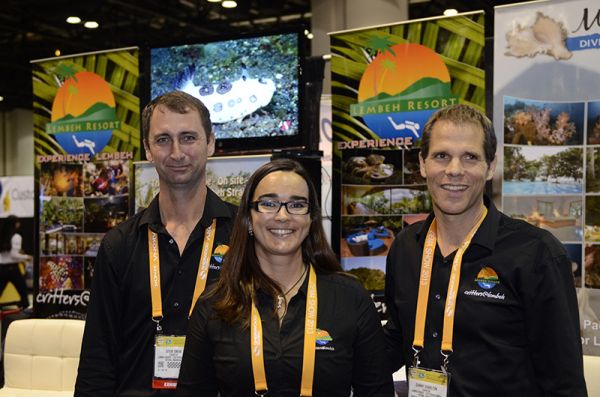 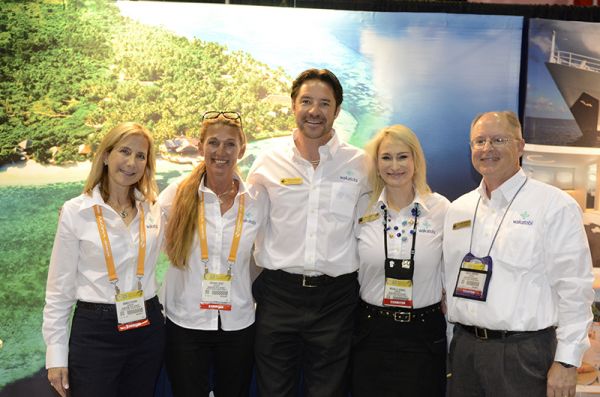 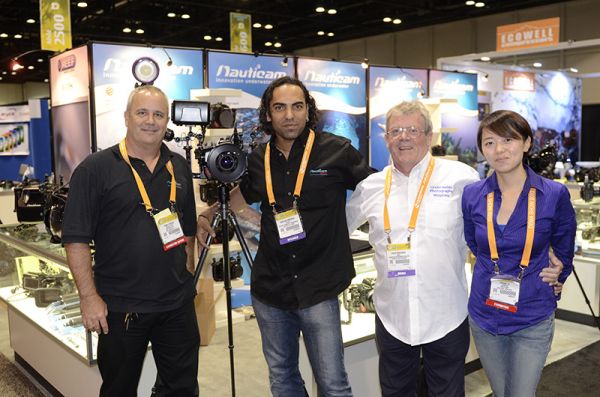 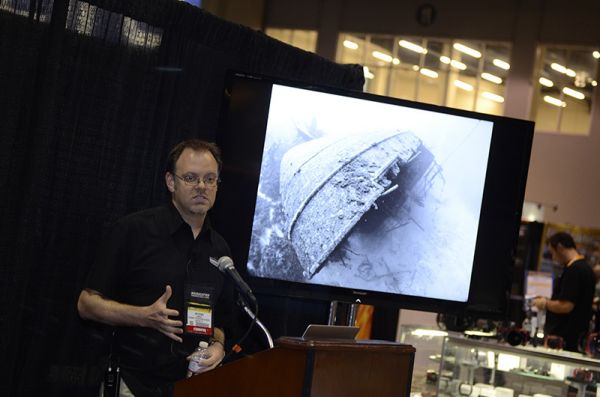 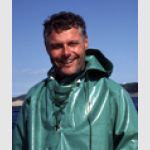