Ikelite’s booth featured some of the latest compact and SLR housings, along with a selection of lighting accessories.

Ikelite’s housing for the Canon G16 compact comes in two versions: One with built-in TTL circuitry, and the other with two fiber optic connection ports. The latter features a drop and load system, while the first comes with a tray system similar to SLR models. 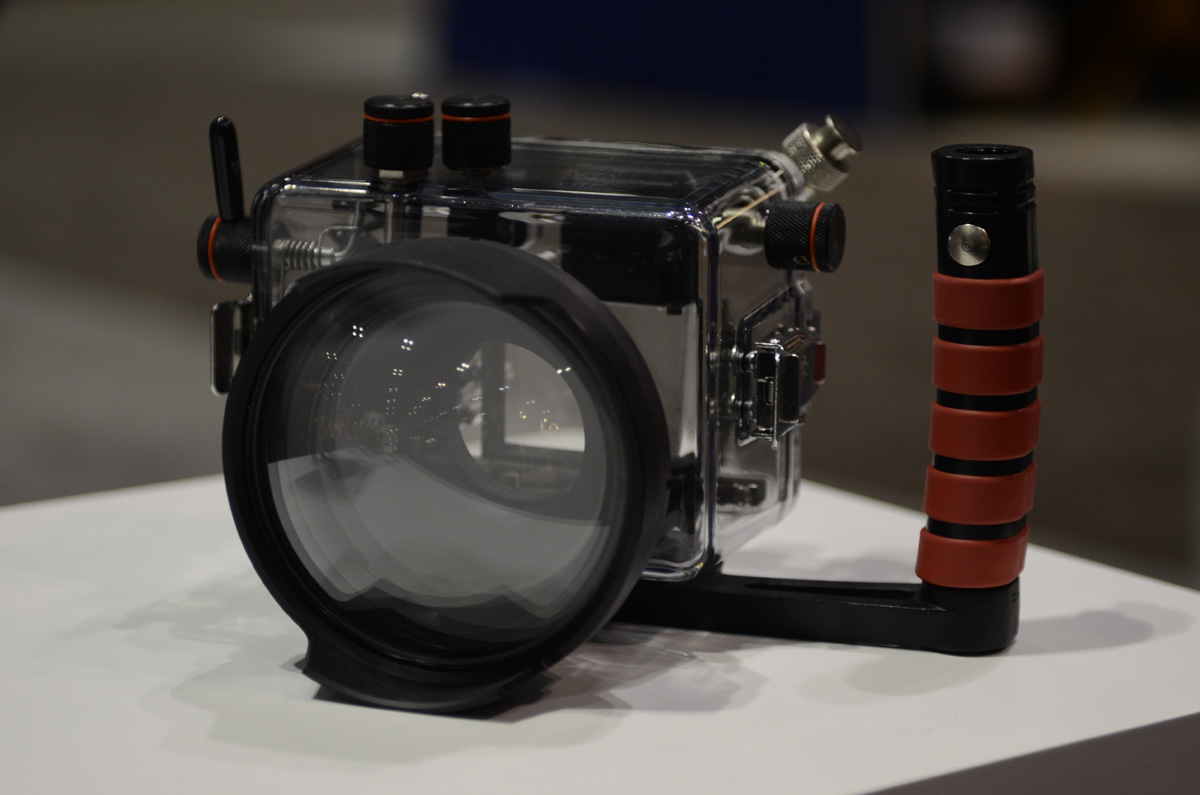 Ikelite also had on display their housing for two other new compacts: Canon’s S120 Powershot and the Sony RX100 II. These housings come with a low price point and features a built-in fiber optic connection designed to work in tandem with their new Manta strobe. 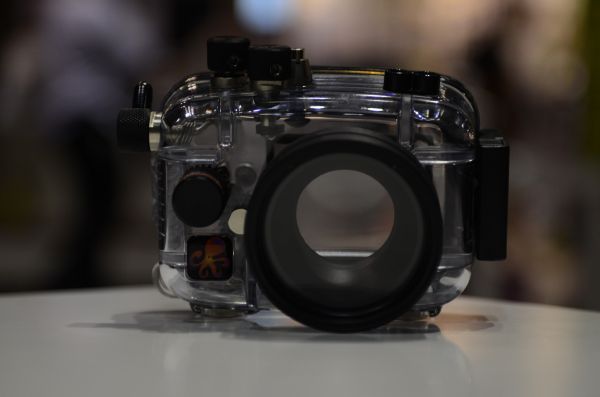 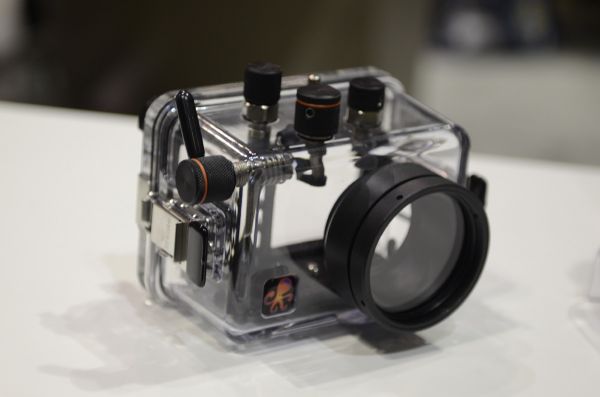 Speaking of light, it’s hard to ignore the “sexy” looking Gamma, a dive/focus/macro video light with some nice curves. 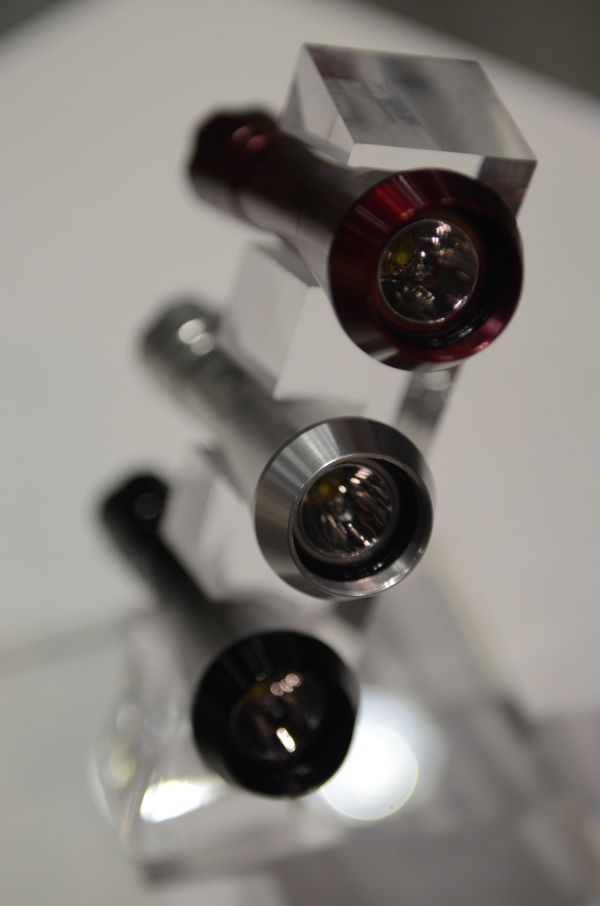 In terms of SLRs, Ikelite is an early arrival at the Canon 70D party with a housing of their own. The housing comes with all the standards you’ve come to recognize with Ikelite like built-in TTL circuitry and a polycarbonate material making visual inspection of the o-ring stress-free. 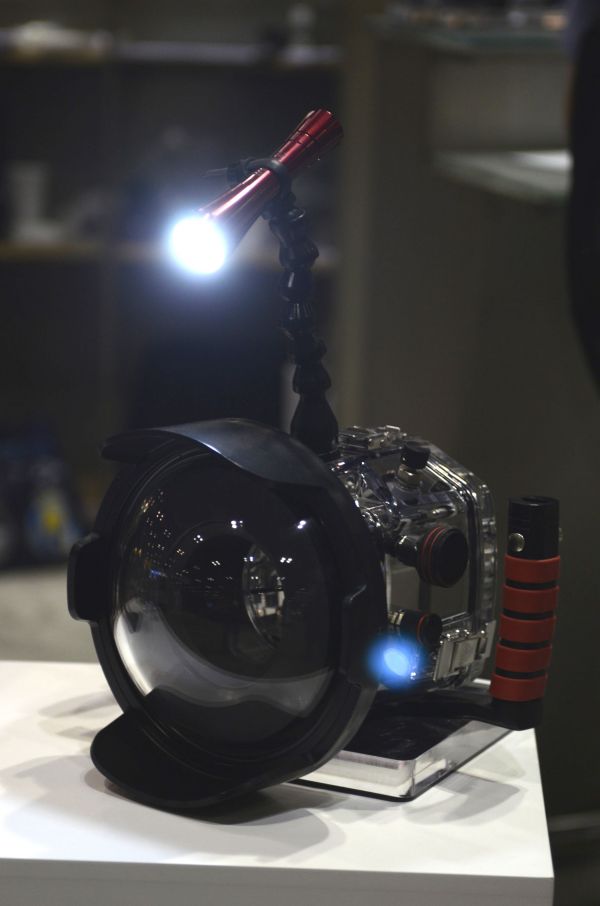 One of the common thread among underwater photo equipment companies was their take on a housing for Canon’s new 70D DSLR. The camera comes equipped with a 20.2MP APS-C sensor, built-in WiFi and Canon's 19-pont AF system. 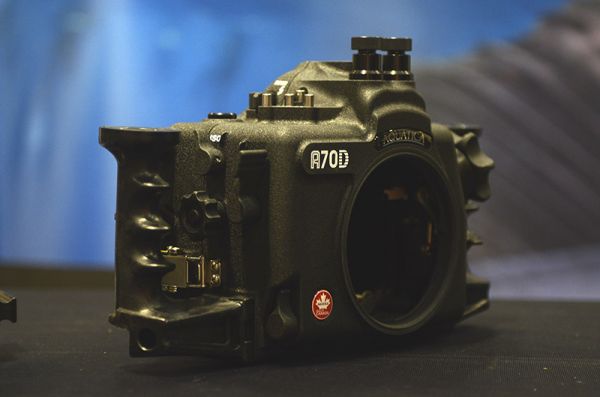 Aquatica’s housing for the 70D debuted at DEMA, with some slight improvements over its predecessor: more space between buttons to avoid clutter when manipulating with gloves in cold water diving, an extended knob for the all-important quick command button and a new gear system for firmer contact with the camera.

The 70D and all future models will include Aquatica’s new moisture/pressure alarm. Just use any handheld pump to create a vacuum in the housing and the new sensor will indicate changes in pressure with a blinking green to red light. 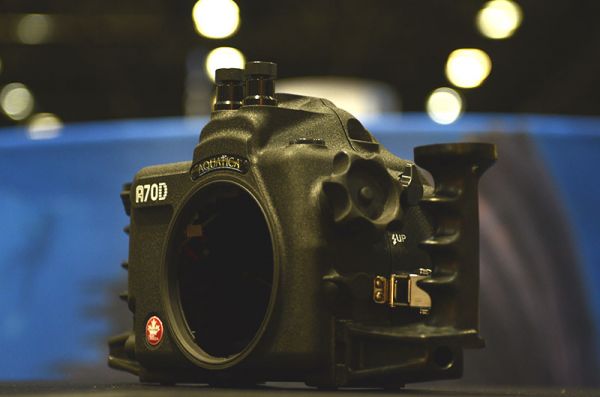 The alarm still includes a moisture detector, to pick up any drops of water that may enter the housing.

Also in the near-future is an Aquatica housing for the soon-to-be popular Olympus OM-D E-M1 micro four thirds camera. Aquatica’s Jean Breneau hinted that this housing will be indicative of the company’s move to make housings for more micro four-thirds cameras 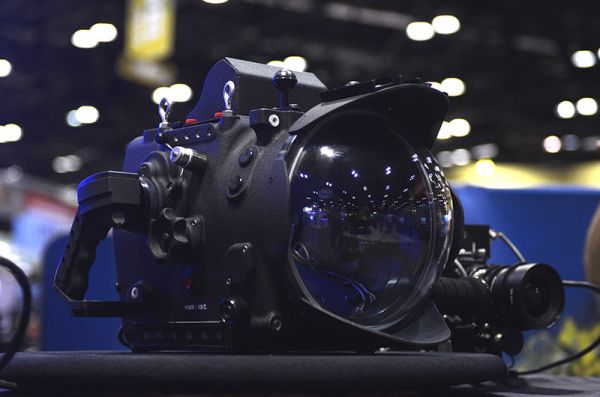 Who doesn’t like a piece of eye candy? The Amphibico (video housing company that merged with Aquatica two years ago) Rouge housing for the RED camera systems is the only such with two viewing windows to accommodate both the Samurai Blade recorder and the LED viewing screen.

Light and Motion
Light and Motion debuted their new line of GoBe modular lighting system. The GoBe is designed to be compatible for both underwater and topside use, making it distinct from virtually every other dive light in the industry. 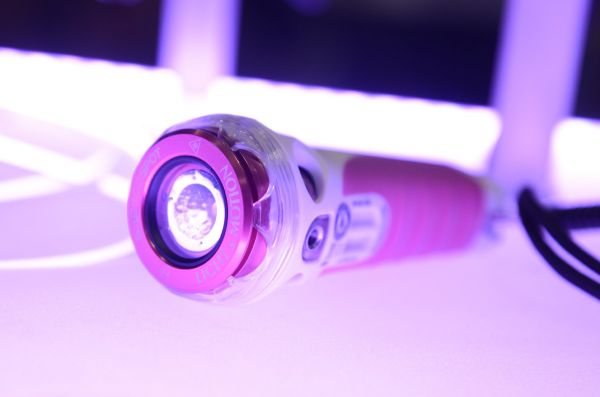 In addition to the topside/underwater compatibility, the GoBe is a modular system with color-coded different LED attachments, including 700-lumen and 500-lumen spot/wide variations. One version will come with a bigger battery life, and the other with a slightly less. 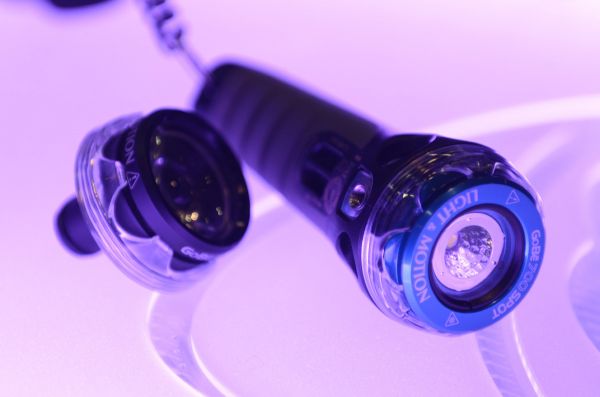 One cool feature about these focus/video lights is the ability to charge using a USB port. 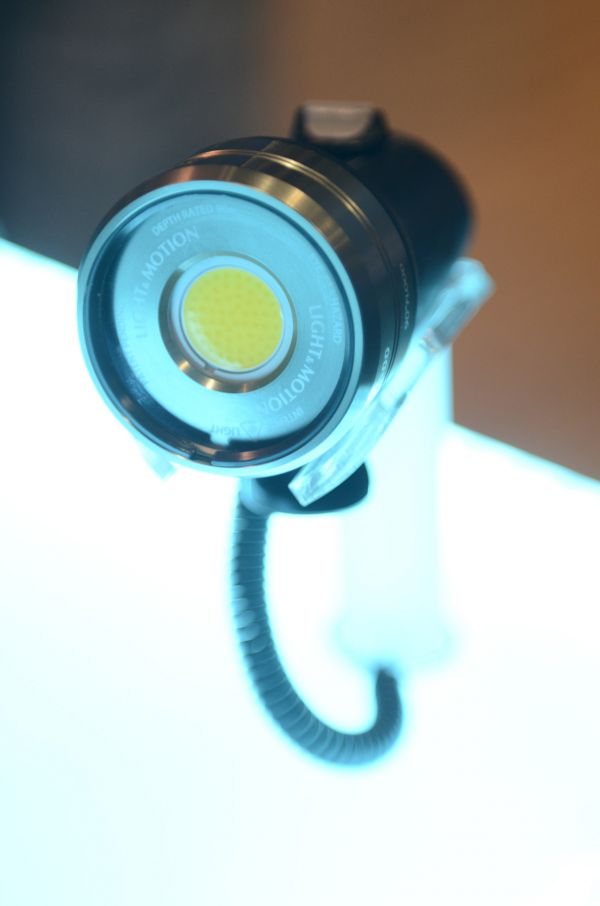 The big news at the Sea and Sea booth (coming from a S&S devotee) is the inclusion of a fiber optic TTL converter in the company’s latest housings for the Nikon D7100 and Canon SL1. 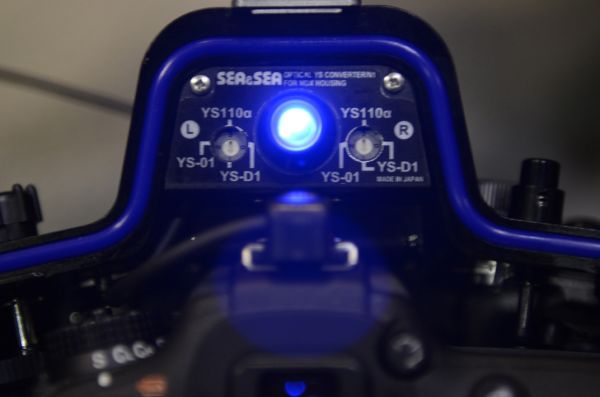 This optional add-on comes with a price tag of $500, but allows users to still retain the benefits of fiber optic photography while limiting the cons (long recycle times of popup flashes and shortened battery life). An exterior button allows the user to switch between manual and TTL modes with the converter.

The converter can be configured with Sea and Sea’s YS-D1 and YS-110a strobes and will be compatible with any new housings announced. 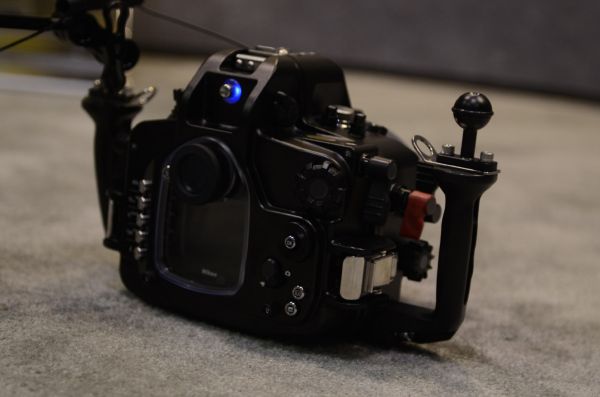 With the converter also comes the reveal of new fiber optic cables. The cables come in long, medium and short lengths and have multiple fiber optic strands inside to improve durability and performance.

Away from the accessories, Sea & Sea also had on display their latest and greatest housings, including those for the Nikon D7100 and Canon RDX-100 and 70D (expected in December). 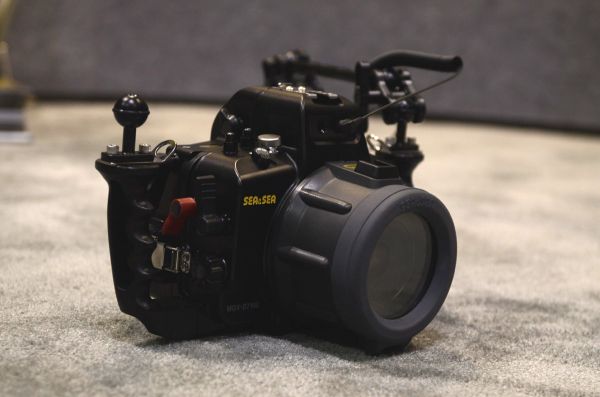 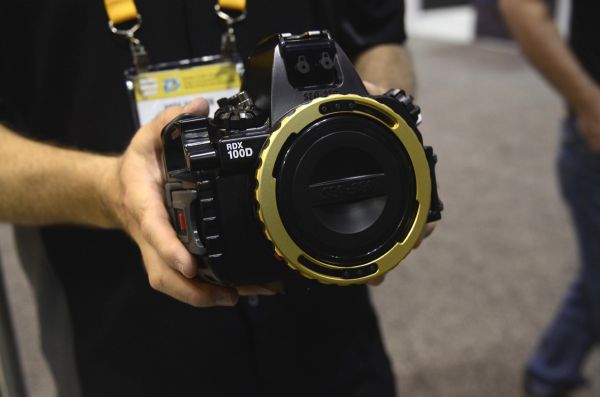 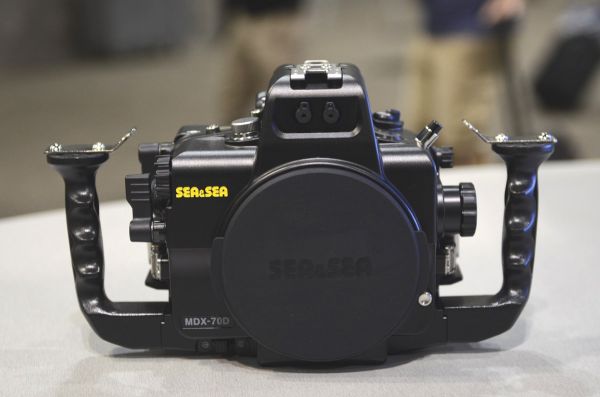 Their futuristic-looking video lights are only prototypes, but promise some exciting features: a dome port that helps increase the beam angle to 120 degrees and up to 2500 lumens of power in a super light form (.4 lbs). 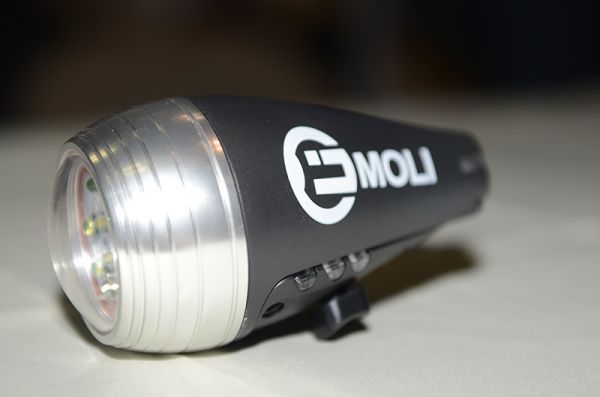 One cool innovation is the “infinity mode,” software that allows photographers to get the most time of consistent light possible out of their Moli—upwards of eight hours.

Although the current prototype is rated at 1600 lumens, the company hopes to release 2500, 1400 and 900-lumen versions in the future. Final products are expected to be available in January. 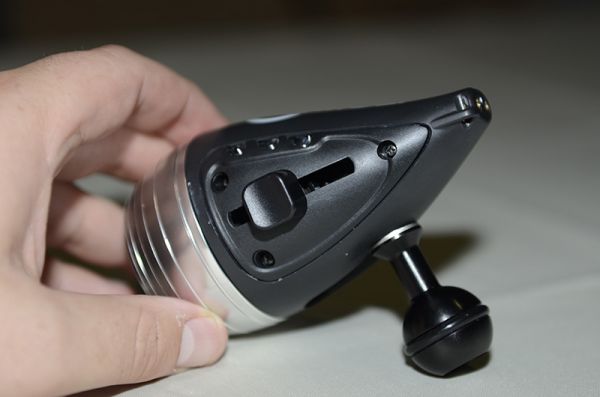 i-DiveSite
i-DiveSite just took underwater GoPro usage to the next level. Their i-Pix GoH# for the HERO 3/3+ with external battery pack can give your GoPro up to 3 hours of battery life even while using an LCD.

The GoH3 housing can be attached to a monopod or a tray, while the compact battery pack attaches just like a focus light. 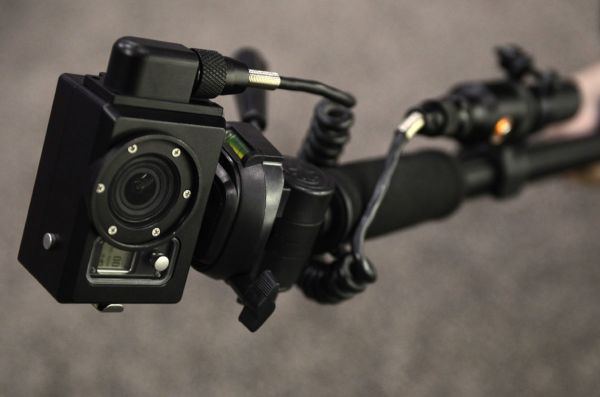 We also loved the design of i-divesite’s modular buoyancy floats, which can fit over virtually any type of arm system. Just one block has almost half a pound of buoyancy! 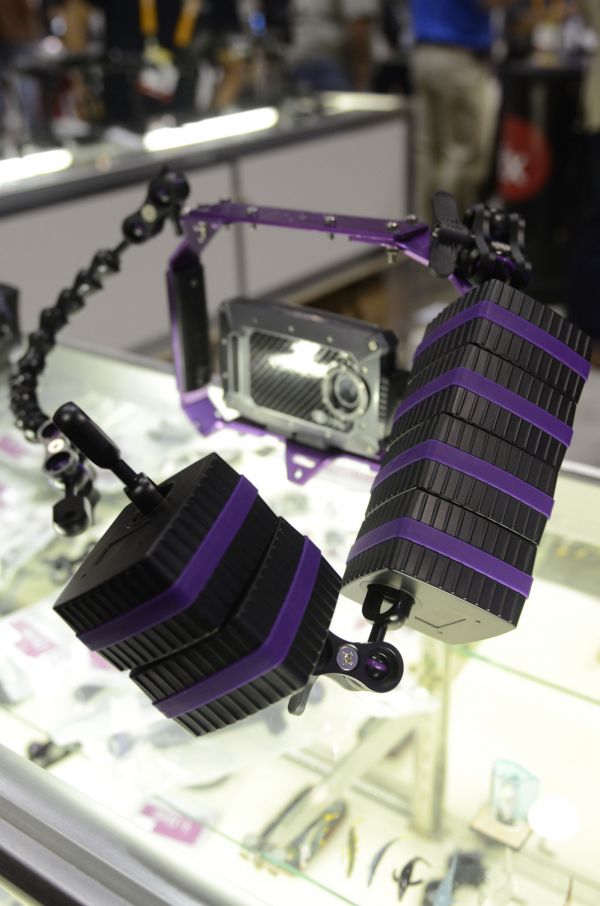 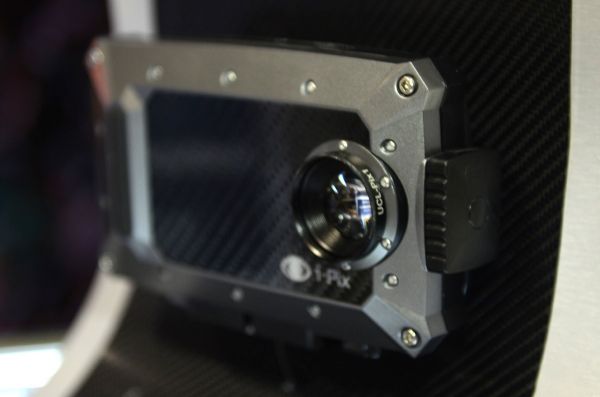 Fantasea
At the fantasia booth, we caught a glimpse at their recently announced housing for the Canon G16. Fantasea focuses on top-level compacts like the G16. Their housing provides access to all controls and is depth rated to 200 feet. The housing is supported by all the company’s compact accessories, like the popular wide-angle wet lens. 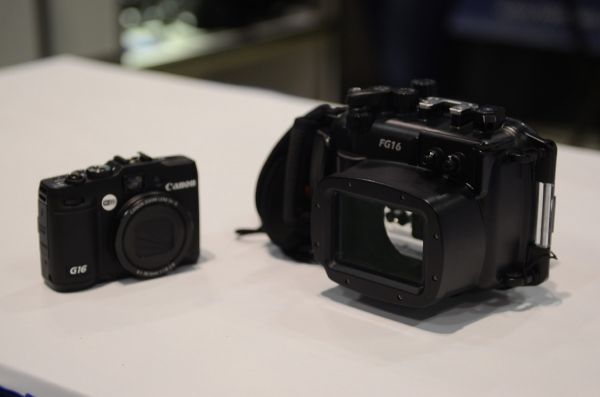 Fantasea’s Blue Ray lights provide an affordable, yet powerful way for compact users to add light to video or use continuous light for still photography. 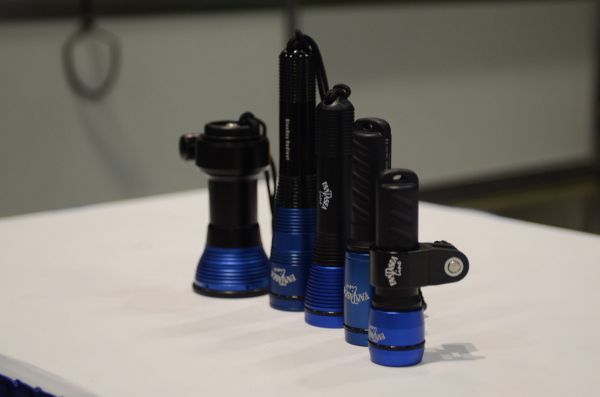 Aquapazza
If you like colors, you’ll love Aquapazza. This housing company is known for its vast array of color options for housings. The latest housings include those for the Sigma DPM and NEX 5T. 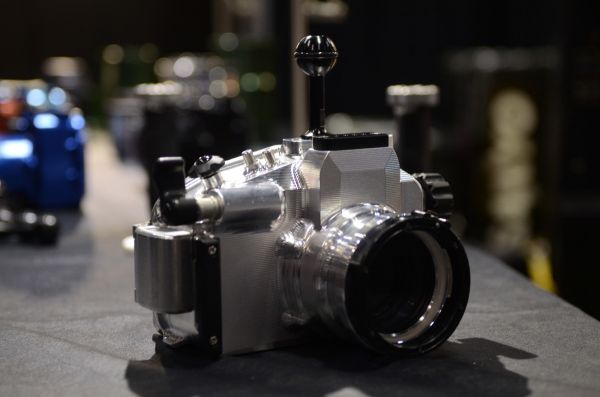 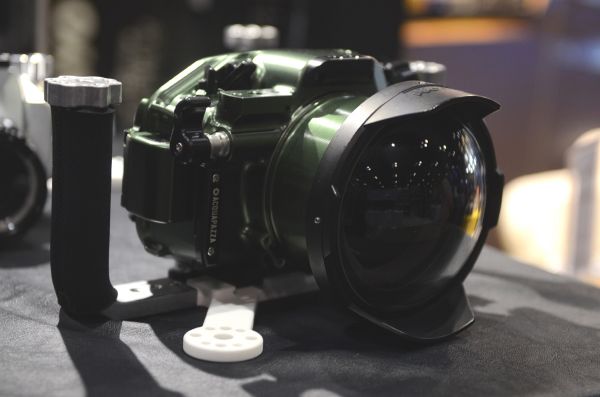 We also got a look at a neat new tray, which actually provides three separate strobe/light mounts. 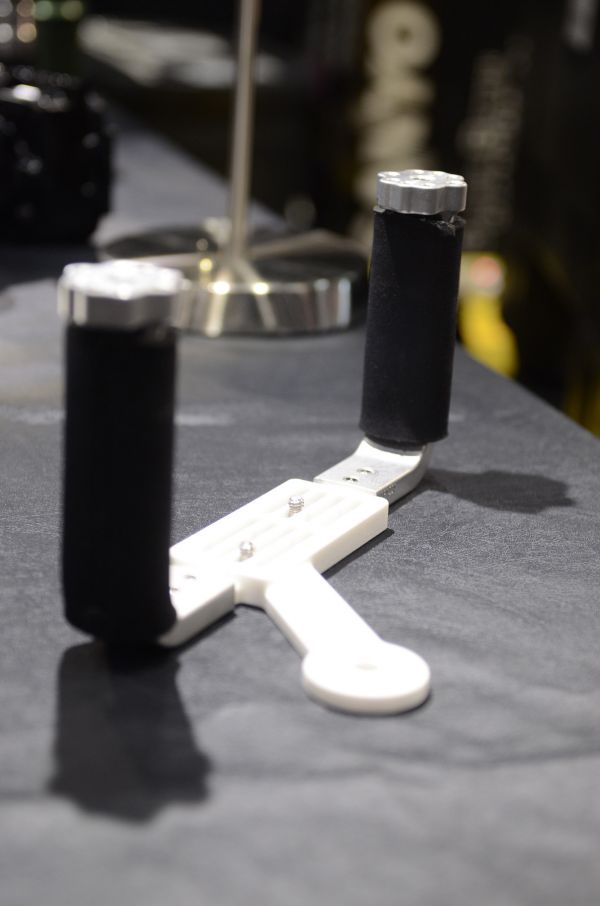 Ultramax, a underwater imaging manufacturer specializing in entry-level shooters introduced their new Ultrapower video light. At 1200 lumens, this video light features three steps of power, an impressive 2-hour burn time and a low price point of $350 as an affordable option.

The Ultrapower features a unique flat design used to save space and keep the light more compact for the tight-space traveler. 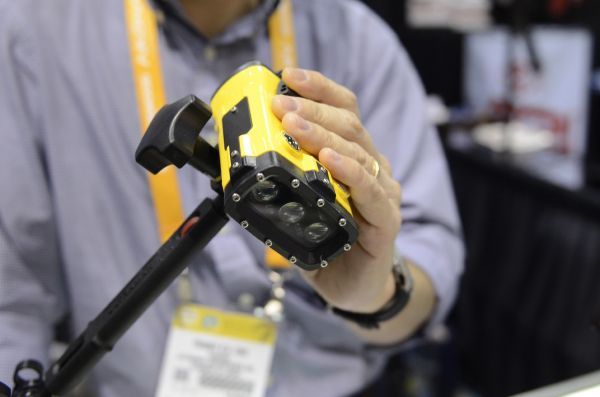