What’s up Orlando? DPG’s back in town!

That’s right, DEMA 2013 kicked off this morning with a bang—a brand spankin’ new redesigned DPG. No, you aren’t going crazy: We’ve redesigned the website with a clean modern, aesthetic to showcase the amazing images from our readers and contributors alike.

You can read more about all the amazing changes in our “Relaunch Guide.” Of course, there were tons of other new products to be showcased at DEMA. So DPG hit the show floor today to check out the goods.

Always worried that your housing is going to leak? Backscatter has a solution for you. We watched a demonstration of their new “Airlock Vacuum System,” the manual pump that creates a pressure-tight seal. This not only ensures that the housing is fully sealed, but also creates a suction effect that prevents the housing from opening easily in the rinse tank or at the surface after a dive. 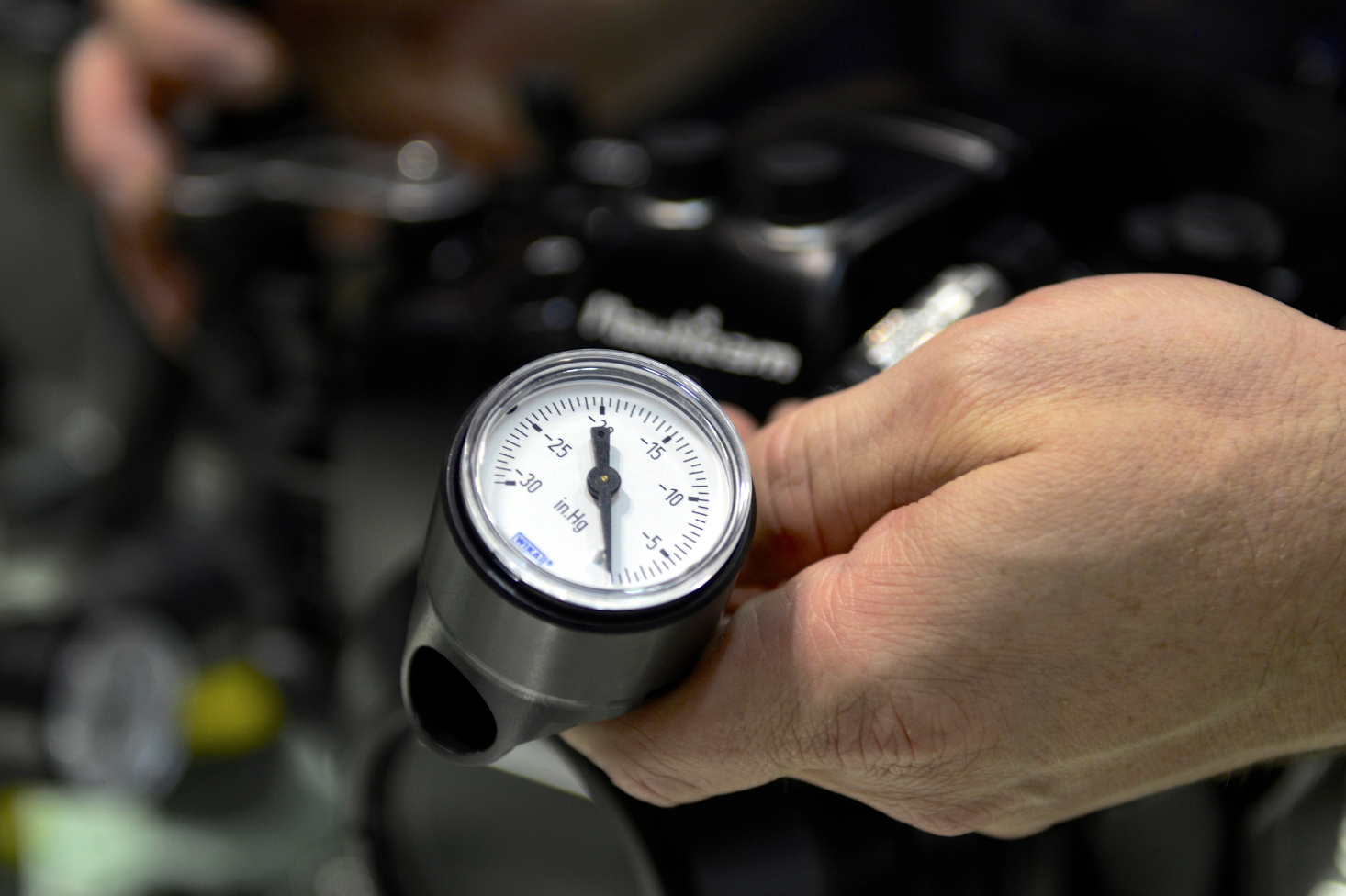 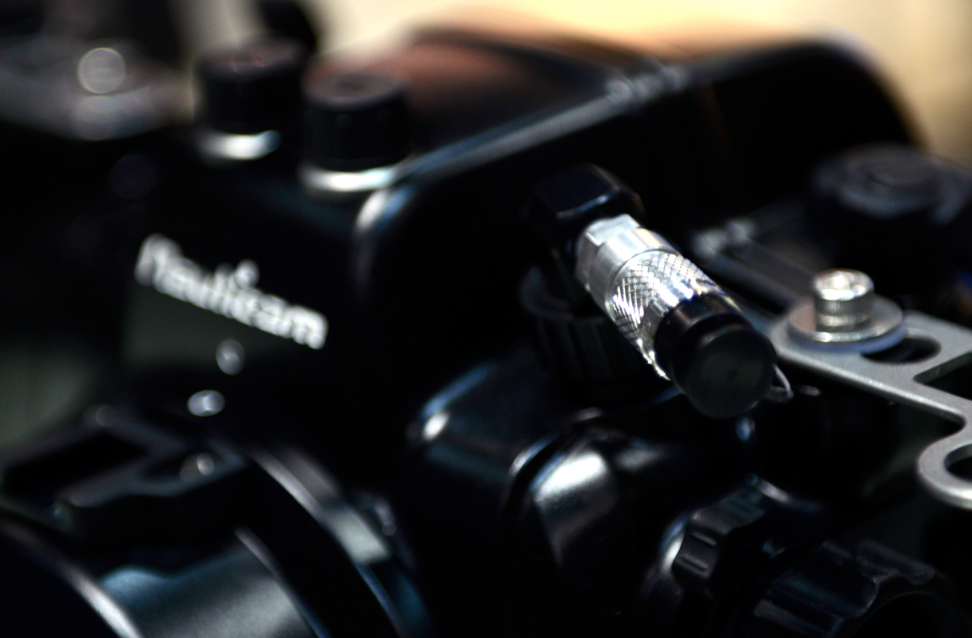 From the Airlock, we flipped over to Backscatter’s “Flip 3.1” system for GoPros. These must-have accessories for the GoPro are designed specifically with the underwater photographer in mind.

The 3.1 is the upgrade to Backscatter’s popular filter system for the GoPro, featuring the ability to flip between multiple filters at once with the addition of the Top Flip. Not all blue water filters are the same. That’s why there are actually three different blue water filters for the Flip 3.1: Shallow (5-20 ft), Dive (20-50 ft.) and Deep (50+ ft.).

In addition, there are specialty filters for filming in green water, experimenting with the NightSea’s fluorescence and a macro-close up lens. 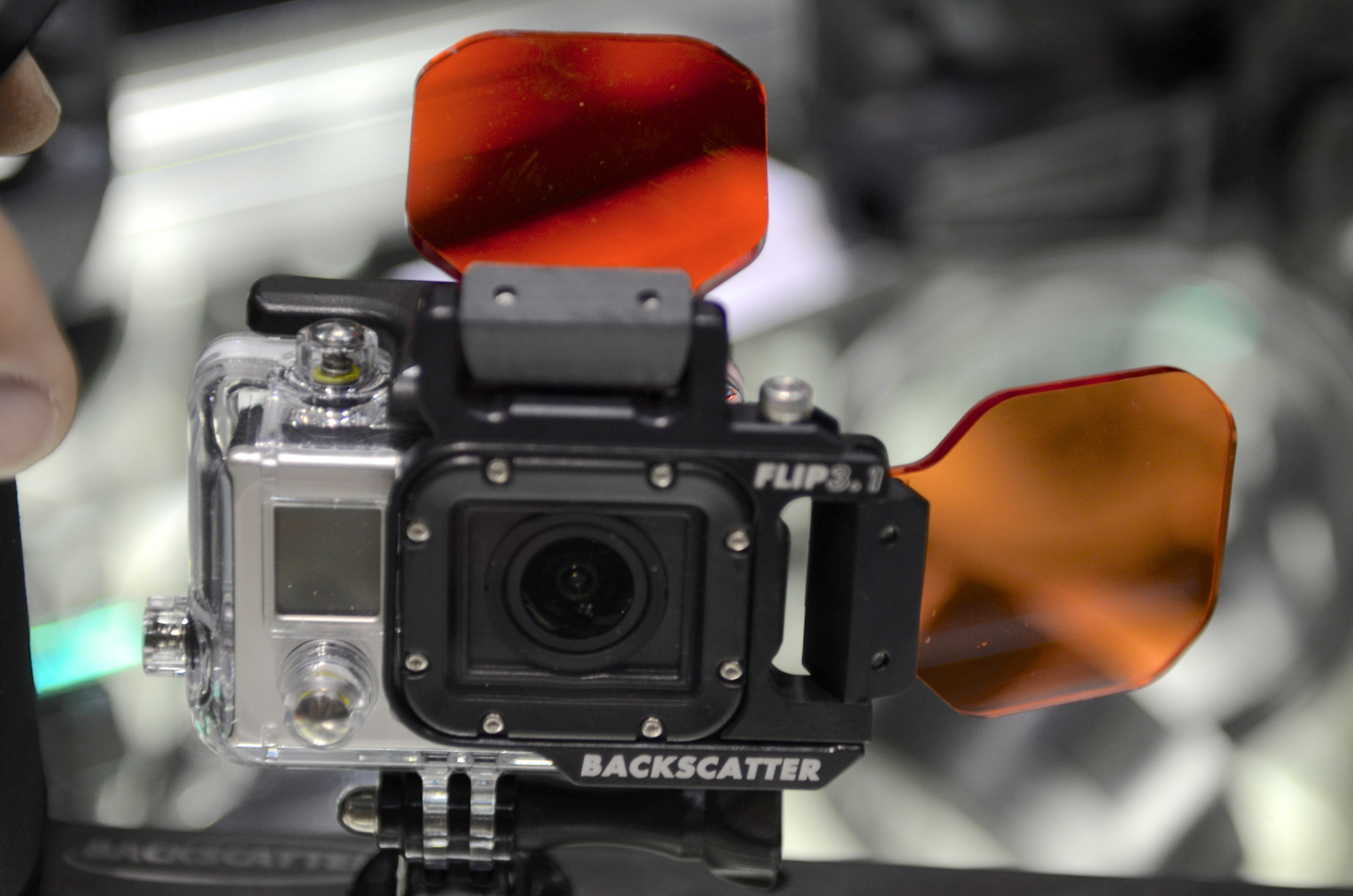 Perhaps the one GoPro accessory that goes overlooked (not by us!) is the handle and tray set, which helps to stabilize the footage. Backscatter had on display both their single handle and double handle. 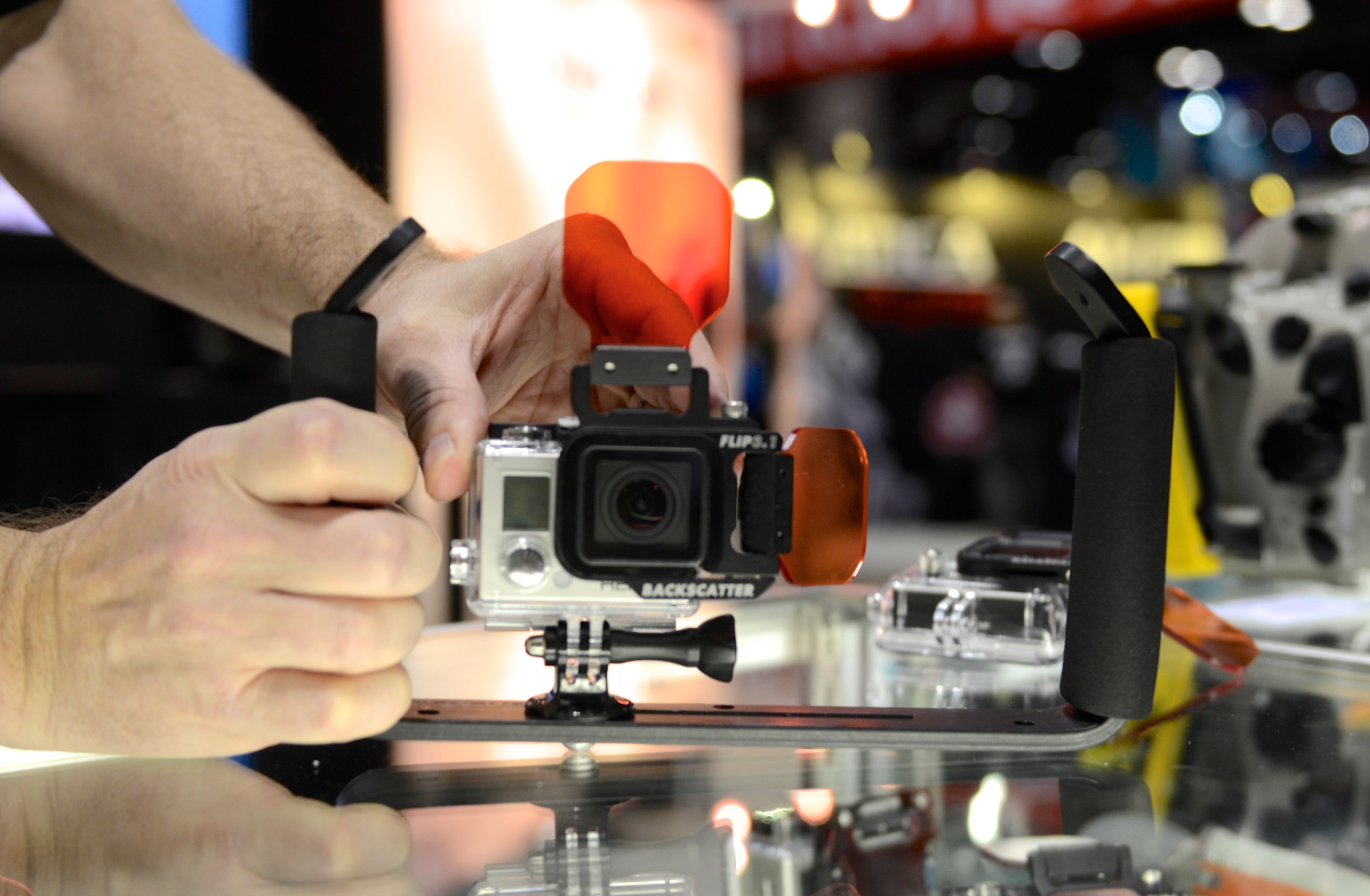 And now for a quick tease: We will be catching a sneak peak at the BRAND NEW Olympus housing for their new flagship mirrorless camera, the OM-D E-M1 at tomorrow’s show. Stay tuned…

It’s been the year of lighting for the folks over at SeaLife—at DEMA they unrolled four new lights/strobes for underwater imaging. The SeaLife Sea Dragon line features two video lights (2000 and 1200 lumens), as well as a new strobe. 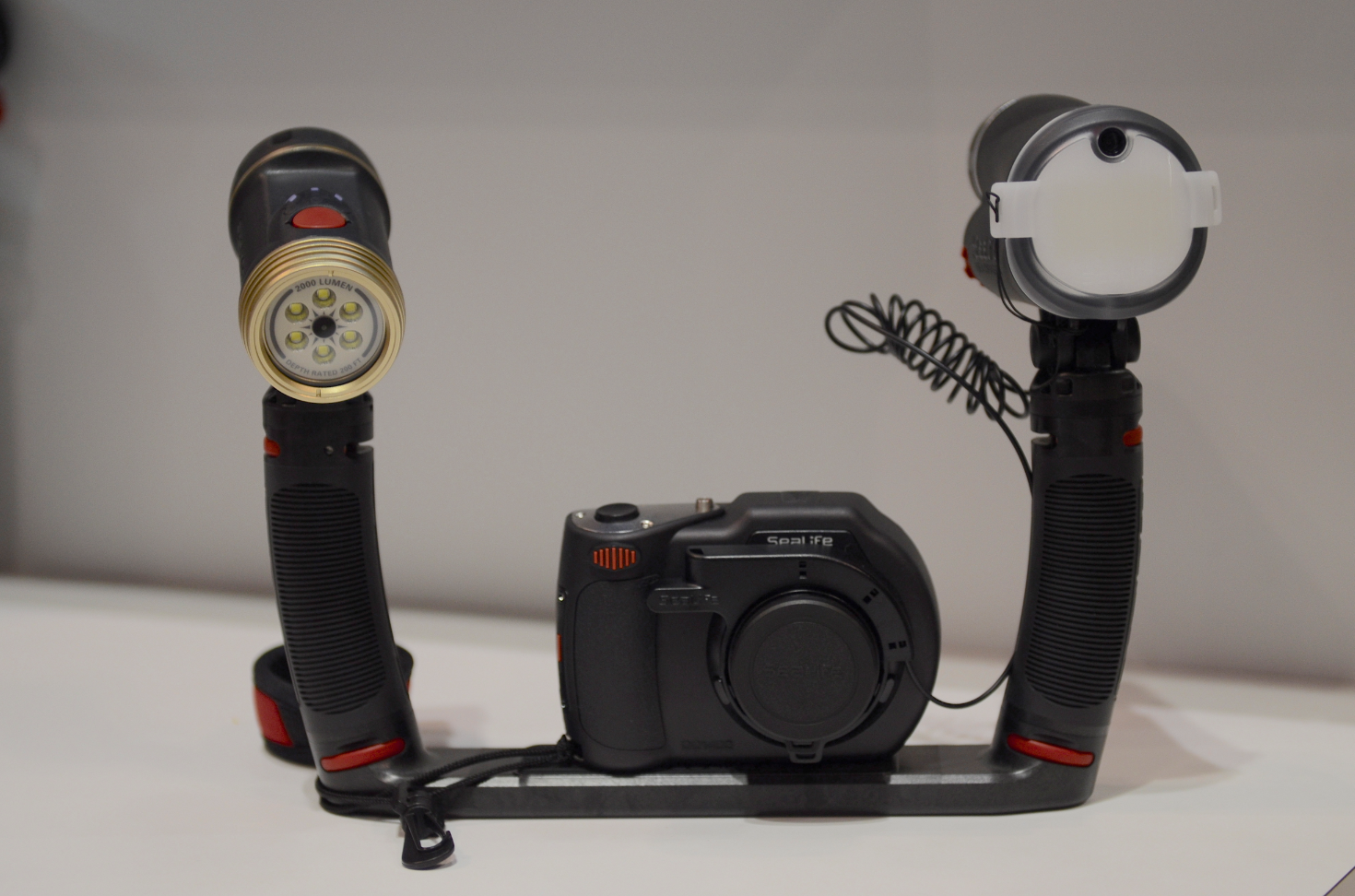 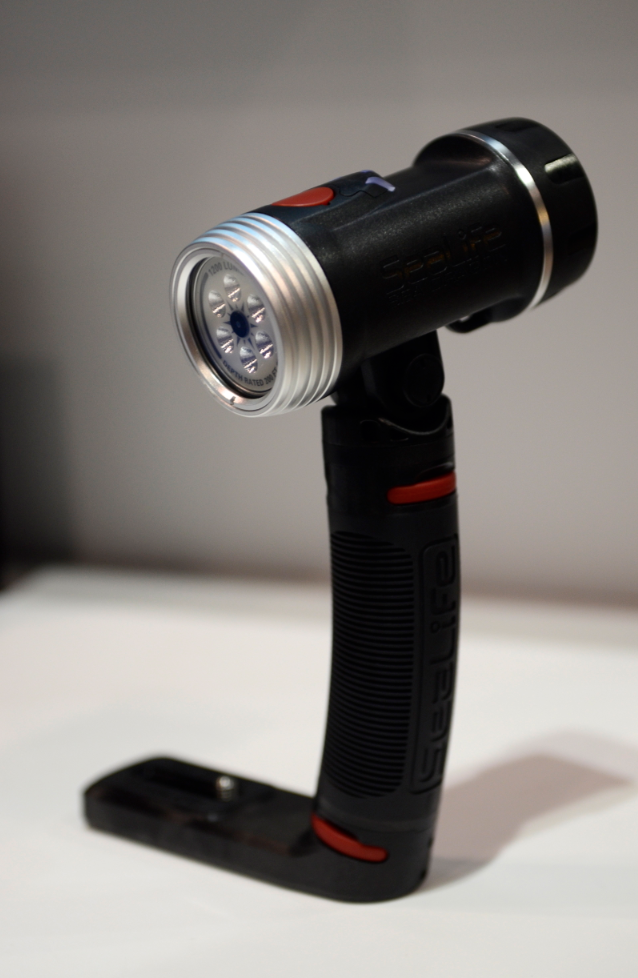 The SeaDragon 1200 and 2000 video lights feature a 100-degree beam, battery indicator and burn times of 75 and 60 minutes, respectively.

SeaLife also showed us their hand-held mini 600 torch, with variable power that can be attached either in a cold shoe as a focus light or on a GoPro. 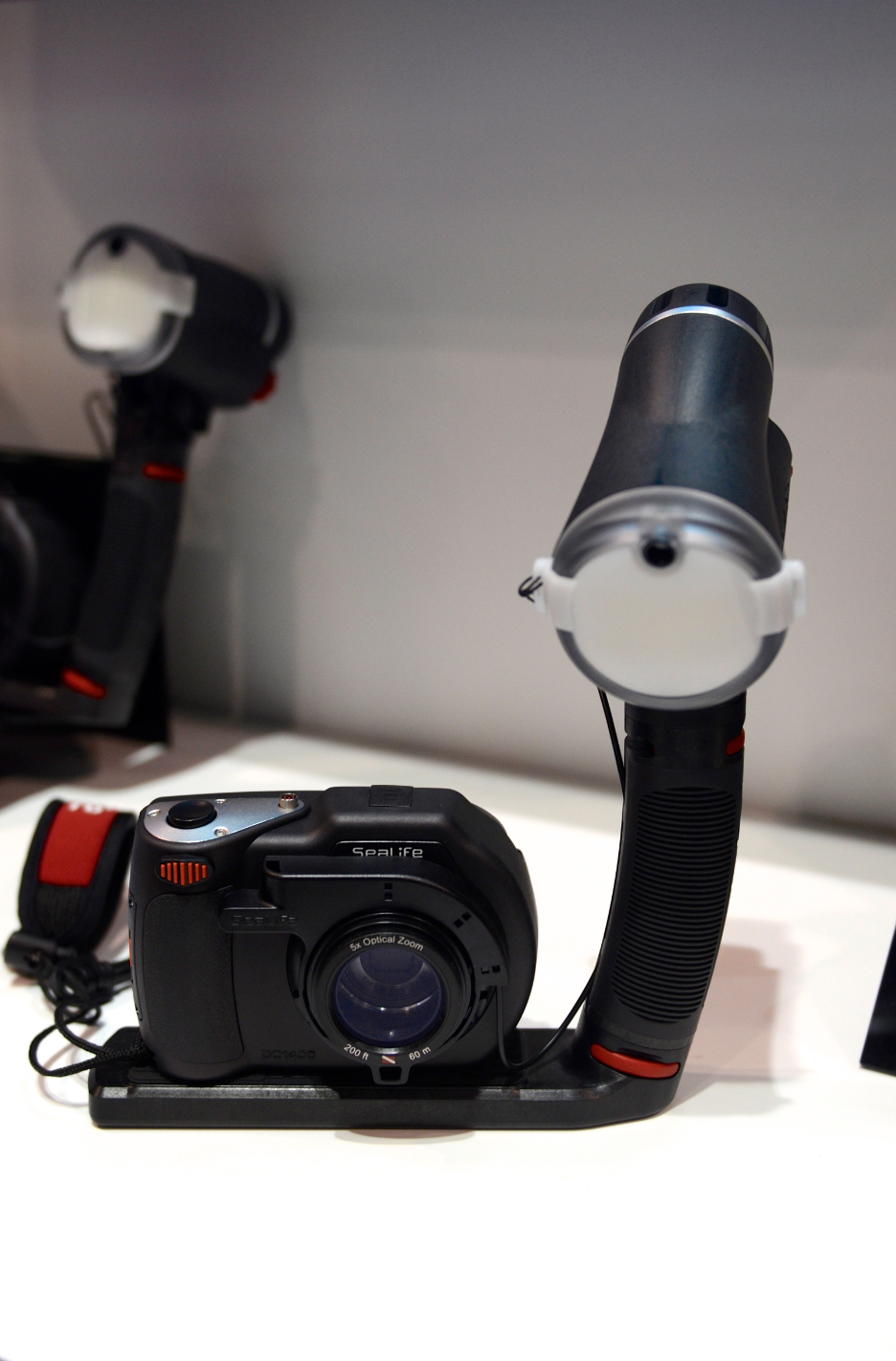 Almost as significant as the lights themselves is SeaLife’s new, modular arm system. It takes less than a second to connect/disconnect the arms from the tray—and you can combine any arm with any light, strobe or tray.

BS Kinetics
There are the common sightings at DEMA—but an underwater housing for Leica’s flagship SLR isn’t one of them. That’s why we were so enamored with BS Kinetic’s housing for the Leica S. It’s truly a one of a kind housing for the 37–megapixel medium format system. 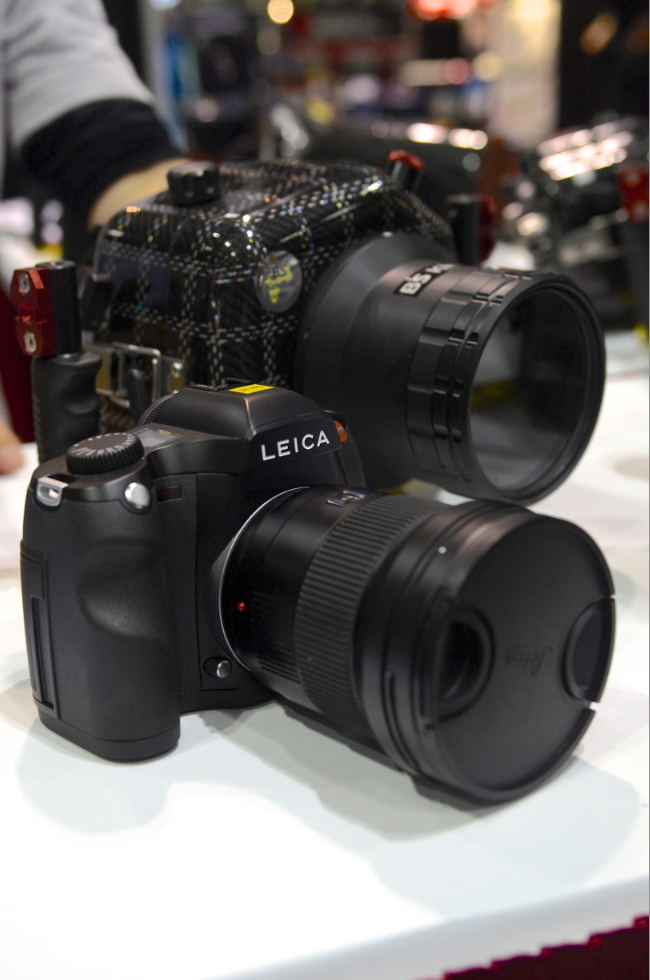 For non-Leica users, BS also introduced a new modular port system that adapts their ports (macro and wide-angle) for any of their housing bayonetted, from mirrorless EVIL cameras to big SLRs and even the Leica S. Also expect a brand new BS Kinetics website in the very near future. 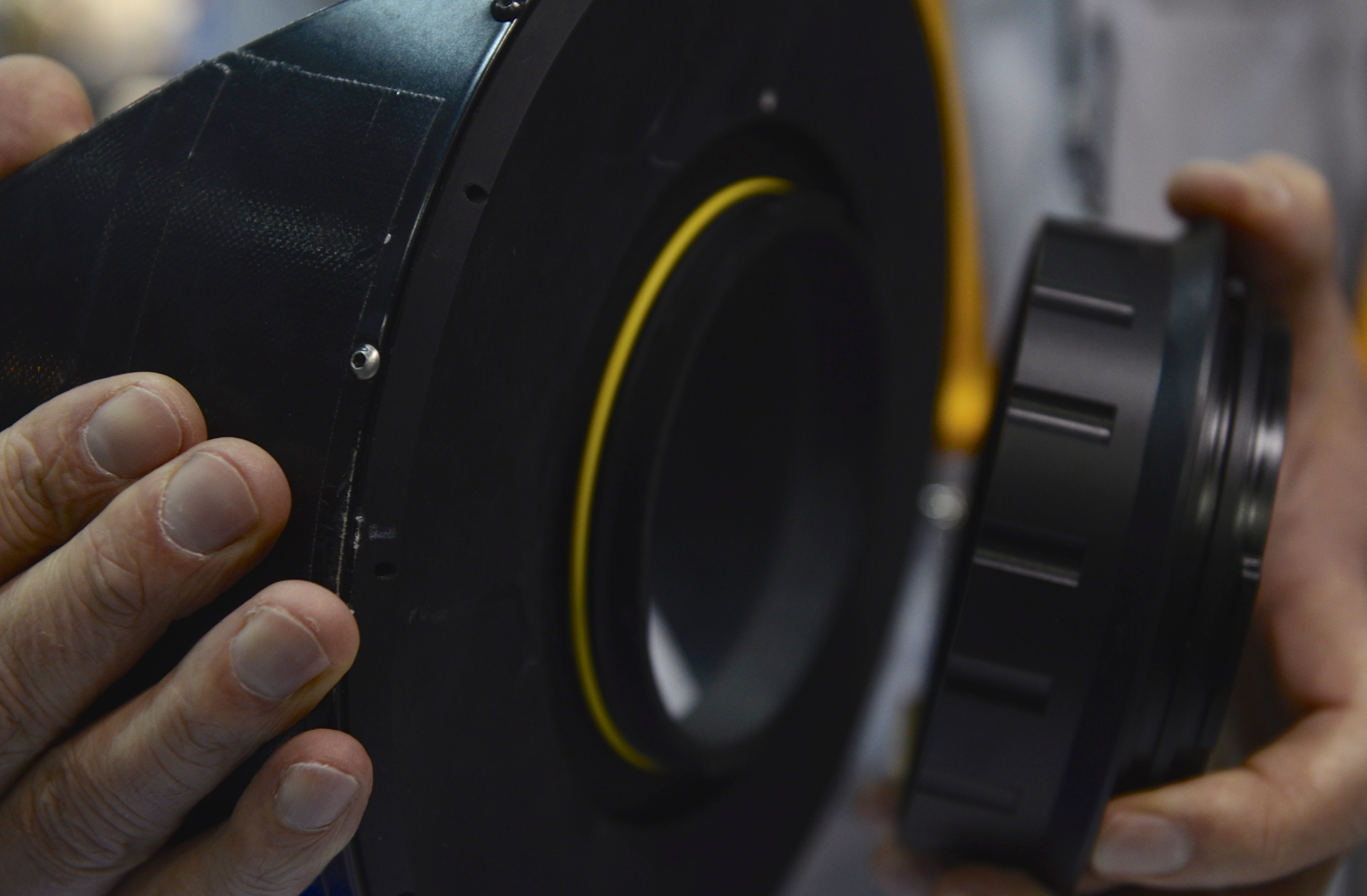 ReefNet
For macro fanatics, the ReefNet booth is a must stop: All the fiber optic snoots and SubSees your heart could desire. 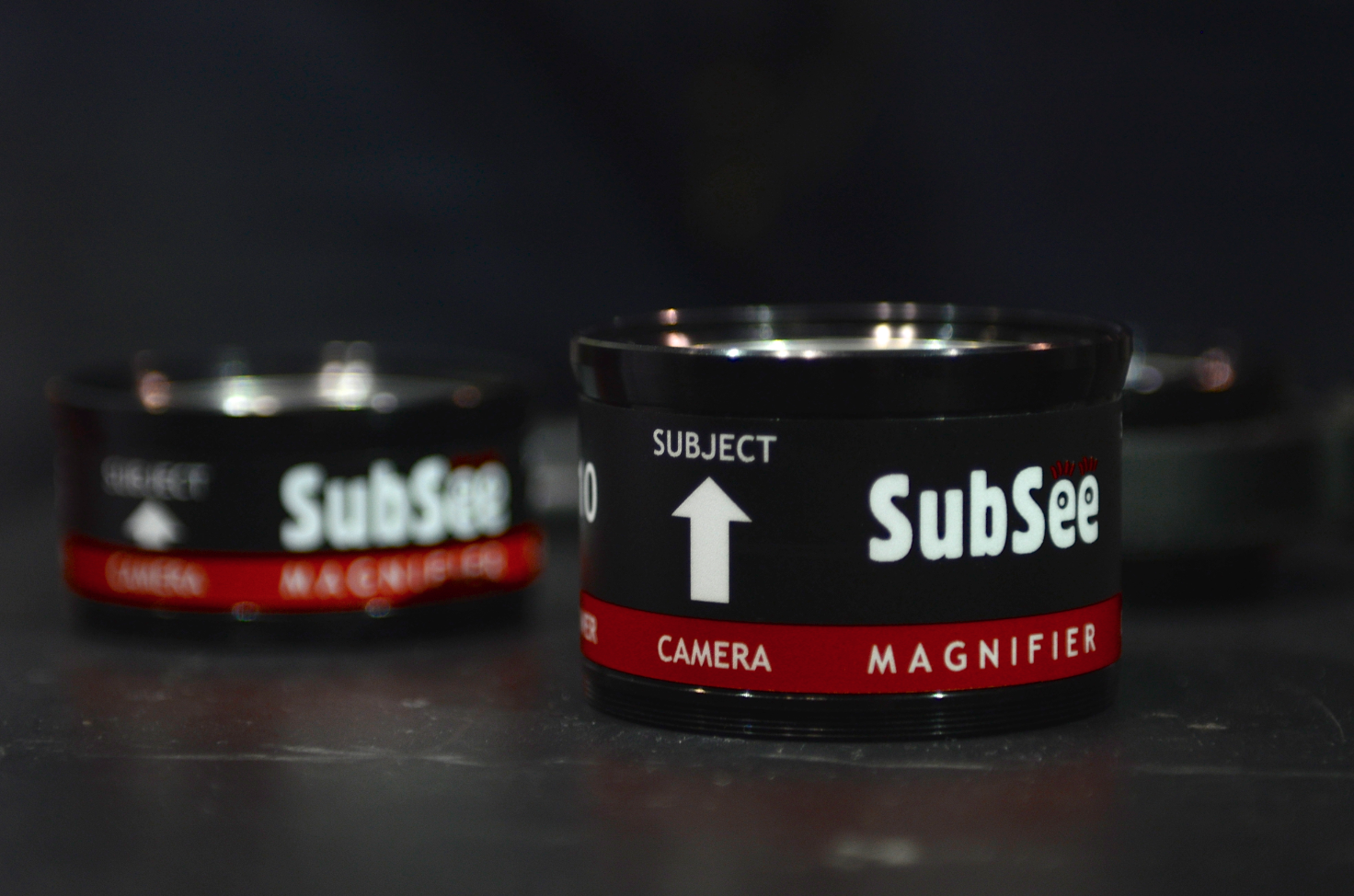 You can combine two 5+ adaptors for more magnification, or add accessory filters to your 10+ diopter. Or you can just make googley eyes with them… 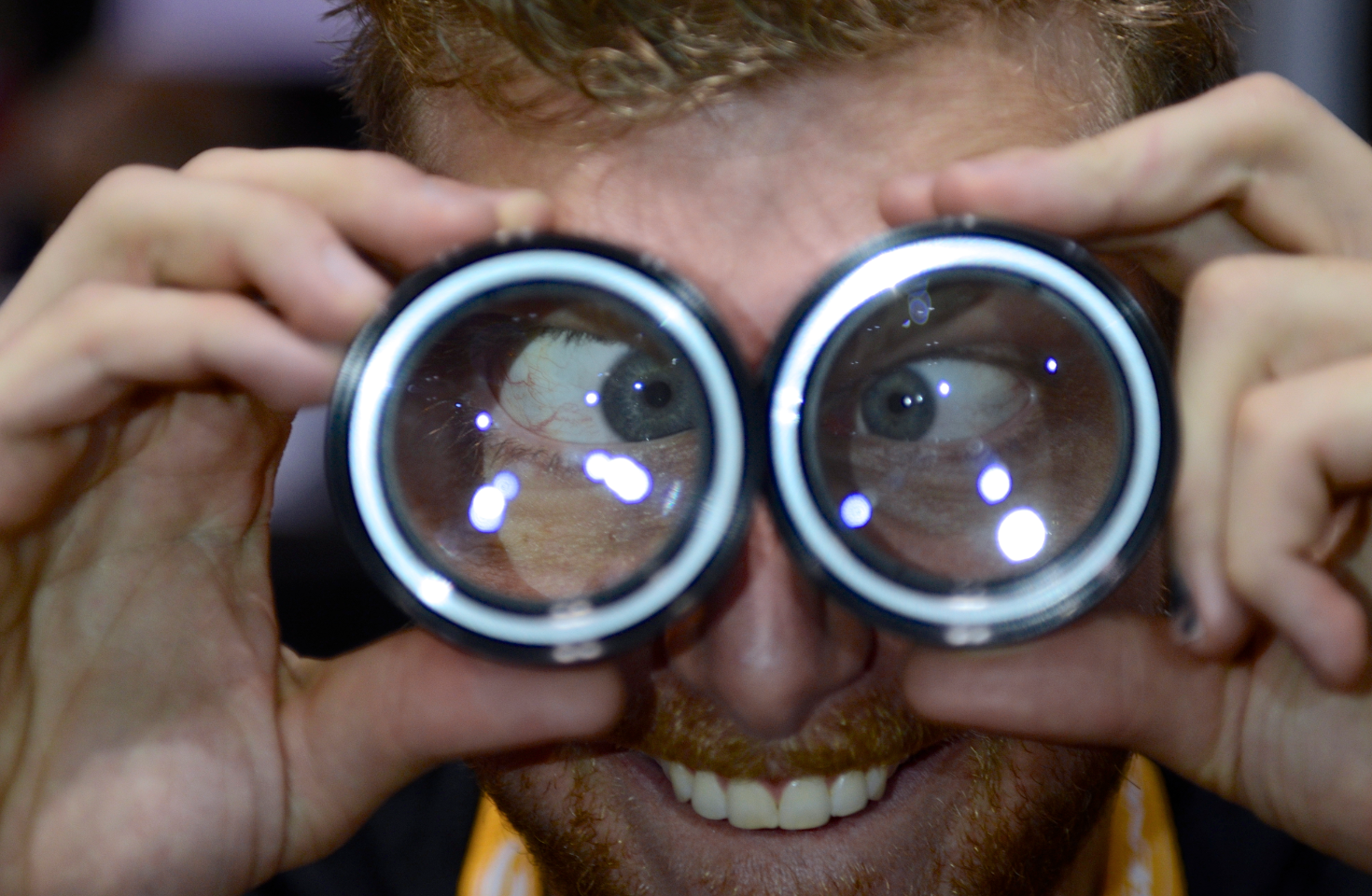 Well that’s all the coverage from an exciting first day of DEMA. Make sure to stay tuned for much more coverage from the show floor and the monumental DPG/Wetpixel Underwater Imaging Cocktail Party, tomorrow. Your personal invite, here.

Until then….
Matt, Joe, Lia and Team DPG