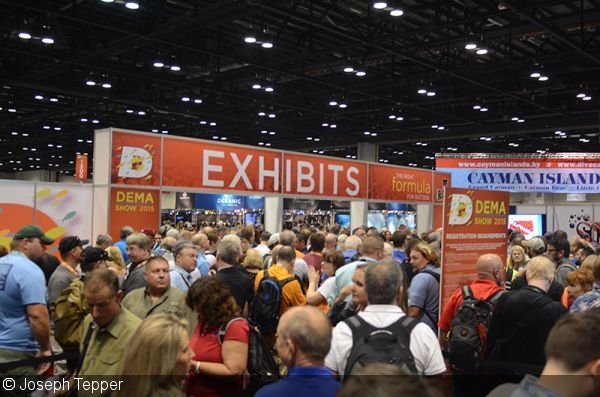 The sense of excitement at DEMA 2015 was palpable as a throng of 200 divers stuffed in behind a thin red ribbon. But with the swoosh of scissors, the ribbon was cut and the crowd plunged into the show floor.

Luckily, DPG editors were already getting the inside scoop on innovative underwater photo gear. Day 1’s highlights include a look at what’s new, what’s hot, and what you need to know from the likes of i-DiveSite, Fantasea, SeaLife and more… 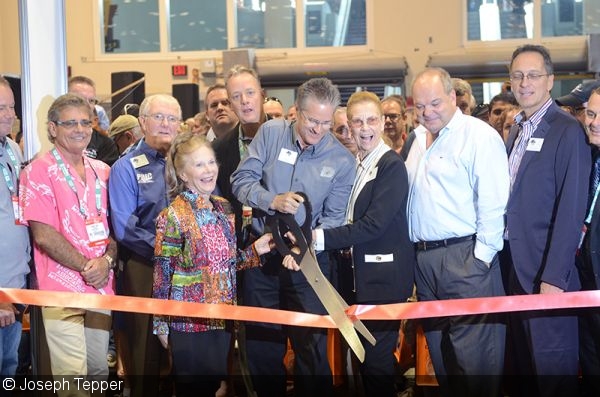 Cutting the ribbon—the DEMA board prepares to cut the ceremonial line separating excited divers from the show floor.

Hard to beat a newer product than one that was announced just this very morning! Sealife unveiled their updated Micro 2.0, self-contained underwater camera. Based on our first look, this new version features much of the same features we found useful in our recent review—piano-style keys and internal storage—while improving key internal specs.

The Micro 2.0 is built around a 16-megapixel Sony image sensor. Similar to its predecessor, the 2.0 has an external USB plug for charging and uploading, but new with this model is the ability to plug directly into a wall outlet. SeaLife is also rolling out new software: the "Microcam" for the SeaLlife Micro HD and 2.0. It offers a cloud-based image service along with remote control over the camera.

In addition, the Micro 2.0 comes with shortcut access to the useful custom modes. For video shooters, there’s also a significant upgrade to 60fps (from 30fps) at 1080p. This allows crisper slow-motion footage when shot at the same resolution. Alternatively, there’s also the new option to shoot at a resolution of 1296p at 30fps. 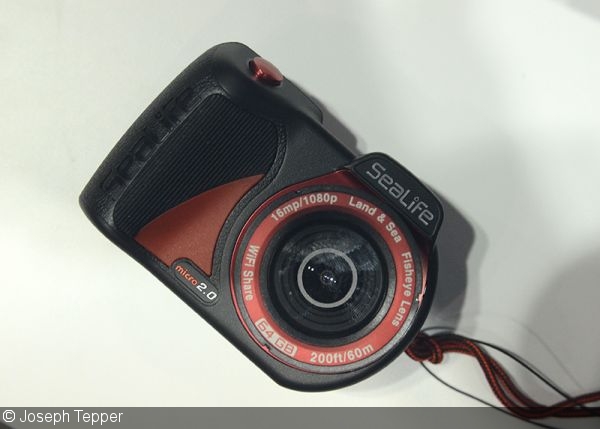 Upgrades to the Micro 2.0 include a 16-megapixel Sony CMOS sensor and improved video specs 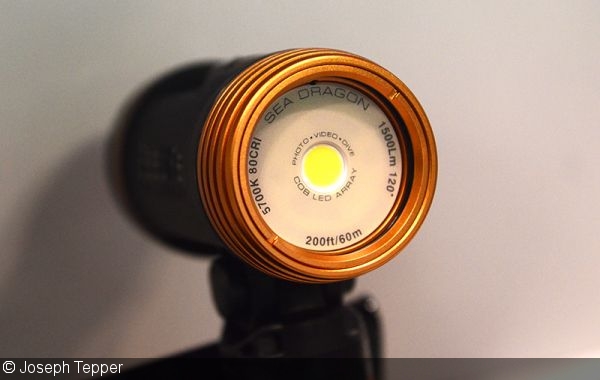 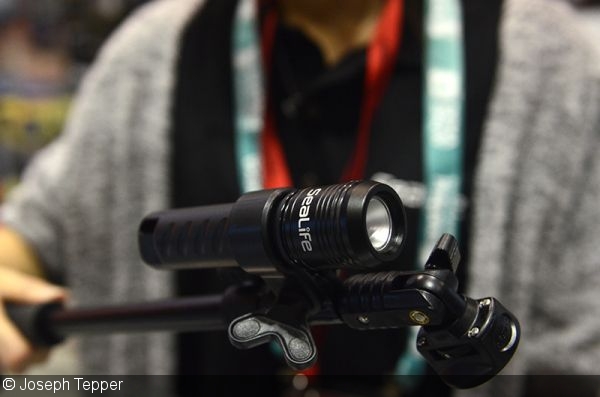 It’s always exciting to see innovation in underwater photography. A year ago, one of our friends at i-DiveSite hinted the company was working on their first strobe. We found out today that not only was it their first strobe: It is also the world’s first strobe merged with video light!

The Symbiosis strobe/video light is a modular system that features both a separate strobe and a separate video light. Coolest of all, the system is powered by a single battery back. Also pretty darn cool is the fact that the system is modular, meaning you can upgrade the lumen output of your video light (the standard is 2,000 lumens) or replace a part that breaks without having to waste the whole system. 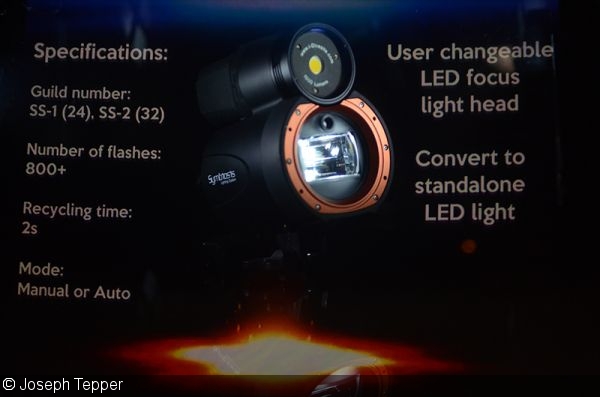 The strobe features a “learn mode” where it adapts to your camera’s flash protocol with just one image. The recycle time is two seconds at full power, with the ability to fire 700 times on a single charge at this same output. There are several modes, including full manual, and auto (wide angle) and auto (macro). The strobe has a built-in light sensor that calculates approximate output needed depending on whether you are photographing a macro or wide-angle subject.

As mentioned above, the power of the video light is completely up to you, thanks to the modular nature of the system. For example, you could choose a 500-lumen LED head, ideal as a modeling or focus light. A more dedicated videographer, however, might prefer to spend more for 4,000 lumens. 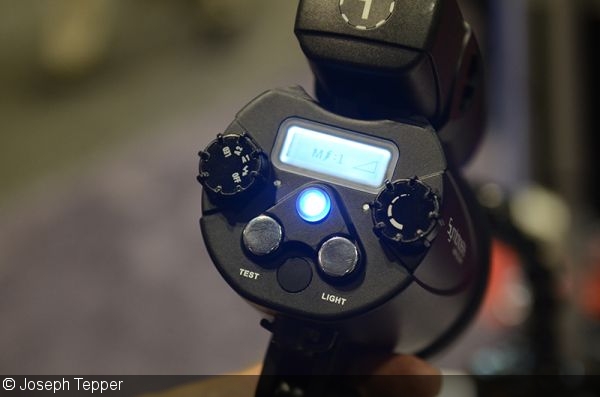 The two-in-one nature of the Symbiosis is a real plus, but the customization through different modules makes it an attractive option to image-makers of all levels

Regardless, the PRO version system features a LCD display with power output and the mode (in strobe) as well as battery life (video light). A less expensive version, without the LCD, will also be available. The system is expected to ship in March with the standard version coming with a price tag of roughly $699.

Other than the big news of the Symbiosis System, i-DiveSite had several other new and upgraded lights. 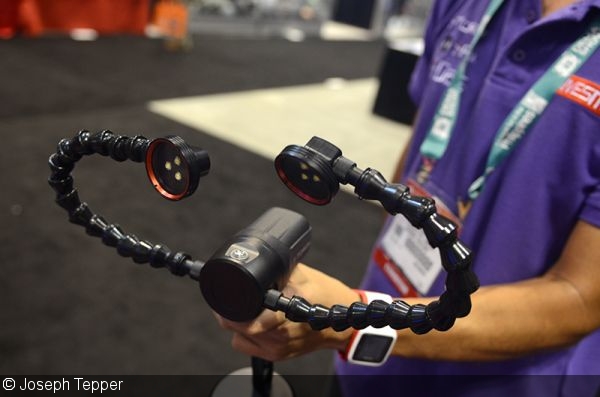 The new action buddy is designed for GoPro and other action cameras. The modular head features two LED heads spread apart by flex arms with a combined output of 3,500 lumens. Expect this light to be available mid-2016 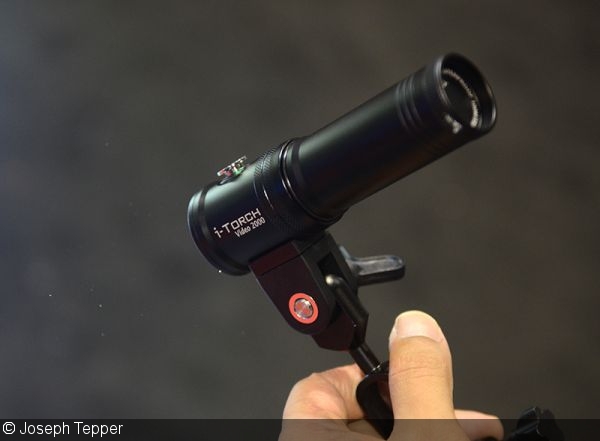 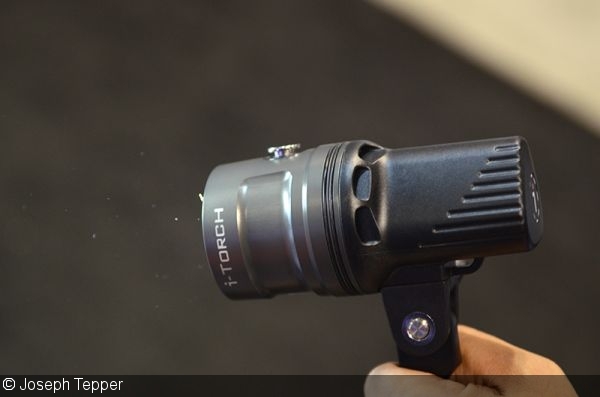 The latest in the popular series, the i-Torch Venom 2.5 features a 2,500-lumen output. But the real note here is the quick charge time of under two hours for a full charge

While we’re on the subject of lighting, the manufacturer Fantasea is moving into the high-end lighting market with the announcement of a new Radiant prototype. The light is modular, travel friendly, and will begin with a 1,500-lumen output (although a 2,500-lumen light is in the works).

There is an emphasis on simplicity and ease-of-use, with just two primary buttons: The first is for on/off and mode, while the second controls intensity. The modes on the basic model include wide beam and narrow beam. However, the company has hinted at a pro model being planned, which will included blue/UV output among other modes. The simpler model (1,500 lumens) will retail for roughly $350, with the “pro” version will retail for $500. Details on availability will be released soon. 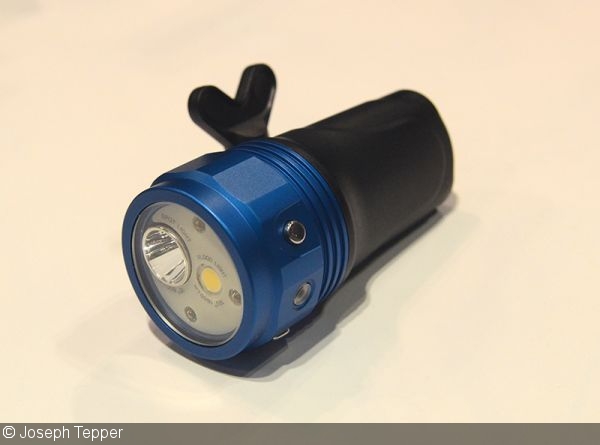 Also on display is Fantasea’s brand-new housing for the Sony RX100 IV. The company has spent a considerable amount of design time to make the housing user-friendly, with labeled buttons and double O-rings, while also keeping it affordable ($500). Expect to see a review of this promising housing to hit DivePhotoGuide within the next week. 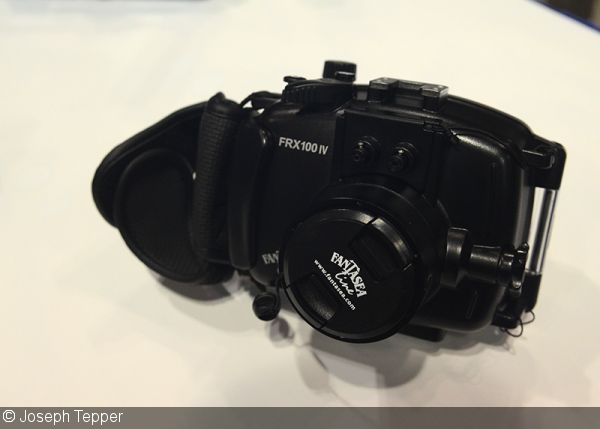 Fantasea’s housing for the RX100 IV provides a quality, yet affordable way to take advantage of the compact camera’s powerful specs, such as 4K video recording

Despite celebrating several anniversaries on the market, the Canon G16 remains a popular choice for underwater photographers, and Fantasea’s corresponding housing makes just an equally appealing option for divers. What can make it a more attractive purchase? How about the combo camera/housing deal Fantasea is now offering for just $699. 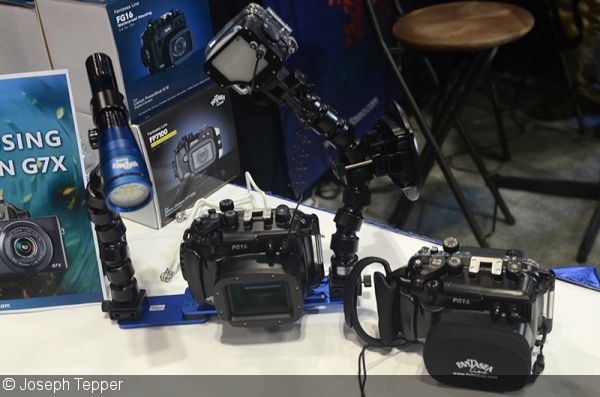 Considering the G16 hit the market with a price tag of nearly $500, Fantasea’s package deal is a great gift for someone looking for their first underwater rig

Last week, Aquatica announced their housing for the Sony a7r II and a7s II, and today we got a hands-on look at the amount of detail and design that went into the final product. Perhaps the most significant ergonomic element is a long lever that brings a small “set” button from the bottom of the camera to within thumb’s reach on the outside of the housing. Combined with the large-grooved rotary dial, you can quickly change anything from ISO to image quality without removing hand from handle. The housing has a retail price of $2,699. 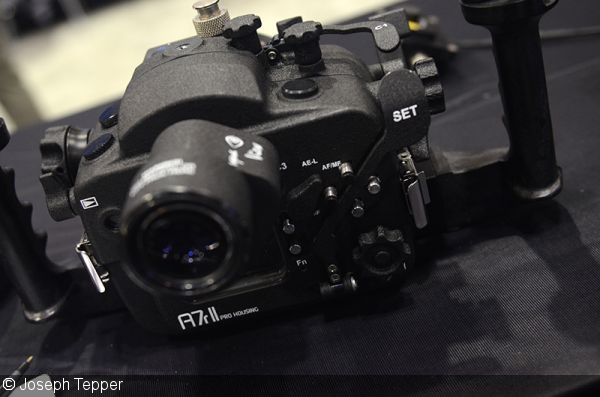 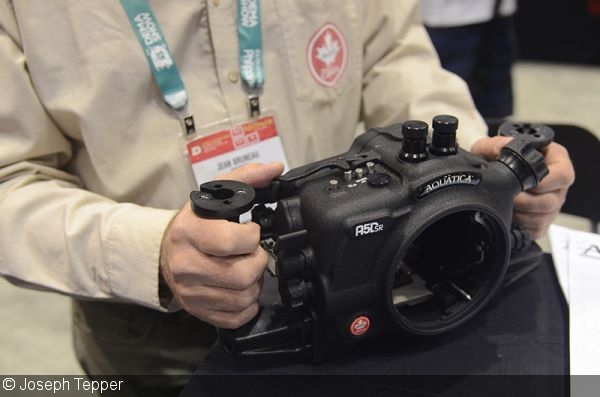 The Aquatica housing for the Canon 5DS and 5DS R features an easy ISO lever, which is changed most often when shooting video

Also on display at DEMA is Aquatica’s revamped macro port. The new port features a slimmer profile, with a 77mm threaded front, complete with bayonet for external diopters and flip filters. There’s also the option to step down to 67mm for direct attachment of filters.

Of significance, we were able to see Ikelite’s TTL circuitry built into Aquatica’s new housings. This allows shooters to alter strobe output and exposure compensation right from the housing, rather than fidgeting with strobes. Beginning in 2016, Aquatica will also offer an attachment with the TTL circuitry to be retrofitted into existing housings. 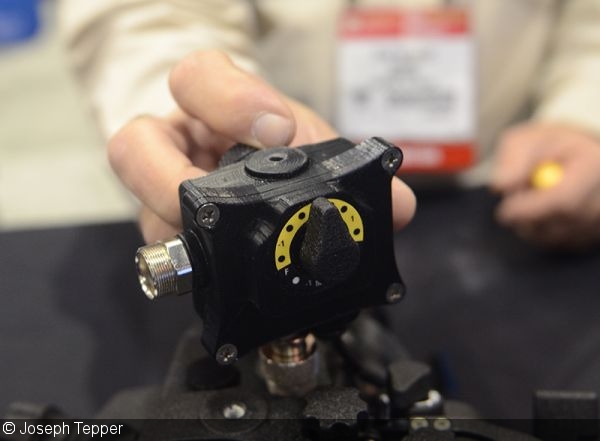 The combination of Ikelite’s TTL circuitry built into Aquatica’s design is a real bonus for those purchasing new housings. However, Aquatica will also be selling external TTL converters for older housings

After taking a look at the housing for the 5DS and 5DS R at Aquatica’s booth, it was only fitting to see the cameras at Canon’s booth. 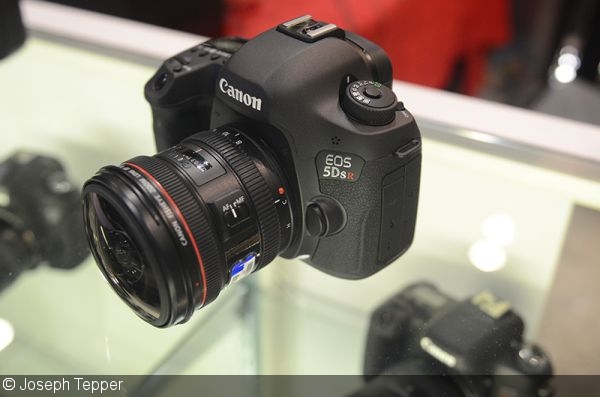 Ok, so this last one is probably not the most important underwater imaging gear on the show floor, but it’s darned cool. A couple weeks ago, Canon unveiled a prototype camera with the ability to shoot upwards of ISO 4,000,000. And no, I didn’t miscount the zeros. At the Canon booth, we saw this incredible light sensitivity on display, as it photographed a stream of underwater bubbles in a black box. It sure didn’t look black… 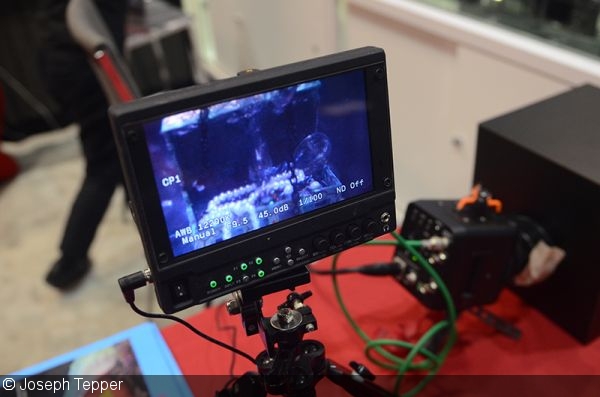 The response from the reps at the Canon booth when I asked how high the ISO was set to: “Not that high, just 120,000”

Well, it was a great first day. And there’s lots more to report on, but it’s almost time to kick off the infamous DivePhotoGuide/Wetpixel Underwater Imaging Party. Hope to see you there! 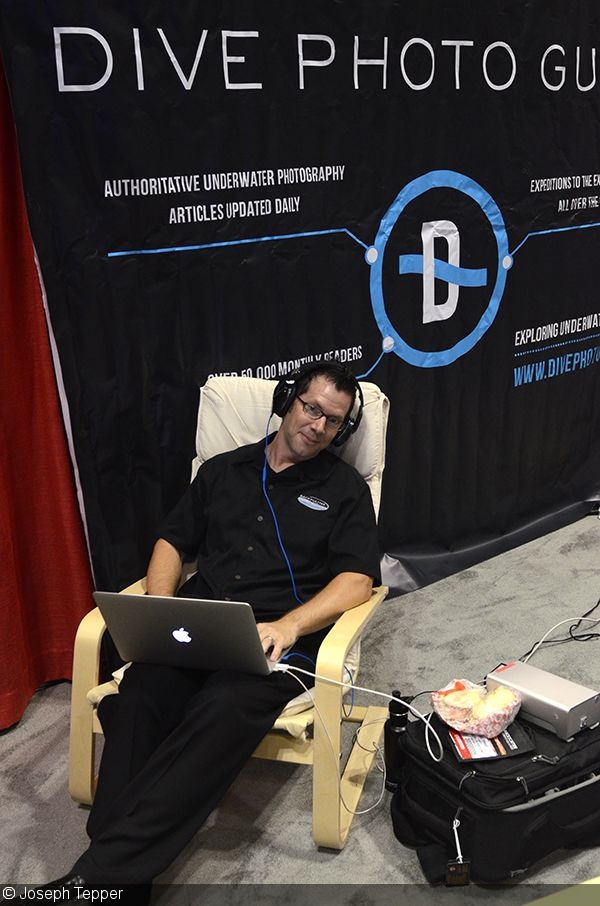 Joel Penner chills in the popular DPG lounge prepping for a killer presentation on using your GoPro underwater. If you can’t make it to the show tomorrow, a lot of his awesome tips can be found here