DEMA Coverage- Day 2
By Joseph Tepper, November 4, 2011 @ 08:00 PM (EST)
DPG’s coverage of DEMA 2011 continued today with aisles of exciting photo and video equipment, as well as the informative seminars provided by the Imaging Resource Center.
So, let’s get back in!
Gates
With not too many new products to display at their booth, Gates dressed up some of their larger professional housings with the illuminous VL-24 video lights. 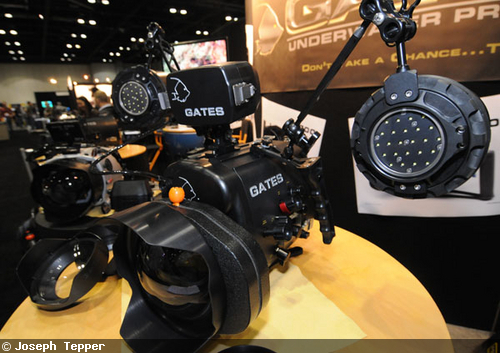 Keldan
Keldan rolled out their Luna 4V, a 4000-lumen video light that features five power levels and an 85-degree beam angle. The power is adjustable from 11-14 watt and has a burn time from 45 min at the highest setting to 180 on the lowest.
“The big advantage of this light is you can flip the batteries on the go,” said Keldan’s Daniel Keller about the 4 V, which retails for $1490 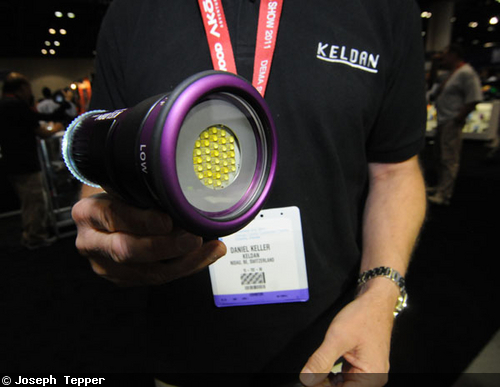 They also introduced a 50-degree beam reflector designed for creative video lighting and creating contrast with shadows, available for $425. Keller also gave us a preview of the improved specs on Keldan’s CRI Pro (color rendering index) and Flux lights, which have been upgraded tp 4500 and 6000 lumens, respectively. 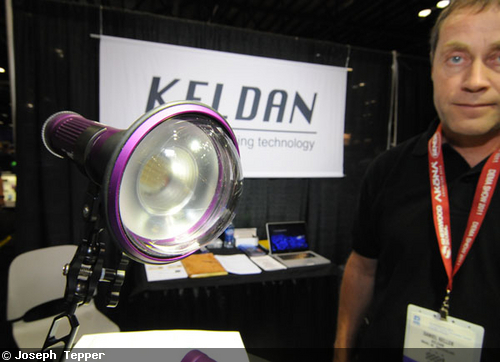 Customers with older versions of the lights can also upgrade to the higher intensity specs for “a few hundred dollars,” says Keller.
Nauticam
Out booth neighbors, Nauticam had plenty of brand new products to show off and we were all too happy to hop across the aisle and have a look.
Nauticam’s Chris Parson gave us a personal tour of the company’s new D7000v video housing. In addition to some slight ergonomic changes –moving video buttons closer to the edge for increased performance- Nauticam made some more room inside the housing to allow for the connection of an HDMI cable. 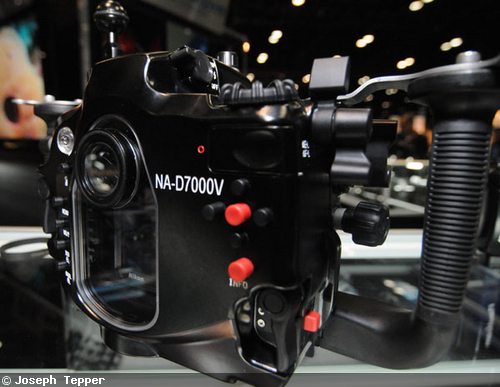 Nauticam hopes the extra room in the housing will encourage customers to connect the companies housed monitor to the camera. Nauticam housings for the T3i, 7D, 60D, and GH2 already have enough room for the HDMI cable. Additionally, Nauticam customized a removable mini HDMI bulkhead, to make switching in and out the cable easier for the average consumer.
The upgraded housing also features the beginning of a new Nauticam trend in slr housings—aluminum plates connecting the tray’s handles to the housing for increased stability. 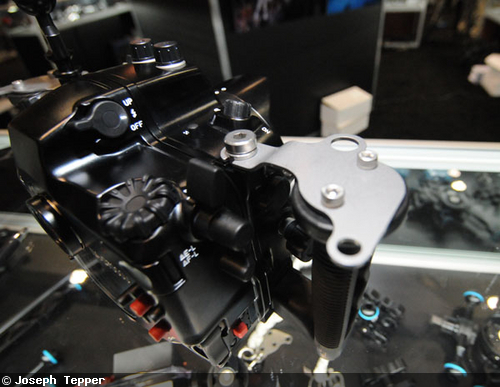 In the continued trend of monitor madness at DEMA 2011, Nauticam also introduced their housing for the Small HD video monitor. The housing, which features Nauticam’s patented rotator latch and leak alarm, features a click wheel and two select buttons to give the photographer full control over the monitor’s features. Another useful detail is the fact that the monitor actually takes Canon 7D camera batteries. 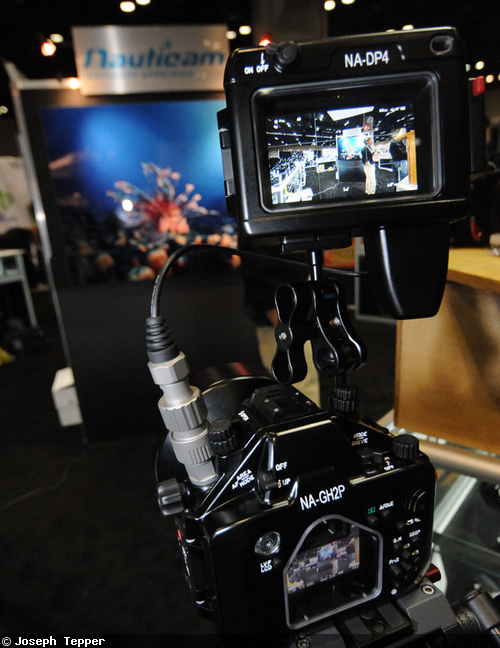 Fantasea
Fantasea had on display their FP 7100 housing for the recently released Nikon P7100. The P7100 includes a pull-out screen similar to the G12 and an extra control wheel to give the discerning photographer complete manual control. 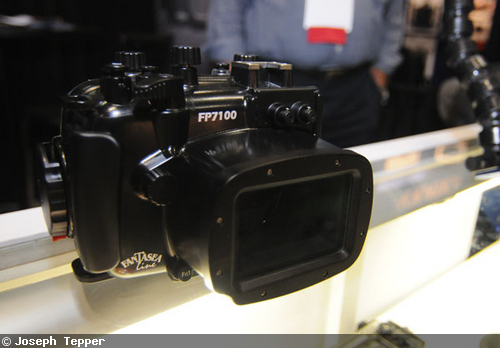 In many ways, the Fantasea FP7100 housing is similar to its predecessor. Noticable improvements include a soft rubber hood and optional handstrap. Fantasea’s Howard Rosenstein also announced a special price for the older model, P7000 camera and housing, for just $650.
Fantasea also rolled out a flappable red filter that fits both onto the company’s standard port and wide-angle external adaptor. 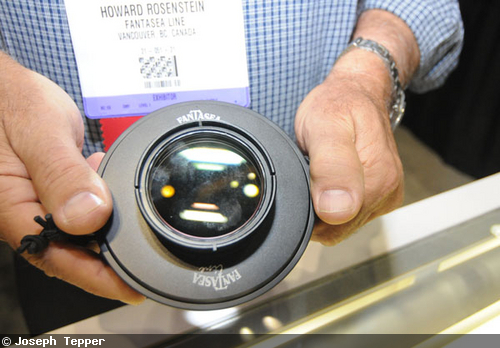 Seacam
Seacam previewed their new Seaflash 100 strobe at their booth. Smaller than the 150, but similar in quality of light (guide number 13), this 1 kg with battery strobe is neutrally buoyant and is perfectly compatable with Seacam's expanding Prelude line of housings. They expect the strobes to start shipping towards the end of January and to retail for around $1000. 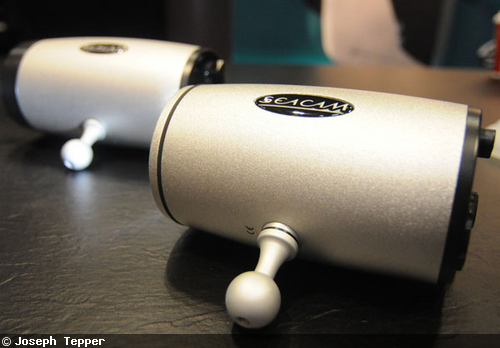 Seacam also introduced an updated version of their D7000 prelude housing, which includes added white balance and ISO buttons at the same cost. The lack of ISO button was a major complaint of the first generation  Prelude housings. 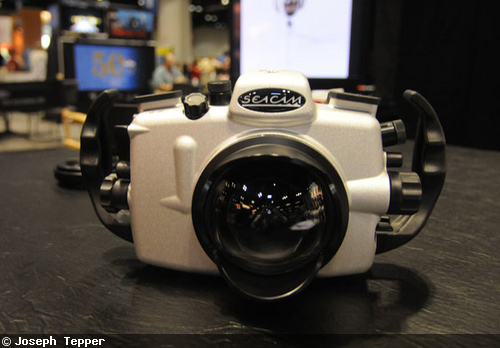 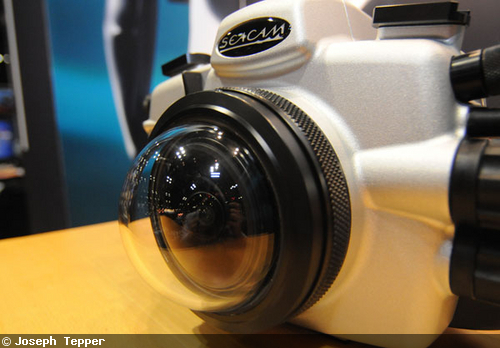 Seacam’s mini dome port for Canon’s 8-15mm fisheye, full frame lens (above).
Acquapazza
As one of the new kids on the underwater photography block, Acquapazza had a lot of new products to showcase at the exhibition this year. One of their many colorful housings, the NEX-5, features a controllable angled viewfinder between 0 and 45 degrees. Another neat feature of the NEX housing is the magnetic focus ring, which operates seamlessly. 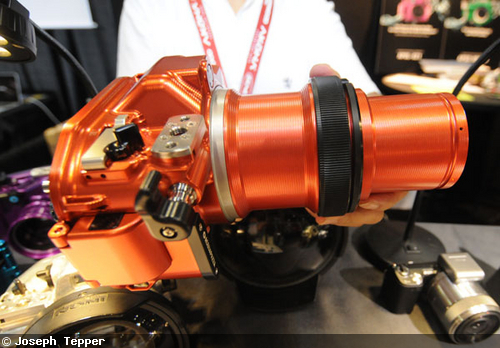 They also had on display a prototype housing for the NEX-5n, which includes a new bayonette mount, rare in medium-format camera housings. The housing will be available at the end of the month for around $2000, and owners of the NEX-5 housing can purchase a bayonette adapter to convert the old thread mount to fit the company’s new ports. Welcome to DEMA Acquapazza! 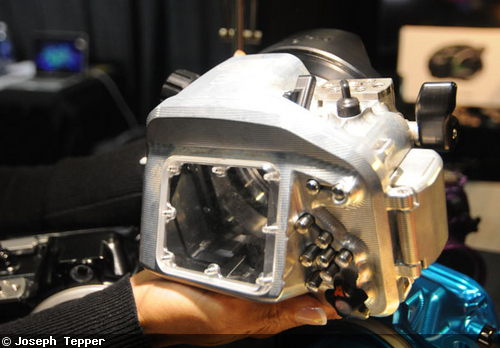 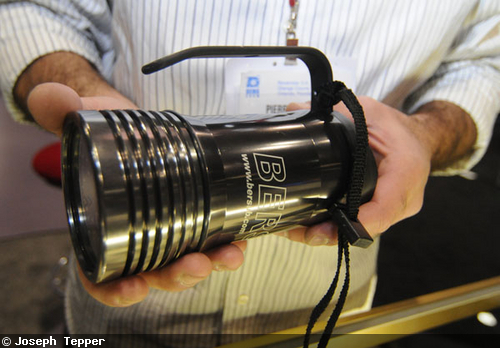 Beneath The Surface
We first met the guys at Beneath the Surface at Beneath the Sea (lots of name confusion off the bat) last year. We learned about their  trays, which provide stability for compact and DSLR housings that can be attached to a BCD for easy entry and exit from the water.
Beneath the Surface’s big product releases at DEMA is their patented pivot tray, which allows photographers two interchange between vertical and horizontal formats without having to rposition the strobes. 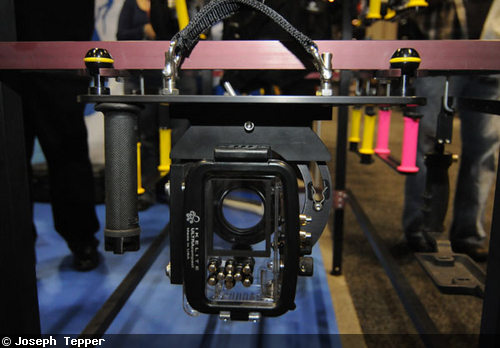 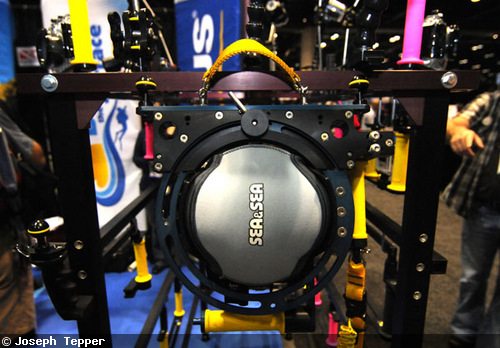