Editor’s Note: This is the first of four parts of DPG’s DEMA coverage. Check out our DEMA 2018 Home Page for a comprehensive look at this year’s show. 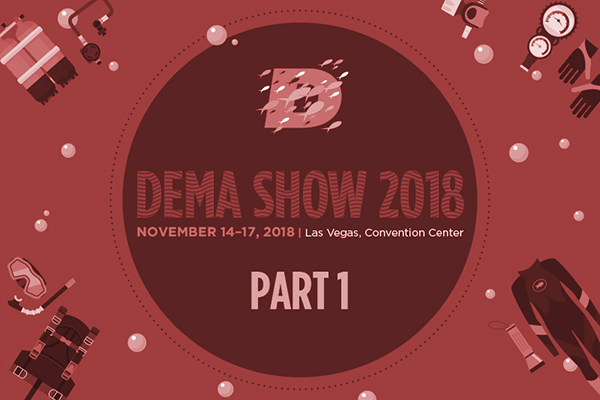 DEMA comes and goes quickly. One minute it feels like the floodgates open to the masses of passionate dive industry members. The next, the lights are being shut off on another year of diving’s biggest event. As usual, in the midst of these bookmarked moments, DPG spent much of the show going booth to booth to catalogue the latest gear and market trends.

Here’s what you need to know for Ikelite, Saga, i-Divesite and Sea&Sea.

With a relatively slow year regarding camera releases, most new housings at the show centered around the Canon EOS R and Nikon Z7/Z6, both of which are the respective company’s first full-frame mirrorless cameras. This was the case for Ikelite, which was one of the first manufacturers to bring housings for these models to market.

Ikelite’s housing for the Z7/Z6 features the company’s signature Dry Lock port system and an M16 plug to attach an external monitor. The tray and camera mount have been machined to accommodate the adaptor needed to use a wider array of lenses, such as the popular 8–15mm fisheye zoom for wide-angle underwater photography. 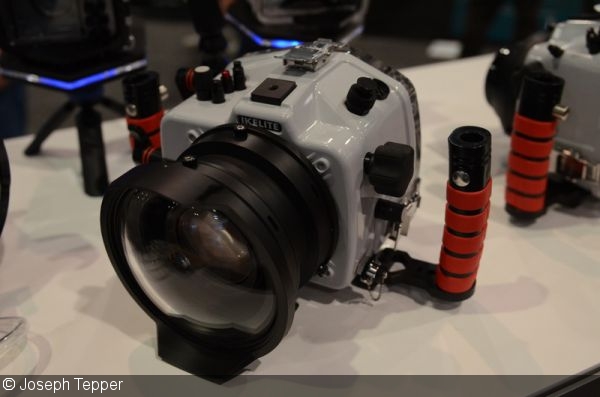 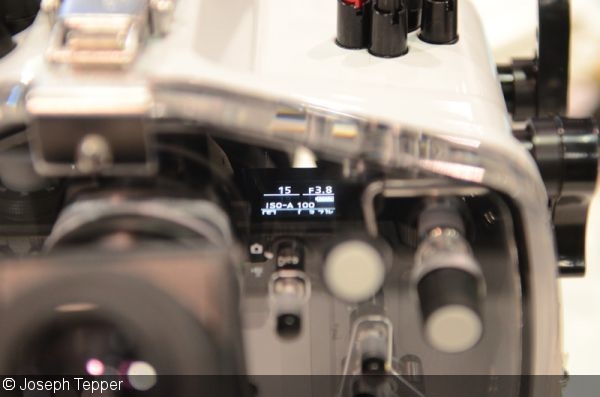 Ikelite’s signature clear back not only makes it easier to see all of the controls in use, but it also allows the user a view of the top display

Because the camera has been seated towards the back of the housing (more so than normal) the already large electronic viewfinder becomes an even more impressive screen for image review or shooting video. You can also see the camera’s top display through the clear back of the housing—quite the boon when you want a quick glance or to change settings on the fly.

Ikelite also had on display their housing for the Canon EOS R. This too was designed specifically to accommodate the EF-EOS R lens adaptor and provides much of the same benefits seen in the Nikon Z7/Z6 housing. The Nikon Z7/Z6 and Canon EOS R housings are both priced at $1,695. 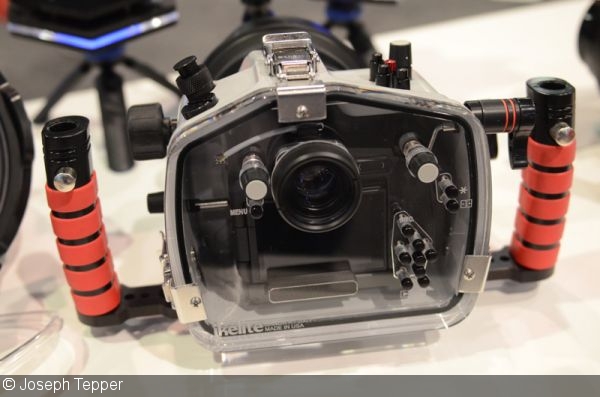 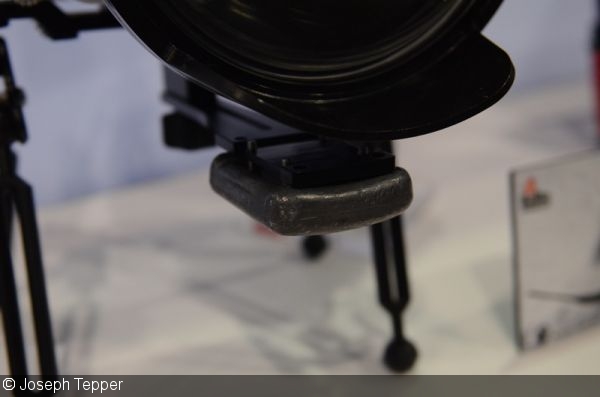 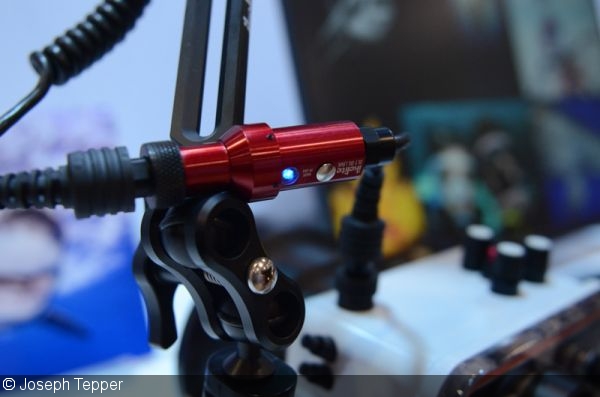 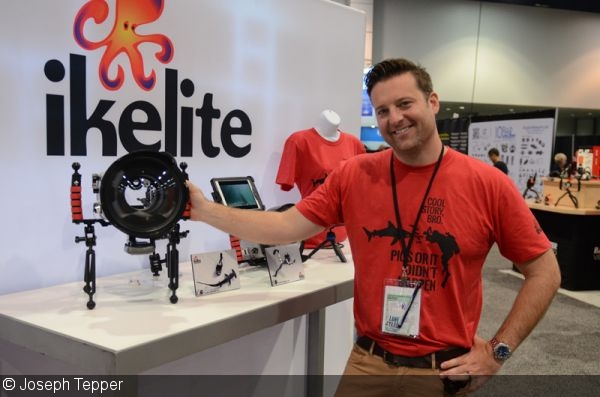 “Pics or it didn’t happen.” So it seems DEMA did happen!

Known for some of the coolest accessories on the market, Saga didn’t disappoint. While the big, beautiful housings are certainly a draw to the show floor, it’s the little stuff that is sometimes the most exciting to see.

Saga has unveiled a quick-release version of their viewfinder. The system—which accommodates both their 45-degree and 180-degree viewfinders—can be customized to fit virtually any housing and makes switching between viewfinders a snap. As well, you can still get the non-quick-release mount for Saga’s viewfinders. 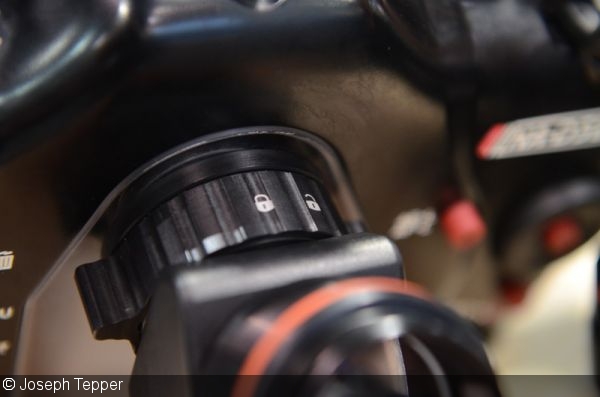 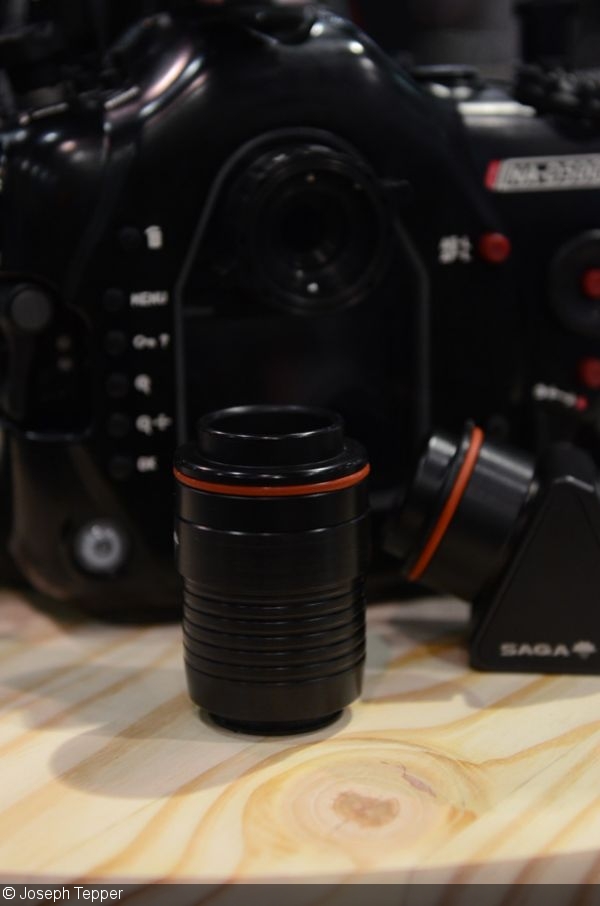 Users can easily switch between an angled viewfinder and a 180-degree, straight viewfinder (pictured above)

The fiber-optic ring flash is one of Saga’s most prevalent products. The new version is designed to make the process of removing/attaching the accessory as easy as possible—a common theme in Saga’s product releases this year. It simply snaps right onto a standard 67mm sized diopter (Saga or Nauticam brands).

We were also blown away by the simplicity and creative avenues afforded by Saga’s new Magic Tube. It’s a long tube that attaches to the front of the housing and through some magic (aka meticulously designed internal reflective optics) produces a swirl around a macro subject. At under $150 in cost, this accessory offers solid value and potential to produce some eye-popping macro shots. 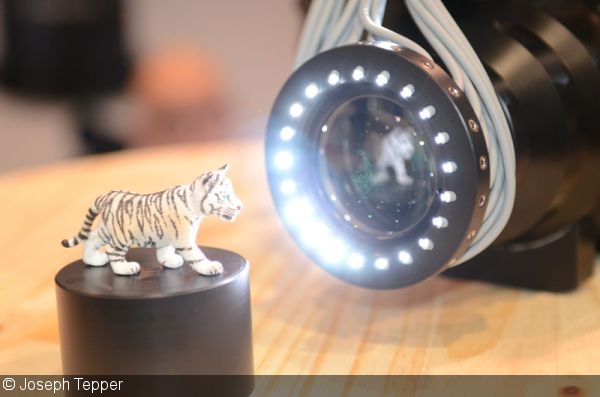 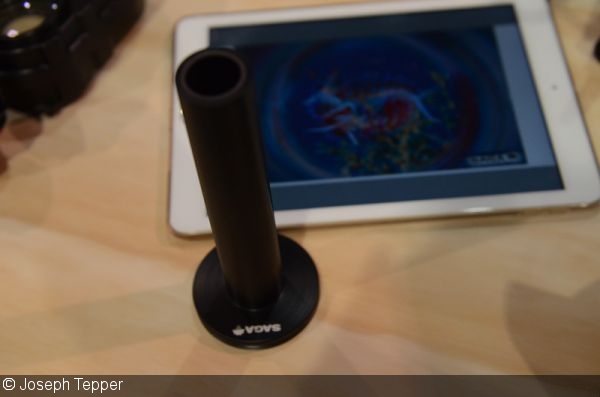 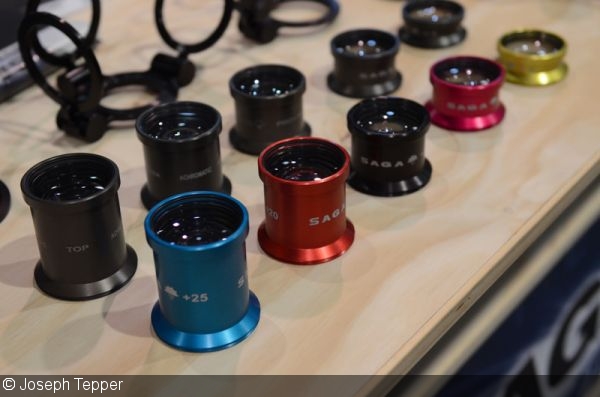 Why not choose your favorite color for a macro diopter?

Of all the categories in the underwater imaging industry that get ignored, the entry-level strobe market might make the top of the list. Our cup runneth over with lots of mid-to-high end models from the likes of Sea&Sea, Inon, i-Divesite and Ikelite—but quality entry-level strobes are few and far between.

And so, it was welcome news to see that i-Divesite is producing a new entry-level strobe (UW-DCS). It’s considered entry-level because the strobe only offers a fiber-optic sync option and is limited in power output (only a guide number of 20). However, don’t let these two points put you off, because there are a lot of advanced features packed into this strobe. 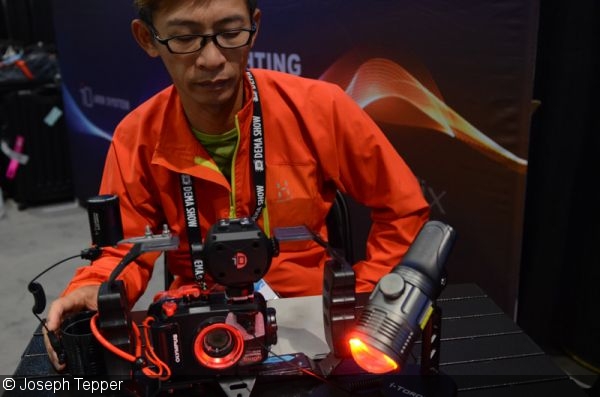 The new strobe also has a built-in video light in a slimmer form factor than the company’s higher-end SS2 system. The video light maxes out at 3,000 lumens and can be adjusted in intensity in five increments by using the central control knob. There’s also a 2,000-lumen target light and a red light option. The strobe runs on lithium ion batteries and can run for 60 minutes (full-power video light) and produce 700 strobe fires.

Users can add on an an optional dome-shaped diffuser or an optical snoot to spice things up. The guide number might not be high on this strobe, but that likely won’t be a problem for compact and mirrorless camera users focused primarily on macro and close-focus wide-angle. The final version of the UW-DCS strobe is expected in mid-December with an attractive price point of just $399. 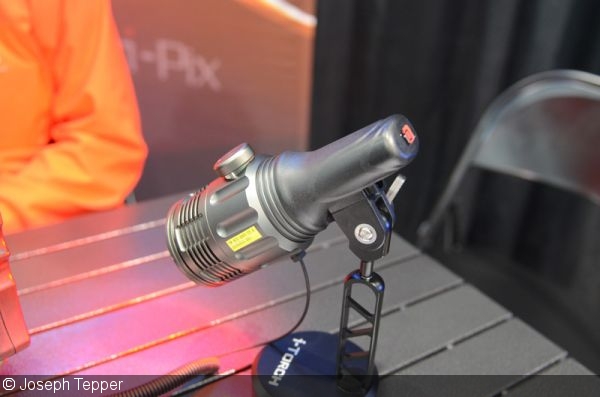 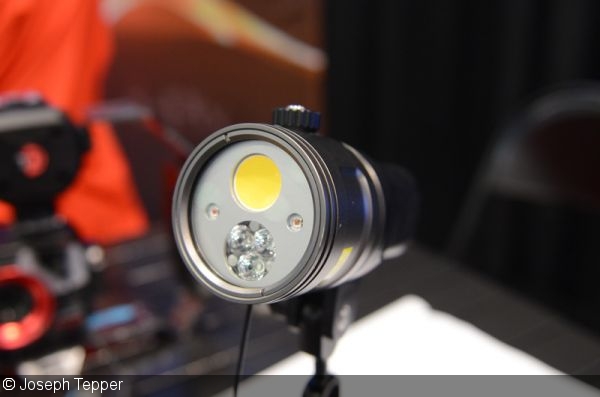 On the video light side of things, i-Divesite will soon release a new version of their popular Venom series. The RGB Venom will come in 6,000-lumen and 5,000-lumen versions aimed at image-makers looking to experiment with color effects. The 6,000-lumen version boasts a high color rendering index (CRI) of 80, while the 5,000-lumen version a more moderate CRI of 60. The on/off button and main dial control have been redesigned to improve ease of use.

Over at the Sea&Sea booth, we were excited to get our first hands-on look at the company’s housing for the Sony a7 III and its competitor, the Nikon Z7. It seems that the idea behind the Z7 is to appeal to current D850 users seeking a slightly more compact setup. Sea&Sea’s housing for the Z7 (and Z6) does just that by weighing in at 3.5oz (100 grams) lighter than their housing for the D850.

Notably, the Sea&Sea housing has two dial gears. This makes it possible to use both F-mount lenses via an adapter or the new Z-mount lenses. As well, the housing is compatible with the company’s Optical YS converter and allows the viewer to clearly see the upper control panel through a window. 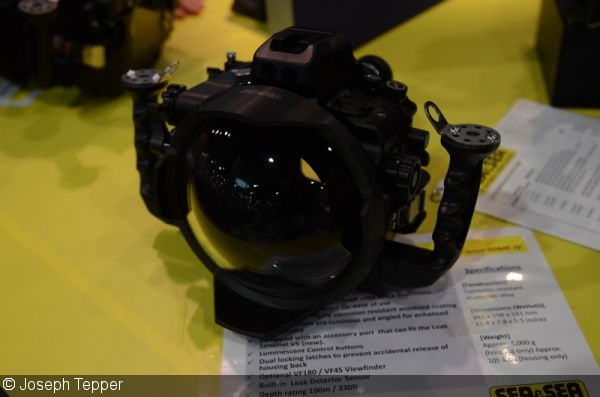 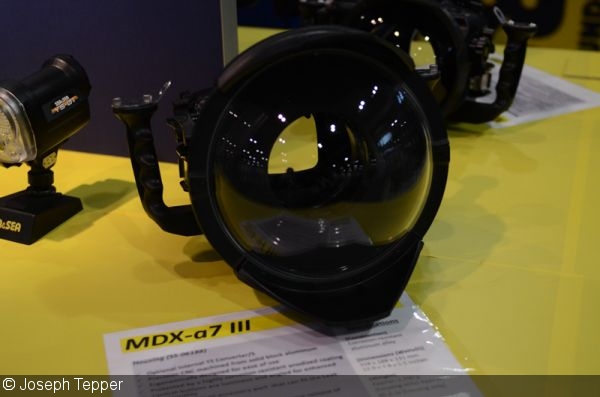 Sea&Sea’s other full-frame mirrorless housing—the MDX-a7III—features a so-called “Buoyancy Pocket.” This can be used to accommodate an extra battery charger for those shooting video. It is currently available with a price tag of $3,495.