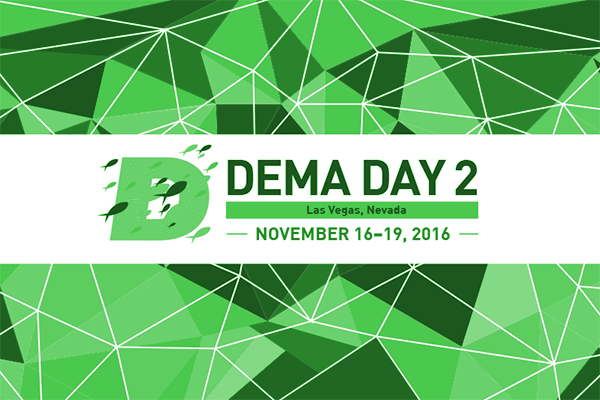 DEMA rolled on Thursday, with plenty of more show floor to cover. In case you missed it, check out yesterday’s coverage, which includes new products from Ikelite and Sealife, amongst others.

What’s great about DEMA is the amount and diversity of imaging products on display. You start with new action cams like the Tough TG-Tracker at the Olympus booth. Then there are the latest in a constantly improving line of mirrorless cameras and housings. And if you feel like plopping down $75K on a RED camera and Nauticam housing, there’s that available too.

Whatever product you’re looking for—we have it covered!

You may have seen our review of the Canon G7 X Mark II combined with the Fantasea housing, about which tester Chase Darnell wrote: “With the Canon G7 X Mark II and Fantasea FG7X II, we have a camera-and-housing combo that backs up its multipurpose abilities with top-of-the-line final output in terms of both image quality and performance.” 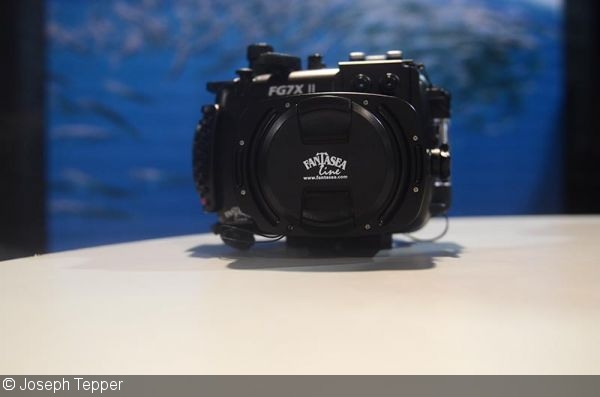 But for us editors who didn’t get a chance to take this impressive camera for a spin in the Cayman Islands, it was great to get a close-up look. The camera focuses super fast and processes images impressively.

In fact, you can take images at a rate of 8 frames per second (RAW/JPEG). If you’re considering a new compact, the G7 X II is a good option to look at and the Fantasea housing comes at an affordable price, while also offering refined ergonomics and advanced features.

Of note, Fantasea has announced that their housing for the existing Sony RX100 line will accommodate the RX100 V. The latest iteration in this popular compact line features vast improvements in autofocus. 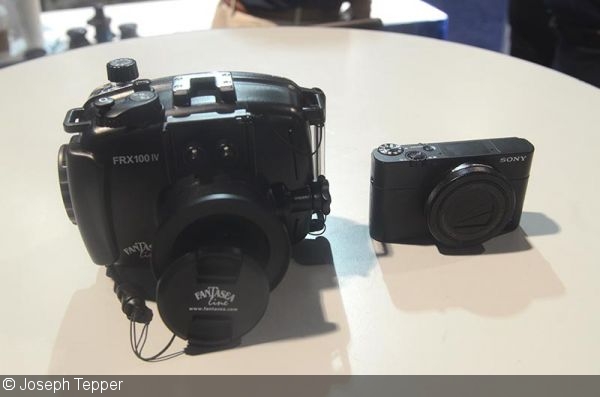 Brand new for this show are several new Fantasea wet lenses. There are three macro lenses: UCL-05LF, UCL09LF, and UCL-06LF. The first two (+5 and +9, respectively) are slightly more economical, while the UCL-06LF is being billed as a macro wet lens with premium optics for the more-advanced shooter. 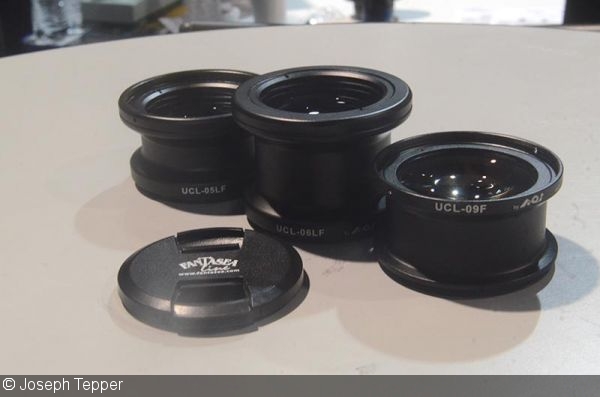 A look at Fantasea’s new macro lenses, which are universal to any housing brand with a 67mm threaded port or a conversion ring

There is also a new “mini-dome” wet lens that expands the field of view for large subjects. All of the lenses have a 67mm thread, which Fantasea is gradually switching over to with some camera models such as the Sony RX100 series. 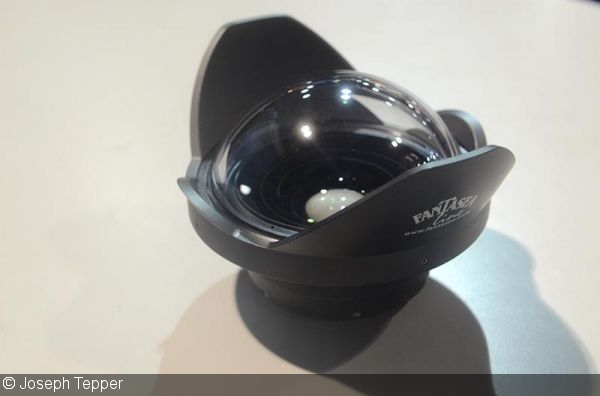 The Backscatter booth was a bit more colorful than usual this year with all of the new Flip 5 filters for GoPro on display. The big news with the latest iteration of Backscatter’s Flip filters for GoPro is that it can accommodate any HERO from 3–5 and is backwards compatible. 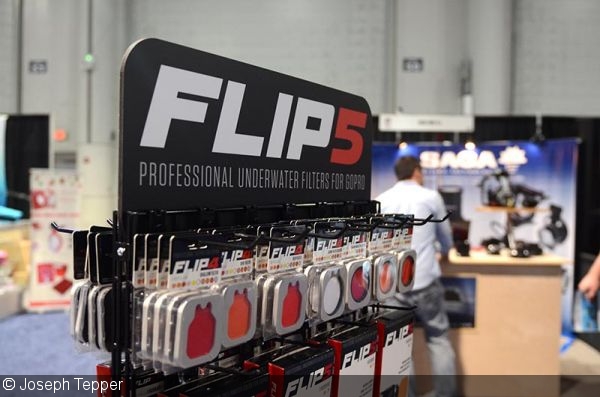 Look at all of those colorful filters!

With these filters, Backscatter is also including a nifty lens protector remover. In order to accommodate the GoPro HERO 5 into the housing, you need to remove a small lens “bumper,” which can be quite difficult. Backscatter has fixed this problem with this nifty accessory—something you’ll appreciate! 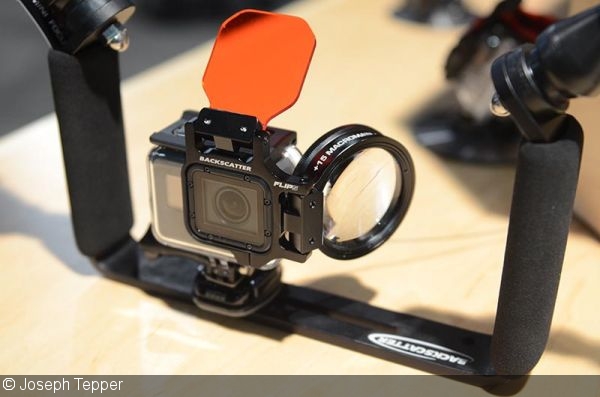 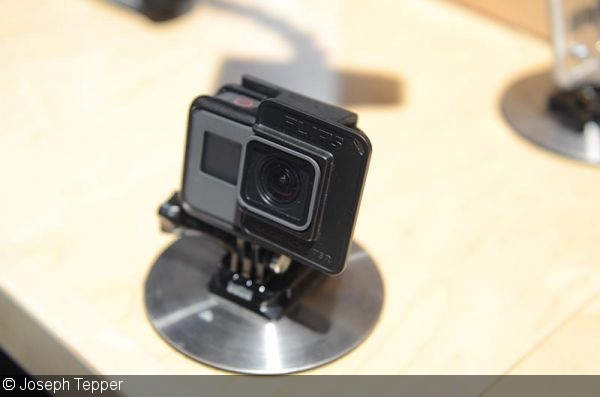 The Flip 5 comes in three kits: a single flip filter, a three filter kit (you can alternate only two at a time on the flip kit), and a pro kit with all of the filters you need to take solid underwater GoPro footage—including a Macromate Mini.

The Flip 5 system and filters are expected to ship in early January 2017.

A subset of team Backscatter, the Olympus booth had the company’s latest cameras and housings on display, most notably the OM-D E-M1 Mark II, just announced last month.

The Mark II has some impressive improvements, which we were able to test out at the booth. First and foremost, the ability to take 18 RAW frames per second is insane—no more missing that action shot on a shark dive or in natural light at the surface. 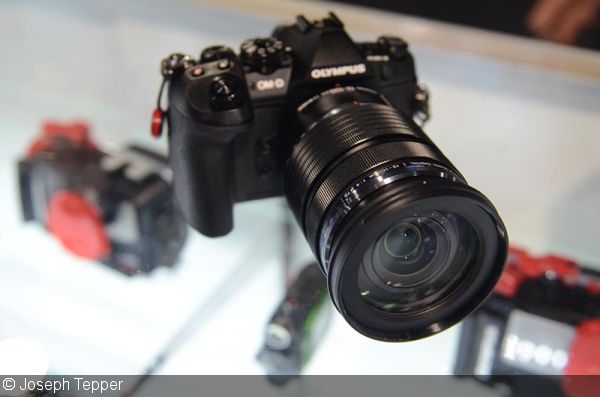 Also significant is that the OM-D E-M1 Mark II is fully weather sealed—short of throwing the camera off the boat into the ocean, it is protected without the housing. The camera ups the autofocus ante with 121 cross-type AF points over a wider area of coverage—along with a new algorithm to assist with tracking. 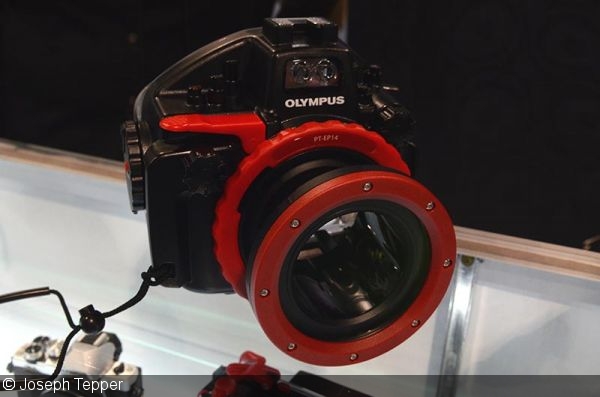 Finally, we got our first hands-on look at the Olympus TG-Tracker, an action camera/GPS tracker/sensor rolled into one. Almost indestructible, this action camera is waterproof to 100 feet out of the box and allows you to track temperature, depth and pressure. 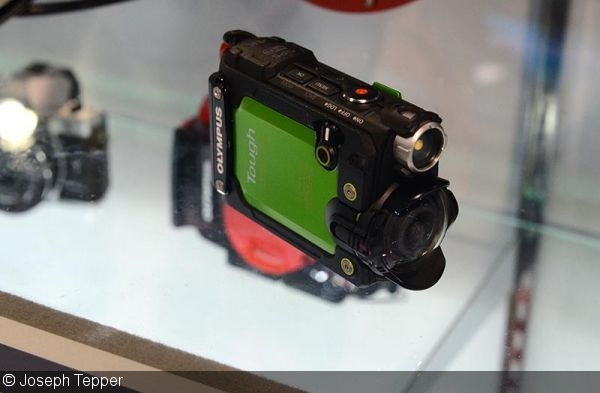 The Olympus Tough TG-Tracker is a GoPro alternative

Aquatica’s booth was littered with all of the newest housings for top DSLRs like the Nikon D500 and Canon EOS 1DX II. Starting off with the EOS 1D X II, we can tell you it feels like one of the most solidly built housings on the market. Product features include huge control knobs for easy control and the option to vacuum seal the camera inside the housing. 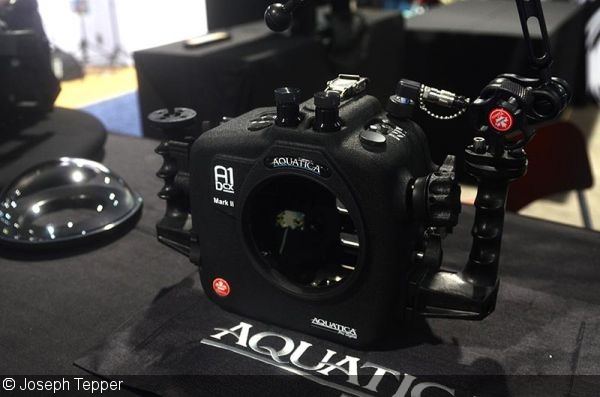 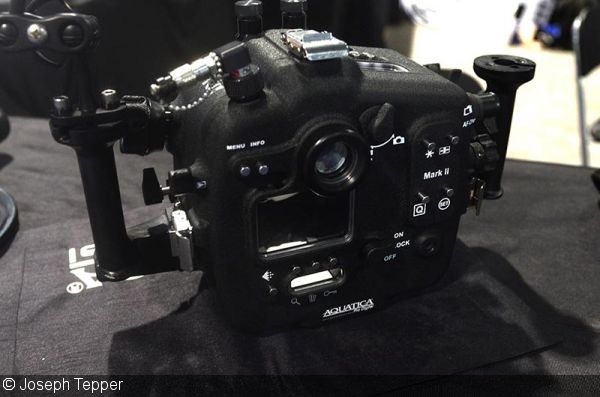 As a self-proclaimed Nikon nerd, I was also excited to see the Aquatica housing for the D500. It’s surprisingly compact (in a good way) and Aquatica really took their time to identify key controls and to move them closer to the user’s fingertips. Most notably, the ISO button is now within thumb’s reach, taking into account those underwater videographers who want to use this frequently. 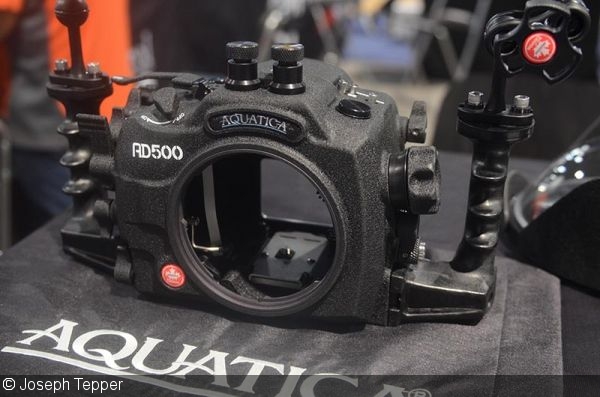 We also saw Aquatica’s housing for the Sony A6300 mirrorless camera. While this camera has been out for a while, what is new is Aquatica’s magnetic battery, which attaches right under the camera tray. It provides more than two additional charges—a key benefit for those looking to use the A6300 for videography purposes to prevent draining the battery. 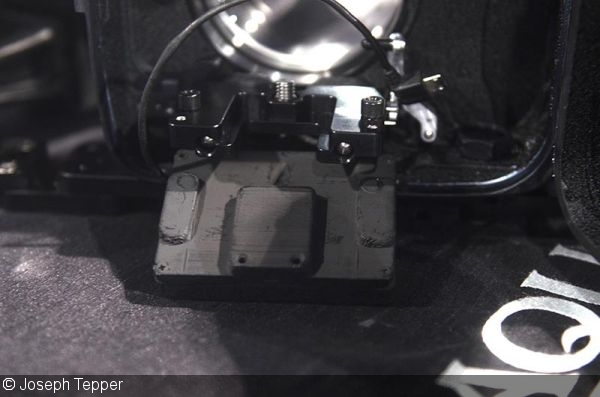 As always, the Nauticam booth was stuffed full of new and innovative housings. Nauticam is constantly pushing the boundaries when it comes to adding useful new features, while at the same time bringing products quickly to market.

This is the case with Nauticam’s housing for the Nikon D500. Announced and delivered within a month of the camera’s release, the NA-D500 includes an LED flash trigger to take advantage of the impressive 10fps burst mode. This feature also appears on Nauticam’s D5 housing. 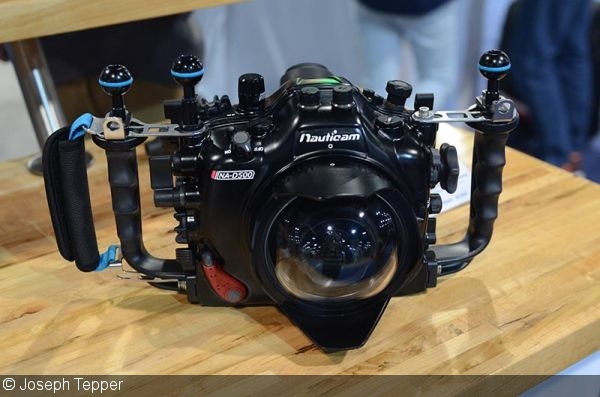 Ergonomic highlights include an emphasis on the camera’s autofocus ability, which is achieved by having separate controls for AF/MF and focus mode. Again, there’s an emphasis on providing easier access to ISO by making the control a large lever for underwater videographers.

Not to be too Nikon-centric, we did look at quite a few housings for Canon cameras. Announced just days ago, the Nauticam housing for the Canon 5D Mark IV is lighter than its predecessor and provides the opportunity to use a mounted TTL flash trigger for the convenience of through-the-lens flash exposure. 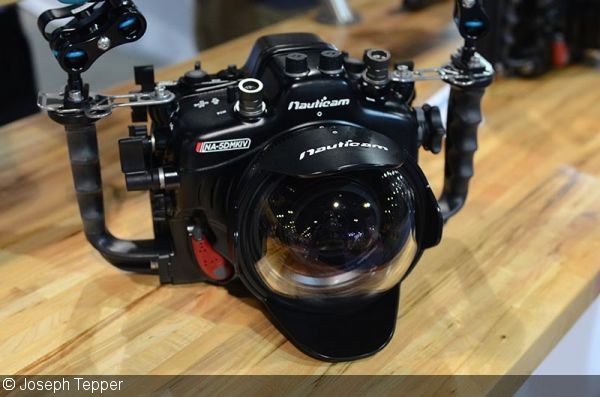 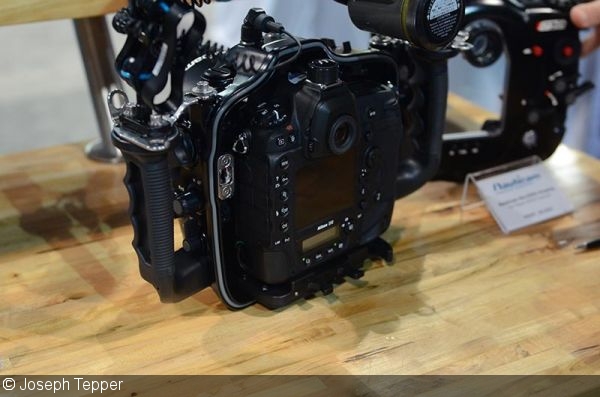 Nauticam has also continued to increase their support for Sony cameras, both mirrorless and compact models. Let’s start with the new Nauticam housing for the RX100 V: It can be secured with vacuum sealing, has a shutter extension for easy use with handles (especially gloves), and ships standard with the stainless steel brackets. 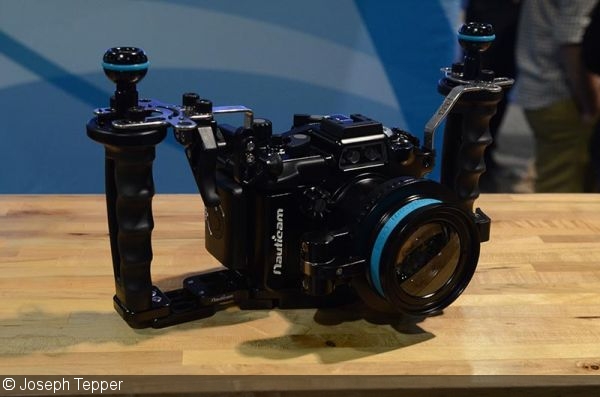 Taking it up a notch (slightly), we have the housing for Sony’s brand new A6500, which is marketed as a prosumer mirrorless camera. An extension ring allows the use of Canon lenses with a Metabones adaptor, which is great if you want to attach a fisheye lens like a 10–17mm. The team at Nauticam wants to make this a pro-level housing for a mirrorless camera by including build-in handles and USB battery packs. 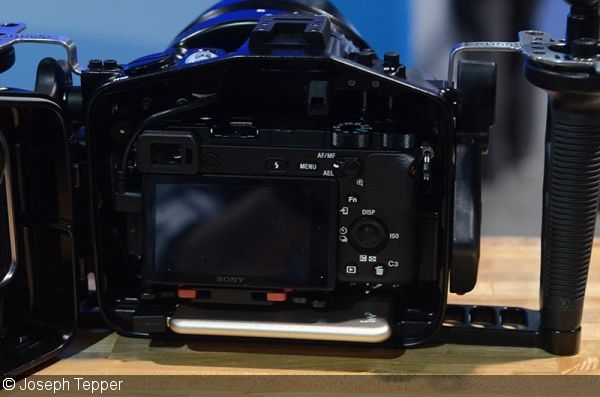 New and exciting alert: Nauticam will soon announce a DSLR wide-angle conversion wet lens. For cropped sensor cameras, this turns a 60mm lens into a wide-angle weapon with an angle of view of 110 degrees (150 degrees for full frame). This means you could go from shooting macro images of a seahorse to close-focus wide-angle on the same dive. More details are expected soon and the timeline for availability is roughly six months. 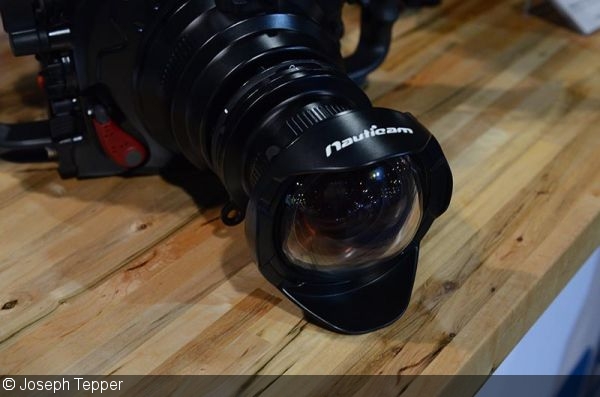 Nauticam’s upcoming wet lens will let you switch from macro to wide angle on a single dive... with a DSLR 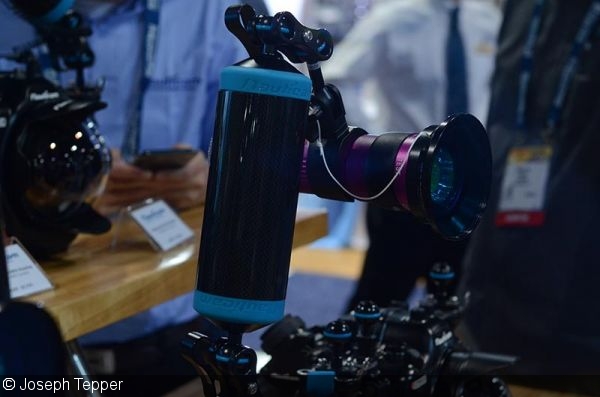 Remember that epic (literally) RED camera and Nauticam housing we promised at the start? Here it is. This is Nauticam’s housing for RED cameras with the Weapon LT (Weapon 8K Helium and the Epic-W 8K). It’s really a pretty impressive achievement of engineering. We watched as the camera was taken out and put back in, in a matter of moments—something rare for a film-grade camera.

In fact, you can swap out batteries or media storage without removing the camera from the housing. And there’s even a nifty place to keep your wrench built into the camera tray. It’s also super-portable and can fit entirely into a carry-on suitcase. 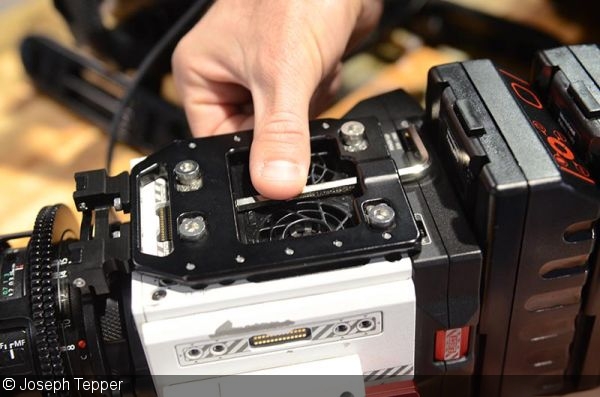 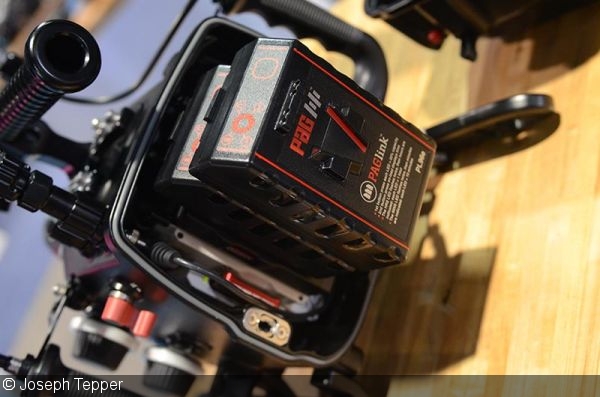 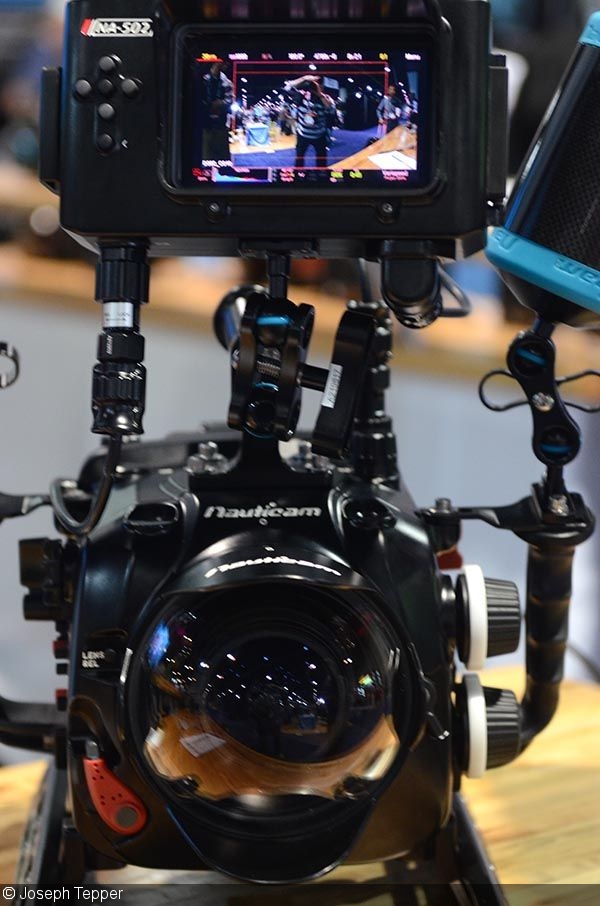 Taking a selfie in the monitor of a $60K camera

Well, that’s it from another busy day at DEMA with lots of new products to check out. Soon, we’ll be posting coverage from what turned out to be an awesome Underwater Imaging Cocktail Party co-organized by DPG and Wetpixel. 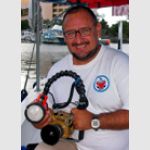