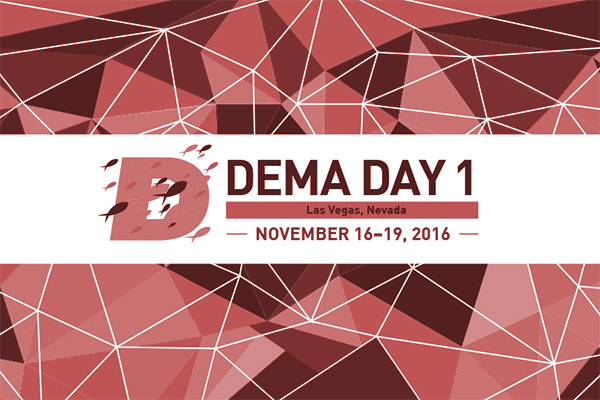 The 2016 edition of the DEMA show kicked off yesterday with a large crowd gathered in anticipation of what awaited them behind the gate. And now we have some answers…

If you haven’t already briefed yourself on this year’s show, make sure to check out our Underwater Photographer’s Guide to DEMA. It has all of the exhibitors, a schedule of the imaging presentations, and even some more details on the legendary DPG/Wetpixel Underwater Imaging Party.

If you’re ready to dive into the latest housings, accessories and camera gear, journey on. 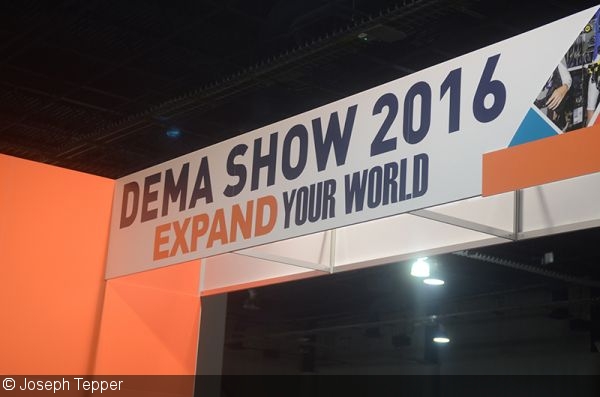 The DEMA show 2016 kicked off this week with big crowds, new products, and lots of excitement

Hard to miss, with a giant circular display in the imaging section, the Ikelite booth was a beacon to the busy crowd that rushed in Wednesday morning—including this intrepid DPG reporter.

Ikelite is one of the first manufacturers to produce a housing for new cameras, and they delivered with all of the cameras announced in the fall. First up, we got a look at the newest Nikon and Canon DSLRs, the D500 and 5D Mark IV respectively. 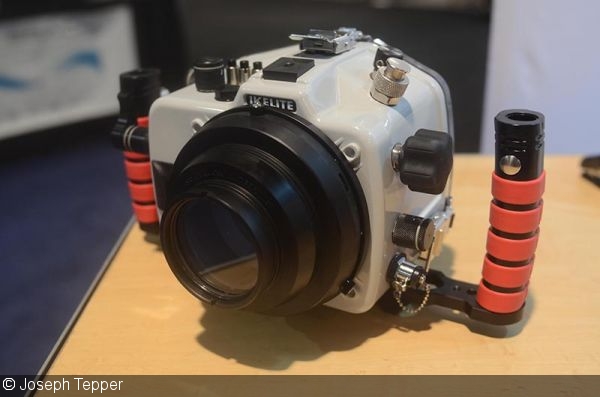 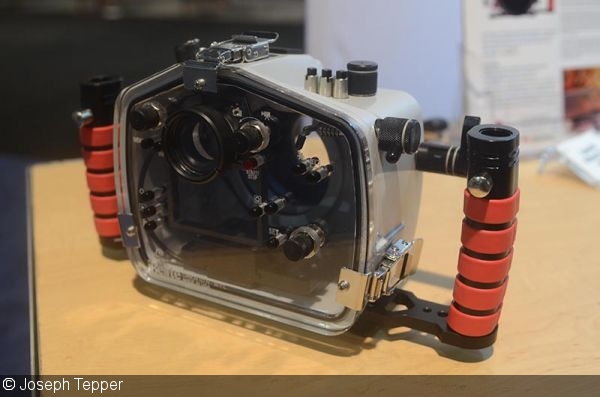 Both housings represent the latest iteration of Ikelite’s transformation from their old “clear” housings to the new “gray” ones. The color change is really the beginning in terms of improvement. The housings also feature Ikelite’s new “Dry Lock” port system, which features an exterior O-ring to prevent water from dripping into the housing and makes it more efficient to interchange ports.

There is also a vacuum system built in to the new housings, pre-installed. This can be useful not only for ensuring a proper seal at first, but also when using the system in rough conditions like surf and surge. 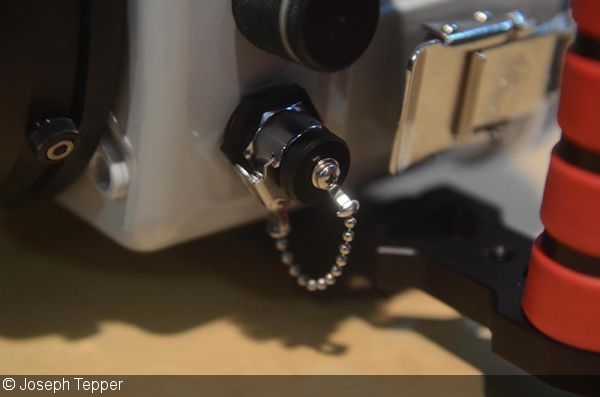 A close-up of Ikelite's vacuum system, which was demonstrably simple and effective to use 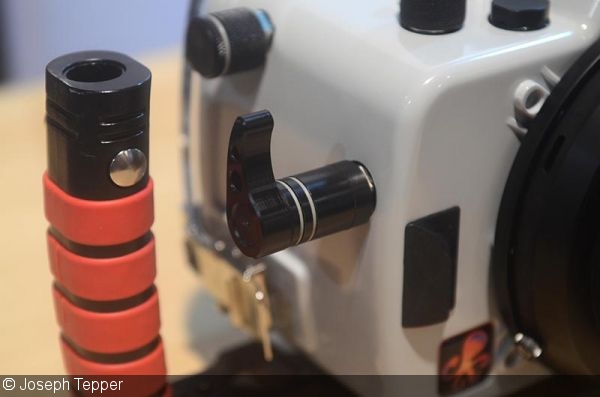 The RX100 V housing features the same new ergonomic shutter control featured on Ikelite’s DSLR housing. There are also some nice ergonomic control features like a self-centering zoom control (returns to the middle automatically) and an offset gear dial of the function ring to bring it closer to the user’s thumb. 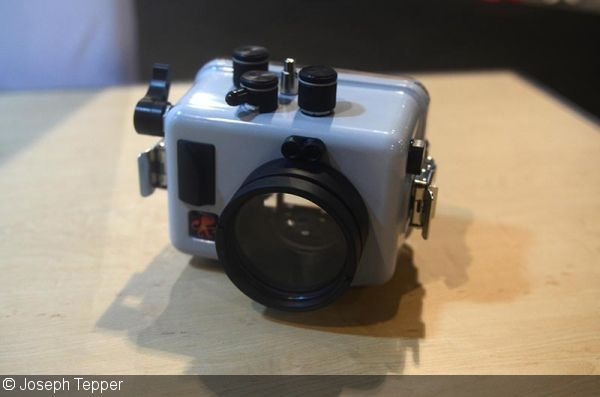 Along with the newly designed 8-inch dome, the RX100 IV/V housing comes both with and without the option to mount on a tray—for the ultimate compact setup 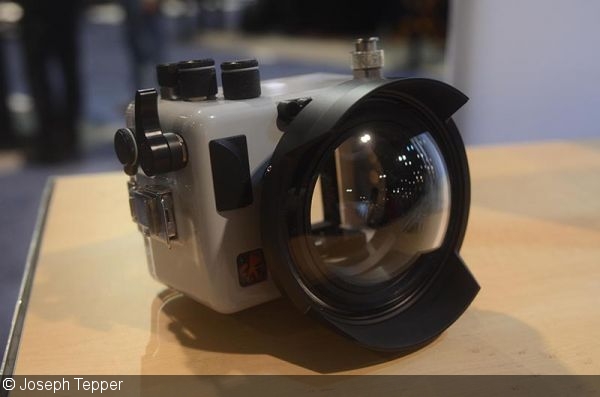 Ikelite also has a housing for one of the more under-appreciated cameras, the GX80/85 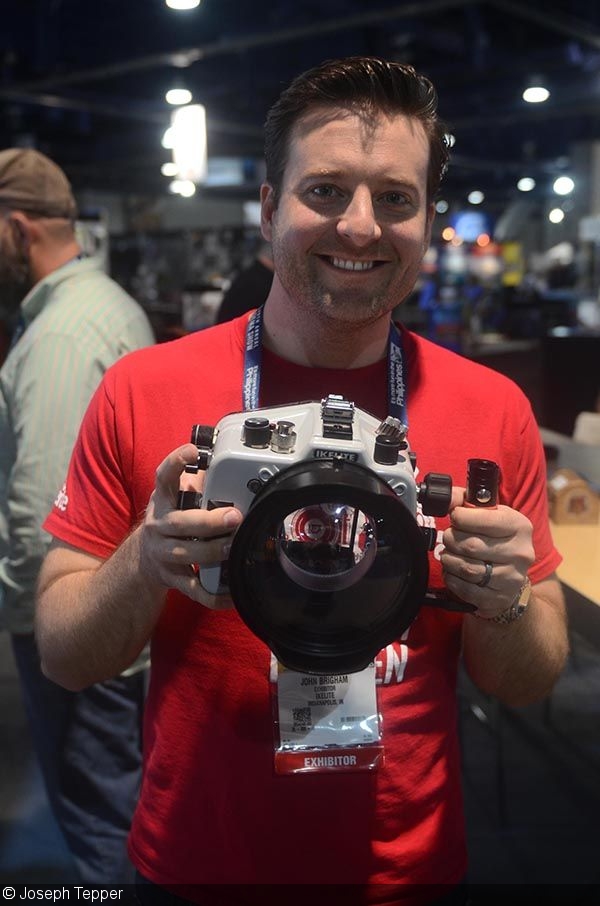 Ikelite’s John Brigham shows off the company’s beautiful new housing for the Nikon D500. Who wants one?

Confession: We got a sneak peek at SeaLife’s big DEMA announcement a couple days early. The DC2000 is the company’s latest and most advanced compact camera, built around a Sony 1-inch 20-megapixel CMOS sensor. The big improvements come in terms of pro-level specs and features.

On the video side, the camera shoots 1080p at 60 frames per second, which can be manipulated to create some silky slow motion. For stills, the camera shoots in RAW format, offering the most malleability in terms of post-processing. There’s also full manual aperture control, high-speed autofocus, and optical image stabilization. It’s really the next level for SeaLife cameras. 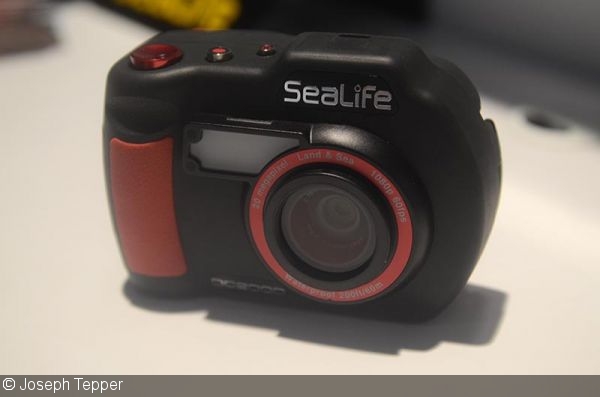 On its own, even without accessories, the SeaLife DC2000 is a powerful, prosumer compact camera 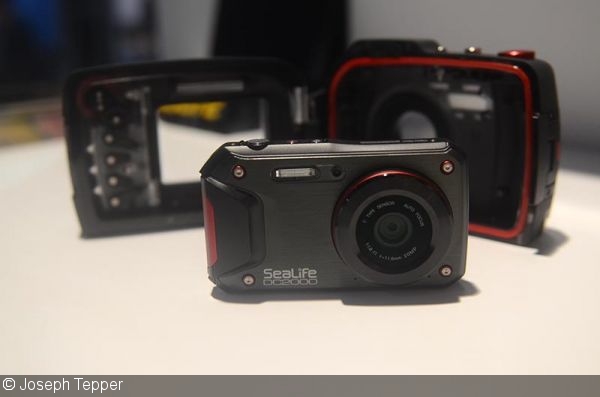 SeaLife spent a lot of time making the camera not only powerful as an imaging tool, but sleek and sexy in its own right 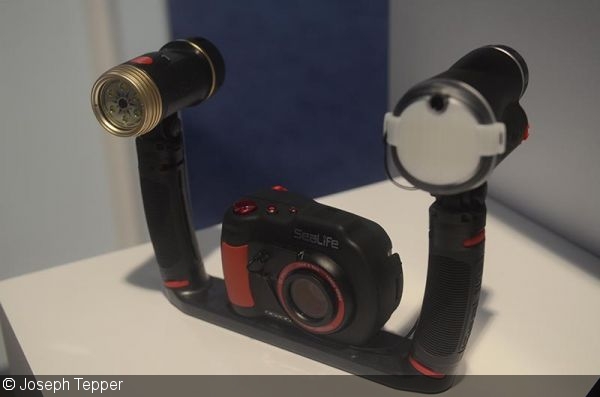 This dual setup offers flexibility with a strobe and continuous light

Speaking of light: SeaLife has launched two new video lights as well. First off, we have the Sea Dragon 2300 Auto Photo-Video-Dive Light. Billed as an all-in-one light, the 2300 features a color temperature of roughly 5000K to really warm up the colors in your images. It puts out 2,300 lumens at a wide 100-degree angle.

It’s “Auto” name comes from the fact that it offers Auto Brightness and Auto Flash detect mode, meaning you don’t have to worry about the light impacting your exposure negatively. 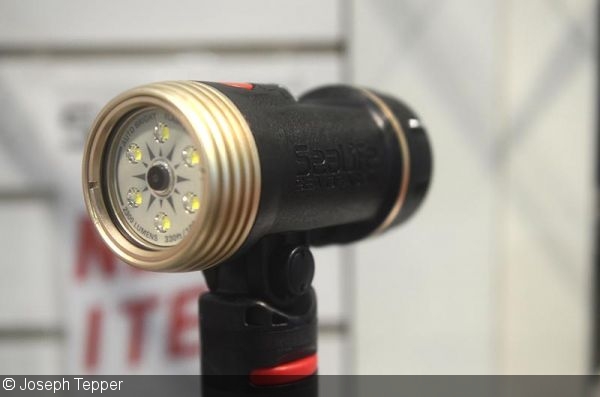 SeaLife is also offering the Sea Dragon Fluoro-Dual Beam light for those image makers that want to see things in a different light. It puts out 450–460nm blue light designed to be in the perfect range to “excite” the fluorescence on fish and the reef.

A nice additional feature is that the light can also switch into an 800-lumen white dive light, which can also be used as a torch or a focus light at night. 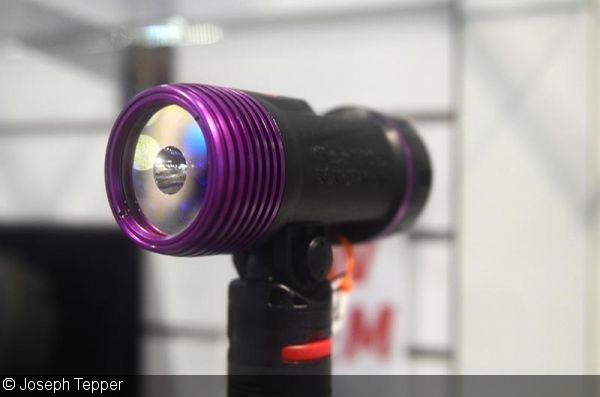 Continuing the trend of excitement surrounding the D500, Seacam had their housing on display at their DEMA booth. There are some nice improvements that highlight this housing.

Of note, particularly due to the camera’s improvements in low light and autofocus, is a new lever control on the housing that allows the user to switch between AF and ISO. No longer do you have to remove your hand to press the ISO button—it’s right there with autofocus. 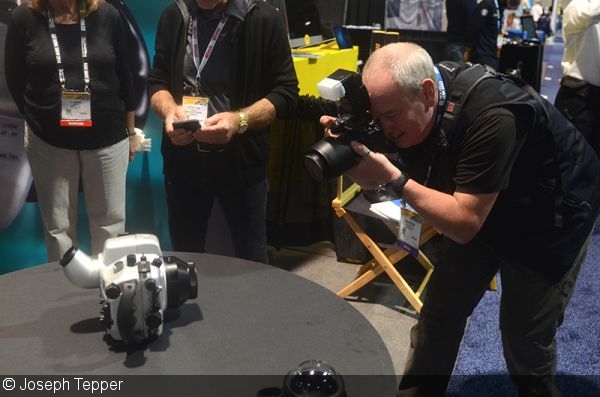 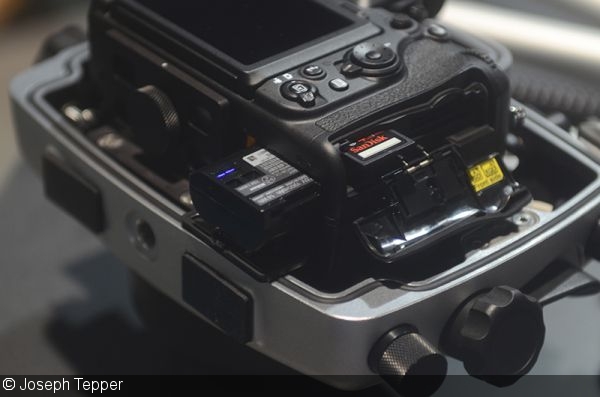 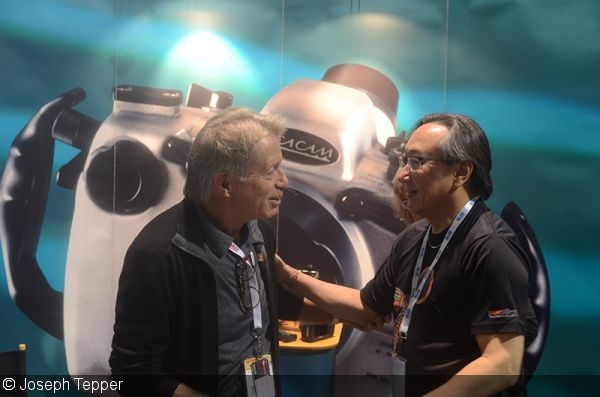 As reported at previous shows, Lenz is an impressive tool that turns your iPhone into a capable underwater camera. It features an optical dome lens that works both above and below water (field of view equivalent to topside).

The nifty finger touch controls provide access to all smartphone camera functions including pinch to zoom. There are also two internal color-correcting filters that can be accessed at any time.

The Lenz housing for the latest iPhones is depth-rated to 330 feet and is slightly positively buoyant, designed to float. 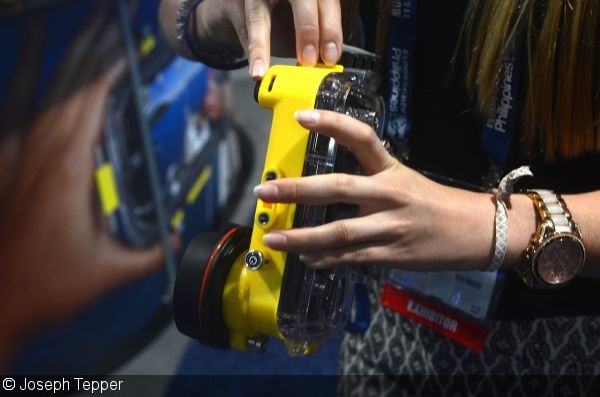 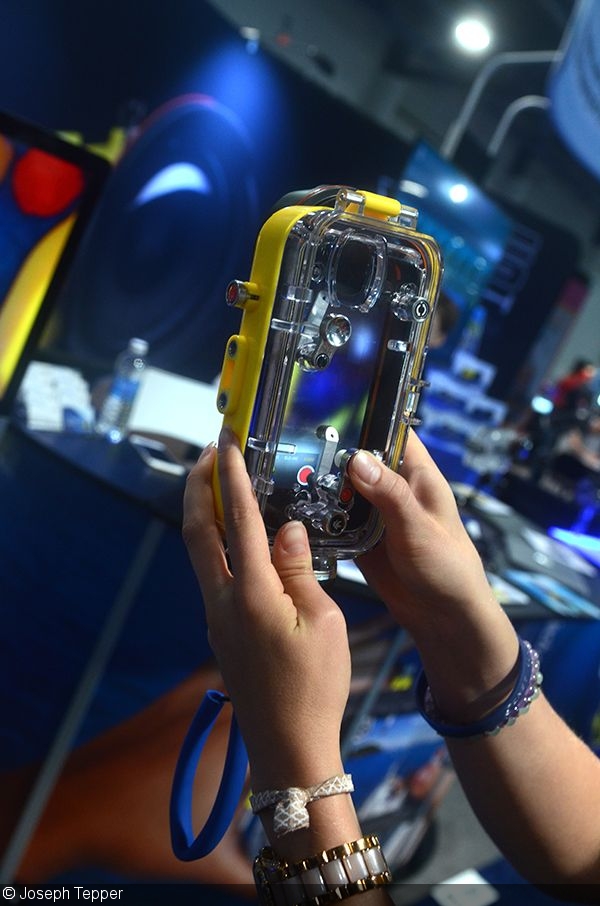 Innovative controls make it possible to access the phone’s touchscreen

Saga is always coming up with innovative new accessories for us nerdy underwater photographers—from fiber-optic ring flashes to their “magic ball” wet lens. The latest innovation is the “Trio,” which is a self-contained macro wet lens. The Trio name comes from the fact that there are three possible combinations: +5, +10, and +15 (stacking the +5 and +10).

The advantage is the ability to switch between diopters without having to remove anything from your port. You can switch between the different diopters just by flicking one of the two levers. 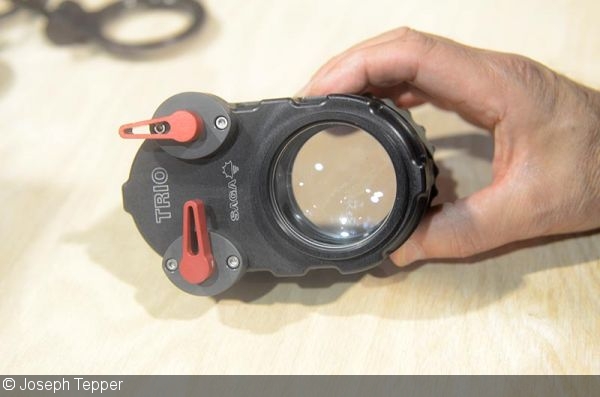 We had the chance to test it out on a miniature frog toy—and the simplicity of the setup is pretty impressive. In terms of optics, we obviously haven’t had the chance to use in the water, but there were some sample images taken on display and they don’t appear to show any aberration and had impressive image quality. 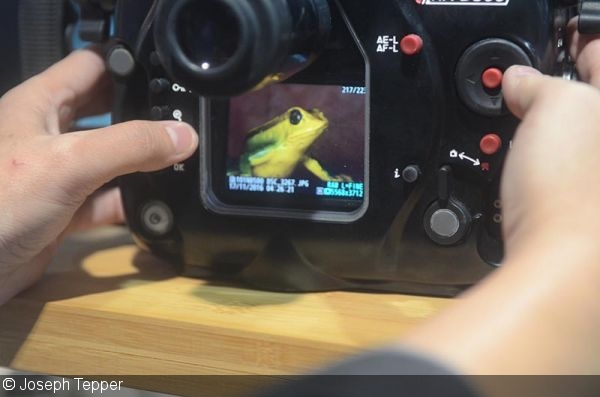 Testing out the Trio lens on a small (fake) frog

That’s all of the booths from our first day of coverage. Soon, we will have day two of our DEMA coverage along with some (fairly) embarrassing images from the DPG/Wetpixel Underwater Imaging Cocktail Party. Until then, here are some other highlights from the show floor! 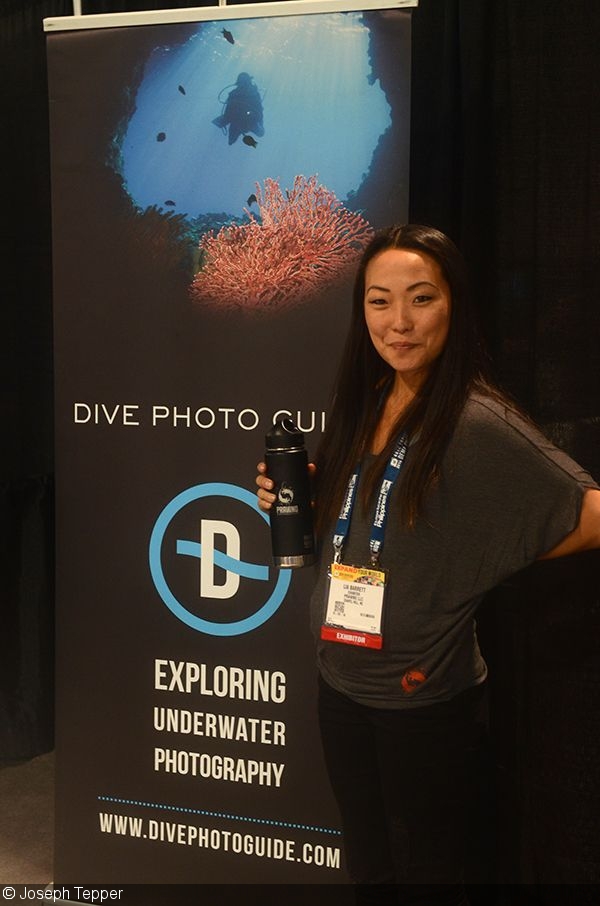 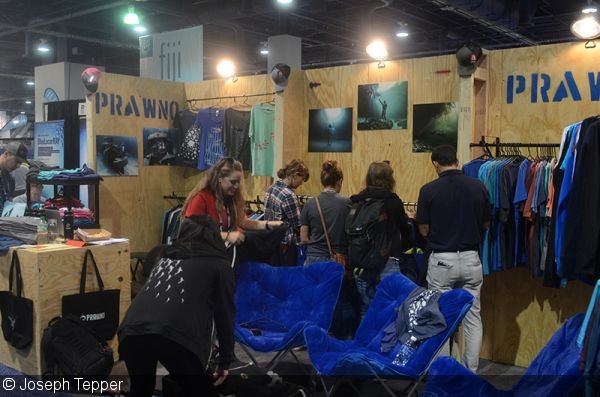 ....meanwhile her Prawno apparel booth is doing well with business! 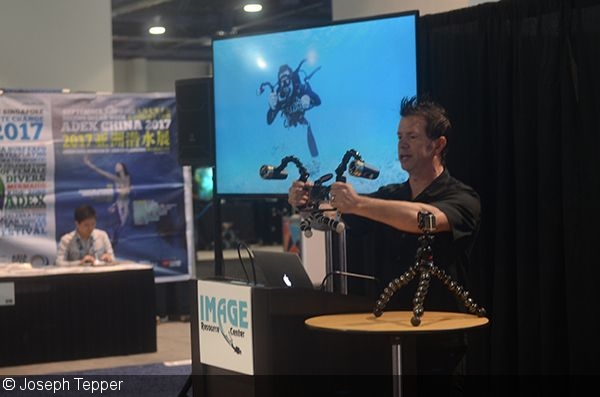 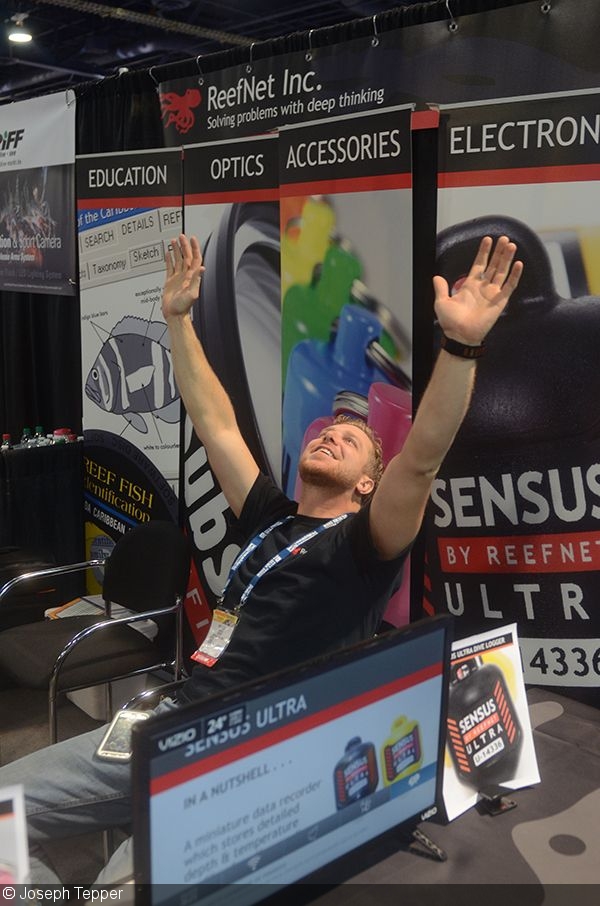 Reefnet’s Keri Wilk seems grateful that the first day of DEMA is wrapping up. There’s always another day, Keri