After a slightly shortened night’s rest (in no way due to the Underwater Imaging Party), DPG editors returned to the show floor to chronicle the latest gear products.

On the rocket docket for today: a groundbreaking housing style, a new creative macro lens, and a 20,000-lumen beast of a video light. So, read on!

Most likely, the camera garnering the greatest buzz at DEMA continues to be Sony’s a7 II. Subal sensed this growing energy in recent months, unveiling their housing for the a7 II (and original A7). Subal representatives call it, “the most popular housing.” How could it not be when you combine a full-frame mirrorless camera, speedy autofocus and top-notch image quality with the ergonomics of a Subal housing? Oh, and it’s available in black, “Subal beige,” and graphite. 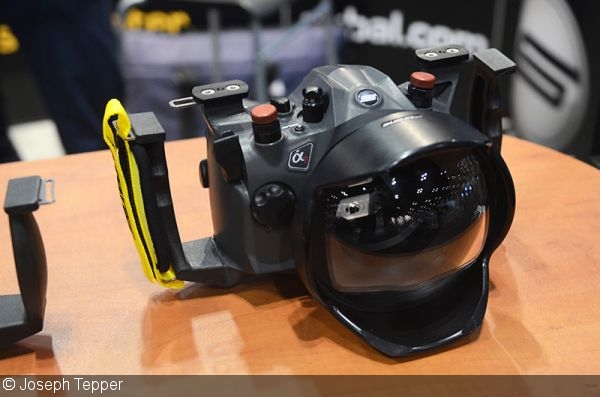 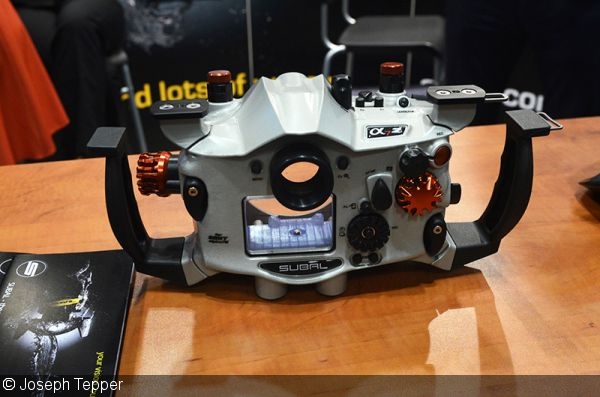 Looking at the Subal housing for the Sony FS-7, it almost looks too small to be for a pro-quality cine camera. And Subal claims it to be, “the smallest housing on the market for professional results.” Amongst its features you’ll find fully mechanical control in case of electronic control issues. The electronic controls on the handle (within thumb’s reach) include on/off, electronic zoom, manual focus/autofocus, and start/stop. 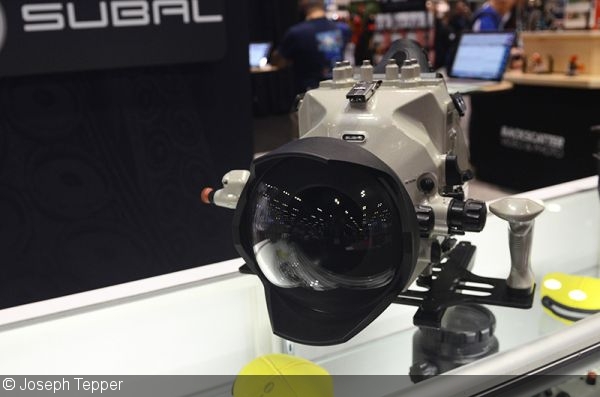 Given it’s for a professional-level camera, Subal’s housing for the Sony FS-7 is surprisingly sleek, aimed at making it easier to maneuver in the water than many other rigs 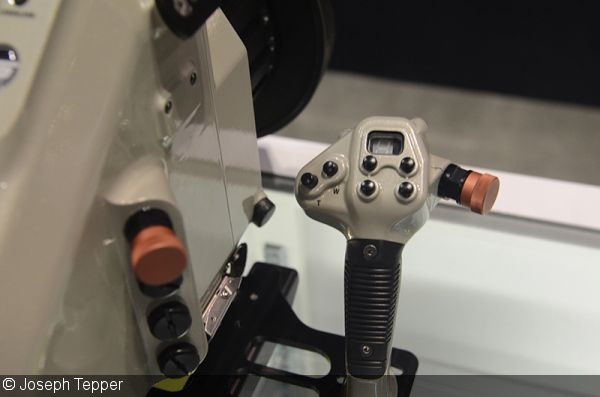 Known for their solid machined composition and selection of a dozen-plus color finishes, Aquapazza housings offer aluminum durability at a lower price point. At this year’s show, Aquapazza had several new models to show off—with perhaps the most exciting being that for the new Sony a7 II. 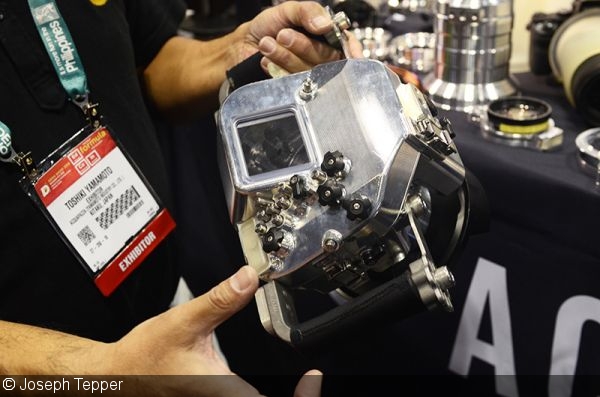 The controls on the back of Aquapazza’s housing are angled slightly outward, making it easier to access and less crowded

The new housing features a one-step lens attachment, without the need to remove camera body from housing. There’s also a custom zoom gear for the popular 180mm macro lens. Users can attach the Sony strobe, thanks to extra space at the top of the housing; at the same time, two bulkheads offer the ability to customize your choice of strobe connections.

Aquapazza also had on display their now-available housing for the Sony RX100 IV. Of note, this housing allows the user to both turn on and off the pop-up flash. Aquapazza’s new adjustable hand grip fits a variety of housings, from action cameras all the way up to larger compact and mirrorless models. 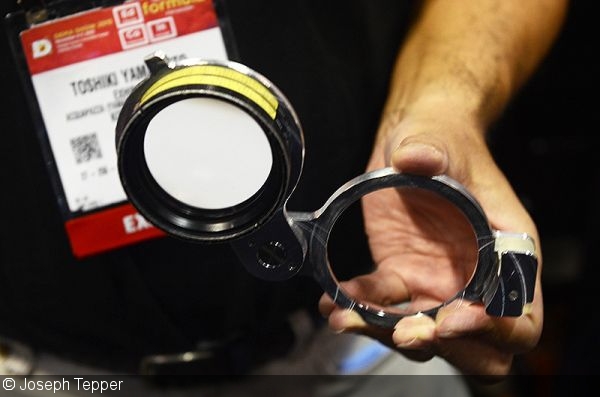 In addition, the company now produces a flip holder for filters and wet lenses

Over at Ultralight, we witnessed the importance of paying attention to detail. Take for example their new clamp (the AC-CSF-28), which features a finer thread to ensure more smooth, accurate adjustment of the clamp. How small of a detail achieved this? Let’s just say the old model had a 1/4-20 thread, versus a 1/4-28 in the new one. 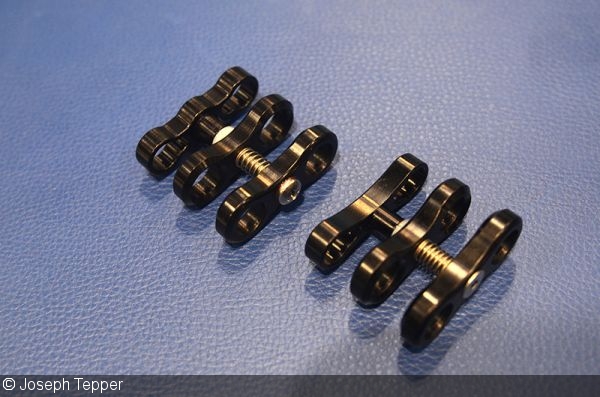 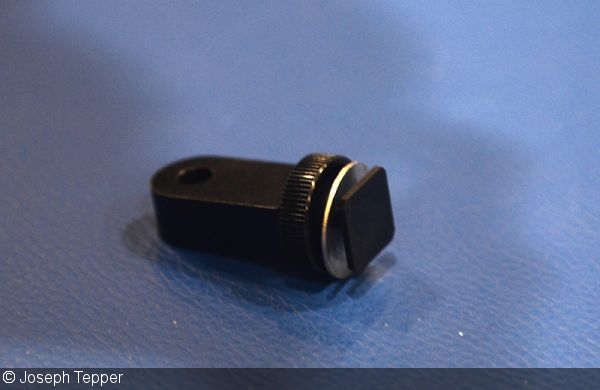 The new ADHS-YS is a cold shoe adaptor for YS mounts, such as strobes and video lights. Rather than turning the entire adaptor, attachment is achieved by tightening a screw 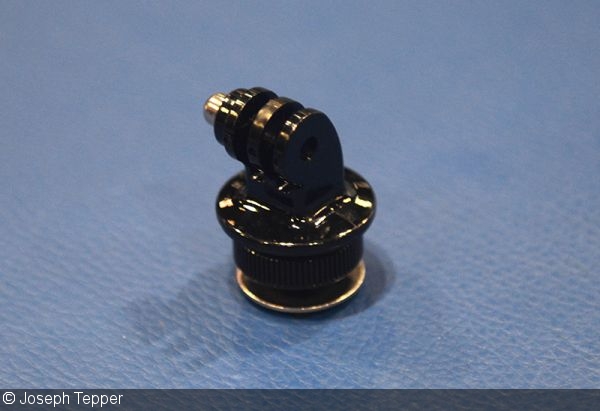 Ultralight has created cages for GoPro housings to help secure the camera to the mount of your choice. They are working on a new prototype latch that will allow the cage to fit the new standard GoPro housing. 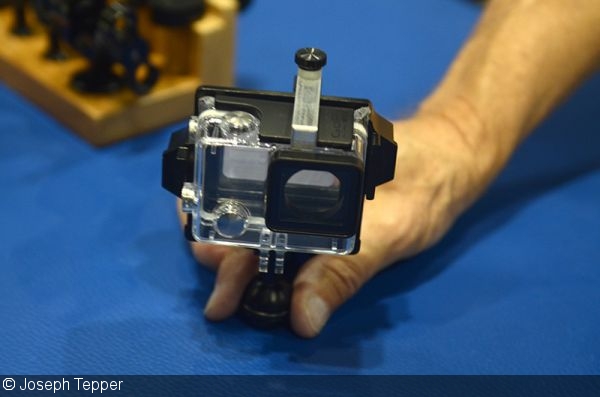 Fix has really blossomed as a video light brand, earning its own separate booth for this year’s show. The star of their booth, arguably, is the new Neo Premium 2200 DX, which features a very high CRI value of 95, implying excellent color accuracy. Similar to other Fix video lights, the Premium 2200 DX offers 1 percent increments in power. 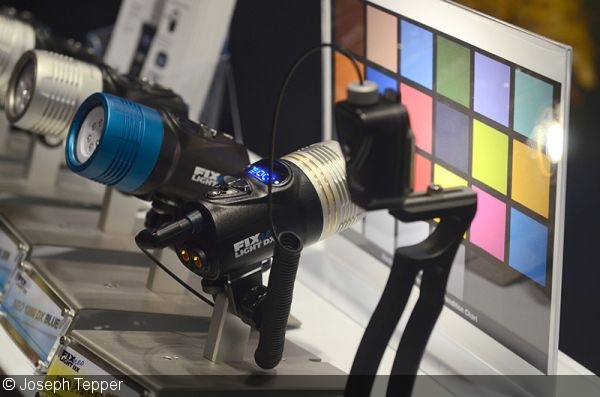 Fix’s Premium series is put to the test in terms of color accuracy. It should pass with flying “colors” thanks to it’s CRI of 95

Fix also displayed two versions of the Aquavolt, the traditional Aquavolt and the Aquavolt Mini. The mini is smaller in form, but still offers up an impressive 5,000 lumens. The full-fledged Aquavolt doubles that output to 10,000 lumens, along with an LCD display that shows exact output and burn time remaining. Both lights are compatible with the company’s Fix Neo Remote Control and are expected to start shipping towards the end of November. 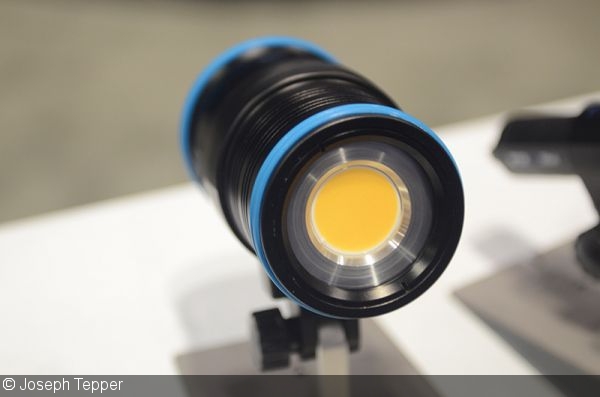 The full version of the Aquavolt offers 10,000 lumens 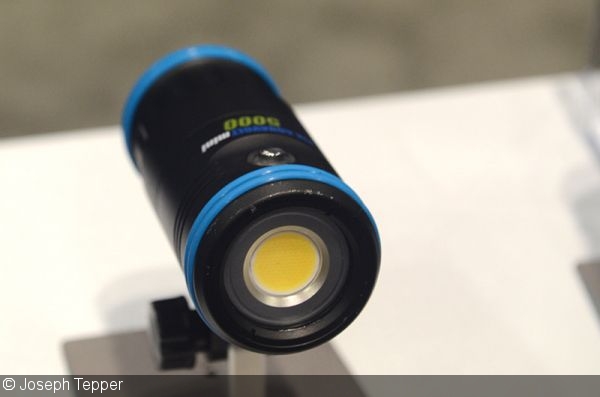 Beneath the Surface has emerged as a popular manufacturer for camera trays, arms, and nifty accessories. The selection of the latter expanded this year with two new innovative accessories. The first, a working prototype described as a “GoPro Trigger System,” allows the user to start/stop recording from the tray’s handle, thanks to a cable. 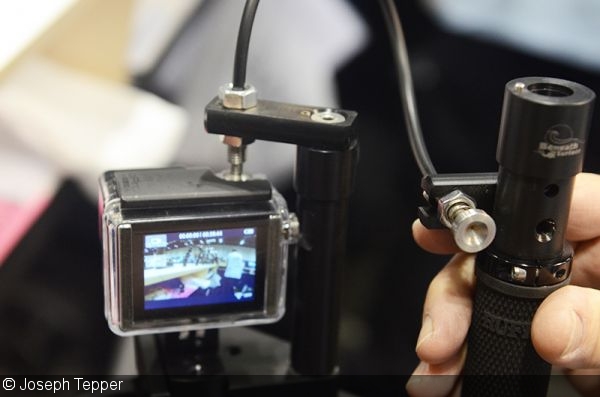 The trigger system can work with any existing GoPro HERO model, and is expected to retail for $199 (without tray) 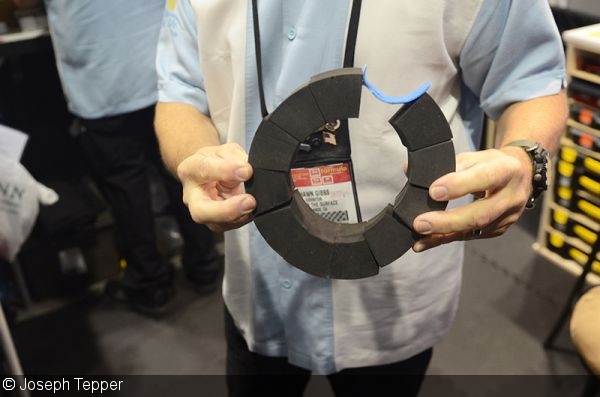 Beneath the Surface also unveiled a float port system, which is fully adjustable to fit any diameter port. This will be of particular use for long, heavy macro ports

Going to the Saga booth is the underwater photographer’s version of the candy store. Every year, it seems the engineering team seems to dream up something spectacular. Last year, it was a fiber-optic snoot. This year: the Magic Ball.

A tiny bead of perfectly crafted glass incorporated in this wet lens attachment produces a unique effect—with a centered fisheye ball and abstract background. Sorry for the poor description, but hopefully this image explains the cool effect. 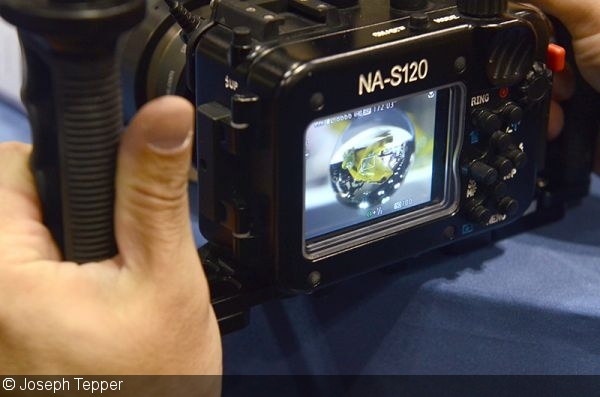 The Magic Ball creates a circular fisheye image in the center of the frame, with blurred abstract surrounding it 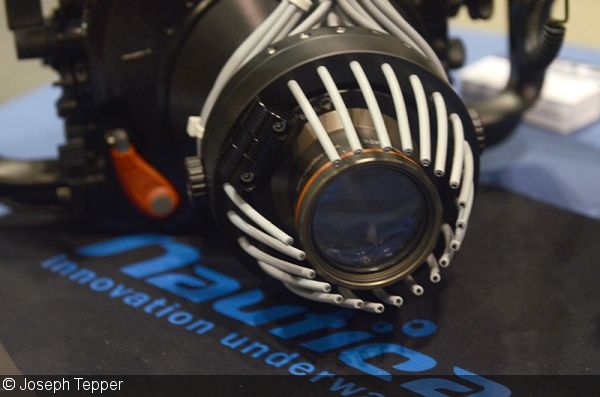 Saga is known for innovative accessories, such as this ring flash

XIT is always a fun stop, with all of their cool accessories. They make custom hoods for monitors, optical video light controls, and dedicated underwater tripods, among other things. 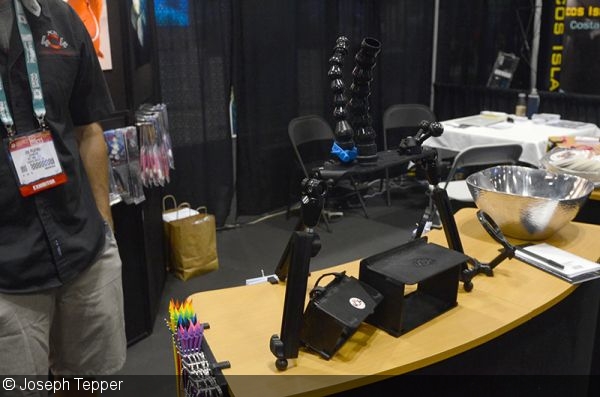 Over at Keldan, a company known for high-end video lighting, it wasn’t a light that was in (or should we say “made”) the spotlight. Instead, it is Keldan’s new filter system, which works to create better color accuracy while also taking advantage of the shadow-eliminating, detail-enlightening ability of the company’s powerful strobes.

The idea is to attach the spectrum filter on the lens of your camera, which converts ambient light to daylight for excellent color rendering. An ambient light filter turns the 5,000-Kelvin output of Keldan’s lights to ambient light. The result is more seamless blending between natural and artificial light. 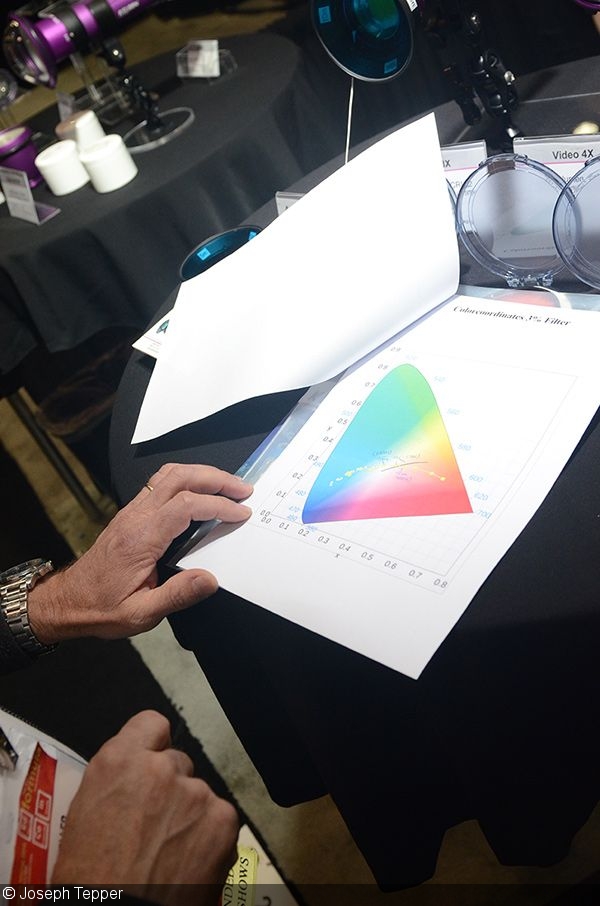 Ok, now to the bright stuff. Keldan’s always been known to be the choice for pro-level underwater videographers. But apparently such users are demanding even more power from their lights. And so, Keldan has rolled out the Video 18X (20,000 lumens!) and 24X (26,000 lumens!). Both models have self-contained batteries (rather than a separate canister) and a CRI of 80. 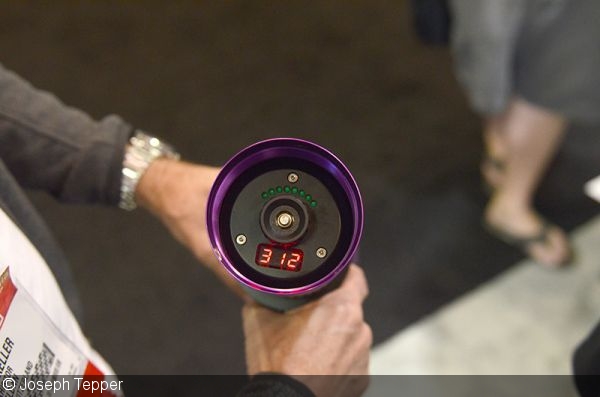 A noticeable trend at this year’s DEMA is an explosion of cases, housings, and waterproof solutions for smartphones and tablets. Aryca is one such company offering both hard and soft cases for iPhones. The addition makes your iPhone depth-rated to 20 feet—ideal for snorkeling and watersports. 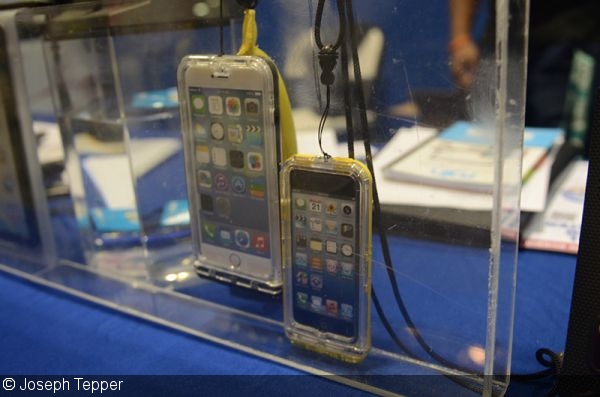 iPhones and iPads are put to the test at the dunk tank at Arcya’s booth. The cases are good down to 20 feet

We wrapped up today’s floor coverage with some more video lights, albeit more on the compact side of things. Tovatec’s claim to fame is the creation of the first-ever dual-mode (narrow- and wide-angle beam) video lights. That tradition continues at DEMA 2015 with their launch of the new Fusion light series.

The Fusion lights come in three outputs: 260, 530, and 1,000 lumens. They feature an over-pressure safety valve and can be attached to your rig’s arm with an optional adaptor. Most unique, the use of a pull back hood allows you to control your light’s exact beam angle from 12 to 100 degrees. 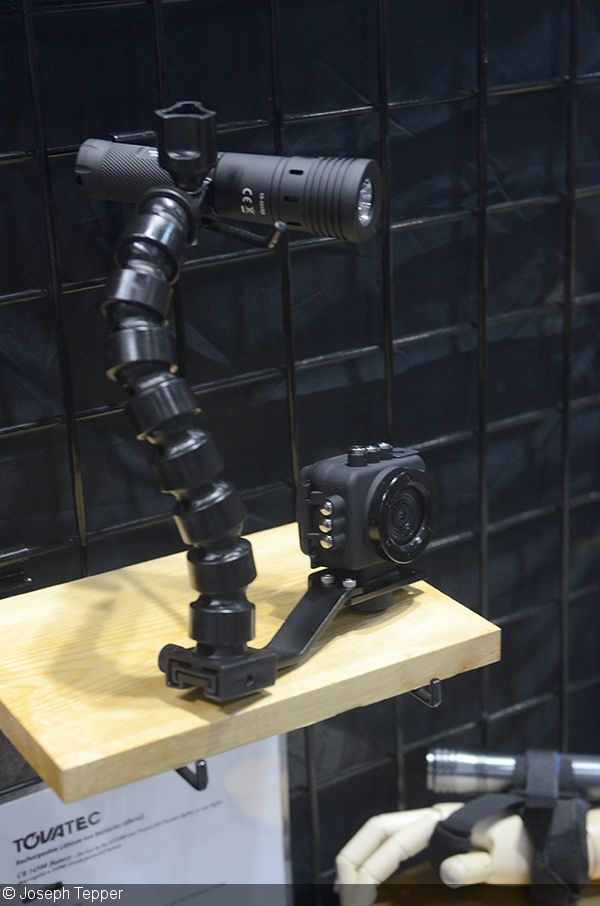 Another day, another set of innovative, bright, and (in some cases) expensive gear. And we want it all! Until tomorrow…