Day two of DEMA 2014 rolled on with more amazing speakers at the Image Resource Center, underwater photography fans by the droves, and more shiny new gear to check out.

At this year’s DEMA, veteran DSLR housing maker Aquatica has ushered in their era of products for action cameras. These include their action cam tripod, with a three-ball system to make it more adaptable to the environment. 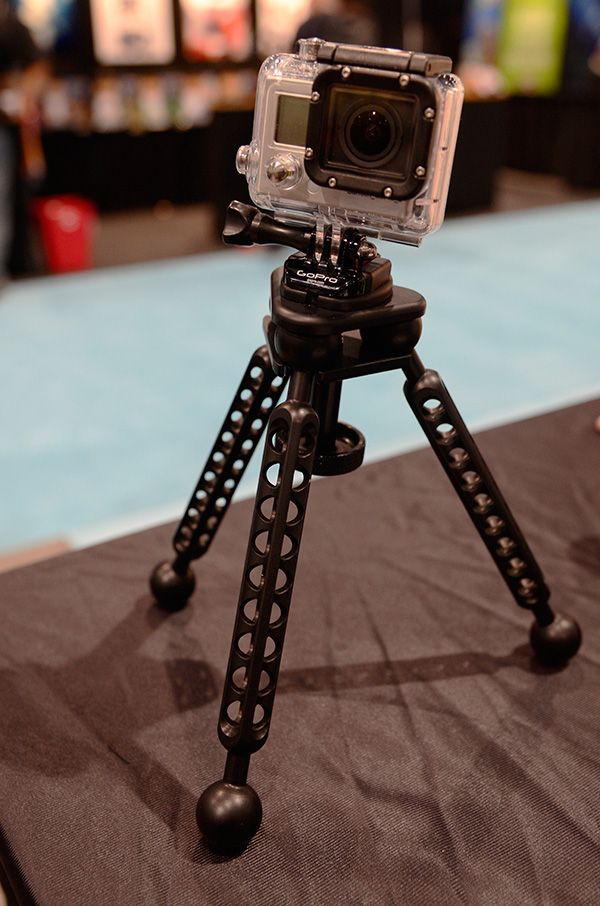 There’s also a new boomerang tray—the unique shape has erupted in popularity as it limits any flare and spare fingers getting into the wide-angle view of the GoPro and other action cameras. 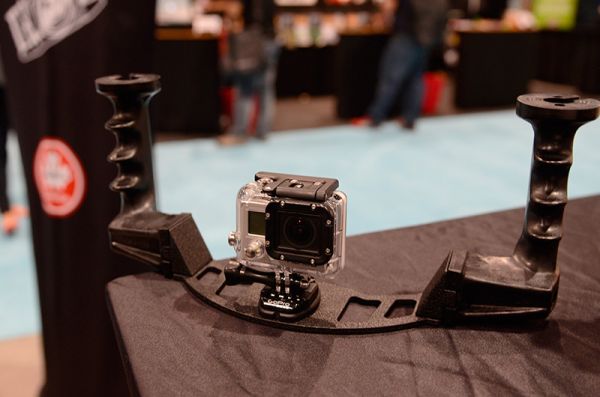 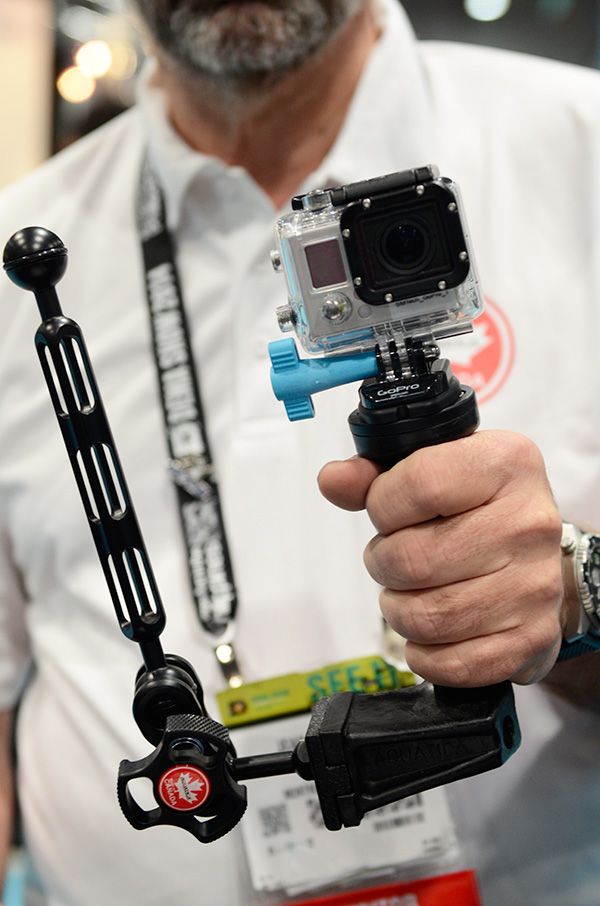 For a more beginner-level action cam setup, Aquatica is also offering a uni-grip handle that can fit a single continuous light.

In the DSLR realm, we can expect to see a prototype for the Nikon D810 soon (maybe even at this very show). From what we’ve heard, it boasts very similar craftsmanship and ergonomics to those found on the previous D800. In related news: All future Aquatica DSLR housings will come standard with vacuum circuitry, so all you’ll need is a valve and pump to get it vacuum sealed. 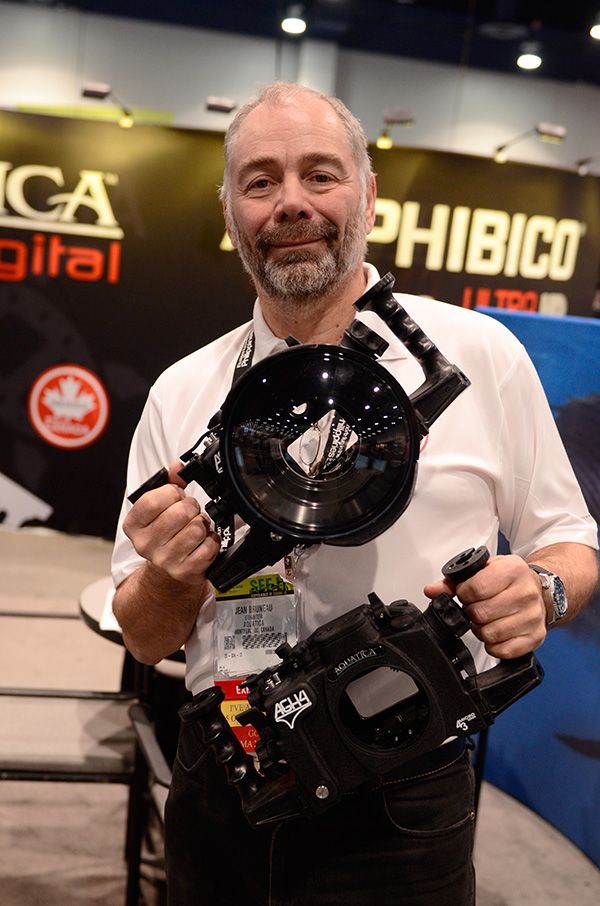 Jean from Aquatica models their housing for the Panasonic GH4.

Also on display was their housing for the Panasonic GH4, which features an extended ISO lever that you can reach with your thumb without removing your hand from the handle. The housing also features an Amphibico-style rotating latch and the ability to remove the camera with lens and gear still attached (a rare feature even in DSLR housings).

Last goodies at the Aquatica booth: their new TLC floatation arms, which come in both 8-inch and 11-inch versions with ½ lb and 1 lb lift force, respectively. There were also updated traditional arms made 12 percent lighter by removing some of the metal bulk while keeping the strength and new tri-lobe knob clamps—expected for release soon.

One of the popular new cameras in the underwater world is the Sony A7, which has the ability to shoot 4K video. BS Kinetics is one of the companies producing a housing for the camera. 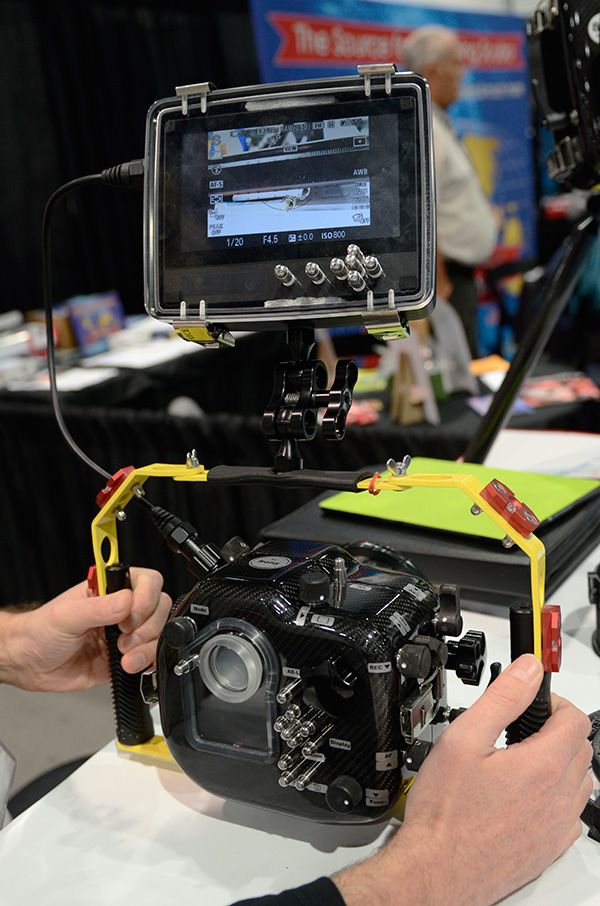 BS Kinetics is coming out with a separate 7-inch monitor to help view the 4K footage and focus peaking. It is expected to be available sometime in early 2015 for approximately $850.

Finally, BS Kinetics is also offering a tripod that can accommodate all of the company’s housings. Attachment is either with clamps or via a standard ¼-inch thread. 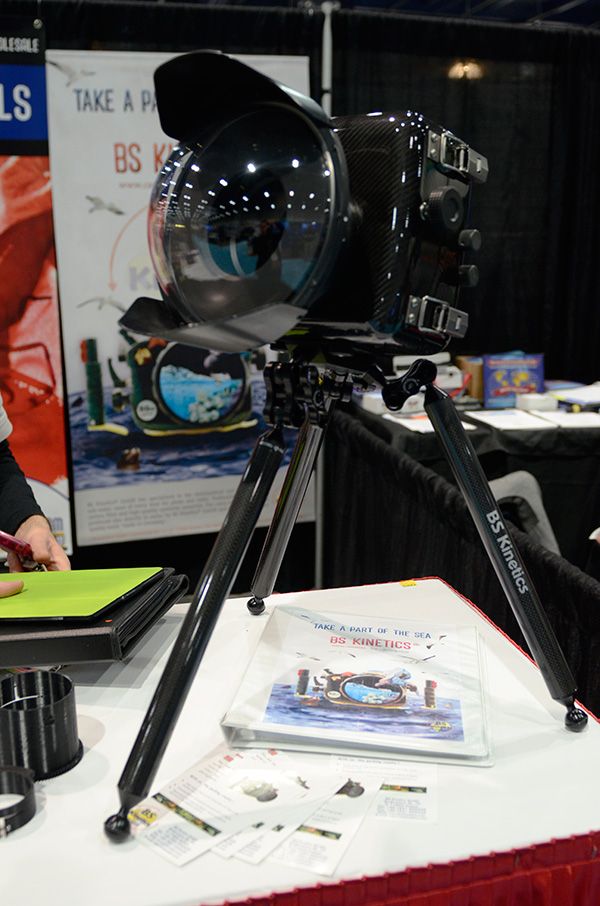 The BS Kinetic tripod modeled under their housing for the Sony A7.

Vivid Pix has been around for several years and offers simple editing solutions for underwater photographers who don’t want to spend hours (or days) in Photoshop. At this year’s DEMA, they’re debuting a one-click improvement software that focuses on brightness, color balance, contrast and sharpening. 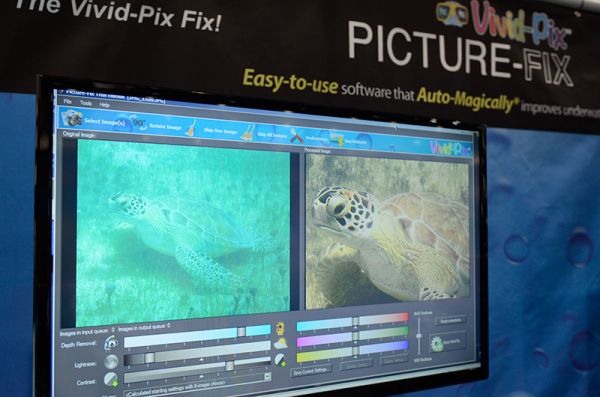 Vivid Pix is offering a 30-day full-function trial for anyone who wants to give it a go. The results are pretty impressive.

You may never have heard of Sexton underwater photography products, but they’re worth checking out. Basically, the company can manufacture a housing for almost anything—from 1,000-meter-rated GoPro housings to clear-water boxes for low-visibility science diving. 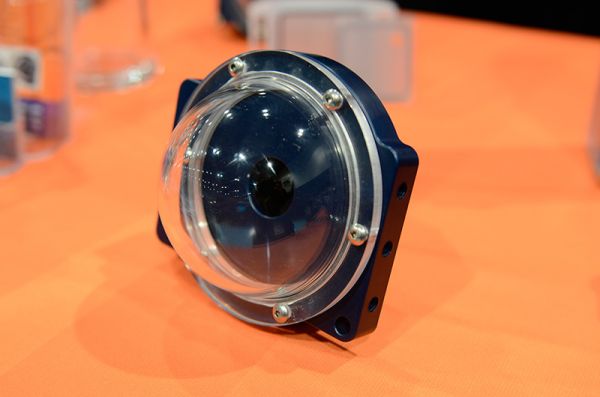 This GoPro housing is depth-rated to more than 3,000 feet. 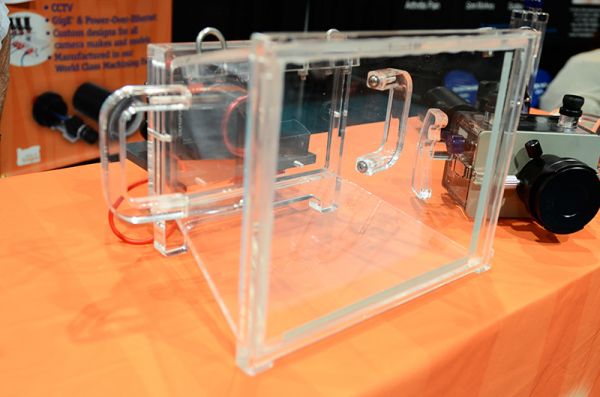 This custom-made housing actually uses pure water to create a buffer from the camera lens and the subject to reduce backscatter in zero-visibility conditions.

Ultramax has introduced a 15-megapixel, entry-level complete camera setup. It’s depth-rated to 200 feet, provides access to all of the camera’s functions, and features strobe connectivity to standard Sea and Sea or Inon strobes. 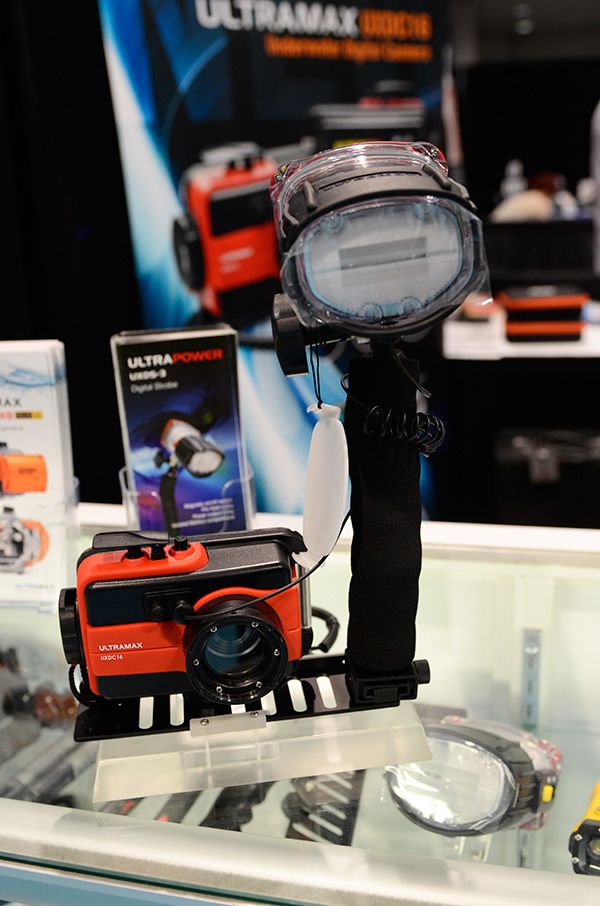 The complete package—housing, camera, tray, strobe, and arm—retails for around $560.

10 Bar has too many housings to list, or even count. They specialize in customization, so if you have a camera, they can probably make the housing for it.

We got a close-up look at some of their coolest new accessories. 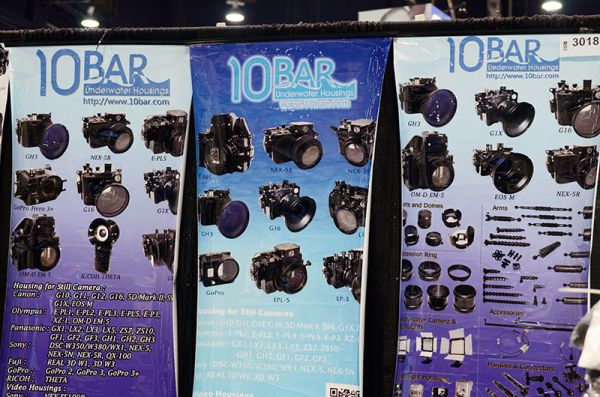 The mass of housings offered by 10 Bar. 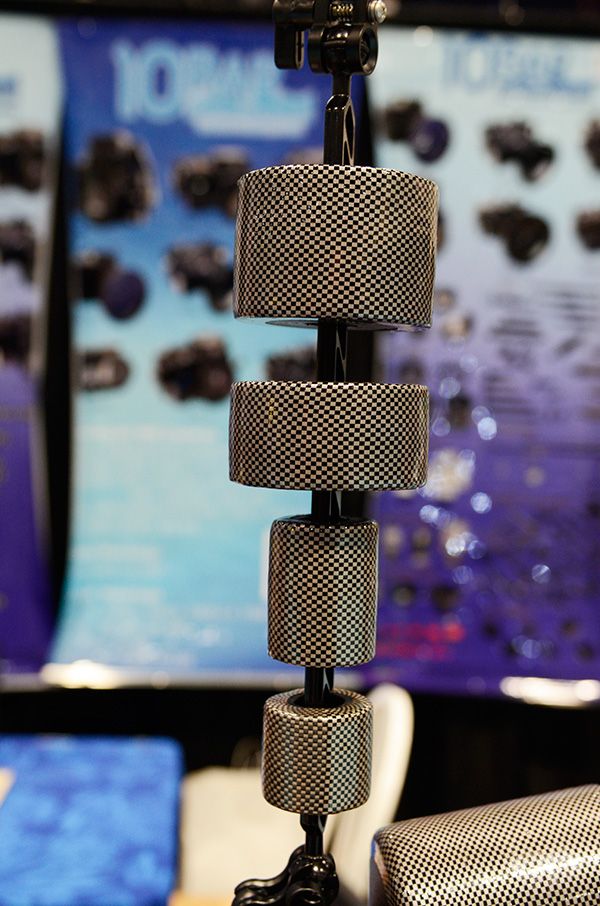 10 Bar is offering new floats that fit around most popular arm brands and provide up to ½ lb of lift. 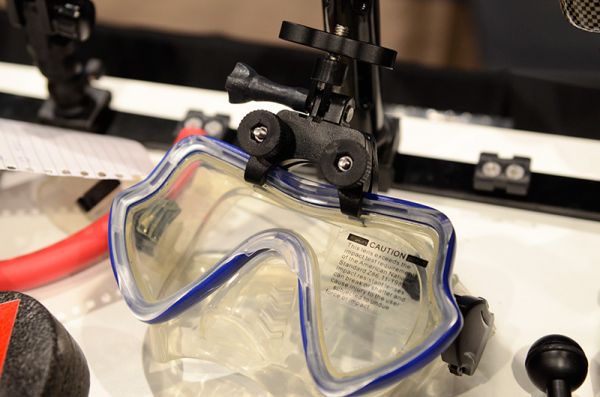 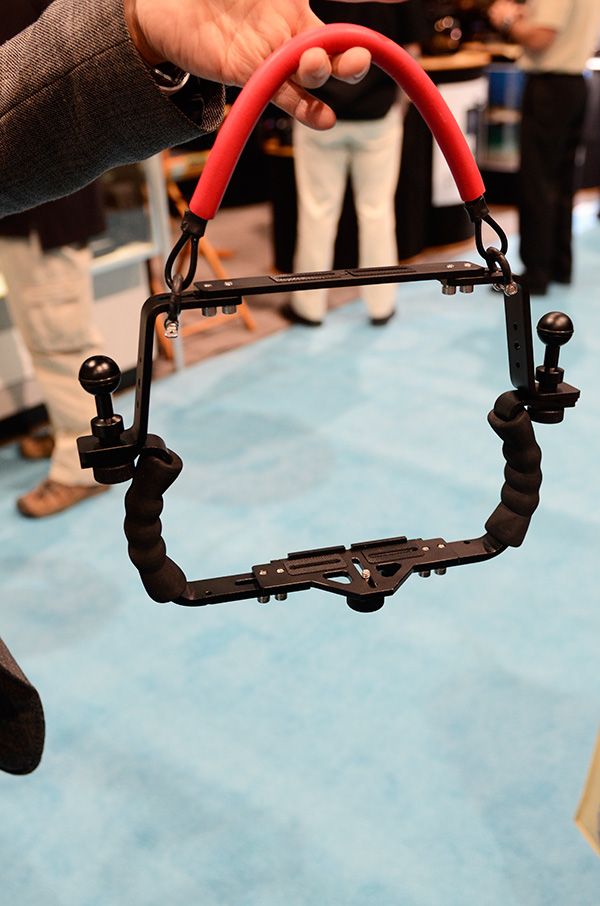 This two-level tray allows you to mount two different cameras with the same light sources (for example, a DSLR on the bottom and GoPro on the top).

SeaShell makes affordable housings for compact cameras, but has recently become known for their iPhone and Samsung Galaxy housings. Good news for you SeaShell fans: They’ll soon be releasing a housing for the new iPhone 6. 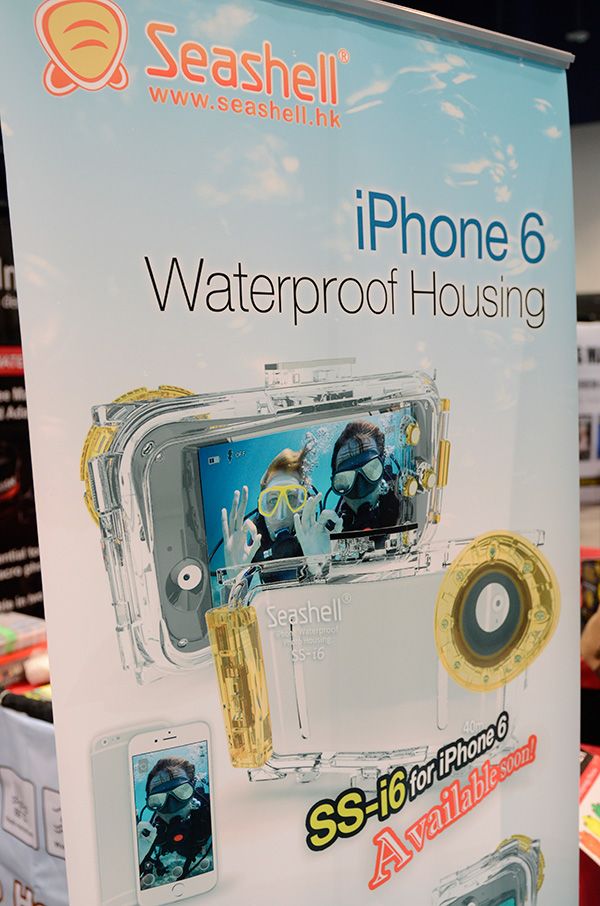 Ever wanted to relive your best underwater moments as if you’re seeing them through your very own eyes? That’s the idea behind Octomask—a dive mask with a built-in GoPro mount on top. 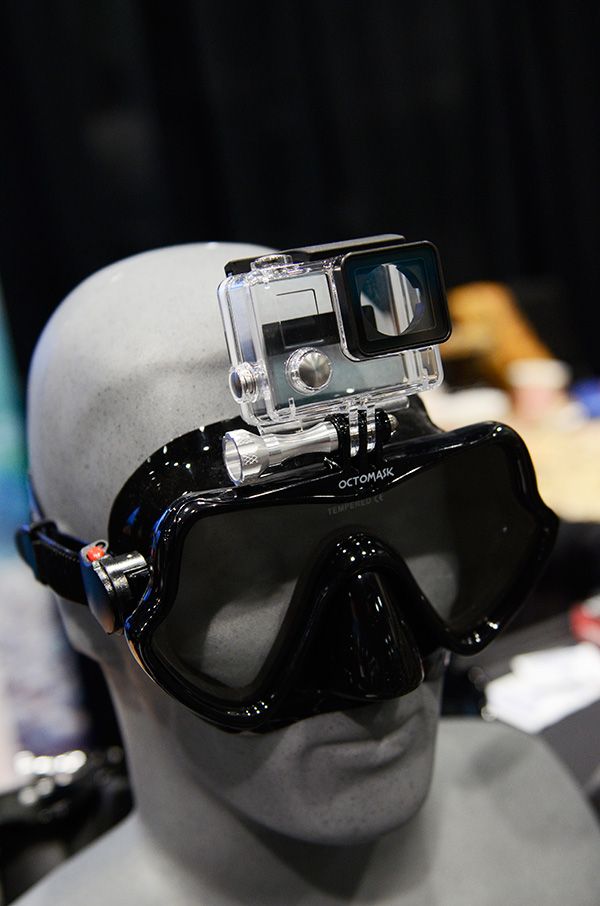 The Octomask retails for $79.99 and comes in black or clear skirts.