Without wasting a single second, DPG hit the DEMA Show floor to check out the latest gear in the underwater imaging industry. Day 1’s coverage features a broad array of new equipment—from GoPro accessories to professional lighting and everything in-between. Check it out:

Acquapazza is arguably the most colorful underwater housing booth, literally. Want your housing in “Kawasaki Green”? No problem. They have more than a dozen color options. But let’s talk new housings. 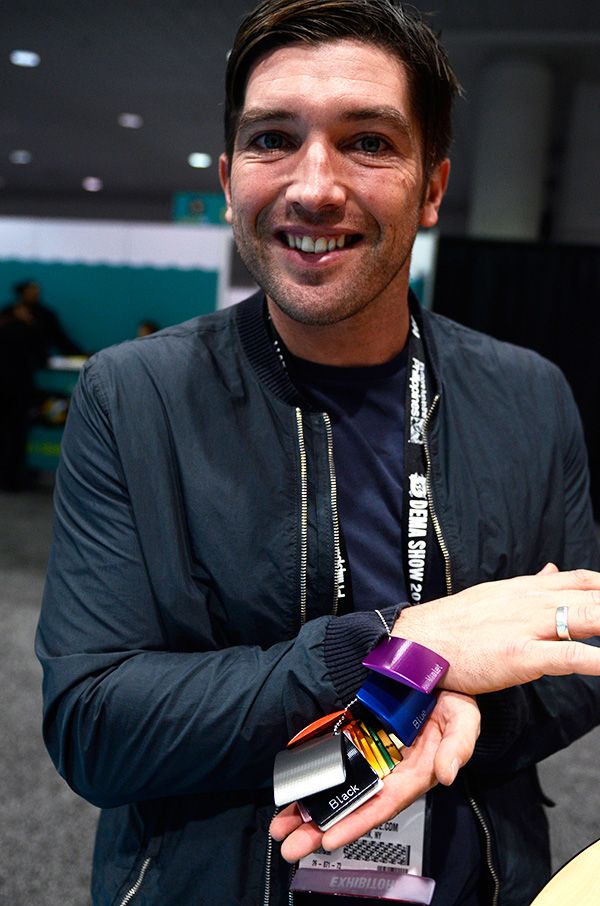 Dan Norwood models all the color variety offered by Acquapazza.

Prominently featured at the Acquapazza booth is their new housing for the Sony RX100 III ($885). Among the innovative features on this housing for the critically-acclaimed compact camera is the ability to both turn on and off the pop-up flash and the inclusion of a projection diffuser, which allows the use of the in-camera flash without creating a harsh shadow so often produced by the light hitting the housing port. 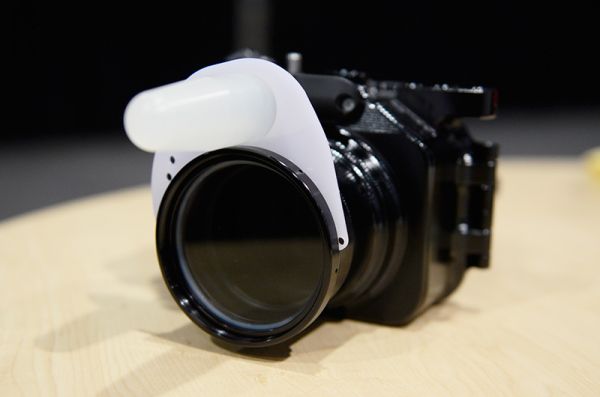 Notable on the RX100 III housing is the projection diffuser, which actually makes it possible to reasonably use the built-in flash for close-up photohtaphy.

What’s cool about Acquapazza (in addition to the 15 color options!) is their ability to identify more off-the-map cameras that might be successful for underwater use. One such example is the Sony Alpha A7, and Acquapazza’s accompanying APSO-A7 housing. Little details in the housing that are designed to improve ergonomics include slightly slanted control dials customized to how the hand normally grips the setup. Right now it’s only in prototype form, but expect more availability information in the coming months. 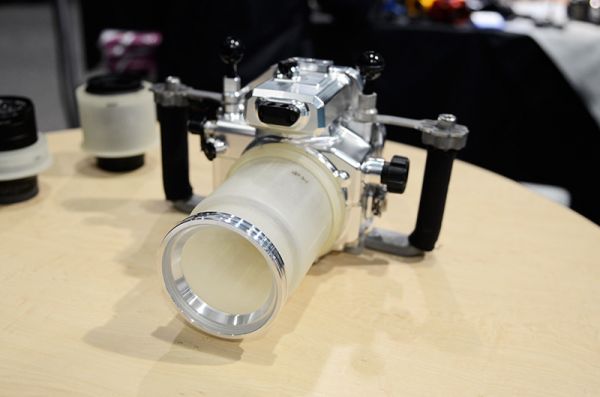 The prototype housing and ports for the Sony Alpha A7, which are designed to accommodate a wide variety of Sigma lenses, such as the 150mm (as shown above), which is popular for macro photography.

It may seam surprising that an equipment manufacturer specializing in arms and trays has a lot of new gear to show off at DEMA, but the team at Beneath the Surface always seems to be coming up with something innovative.

Add a little bit of lift to your heavy rig with BtS’s new Buoyancy Floats, which come in both ¾-inch and ½-inch arm varieties and range in price from $15 to $59. 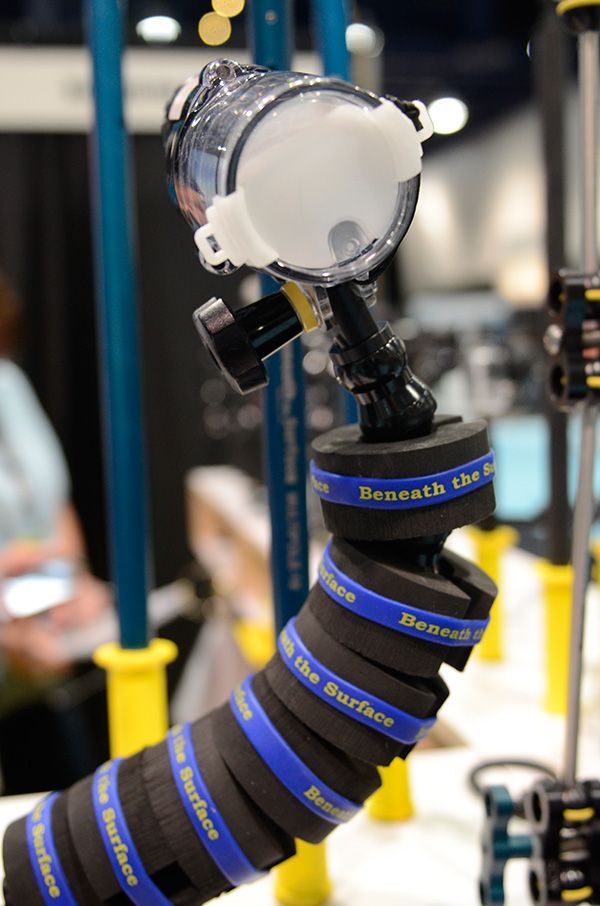 The latest trend in GoPro trays—and there are a lot of them this year—is the boomerang shape. BtS’s Boomerang Tray ($199) moves the mounting points for the lights back behind the camera, helping to eliminate the risk of flare or fingers making their way into your wide-angle shots. 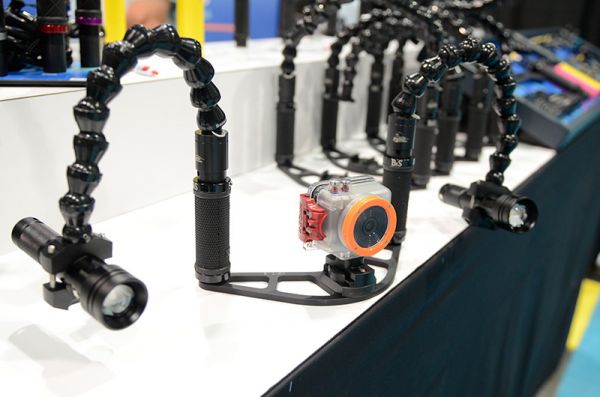 No more flare from your video lights or getting your index finger in the shot, thanks to the design of BtS’s Boomerang Tray.

GoPro users looking for a simpler, entry-level solution should take note of BTS’s Surf Stick ($29.95), which is a nearly indestructible pole that helps grip the camera and better stabilize footage.

The Surf Stick is a great entry-level option for a GoPro user not interested in investing in a tray-and-arms setup. 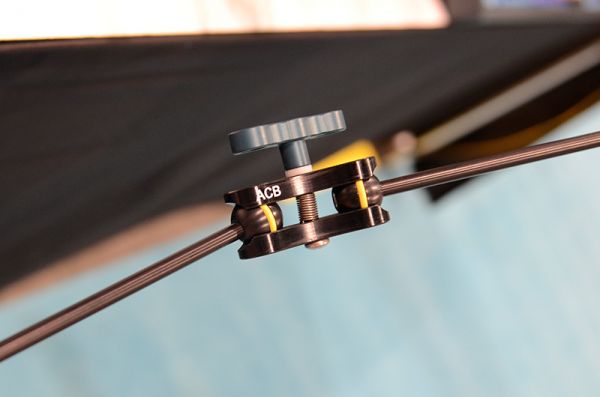 Black is cooler, let’s face it. That’s why all of BtS’s lightweight arms now come in black solid aluminum.

If you’re looking to pack up a significant amount of kit for your GoPro setup, BTS’s GoPro travel bag might just be the right solution to keep your gear safe. The kit arrives uncut, but with stencils and a knife so that you can customize your travel case. 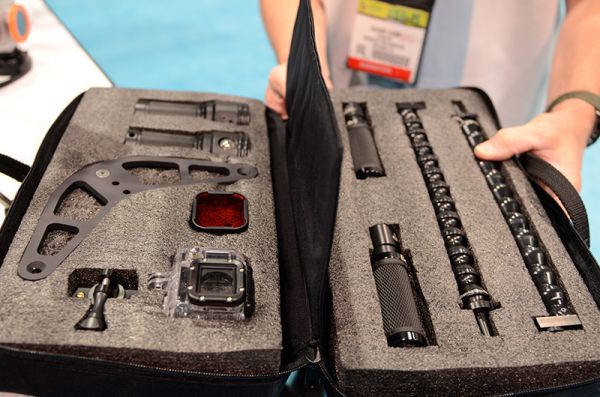 The ability to customize the layout for all your GoPro gear and accessories is bound to make packing and unpacking a lot less stressful.

At the Bersub booth, we caught a glimpse of their top video light, the Focus series. All Focus video/photo lights feature both spot and beam LEDs, which can produce up to 2,400 lumens. 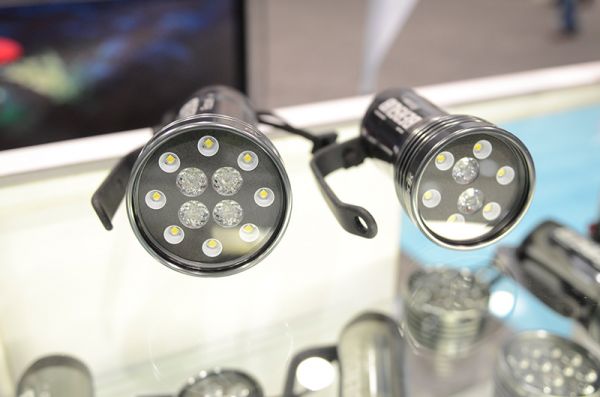 Keldan’s video lights are hard to miss. Ok, they are the next booth over from us—but it’s also because of their signature dome port on the front. The shape of the port helps soften the edges of the beam. At this show, Keldan is showing off both pro-level modular video lights and more-compact mid-level options. 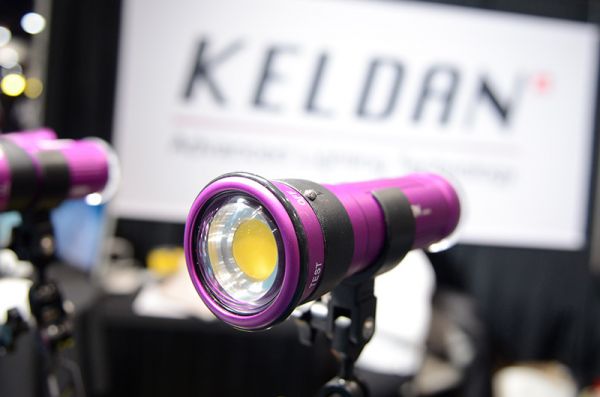 As it seems is an annual occurrence, Keldan is offering modules with stronger LEDs with a better coloring rendering index offering better coverage of the color spectrum. 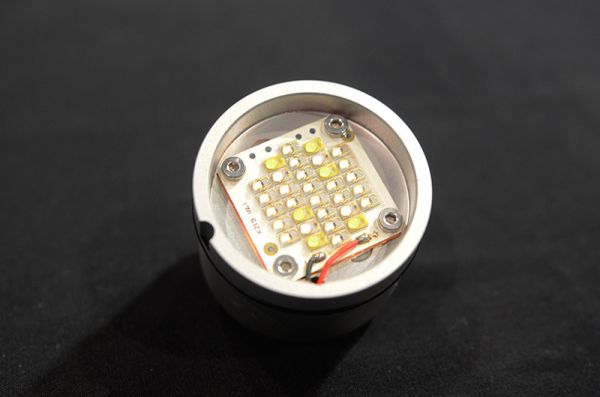 If you want to put your phone or tablet in the water, this is the booth you’ll want to pay attention to. Having produced iPhone housings for several years, Watershot unveiled a new dome port for your mobile split shots, featuring a 165-degree field of view ($189). 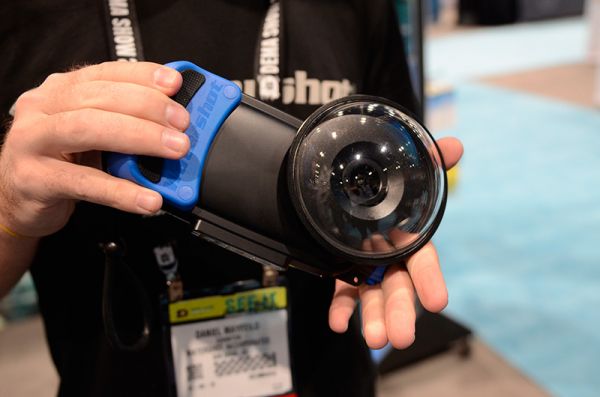 Watershot also added a less-expensive option in the form of a Splash Housing ($109), which provides access to touch screen functions underwater and is sealed conveniently with a turning “clam latch.” 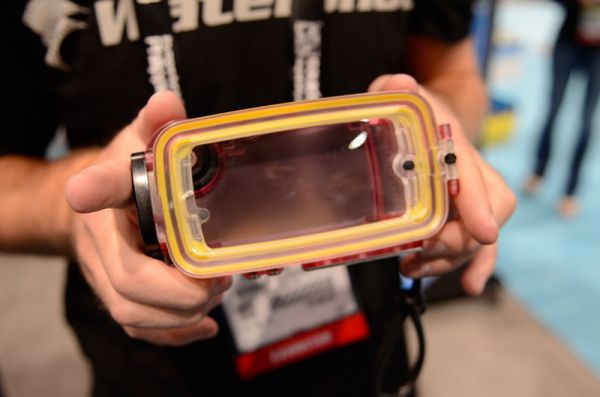 The simpler design and lower price point of the Splash Housing will appeal to the casual iPhone underwater photographer and waterman. 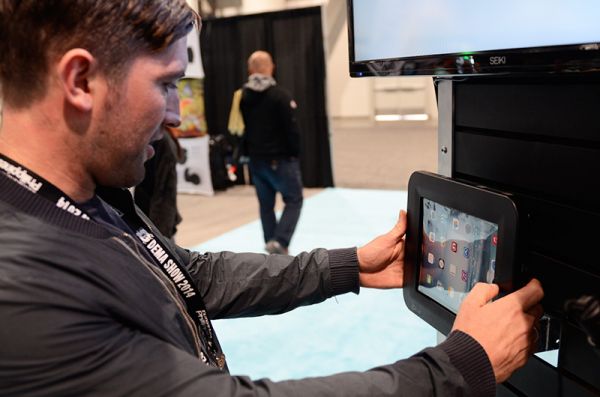 Dan wants to play with an iPad underwater—but the housing is mainly used for research and science diving.

The big news at the Recsea booth is the announcement of a divergent line of compact housings made from a polycarbonate, machined material. The CW-line features polycarbonate alternatives for several popular compact housings (Canon PowerShot G7 X and Sony RX100 III), providing a more economic, entry-level option. The housings allow access to essential camera functions while the low price point is more attractive to new enthusiasts. 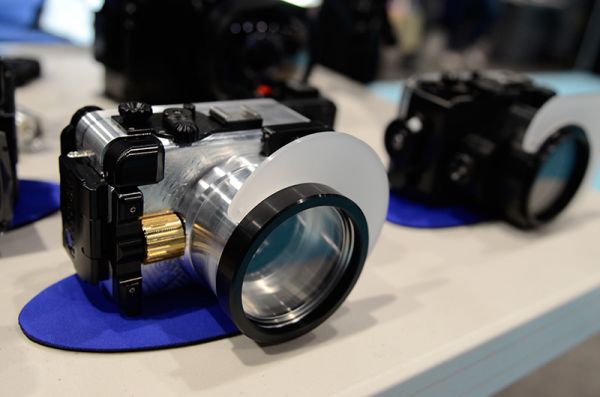 The difference in price between the machined aluminum and polycarbonate housings is significant: $1100 vs. $550 for the Recsea housings, respectively. 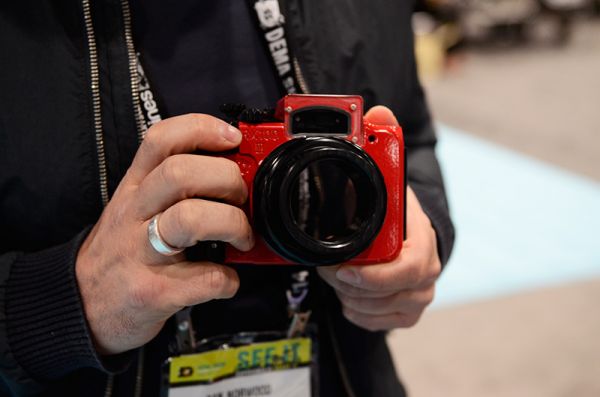 In addition to the polycarbonate line, Recsea is working on a canister-style housing for the Sony AX100 and CX900 camcorders. Although only in prototype form, the setup also featured a preliminary monitor that runs off AA batteries, is depth-rated to 330 feet, and can be connected to the camera with HDMI via Backscatter’s Wahoo.

Fisheye’s Fix NEO is a new modular light designed specifically for photo and video use. It’s a modular system with a variety of LED options, from the basic flood/spot to blue light for fluorescent photography. 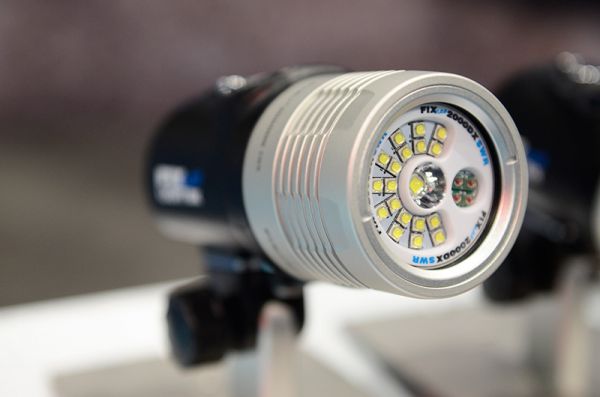 As a modular system, it’s easy to switch out different spot and flood combinations, as well as filtered light for fluorescent photography.

There are a lot of nice features in the light that stand out, like a sweet charging system that allows for exterior charge, while also offering the ability to pre-charge and interchange batteries. The flagship LED module features flood, spot and red modes. Different combinations of the Fix NEO range between $249 and $899. 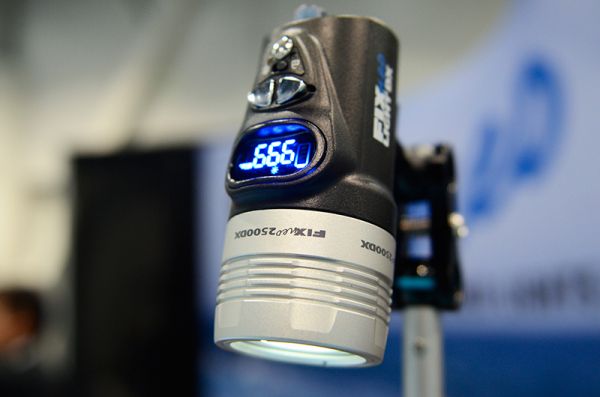 The digital display is a nice feature to have when you need to keep track of your video light’s battery levels.

Awesome accessory alert: The FR1 Remote Control unit. The remote control connects to the Fix NEOs and can control them in increments as large as 25 percent, and as specific as 1 percent. Talk about control. 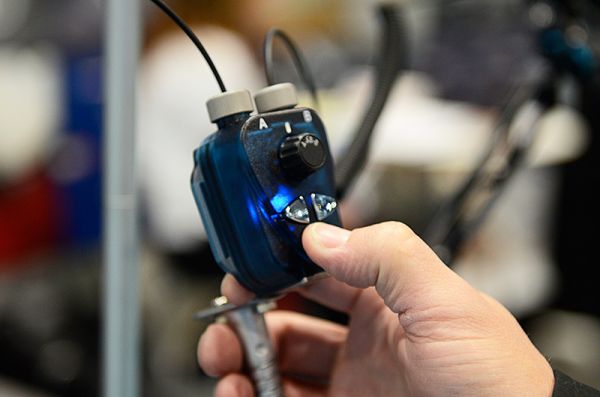 Demonstrating the control of the FR1 Remote Control unit on a pair of Fix NEO lights.

Light and Motion had perhaps the largest number of new products out of our first day’s coverage—with a completely new and improved line of video lights. The new Sola 3000 ($799) is vying for the title of the most powerful compact light on the market, with a 90-degree underwater beam angle and 90-minute burn time at full power. 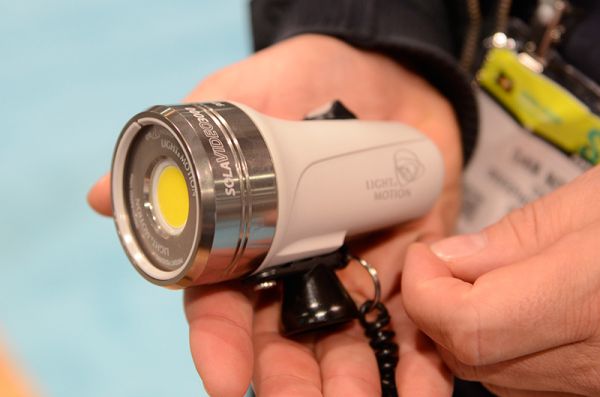 Light and Motion claims to have created the most powerful compact light on the market with the 3,000-lumen Sola 3000.

An awesome new feature across Light and Motion’s new video lights is improved charging time. You can now charge your Sola from 0–100 percent in just under two hours. Pressed for time between dives? The Solas will charge to 80 percent of their power in just 50 minutes.

The new Sola 2100 ($799) features a 2,100-lumen spot with a tighter 60-degree beam angle that is designed to be an alternative to strobes when it comes to lighting macro subjects.

The narrow spot feature of the Sola 2100 can replace strobe lighting when lighting macro critters.

The Sola Video Pro is an 8,000-lumen, pro-level video light with a 90-degree beam angle and a nifty visual display that keeps track of remaining burn time. Light and Motion even rolled out a new patent on this light, called “direct cooling technology,” which allows water to flow behind the LED module to keep it and the battery compartment cooler. 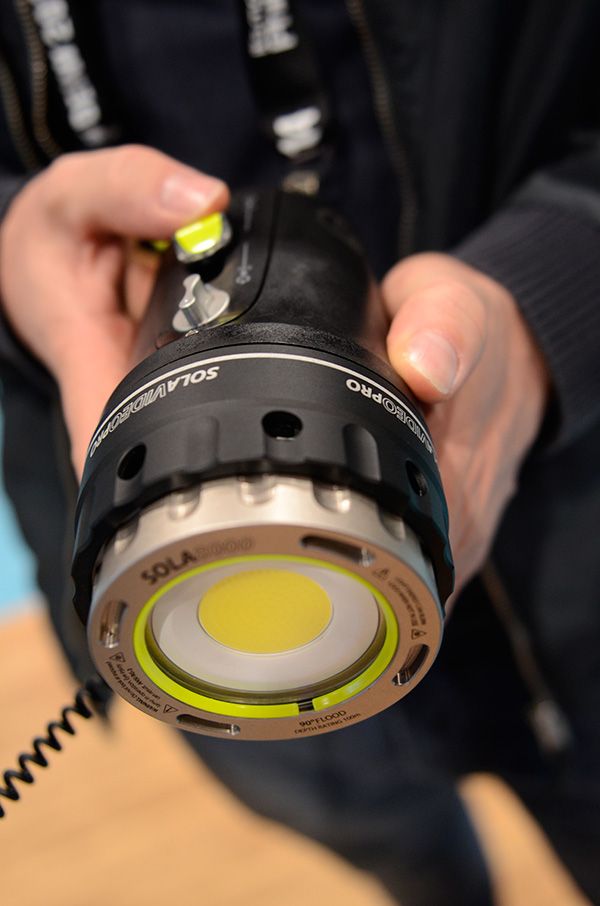 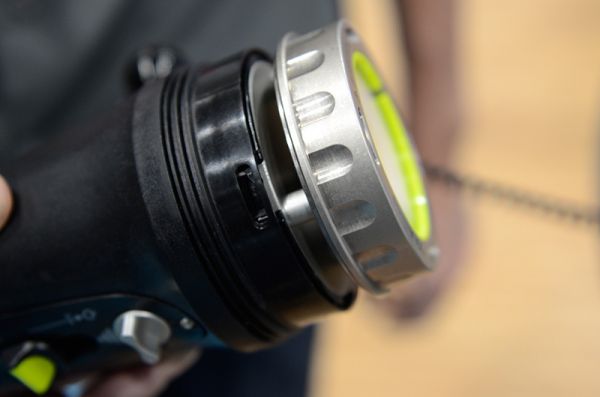 It might look small, but that space between the LEDs and battery compartment keeps the system cooler and allows it to charge faster.

Looking for something a little less strong for your GoPro? You should check out the Sidekick, a 600-lumen spot/flood video light that attaches right onto the standard GoPro mount. It comes with an external USB charger and can even function topside. 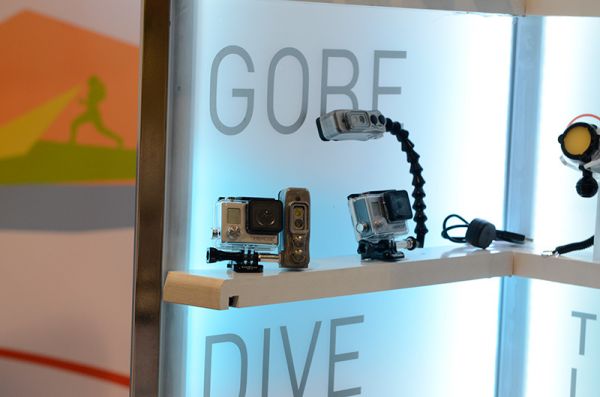 Perhaps the coolest part of the Sidekick is the external USB charger, making it a great on-the-go light source for entry-level GoPro users.

If you saw a green laser bouncing across the walls at the DEMA show today, it was us playing with the new Sola Laser 600. Designed for scientific and tech diving, the tight spot light also features an optional laser pointer for making communication easier (and a lot more awesome). It’s expected to ship beginning December. 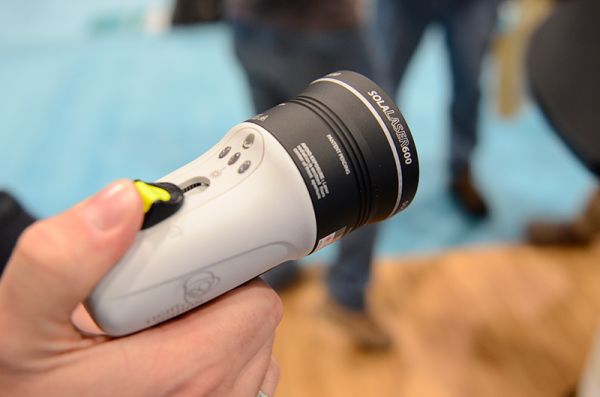 Seriously, DEMA has lasers. Not sure we can top that. Although not a dedicated photo light, it’s hard to pass up the opportunity to play with this light—designed mainly for scientific diving.

One of the coolest hands-on experiences at DEMA is the chance to get to hold the latest top-of-the-line DSLRs at the Canon booth. As one of the few camera manufacturers at the show, it’s a nice opportunity to get a feel for the latest cameras: the EOS 7D Mk II and EOS 5D Mk III. 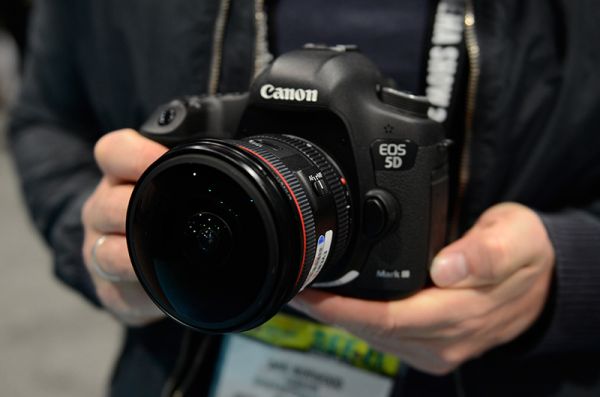 The EOS 5D Mk III in action: The deep grip makes holding the camera comfortable even with one hand.

Even as Nikon users, we were especially impressed with the solid build and apparent durability of these prosumer Canon DSLRs (even if it took our Nikon brains a couple seconds to find the on/off switch). If you’re in the market for these, or any new Canon DSLR, it’s worth a stop at their booth to get a feel for how the camera feels in your hand. Over the next few days of coverage, expect to see some housings for these new models. 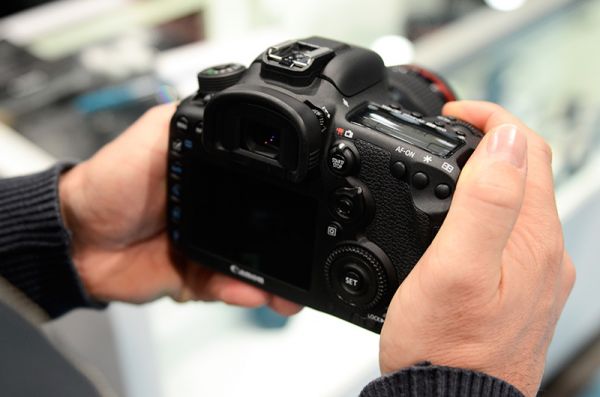 A photographer’s-eye view of the back controls on the new Canon EOS 7D Mk II DSLR.

Recognized for specializing in photo and video accessories, XIT 404 had on display a new “Dive and Sea” cover designed to reduce the glare on housed monitors. 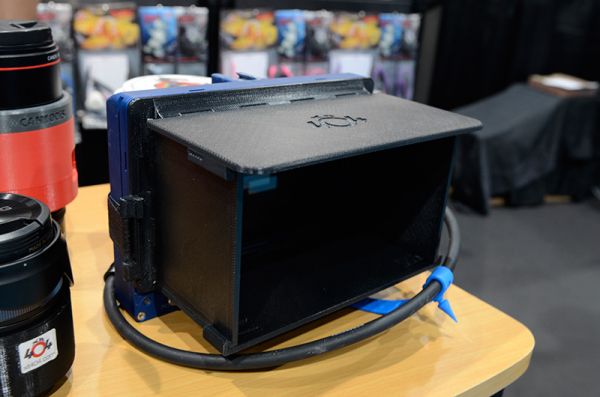 Removing as much glare as possible is critical when reviewing footage in shallow, sun-drenched conditions. 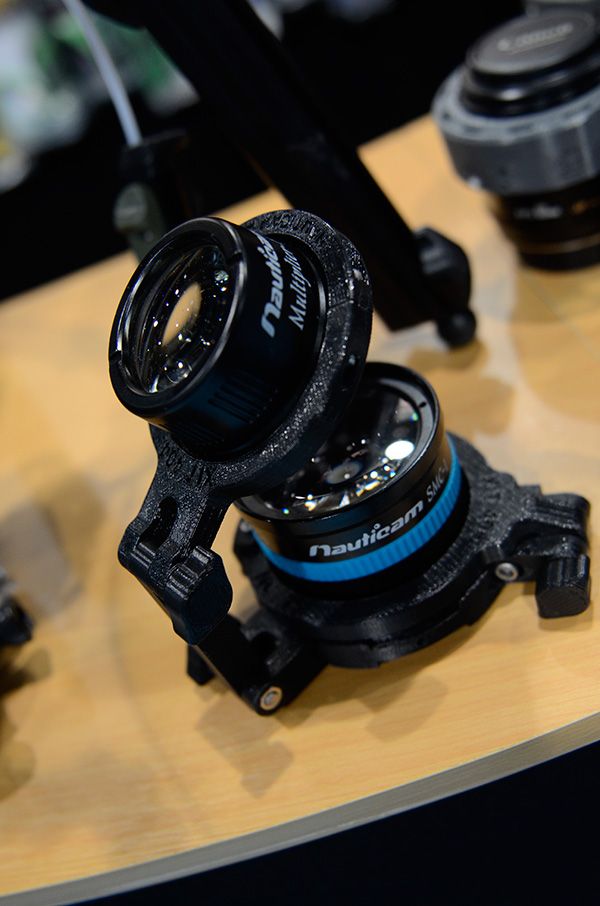 That’s it for our coverage of an awesome first day at DEMA Show. Keep an eye out for loads more coverage from the show floor. And don’t forget the biggest party event in Vegas tomorrow night: the DPG/Wetpixel Underwater Imaging Cocktail Party!