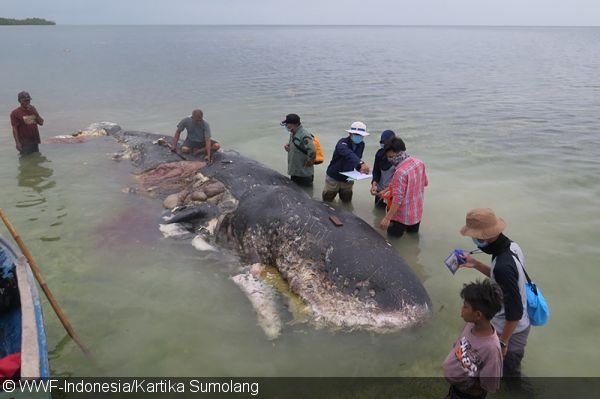 The stomach of a whale isn’t pretty, but what Indonesian officials found inside a dead whale that washed ashore on November 19th was gross for a different reason. The contents included almost 13lbs of plastic waste: 115 drinking cups, 25 plastic bags, four plastic bottles, and two flip-flops. The carcass of the 31-foot mammal was found near Kapota Island in the Wakatobi archipelago, a marine national park in Southeast Sulawesi well-known among divers.

Dwi Suprapti, a marine species conservation co-ordinator at WWF Indonesia, told the Associated Press: “Although we have not been able to deduce the cause of death, the facts that we see are truly awful.” WWF Indonesia tweeted the breakdown of what was found inside the whale: “Hard plastic (19 pieces, 140g), plastic bottles (4 pieces, 150g), plastic bags (25 pieces, 260g), flip-flops (2 pieces, 270g), pieces of string (3.26kg) & plastic cups (115 pieces, 750g).”