Thousands visited the Festival through the Ocean Park; more than two thousand entries from children as far as Israel and all over Asia competed for the ‘Say No to Shark Fins’ Art 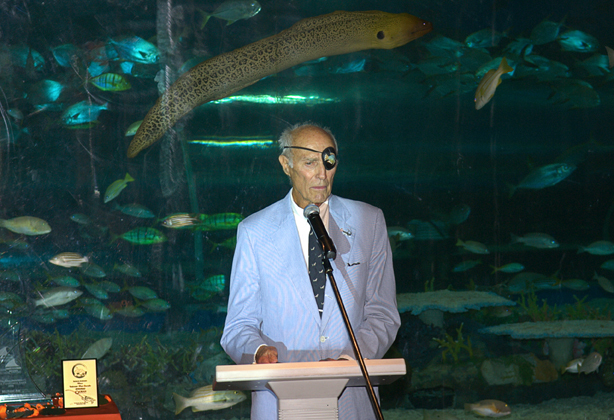 competition and as well as thousands of novice and professional image makers from 38 countries vied for the top underwater photographic and film awards.  Luminaries of the ocean graced the event and shared their experience through keynote addresses and forums. Stan Waterman, a 5 times Emmy Award winner, was named the Honorary President of the Festival and conferred the Hero of the Sea title at the Festival; Ralph White was also conferred as  Hero of the Sea   posthumously, and his plaque was received for his family by his best friend in deep ocean exploration, Emory Kristof.  Frederic Buyle, a five times world champion and record holder performed live at the gala dinner, winning the admiration of the audience as he gracefully interacted with the fish at the oceanarium. The award ceremony with a dynamic and ‘live’ panoramic backdrop of swimming fishes not only made the venue an apt one, but a unique and exhilarating experience. 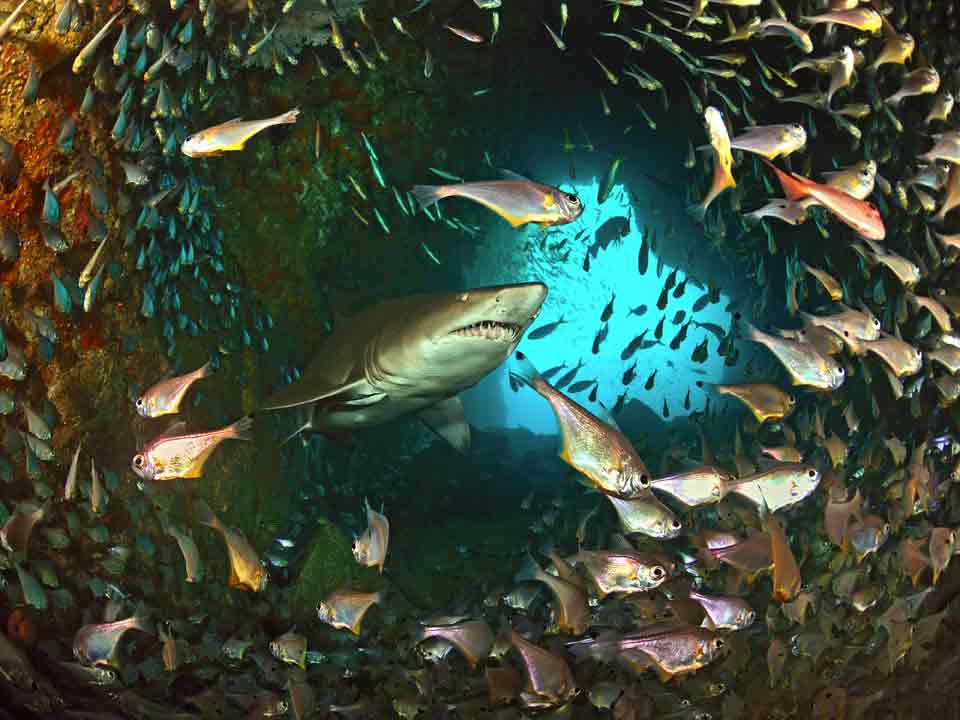 The keynote addresses, presentations and participation at the forums filled the room with an eager audience thrilled to be in the presence of both local and visiting experts sharing their views and knowledge. The Shark Theatre showing filmlets and movies of contestants and the luminaries was more often than not, filled to capacity. At the Awards Ceremony and Gala Dinner which was held on the 2nd Saturday of June, La Aquatique, introduced a line of haute couture creations by Singaporean designer, Jeremy Wee who was inspired by the creatures of the ocean captured in Mikael Jigmo’s portfolio and modeled by Miss Philippines Fire, Eco Tourism and PAGOR.

Although Her Excellency Gloria Arroyo was unable to attend the Gala Dinner and Awards ceremony, Under Secretary, Department of Tourism, Cynthia Carrion received a special recognition entitled, the ‘Heart of the Ocean’ on her behalf from Michael Aw, the founder of this Festival. As president of the Shark Research Institute Princeton, Stan Waterman presented the SRI Peter Benchley Shark Conservation award to Her Excellency President Gloria Arroyo and as well to Michael AW, director of Ocean Geographic. 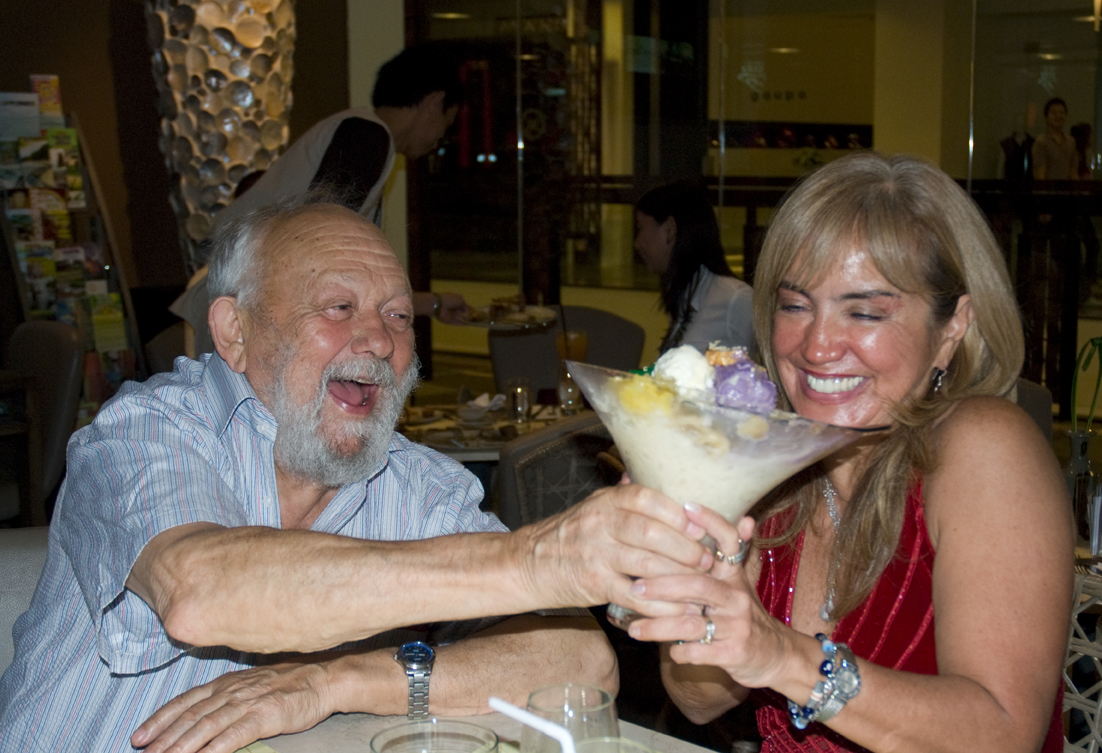 The international presence of Stan Waterman, Emory Kristoff, Daniel Mercier, the founder of the World Underwater Imagery Competition in Antibes, Leandro Blanco, Frederic Buyle, Lynn Funkhouser, Mathieu Meur and the local expertise from Prof Filemon Romeiro, Dr, Porfirio Alino, Dr. Fernando Siringan, Ferdie Marcelo, Scott Tuason and the General Manager of the Singapore Environment Council, Yatin Premchand, affirmed the purpose and success of this Festival in a grand way. Ultimately, the attendance and presence of the visitors, foreign and local with the exhibitors and sponsors for whom such a festival was organized, more than aptly endorsed Her Excellency’s proclamation.

A young lad from Pontianak, Kalimantan named Giffari M Zakawali who won the international art competition was conferred the title, Ambassador for Sharks, 2008. That he and his family traveled a bumpy 9 hour bus ride, transited at 2 airports, landed at Clarke Air Base and arrived at their hotel in Manila nearly 24 hours later, and will repeat this on their return journey, irrefutably manifests the worthiness and essence of this Festival. Thirty five children from Hong Kong, Indonesia and Malaysia made the journey to Manila to compete with 15 local kids in the final round of the Celebrate the Sea Art competition.  The proclamation and the Celebrate the Sea Festival have a symbiotic union that only enhances and furthers the cause exponentially. This year is but a first step. It has the potential to awaken a new celebrative dimension towards oceanic conservation, not only regionally, but globally.

What started as an imagery event has now grown to a multi-sensory experience and multi-facetted in its expression. Humble as it’s 7 years of success may be, all signs indicate growth and hope. Celebrate the Sea Festival is envisaged to not only prevail, but be a ‘awakening’ phenomenon working in harmony with willing hearts and hands rather than an elitist brand.  The Manila Ocean Park and it’s staff performed stupendously and rose to the proclamation in spirit and deed. Her Excellency’s proclamation is a clarion call that will not go unheeded; the Celebrate the Sea Festival is just one of the many elements ready to breathe life and meaning into this unprecedented and necessary proclamation.

The Celebrate the Sea Festival is a non-profit event funded and produced by OceanNEnvironment Australia and for 2008 the partner and principal sponsors are the Department of Tourism Philippines and PCSSD. From the first to the current Festival, Rolex has been supportive as a major sponsor. Supporting sponsors includes DHL, PADI, Minahasa Lagoon, Atlantis Resort, Asia Diver, Expedition Fleet, Splash Photography and Scuba Seraya.