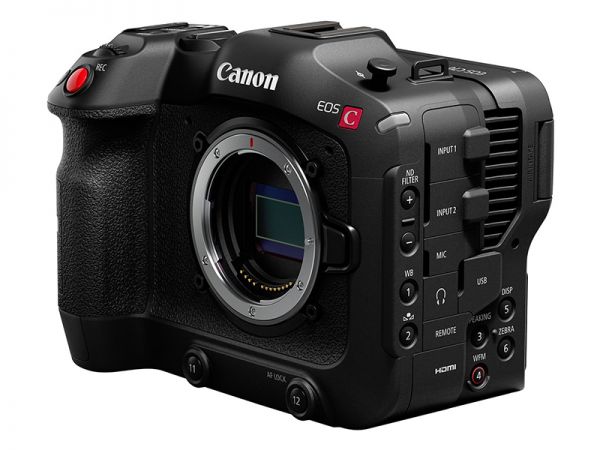 Serious video content creators are being increasingly drawn to mirrorless (and DSLR) cameras due to their form factor and relative affordability, and Canon has now responded by announcing a new digital cinema camera that resembles the EOS R5 more than the EOS C300 Mark III. Enter the EOS C70, complete with Canon’s new RF lens mount.

The C70 features the same Super 35 Dual Gain Output (DGO) CMOS sensor found in the C300 Mark III, which when paired with its DIGIC DV 7 image processor achieves a dynamic range in excess of 16 stops, according to Canon. The camera can record 4:2:2 10-bit 4K DCI/UHD at up to 120fps, as well as 4:2:2 10-bit Full HD at up to 180p, with Dual Pixel CMOS AF support. Concerns about overheating may be allayed by the inclusion of an active cooling system with a fan.

A variety of pro video features are on board, including a motorized 10-stop ND filter, Canon Log 2, Canon Log 3, PQ and HLG gamma for HDR, custom in-camera LUTs, and twin mini XLR mic inputs. There’s no RAW option, however, unlike the C300 Mark III. Canon has included a 3.5-inch 2.76M-dot rear LCD but left out an electronic viewfinder. The dual card slots support UHS-II SD cards, and the camera has the ability to record two different formats at once.

Alongside the C70, Canon has released the EF-EOS R 0.71x optical adapter, which makes it possible to use full-frame EF lenses with the Super 35 sensor, with the added bonus of increasing lens speed by one stop.

MELVILLE, N.Y., September 24, 2020 – Canon U.S.A., Inc., a leader in digital imaging solutions, is excited to announce the company's first-ever RF mount Cinema EOS camera, the EOS C70 4K Digital Cinema Camera. When the Canon RF mount was first introduced, imaging professionals began to dream about the possibilities that this revolutionary mount system might provide them. One request that Canon consistently heard was to put an RF mount on a Cinema EOS camera so that future lens performance could capitalize on the short flange depth. Just two short years later, those wishes have come true with the new C70 camera. 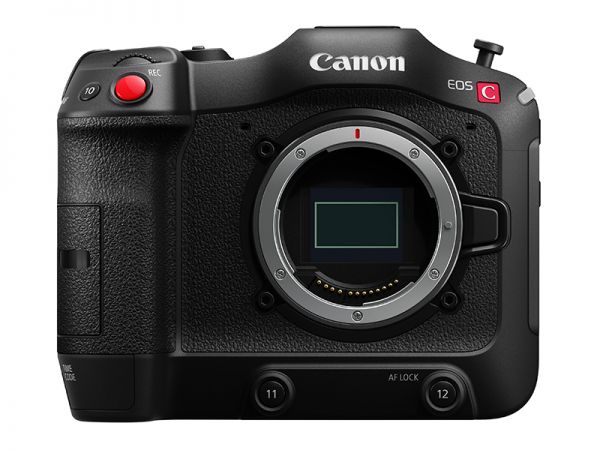 The unique design of the EOS C70 camera puts a significant emphasis on operational convenience for the end-user. The small form-factor, weighing only 2.6lbs., allows the camera to be easily handheld and dramatically enhances a videographer's mobility, providing a seamless bridge between the EOS and Cinema EOS families for cinematic applications. Cleverly designed, the camera features a slim, motorized ND filter unit – having a mere 6mm depth – that is built into the short flange back of the RF mount. The motorized 10-stop ND filter provides users with the flexibility to control exposure while keeping the desired depth-of-field and capturing images that feature the desired level of bokeh. Thirteen customizable buttons allow users to select from more than 80 functions to be assigned based on individual preferences.

"The Canon EOS C70 camera is truly a special tool that will undoubtedly satisfy and delight a variety of users on the search for a high-powered piece of video equipment," said Tatsuro "Tony" Kano, Executive Vice President and General Manager of Canon U.S.A.'s Imaging Technologies & Communications Group. "In today's fast-moving, ever-changing world of filmmaking and content creation, versatility is key, and the EOS C70 will provide a familiar form and feature set to our entire spectrum of imaging customers. We are eager to see how creatives use this tool and the projects that come from it." 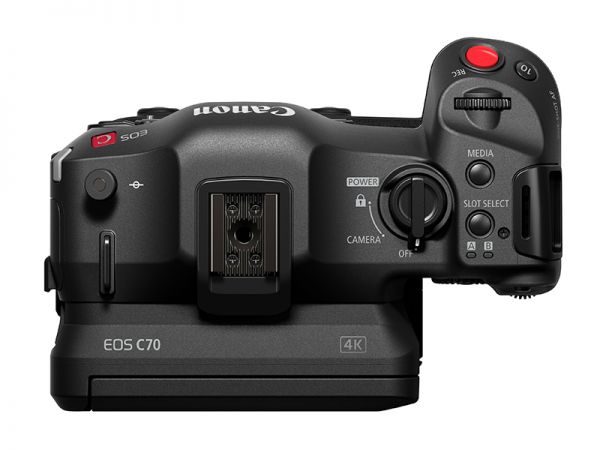 The camera features Canon's innovative and next-generation Super 35mm DGO Sensor that further extends the high dynamic range and lowers noise levels by reading out each photodiode with two different gains. One gain prioritizes saturation – protecting detail in highlight areas – while the other suppresses noise in the shadows. The result is an image with up to 16-plus stops of total dynamic range, clean, rich shadows, and vibrant highlights in up to 4K/ 60p or 2K/120p in Super16mm Crop mode. The EOS C70 camera also features Canon's recently developed DIGIC DV7 image processor that collects the extensive information captured from the DGO sensor and processes it into exceptional HDR imagery while offering choices between Canon Log 2 and 3, in addition to PQ and HLG gamma functionality. The C70 camera can also record 4K DCI or UHD up to 120fps and 2K DCI or HD up to 180 fps – with an important flexibility in the choice of codecs.

The camera supports XF-AVC format (in variable bit-rate) – both Intra and Long GOP with MXF file format. The intra-frame format compresses the data after analyzing each frame separately, while Long GOP format compresses data at a higher rate, creating an even smaller file size. A secondary choice is Long GOP 10-bit 4:2:2/4:2:0 MP4/HEVC (a next-generation HDR video recording compression standard) with an MP4 file format – a first in the Cinema EOS line.

The camera's independent air intake system is separated from the electrical systems to protect the sensor from water, sand, and dust. In addition, the camera also features two air outlet vents that allow uninterrupted recording for extended periods of time. 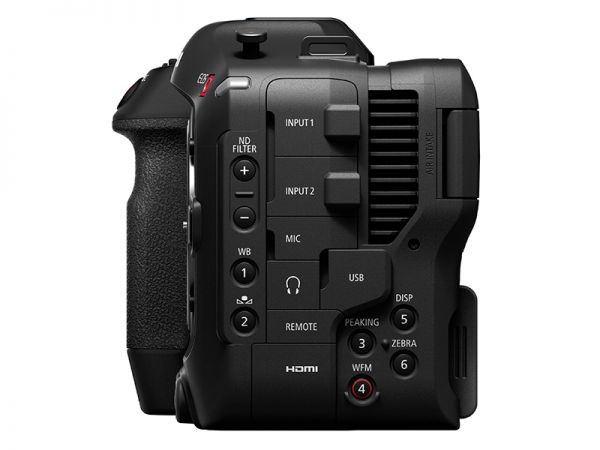 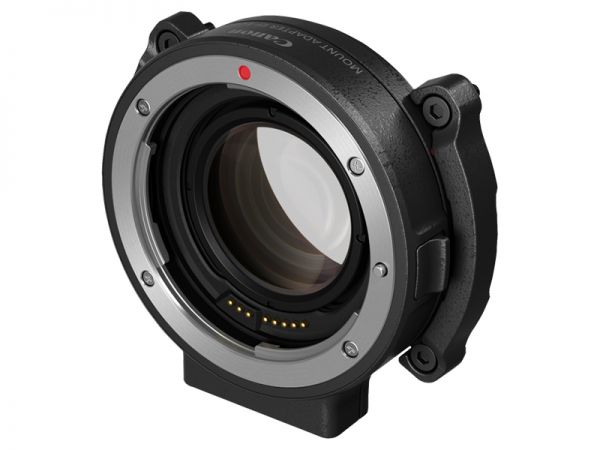 * Compatible EF lenses are EF16-35mm F2.8L III USM, EF24-70mm F2.8L II USM and EF24-105mm F4L IS II USM. As of September 24, 2020. Firmware update provided free of charge, compatibility will be added for additional EF lenses in the future. Even if you do not update the firmware, you can use the EF lens, but it is recommended to use the firmware update in order to effectively use the function linked with the camera. 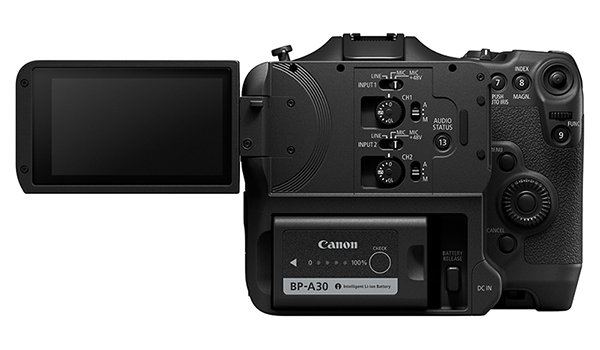