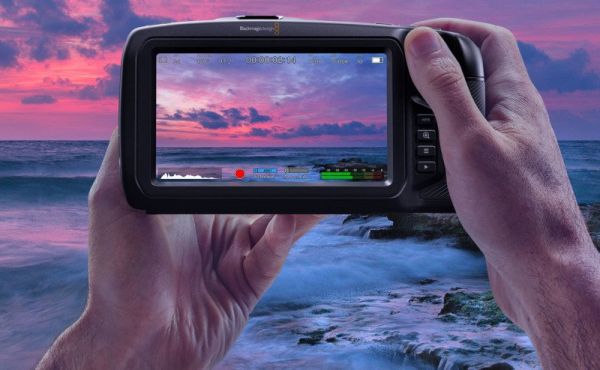 Released in April last year, Blackmagic’s Pocket Cinema Camera 4K has been updated with a new firmware release that brings faster and more-accurate autofocus, better battery life, and a new pixel remapping feature, among other enhancements.

According to Blackmagic, “The new pixel calibration feature allows the camera to realign the light output of each pixel resulting in a smooth clean image under changing environmental conditions.” In other words, this calibration tool allows users to recalibrate pixels in the camera to correct brightness variations that may occur over time.

Available for free for existing customers, the Blackmagic Cameras 6.1 firmware can be downloaded from Blackmagic Design's website.

The new Blackmagic Cameras 6.1 significantly improves audio recording when using the built in microphones on the Blackmagic Pocket Cinema Camera 4K. The new processing now analyzes incoming audio from the dual microphones on each side of the camera to dramatically lower the noise floor, resulting in quieter recordings than possible before. In addition, latency has been reduced for audio monitoring, audio and video synchronization has been fine tuned, and the 3.5mm audio input selection interface is now more intuitive, making it faster to use.

Blackmagic Cameras 6.1 also improves auto focus performance. Auto focus now responds quicker and more accurately so that lens hunting is greatly reduced when the camera is locking on to the focal point. There's also a new media formatting interface that helps prevent customers from accidentally formatting media cards. Once the camera is updated, customers will need to tap and hold the media format confirmation button for 3 seconds before a card will be erased and reformatted.

This update also includes a new in-camera calibration feature which allows customers to recalibrate pixels in the camera. Over time some pixels can change in brightness and create small variations across the sensor. The new pixel calibration feature allows the camera to realign the light output of each pixel resulting in a smooth clean image under changing environmental conditions. Blackmagic Camera 6.1 update also features 2:1 monitoring frame guides, which is another creative composition tool for filmmakers to frame shots. In addition, new power savings and efficiency enhancements improve battery runtime by 10-15% and give customers a more accurate indication of remaining battery power.

“The Blackmagic Pocket Cinema Camera 4K is an incredible success and it’s been very exciting watching the adoption of digital film workflows by a much wider range of people,” said Grant Petty, CEO, Blackmagic Design. “This update is exciting because it adds even more great new features to the camera and it’s an exciting way for us to say thank you to all the people who have purchased a Blackmagic Pocket Cinema Camera 4K and who have taken the time to discuss ideas for the future with us. We can’t wait to see what customers will produce next!”

Blackmagic Cameras 6.1 is available as a free download for all existing Blackmagic Pocket Cinema Camera 4K customers from www.blackmagicdesign.com/support.