Editor's Note: This is the final day in a series of coverage from this year's Beneath the Sea. You can also view the first and the second day's coverage.

Welcome back to DPG’s continued coverage of the Beneath the Sea dive expo in the Meadowlands Center, New Jersey. Yesterday, we were able to cover the majority of underwater photography equipment, but we have saved a few little goodies for today.

Today’s first equipment stop was the Mangrove booth, which featured several new lighting products as well as their latest housing. One of their displayed lights was the VC-4C6 Light –priced at around $800- with a total output of 4300 lumens. The light features two output levels, the maximum 4300 lumens that has a burn time of 50 minutes and the 60%, which has an increased burn time of 320 minutes. 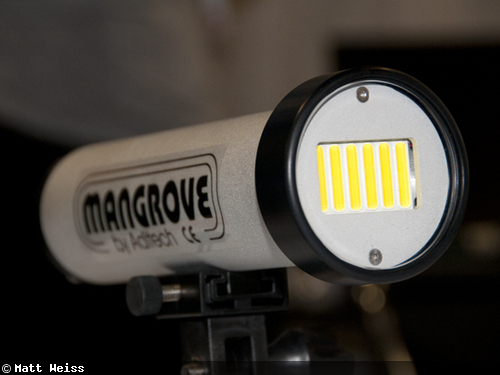 The lithium manganese battery is safer than the lith-neon predecessor in the event of a flood.

The VC-4C6 light is available as an individual model or as part of a video system with external battery pack that has two outputs. Speaking of video, Magrove’s new housing for the Sony XR/CX series also made an appearance at the show. 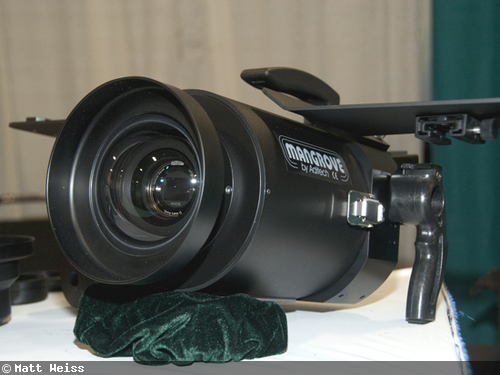 Improvements to this new housing include a port customized for the wide-angle lenses offered for the Sony camcorders. 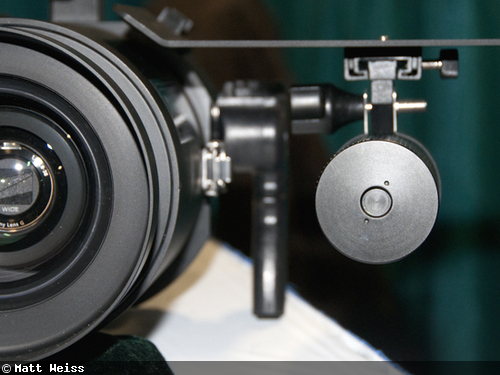 They also offer an optional buoyancy compensation device to be attached under each of the stabilizing wings, which can be adjusted at a pivot point for maximum control.

While also in the lighting mood (not to be confused with mood lighting), I stepped over to Light and Motion for a moment to take a look at some of the latest Sola focus lights, including the new Sola 1200 dive light. Although not specifically designed as a focus or video light, the 1200 boasts a 70 min. burn time at 1200 lumens. 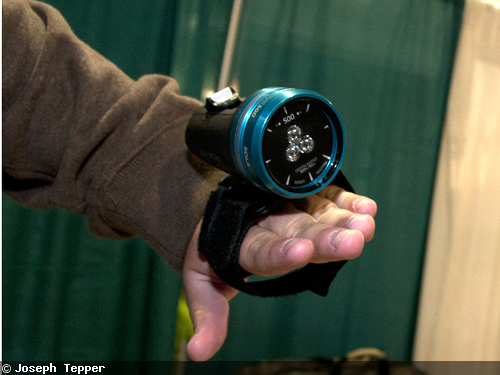 The last equipment stop for the weekend was not actually a stop as much as a quick walk across the aisle from the DPG booth to the latest tray/arm manufacturers on the market- Beneath the Surface. Although this new company produces tray and arm combinations for setups from compacts to SLRS, they are perhaps most unique in the “bridge bar” which connects the two handles, allowing for easy handling between diver and boat.

Because all of the equipment set ups offered by Beneath the Surface are modular, the format can be custom designed with the T6 aircraft quality aluminum to fit the needs of any shutter bug. 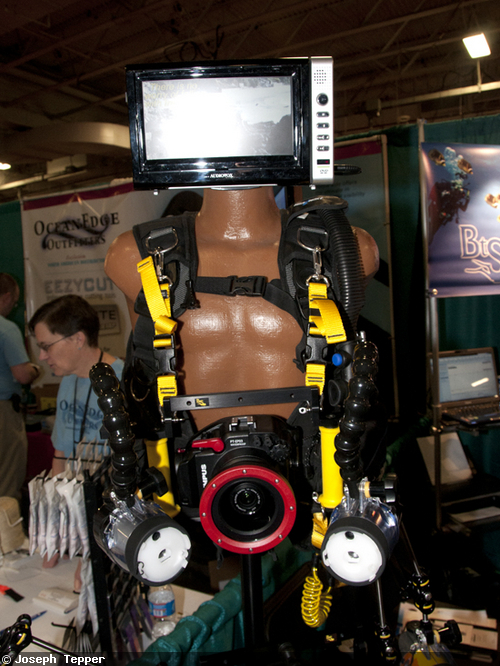 With so many customization options, this model seems to be showing off the quintessential setup that Beneath the Surface has to offer. 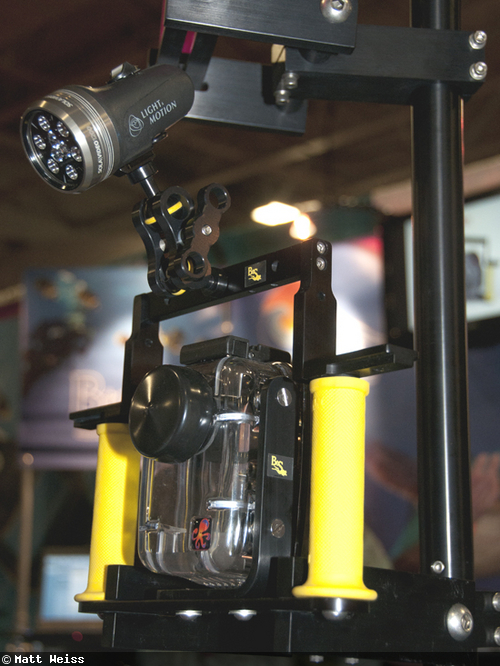 From DSLRs to compacts, and even small video housings, the tray/arm combinations offered by this new company fit most housings on the market (excluding some of the bigger-sized SLR housings like Subal, Aquatica, an Sea and Sea, which the company is already working on). 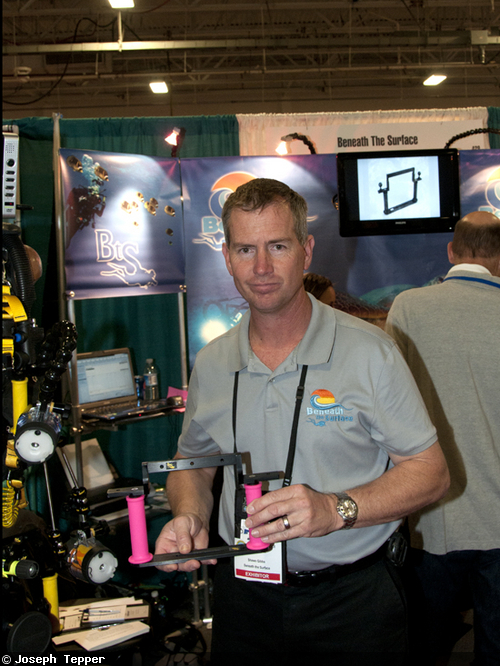 Our booth neighbors across the street.
While that is all of the new equipment shown of at Beneath the Sea, it was by no means the end of the action! Here are some of the other highlights of the show including the film show on Saturday evening, celebrity sightings, and some of the other best booths at the show! 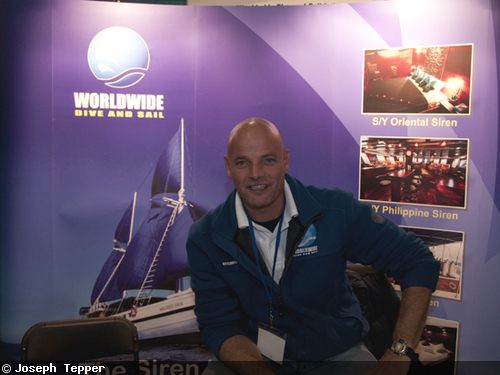 Our friends at Worldwide Dive and Sail seemed busy all weekend, passing out information packets on their remote, tropical destinations- sigh. 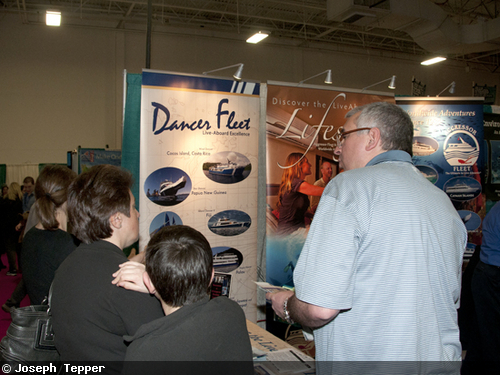 In keeping with the trend in Dive travel booths, the Aggressor spot on the floor was another busy one…. 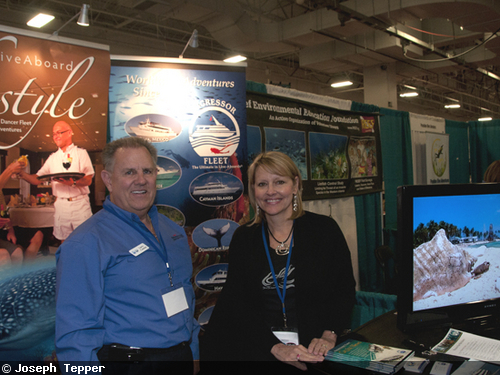 …Not to busy for a phone opportunity with Anne Hanson. 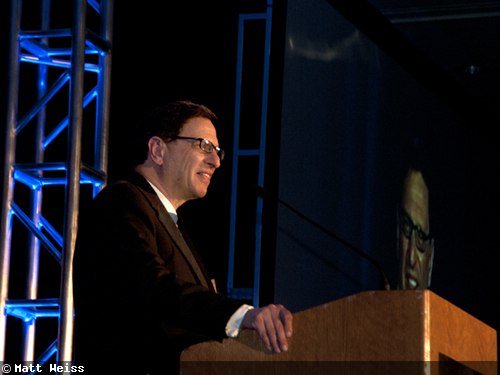 David Doubliet was a fantastic host of the Saturday night film festival, keeping the crowd on the edge of a collective seat in between the films.

Divephotoguide was also proud of its members who found success in the Beneath the Sea photo contest. 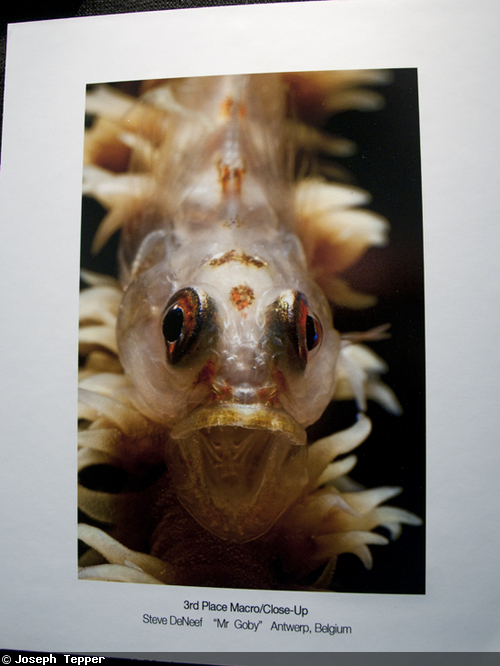 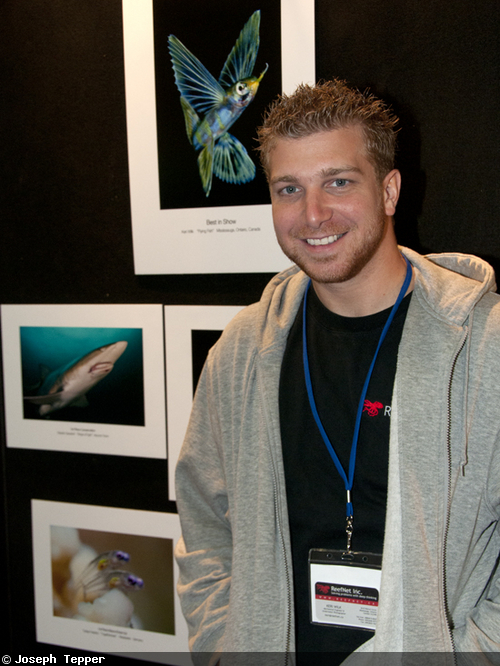 Keri Wilk in front of his best in show, Flying Fish.
Look who else stopped by the DPG booth to say "hi" 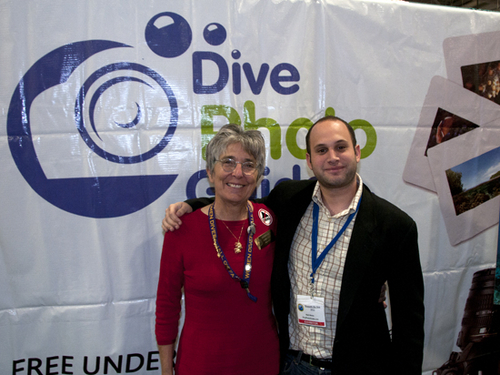 Cathy Church pops by the booth. 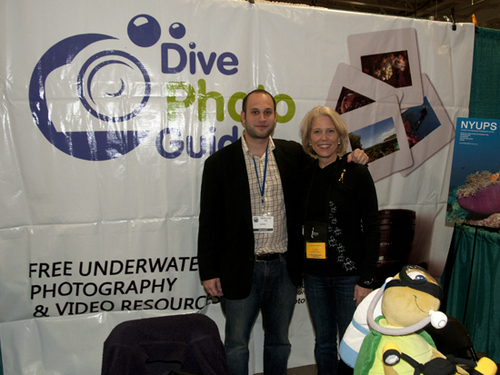 The DPG booth was also graced by Michelle Westmoreland. 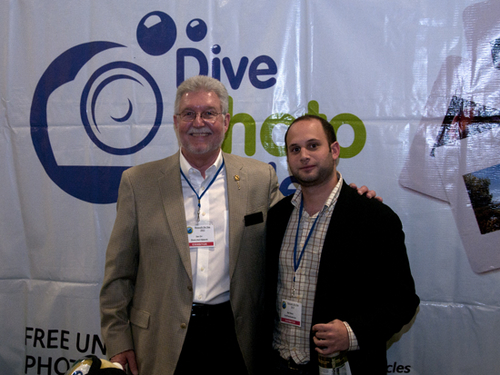 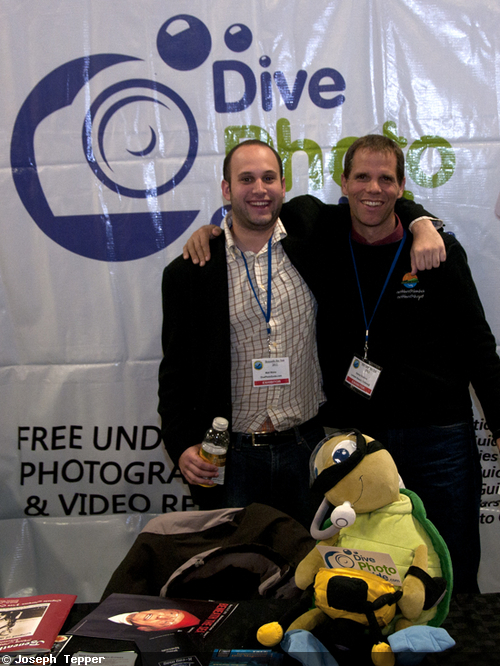 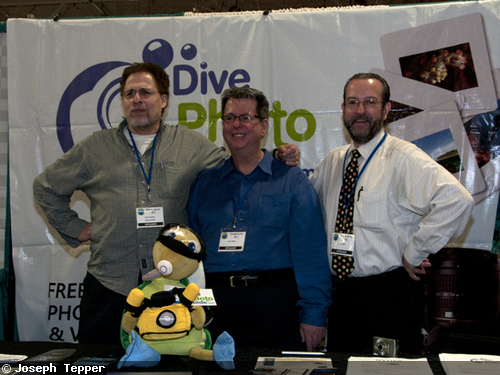 A special thanks to the guys and gals from the New York Underwater Photographic Society who were able to help out at the booth. 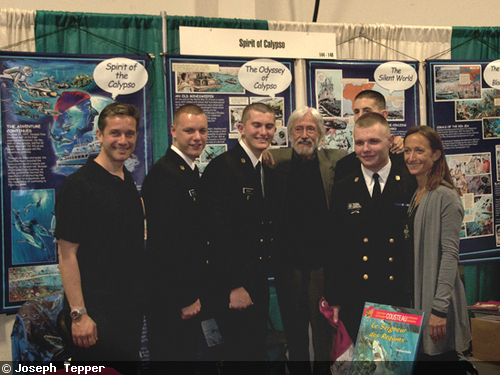 Jean Michel and Celine Cousteau were also around signing books, photos, and whatever most people could get their hands on!
We hope you have enjoyed another installment of DPG’s coverage of the Beneath the Sea show. Until next time,