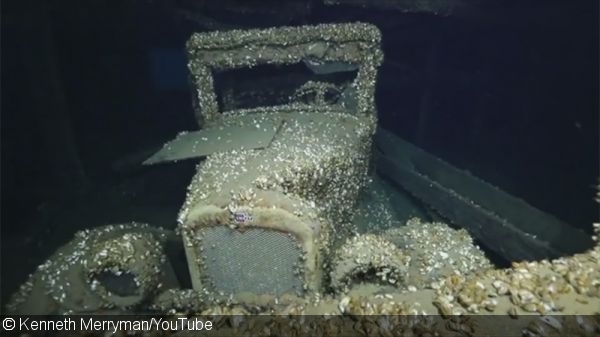 Award-winning photographer, videographer and technical diver Becky Kagan Schott has been invited to shoot the wreck of the Manasoo, which was recently discovered by a group of explorers along the coast of Lake Huron. When it capsized off the Bruce Peninsula 90 years ago, the ship claimed the lives of 16 people.

“It’s a photographer’s dream,” said Schott, owner of the Philadelphia-based Liquid Productions. “The Great Lakes are my favorite place in the world to dive. Pretty much very summer I spend maybe seven or eight weeks visiting different lakes and documenting, diving different shipwrecks.”

The Manasoo wreck has been hailed as one of the finest finds among shipwrecks in the Great Lakes: The vessel’s pilothouse—containing the ship’s wheel and navigation equipment—is intact, and there’s a well-preserved 1927 Chevrolet Coupe on board. The car belonged to one Donald Wallace, a cattleman who was having 115 cows (and one bull) transported from Manitoulin Island to Owen Sound when a storm hit. It is thought that the cows might have shifted to one side, causing the ship to roll—and ultimately swiftly go down.

When she heads to the site next year, Schott will be joining the team who located and dove the wreck—US marine explorers Ken Merryman and Jerry Eliason, and divers Cris Kohl and Greg Hilliard. Said Schott: “I’m very excited to go out with them to shoot some artistic imagery of the shipwreck.”