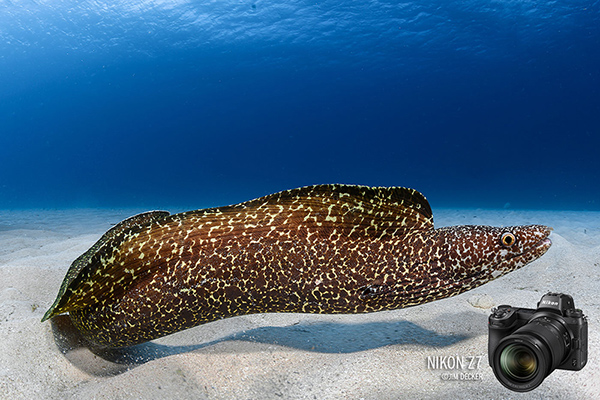 When Nikon released a high-resolution, high-speed full-frame beast of a camera packing a 46MP sensor, 9fps continuous shooting, and 4K video capture from the full-width sensor, serious photographers (and videographers) knew that the Japanese giant meant business. That camera was the D850, and the DSLR has gone on to win praise across the board. (We think it’s awesome, too.)

So, only naturally, expectations have been sky high for the company’s first full-frame mirrorless camera, the Z7, and with specs that very closely follow the D850’s, it seemed nothing short of a “mini-D850” would do. Well, as it turns out, that’s exactly how Backscatter has labeled the Z7 after CEO Jim Decker put the mirrorless wonder through its paces in its latest review.

Testing the camera in Caribbean waters on a range of subjects, from super-macro blennies to wide-angle reef scenes, the Backscatter team concluded that the Z7 “produces the best overall image quality seen yet from a mirrorless camera.” They were also super-impressed with the EVF, opining: “We feel that the EVF on the Nikon Z7 has raised the bar for what we expect from a mirrorless camera electronic viewfinder.” Video output was similarly well received, with the Z7 achieving “great looking” ambient light underwater color, again on par with the D850.

As well as summarizing their findings in the article, alongside Jim’s test images and footage, the review includes a comprehensive video presented by media producer Robin Dodd—which you can also check out below.