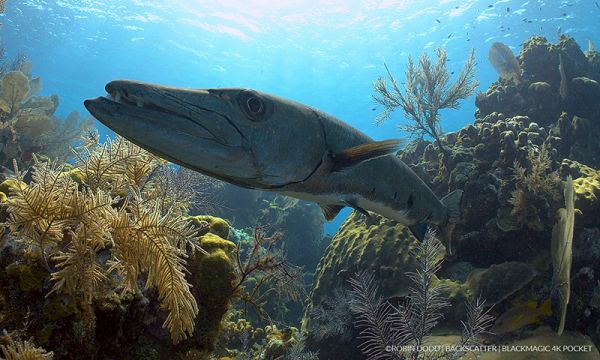 The current Holy Grail of 4K video capture frame rates—if you didn’t know—is 60 frames per second. Only a small handful of consumer cameras achieve the feat, like the $2,000 Panasonic GH5, the $2,500 Panasonic S1 and the $6,000 Canon EOS 1DX II. And, let’s not forget, the $1,300 Blackmagic Design Pocket Cinema 4K—the first thing Backscatter points out in its new review of the Micro Four Thirds camera in Nauticam’s NA-BMPCCII housing.

But playing back your 4K clips at half speed isn’t the only thing that’s great about the “BMPCC4K,” says Backscatter. Among the areas the team considers in their extensive review are the camera’s ability to shoot RAW video as well as ProRes, its impressive low light and ambient light only performance, the affordability of Micro Four Thirds lenses and the wide selection for underwater shooters, and the features of Nauticam’s housing. They also include a detailed discussion on post-production workflows as well as a look at the camera’s shortcomings—and how to work around them.

Ultimately, Backscatter concludes that “this system is insanely affordable for the image quality it produces.” The team declares that the Pocket Cinema 4K produces “hands-down the best video quality among all current 4K 60p SLR and mirrorless cameras”—the only caveat being that “it also requires the most work in post.” In other words, this camera can produce fantastic results, provided you have the time and dedication to get the most out of it.

Check out Backscatter’s test footage below and read the full article here.

Earl Reader wrote:
Thanx for sharing these amazing pics!
You must be logged in to comment.
Support Our Sponsors
Advertise With Us
Newsletter
Travel with us