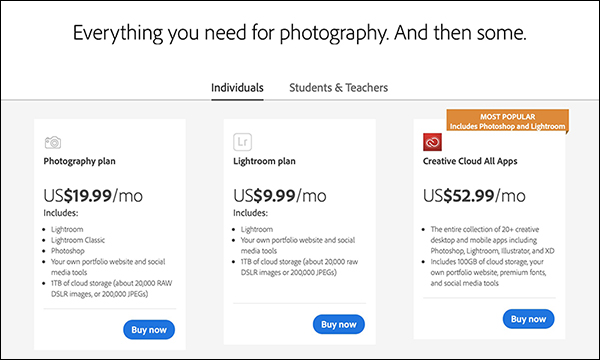 Since moving to the subscription model, Adobe’s Photography Plan has proved very popular: For a modest 10 bucks a month, you get Photoshop, Lightroom (regular and Classic flavors), and 20GB of cloud storage. But it seems that might be about to change: Some would-be customers are instead being presented with a $20/month Photography Plan with increased storage of 1TB. (However, apparently, if you’re one of the affected potential customers, it’s still possible for you to subscribe to the cheaper plan at this point—by contacting Adobe’s customer support directly.)

Adobe says it’s only running a test at this stage, writing in an official statement: “From time to time, we run tests on Adobe.com which cover a range of items, including plan options that may or may not be presented to all visitors to Adobe.com. We are currently running a number of tests on Adobe.com. The plan can be purchased at http://www.adobe.com/go/photo18sptst, via phone at 1-800-585-0774 or via major retailers.”

It remains to be seen whether the change to the more-expensive plan will be scrapped—which isn’t impossible—but you don’t have to be a genius with numbers to realize that the math works in favor of the new price becoming a reality.