"Whale Wisdom - A Mother Humpback's View" By Shawn Heinrichs
By Jason Heller, June 9, 2008 @ 02:00 AM (EST)
A new conservation short film, "Whale Wisdom - A Mother Humpback's View" has just been released by Shawn Heinrichs, an award winning independent filmmaker. The film has been produced in English and Japanese with a Spanish version coming soon. With the International Whaling Commission meetings kicking off later this month in Chile and the recent announcement by certain nations that they are resuming trade in whale meat despite a UN ban, the film seeks to reach a broader audience and encourage them to take a stand for whale conservation. 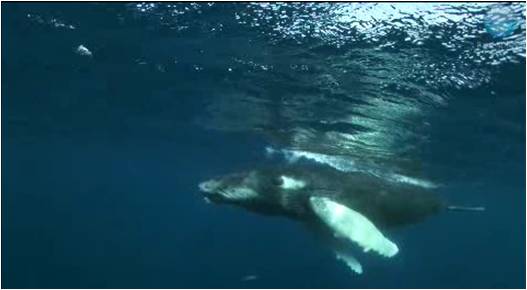 Whale wisdom - a mother humpbacks view
A mother humpback whale rests below while her calf ascends to the surface and explores the wonders of this strange new world. She offers her calf encouragement and assurance, but also warns of dangers to come. She recounts how commercial whaling all but wiped out their species and how even now, over 20 years since the ban on commercial whaling, the killing continues. Will her calf be next?

Though commercial whaling was banned by the IWC in 1986, over 25,000 whales have been commercially hunted since then. This is an incredibly controversial subject and one which often stalls in political, racial and cultural debates. Whale Wisdom transcends these debates and offers a fresh take on the issue, a mother whales perspective. The political and cultural disagreements are not her concern. Her only worry is that her child and their species have a future in the Oceans.
To watch the touching film, visit Shawn's website.

Jeffrey Hartog wrote:
Amazing footage; hope many people get to see this.

Steve Wright wrote:
As someone who has had the pleasure of going to the Silver Banks to view humpback whales in the natural habitat, I can say that Shawn Heinrich did an excellent job in capturing the majesty of these animals and I only hope this film will help bring attention to the need for more actions in whale conservation.
You must be logged in to comment.
Support Our Sponsors
Advertise With Us
Newsletter
Travel with us