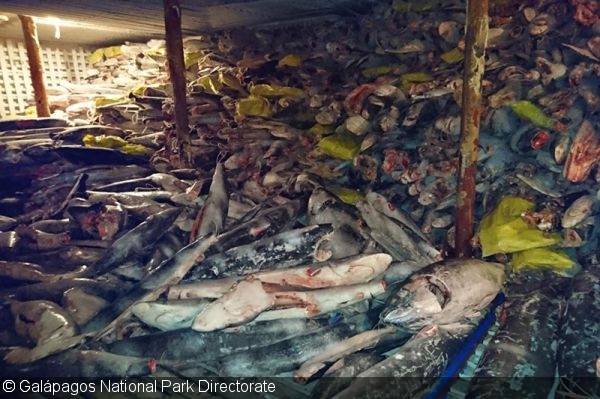 On Sunday, August 13, a Galápagos National Park patrol ship discovered an illegal Chinese fishing vessel in the waters of their protected wildlife sanctuary filled with thousands of dead sharks, their fins cut off to supply the demand for shark fin soup and shark meat throughout Asia. Although the Ecuadorian government recently enacted even stricter policies regarding where fishing can take place and which areas are for research only, much illegal fishing still occurs in the restricted waters because of the huge profits that can be made.

Thankfully, this ship and its crew of 20 were caught and arrested, but that won’t even dent the illegal harvesting of sharks in the area. The park service simply doesn’t have the manpower nor the proper pursuit vessels to enforce the laws to the extent that they need to be enforced. So, the illegal poaching—and the abhorrent practice of killing sharks only for their fins—continues. The capture of this vessel occurred out of sheer luck and the opportune use of a drone that tracked the ship after it was first spotted and suspected of illegal fishing.

On this particular Sunday morning, what the park officers discovered shocked even the most experienced of them, simply because of the sheer number of dead sharks—the ship’s logs indicated 300 tons of them—found on this one ship and the presence of so many endangered scalloped hammerheads and silky sharks. They surmised that the ship they detained was a “mother ship” the purpose of which was to collect the sharks caught by other, smaller, fishing boats in the area, so that those fishermen could remain in the water longer to catch even more sharks. That one mother ship, the Fu Yuan Yu Leng 999, most likely had been collecting the catch from multiple smaller vessels over several days. It’s no wonder that the shark populations continue to decrease worldwide and that 25 percent of the world’s shark species are currently endangered.

Although this crew will face several years in prison if convicted, the huge profits to be made overpower the sanctions put into place to control the practice. Thousands of other ships are out there every day doing the same thing because the demand for these creatures still exists and the profits are so high.

Vefer Vefer wrote:
So scared
You must be logged in to comment.
Support Our Sponsors
Advertise With Us
Newsletter
Travel with us