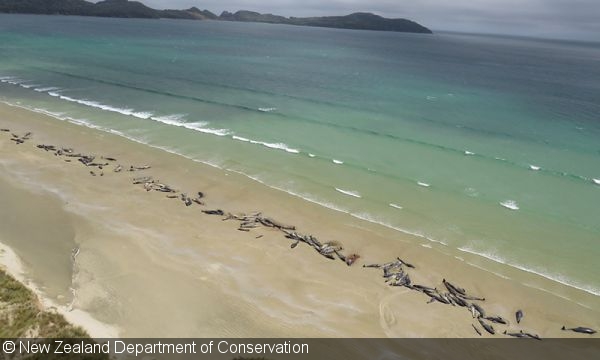 At the weekend, around 145 whales were discovered stranded on a remote beach on Stewart Island, south of New Zealand’s South Island. The beached long-finned pilot whales (Globicephala melas) were found by a hiker, who alerted a Department of Conservation field office, but nearly half of the animals were dead by the time authorities could reach the site. The difficult decision was made to euthanize the remaining whales to put an end to their suffering.

Pilot whales travel in groups of between 20 and 90 individuals, so it’s not uncommon for large numbers to be stranded together, but scientists don’t know why the phenomenon occurs. A popular hypothesis suggests that the whales’ echolocation, which they use to find their prey, loses its effectiveness in shallower coastal waters, and the whales beach themselves inadvertently as they struggle to find their way back to sea. Another possibility is that when one whale becomes stranded, others in the group attempt to help but beach themselves instead.